King Eccellente’s victory is a welcome tonic for the Mauritian after having to endure an extended period on the sidelines, and watch Romantic Warrior win the Hong Kong Cup 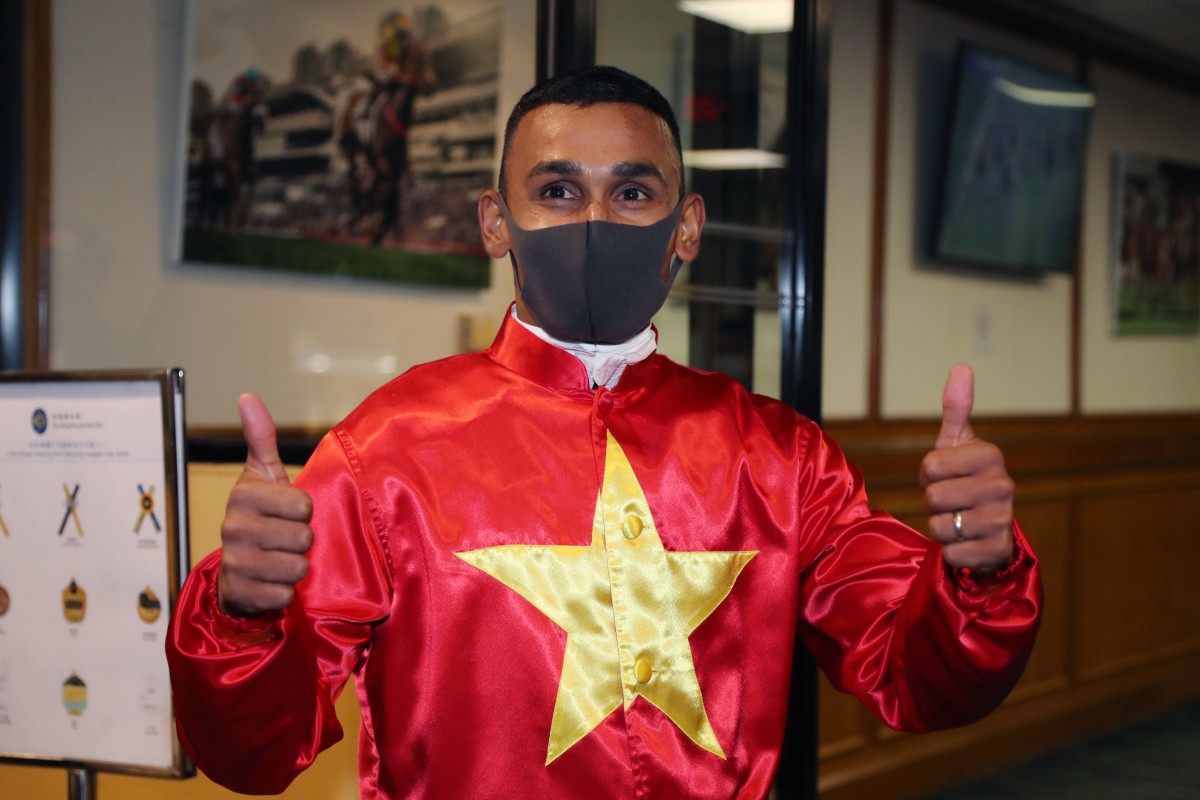 It has been a long three months since Karis Teetan’s treble at Sha Tin on September 18, but finally the Mauritian is a winner again after booting the Douglas Whyte-trained King Eccellente to victory at Happy Valley on Wednesday night.

Sidelined by a thyroid condition that for a time had doctors stumped, Teetan missed 21 meetings before returning at the Valley last Wednesday, and he tasted success with his 15th ride back.

“It feels really good to be back riding and getting a winner. It’s my third meeting, it does take a few rides to get into the momentum again, but I’m grateful for all the support from everybody, especially from Douglas,” Teetan said.

“Since the day I came back he’s been giving me a few horses to get going in the mornings, and of course, he gave me this horse, who was prepped properly. It’s been a tough journey, but I’m just glad to be back now.”

Back in business! 👊@KarisTeetan gets his first win back after a lengthy stint out, scoring atop King Eccellente in the Hong Kong Golf Club Centenary Cup. @DJWhyteTrainer #HappyWednesday | #HKracing pic.twitter.com/J18ce90nQ7

Teetan let King Eccellente travel just off the speed before unleashing the four-year-old down the middle of the track for his first win at start six in the Class Four Hong Kong Golf Club Centenary Cup (1,200m).

“Douglas and his team were confident the horse would run well, and he said to me ‘be positive on the horse, get him into a position and he’ll race with you’. I was surprised he let down so much, and I think it was a very gutsy win,” Teetan said.

King Eccellente’s win could not have come at a better time for Teetan, who was forced to watch on as Romantic Warrior stormed to victory in Sunday’s Group One Hong Kong Cup (2,000m).

Teetan would have been in the saddle if not for his recent absence, and Whyte – a 13-time champion jockey before becoming a trainer – offered some insight into the emotions the 32-year-old would have experienced in recent days.

“It knocks you backwards. Karis has been great, he’s been turning up on race day, and he’s been jovial and very upfront and hardworking,” Whyte said.

“But to watch a horse like that go around who’s a champion, and you know you should have and could have been on him, it’s gut-wrenching. You go home and it honestly knocks you back six days.

“As happy and as bubbly as you are, I don’t care who you are, you go home and you are wrenched. You feel for the guy, but to come out and ride a race like that for me after a weekend where he missed out on a Group One winner, he’s back on track.”

California Deeply skims the rail! The Deep Field 3yo goes back-to-back at the Valley, this time under @LukeFerraris for trainer Tony Cruz! #HappyWednesday | #HKracing pic.twitter.com/uhiag1RNHs

It was Ferraris’ 11th victory of the 2022-23 campaign and despite his recent lull, the 20-year-old is still firmly entrenched in the top 10 in the premiership in just his second Hong Kong season.

Further up the table, Silvestre de Sousa closed the gap on the second-placed Vincent Ho Chak-yiu with a treble, saluting aboard Flash Famous, E Brother and Encountered to move with within two.

Not to be outdone, runaway championship leader Zac Purton landed a treble of his own thanks to wins aboard Act Of Faith, Flying Silver and Beauty Tycoon.

Manfred Man Ka-leung and John Size shared the training honours on the evening, with Man providing De Sousa with the second and third legs of his treble, while Size combined with Purton to salute with Act Of Faith and Beauty Tycoon.