Hong Kong’s best three horses are set to lock horns in the Group One Stewards’ Cup (1,600m) on January 29 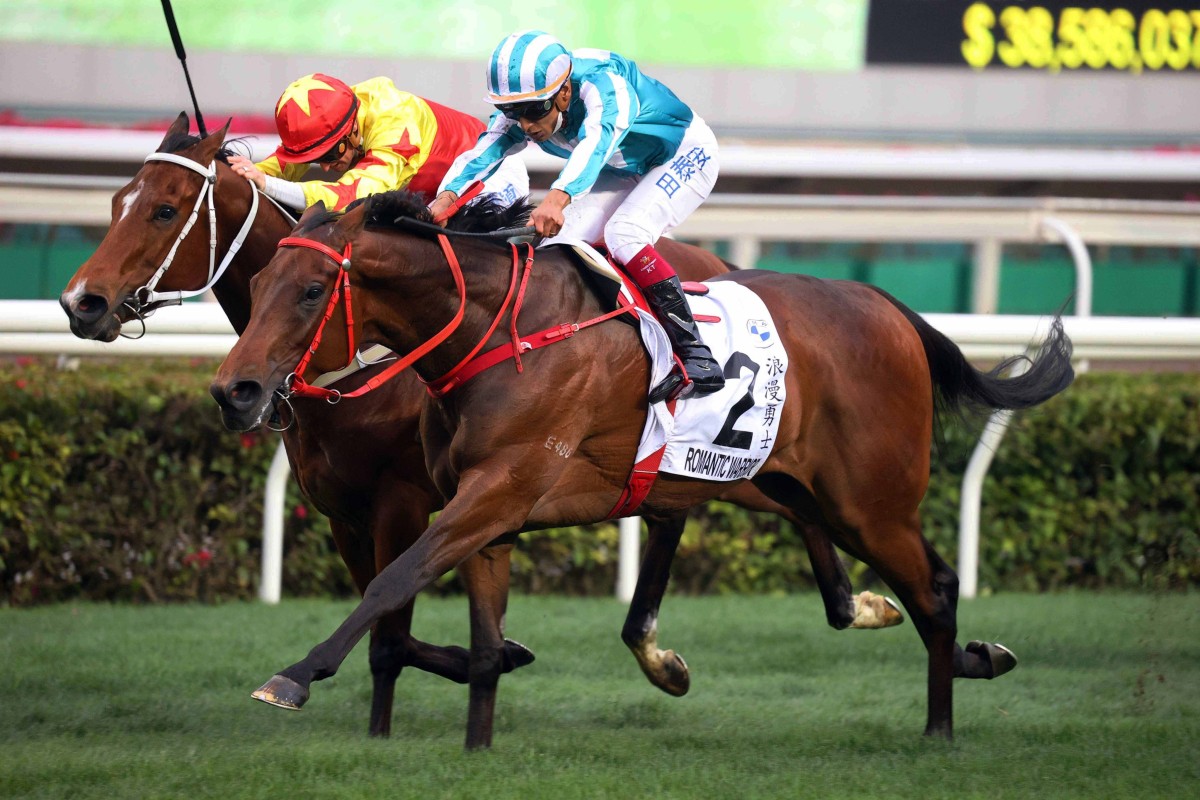 California Spangle (inside) and Romantic Warrior duke it out in the Hong Kong Derby. Photo: HKJC

With Danny Shum Chap-shing declaring a desire to target the Triple Crown with his Group One Hong Kong Cup (2,000m) champion Romantic Warrior, and superstar milers Golden Sixty and California Spangle on a natural path to the race, next month’s Group One Stewards’ Cup (1,600m) could be one of the best contests Sha Tin has ever seen.

Zac Purton was in the saddle for California Spangle’s Group One Hong Kong Mile win on the weekend, with the four-year-old getting the better of Golden Sixty for the first time at the third attempt.

While Hugh Bowman’s mid-race move aboard Beauty Joy meant the race shape was different to front runner California Spangle and the fast-finishing Golden Sixty’s previous clashes, it was still the six-time Group One winner tearing after the new kid on the block in the closing stages.

After finally getting the better of two-time Horse of the Year Golden Sixty with California Spangle, the presence of Romantic Warrior means Purton will have a new challenge on his hands altogether.

“Whether Beauty Joy is ridden the same way or not – I’m not sure what will happen there – we’re going to have Romantic Warrior in the race,” Purton said.

“So not only does that make you go, ‘all right, you can’t sit and outsprint Golden Sixty, and then if you make it a staying test, Romantic Warrior runs over the top of both of us’.

“Romantic Warrior is just going to be in the best spot, isn’t he? It’s going to be a great race, with the three best horses in Hong Kong going at it. It’s something we haven’t seen in a while.”

Harry Bentley is hoping to ride at Sha Tin this Sunday but won’t know for sure until later in the week after his turn on the Jockey Club’s Covid-19 merry-go-round.

By Tuesday afternoon, Bentley was testing positive and was stood down from his six rides at Happy Valley on Wednesday night, none of which placed.

Bentley, who also had Covid during the off-season, confirmed he is asymptomatic and will be fighting fit should he be cleared to take his rides aboard Double Show and Kilindini this weekend.

The Jockey Club has created some space around the Tropical Storm Nalgae replacement meeting, moving the Happy Valley meeting on July 5 back a day to July 6.

By scheduling a Sha Tin night meeting on Monday, July 3 to make up for the Happy Valley meeting lost to weather on November 2, the Jockey Club created a log jam of three fixtures in five days, but now there will be two clear days before the July 6 card.