Line Seeker came on strongly with one wider out after switching off from the widest gate to run down Key Witness in the final few strides for a sixth win from 12 starts. He was a forgotten runner after a dull run on the dirt last start but is clearly a quality sprinter on the turf. Key Witness dashed to the front 150m out after being posted four deep without cover around midfield from a wide gate and was just touched off in the end carrying equal top weight. He has the ability to get away with a race in this grade. New Asia Sunrise stayed on well for a placing following a box-seat run. The extra seven pounds following a win was the difference in the end. Odds-on favourite Mr Stunning made his run amongst the back markers following a sluggish break but put in big strides late when extricating himself out of heavy traffic at the 200m to just miss a placing.

MR STUNNING lifted its front feet off the ground as the start was effected and began awkwardly, resulting in the horse losing ground.

NEW ASIA SUNRISE shifted in at the start, resulting in SECRET COMMAND being taken in onto HAPPY YEAH YEAH, both of which were hampered.

MYTHICAL EMPEROR and MARVEL TRIBE bumped at the start.

MYTHICAL EMPEROR then shifted out and inconvenienced LUCKY EVER.

YOU READ MY MIND lost its right front plate on jumping.

From wide barriers, DUKEDOM and LINE SEEKER were steadied in the early stages and shifted across behind runners.

When being steadied after the 1000 Metres, MALMSTEEN proved very difficult to settle and got its head up on a number of occasions.

Making the turn after the 900 Metres, LUCKY EVER commenced to hang out badly, resulting in LITTERATEUR being severely hampered when taken very wide.

After this, LUCKY EVER continued to hang out badly.

Before being allowed to race again, LUCKY EVER will be required to perform satisfactorily in a barrier trial around a bend.

Near the 550 Metres, HAPPY YEAH YEAH was checked away from the heels of NEW ASIA SUNRISE.

Passing the 400 Metres, MR STUNNING (J Moreira) improved into tight running between YOU READ MY MIND and MYTHICAL EMPEROR which was awkwardly placed inside the heels of KEY WITNESS.

MR STUNNING was then held up for clear running when continuing to race tight between those horses and near the 350 Metres became unbalanced when momentarily crowded for room inside MYTHICAL EMPEROR which continued to race tight inside KEY WITNESS and YOU READ MY MIND which shifted out marginally when commencing to give ground.

Passing the 300 Metres, MR STUNNING was shifted to the outside of MYTHICAL EMPEROR to obtain clear running.

When MR STUNNING shifted out, DUKEDOM was hampered and then shifted out away from MR STUNNING, resulting in LITTERATEUR being bumped and taken out.

J Moreira was advised to exercise more care when shifting ground in future.

Throughout the race, MARVEL TRIBE travelled wide and without cover.

For the majority of the race, KEY WITNESS also travelled wide and without cover.

A veterinary inspection of LUCKY EVER immediately following the race did not show any significant findings.

G Mosse subsequently pleaded guilty to a charge of Rule 12(33), the particulars of the charge being that by riding track work at Sha Tin Racecourse on Sunday, 13 November 2016, he did fail to obey a proper direction of an Official, such direction being that he was not to ride track work until the day of JOYFUL TRINITY's final piece of fast work, that day ultimately being Thursday, 17 November 2016.

In the circumstances, the Stewards believed that the appropriate penalty was for G Mosse to be fined the sum of $20,000.

16 November 2016 Happy Valley Racemeeting - Race 7 (192) The Stewards today afforded K Teetan, the rider of DYNAMISM, the opportunity to explain his riding after the 900 Metres.

He said in the early and middle stages of the race DYNAMISM travelled keenly and passing the 1000 Metres he was racing behind DIVINE BOY, inside the heels of GREEN DISPATCH and in advance of AMBITIOUS CHAMPION which was racing to his outside.

He said near the 900 Metres DYNAMISM continued to travel keenly and as he did not believe that DIVINE BOY would take him into the race and given that AMBITIOUS CHAMPION was racing behind DYNAMISM, he elected to shift out so that DYNAMISM was positioned to take an outside run in the Straight.

He said when he shifted away from the rail, this allowed WINNIE'S HONEY the opportunity to improve to the inside of DYNAMISM which by this time was racing in a one-off position behind GREEN DISPATCH.

He said approaching the 600 Metres GREEN DISPATCH commenced to come under pressure which allowed WINNIE'S HONEY the opportunity to shift that horse out after the 500 Metres.

He added he did not foresee GREEN DISPATCH would come off the bridle at this time and this was the reason he committed himself to shifting out behind that horse rather than improving to the inside of GREEN DISPATCH and possibly not being able to get to the outside of runners.

K Teetan was advised that his explanation would be reported.

Race 4: S de Sousa (ALLCASH): $22,500 for careless riding for some distance approaching and passing the 100 Metres.

Severe Reprimand Race 9: M Chadwick (PAKISTAN STAR) for shifting out at the entrance to the Straight.

Warnings Race 7: B Prebble (CONTENTMENT) for shifting out near the 250 Metres.

Suspensions Race 4: S de Sousa (ALLCASH) for careless riding for some distance approaching and passing the 100 Metres (from 14 December 2016 until 18 December 2016 on which day he may resume race riding - 2 Hong Kong racedays).

HKIR: Watch the last start of every Hong Kong Mile runner, including Laws Of Indices

HKIR: Watch the last start of every Hong Kong Sprint runner, including Gendarme 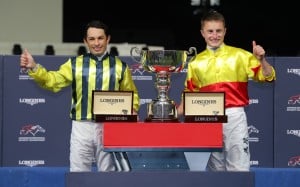