Sky Gem never looked back to win eased down 100m out in class-record time after being roused up from the back 900m out to find the front 650m out. It was a terrific ride by Karis Teetan and he was well rated after placing off much higher marks earlier in the campaign. Wealthy Employee came from midfield to grab second 200m out in his best run to date. He was suited by a rise in trip and return to the Valley. The Joy Of Giving ran on steadily for a placing following a one-off run better than midfield. He has been racing consistently of late without winning. Early favourite Hay Run kept on one-paced for fourth following a pace-stalking run outside President Star. It was another honest performance over this Valley trip. Speed Force just held his ground after a prominent run on the fence. He's still in search of a bottom. Young Glory ran on without menacing from behind midfield despite a return to his favourite trip. He's not going well at the moment. Punted late, President Star was gone mid-stretch dictating the pace. He didn't get the trip. Post-time favourite Apolar Warrior was gone a long way out after getting posted without cover behind midfield. He had an excuse.

SPEED FORCE began awkwardly and then was steadied away from the heels of PRESIDENT STAR which shifted out on jumping.

From the outside barrier, SKY GEM was shifted across behind runners in the early stages.

Making the turn near the 2100 Metres, APOLAR WARRIOR and CHEERFUL STAR raced tight.

Passing the 2100 Metres, SKY GEM was awkwardly placed close to the heels of GREAT SMART and after improving to the inside of that horse then raced tight for a short distance.

After the 2100 Metres, FORTUNE PATROL got its head up when awkwardly placed inside the heels of CHEERFUL STAR.

Approaching the 900 Metres, CHEERFUL STAR was awkwardly placed close to the heels of GREAT SMART when being shifted to the outside of that horse.

Approaching and passing the 800 Metres, HAY RUN travelled keenly outside the lead.

Passing the 300 Metres, FORTUNE PATROL was awkwardly placed outside the heels of CHEERFUL STAR.

FORTUNE PATROL then improved into tight running between CHEERFUL STAR and SPEED TO EXCEED.

PRESIDENT STAR lost its left front plate after the race.

After the race, an endoscopic examination was conducted on WEALTHY EMPLOYEE at the request of Trainer K H Ting.

Before being allowed to race again, WEALTHY EMPLOYEE will be subjected to an official veterinary examination.

After the race, J Moreira stated that CHEERFUL STAR got further back in the field than had been intended in the early stages.

He said when the pace of the race increased near the 1000 Metres, CHEERFUL STAR initially adapted well to the change in tempo and commenced to improve its position along the Back Straight.

He said however that when the increased pace was sustained, CHEERFUL STAR came off the bit prior to the 600 Metres and then despite being ridden along failed to finish off the race.

A veterinary inspection of CHEERFUL STAR immediately following the race did not show any significant findings.

When questioned regarding the disappointing performance of PRESIDENT STAR, Z Purton stated that, in his opinion, the horse did not see out the distance of tonight's race at its first time of asking.

He said PRESIDENT STAR travelled satisfactorily in the early and middle stages, however, was unable to quicken passing the 700 Metres when SKY GEM improved into the lead.

He said PRESIDENT STAR immediately came off the bridle and after initially staying on one-paced until the Home Turn then gave ground in the Straight and failed to finish off the race.

A veterinary inspection of PRESIDENT STAR immediately following the race including an endoscopic examination showed a substantial amount of blood in the horse's trachea.

Before being allowed to race again, PRESIDENT STAR will be subjected to an official veterinary examination.

When questioned regarding the disappointing performance of APOLAR WARRIOR, A Badel stated that after shifting APOLAR WARRIOR behind runners in the early stages as instructed, his mount travelled fairly in the middle stages.

He said when SKY GEM, the horse he had been following, was ridden along to go forward passing the 1000 Metres, he was unable to quicken with that horse and improve its position despite riding his mount along.

He said after this APOLAR WARRIOR came off the bridle and was not responding to his riding passing the 500 Metres.

He added, despite being placed under heavy pressure, APOLAR WARRIOR gave ground and then did not finish off the race.

A veterinary inspection of APOLAR WARRIOR immediately following the race did not show any significant findings.

The performance of APOLAR WARRIOR, favourite for finished tailed out, was considered unacceptable.

Before being allowed to race again, APOLAR WARRIOR will be required to perform to the satisfaction of the Stewards in a barrier trial and be subjected to an official veterinary examination. 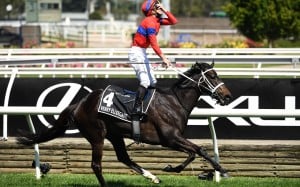