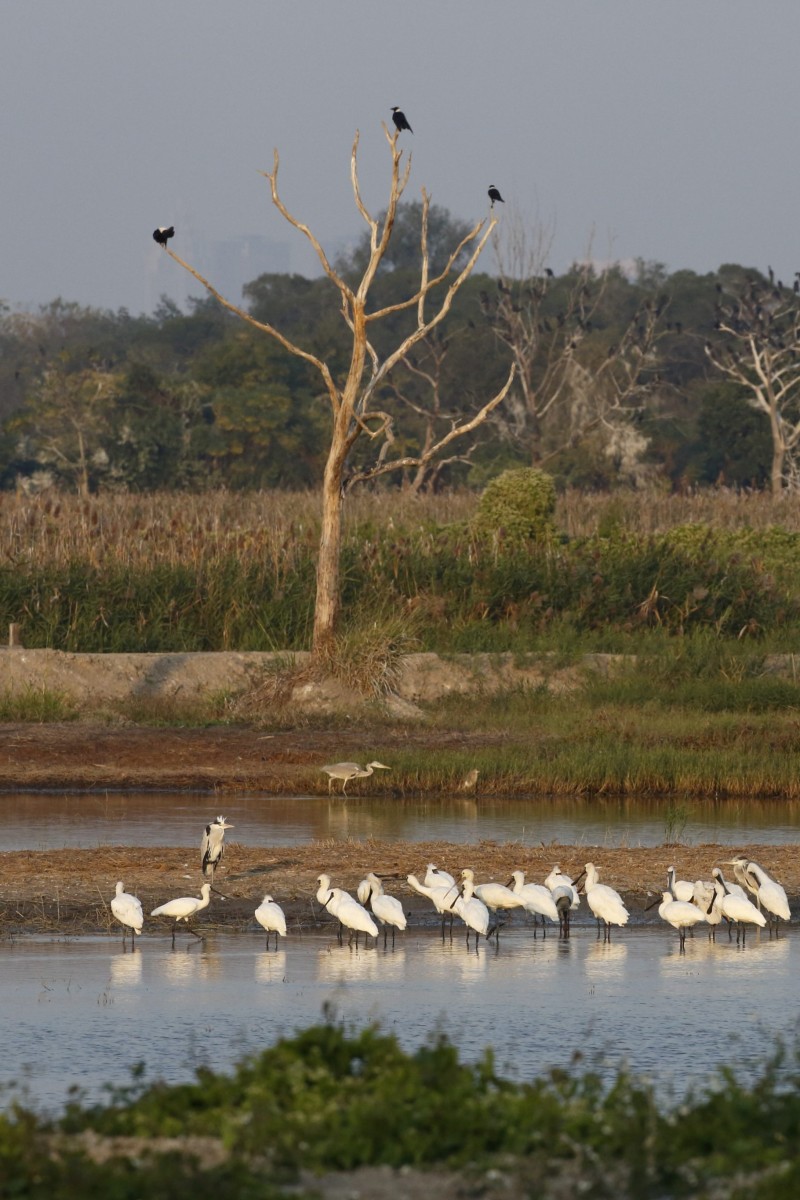 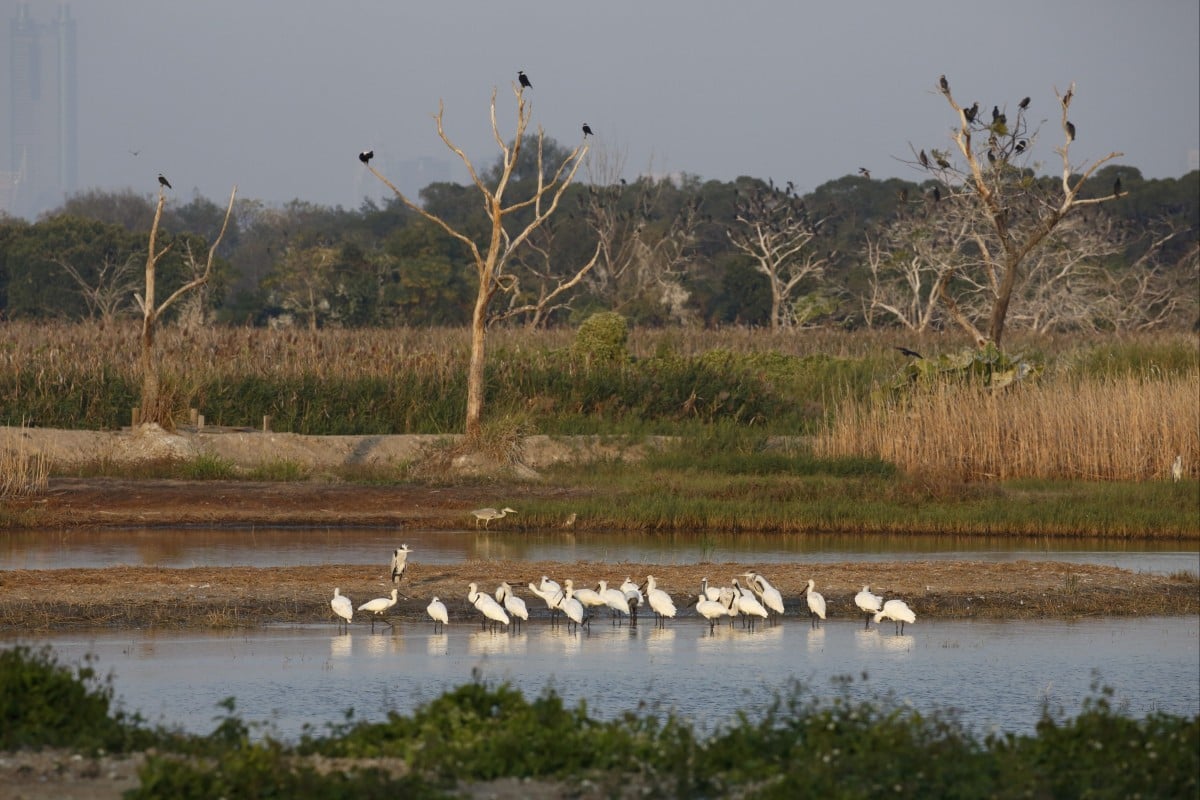 A green group representative says mitigation wetlands are not enough to help birds that depend on these habitats. Photo: CWH

A green group has raised concerns about a project brief published by the MTR Corporation in June. The brief acknowledged that the construction of the new Northern Link line would damage wetlands in the area.

The Northern Link is a 10.7km railway line that will connect the western New Territories and the mainland Chinese border. It will link Kam Sheung Road station on the Tuen Ma Line with the new Kwu Tung station via stops in San Tin, Ngau Tam Mei and Au Tau.

Among the possible outcomes listed in the document was the potential loss of existing man-made wetland habitats in Kam Tin. The proposed station at San Tin would also affect marshy agricultural lands at Shek Wu Wai. There, farms grow flowers and vegetables. It is also a habitat for common wetland-dependent birds such as kingfishers, small ardeids and common shorebirds.

Another area which will be affected is the Sha Po marsh which supports a damselfly species, the four-spot midget, that is at risk of future population loss.

The MTR Corp said it would make detailed assessments of the effects of the Northern Link as part of its environmental impact assessment. It added that it would propose mitigation measures if needed.

But the Conservancy Association said the Northern Link project should not repeat the previous strategy of creating artificial wetlands to make up for the loss of natural habitats.

Professor Nora Tam Fung-yee is deputy chairwoman of the Advisory Council on the Environment, which vets environmental impact reports. Tam noted that mitigation should be seen as a last-resort conservation option.

“Of course the best thing is to avoid touching those areas. But we must also balance environmental protection and development,” she said.

“Mitigation is better than doing nothing; it is the option of last resort when the development cannot be avoided, little can be done to minimise the damage, and there are no alternatives that offer a better solution.” Staff writer

The Conservancy Association has cautioned against creating artificial wetlands to replace natural wildlife habitats, saying past efforts at mitigating the damage done by development have proved unsatisfactory.

Peter Li Siu-man, senior campaign manager for the Conservancy Association, said such an outcome would be unacceptable.

“Giving up compensation wetlands is an incorrect approach. I worry that it will become a trend to surrender mitigation wetlands and create new ones to replace them, leading to a vicious cycle of destruction,” he said.

The mitigation wetland habitats in Kam Tin were originally created to compensate for the wetlands that were destroyed in the early 2000s during the construction of the West Rail line. Photo: May Tse

In the early 2000s, the Kowloon-Canton Railway Corporation – whose lines are now operated by the MTR Corporation – created 12 artificial wetland sites. This was done to compensate for 12 hectares of natural wetlands between Kam Tin and Pat Heung in Yuen Long that were destroyed during the construction of the West Rail line.

The Conservancy Association found that while some of the earlier sites were still functioning as wetlands, others were in bad shape. Li noted that the man-made wetland parcels were disjointed and small. Some were withering in the shade of the rail viaduct, which blocked the flight path of birds that depended on the habitats.

“[The MTR Corp] just looked at the numbers and pieced together parcels of land for compensation,” Li said. “Now there are barely any birds because the parcels are so fragmented. Animals need a large area to forage and move around.”

Li said he had seen more than 100 birds at only one of the mitigation wetland parcels, an abandoned river bend located near some fish ponds. At other parcels closer to the West Rail line, there were only a few birds, and sometimes none at all.

In addition, two of the parcels had been significantly affected by work on the residential development at Kam Tin South. To compensate for that loss, yet another mitigation wetland parcel was created in 2019.

Li said the fate of the West Rail line mitigation wetlands was an example of why the proposed route of the Northern Link should be reconsidered.

“This is not the way to conserve wetlands,” he said. “The best way is to avoid them, not to destroy them and then recreate some nearby.” Staff writer

In Hong Kong, 15 green groups have accused authorities of skipping a strategic environmental assessment of a plan to create artificial islands off Lantau Island.

Last month, the groups called on the Environmental Protection Department (EPD) to “act as a gatekeeper” and reject three project profiles that they said the government had rushed through. The profiles give details related to the Lantau Tomorrow Vision land-reclamation plan.

Approving the three profiles could downplay the potential environmental impact of the Lantau Tomorrow Vision as a whole, the green groups argued.

“For such a large-scale reclamation project, we believe the government should ... go through all the steps,” said Edwin Lau Che-feng, founder of The Green Earth.

Lau, a former member of the Advisory Council on the Environment, said the government should first complete the Lantau Tomorrow Vision’s 42-month feasibility study – which began in June this year – to determine whether it is possible to proceed with the project.

“If they go ahead as planned, it will set a very bad precedent for any future projects,” he said.

Viena Mak Hei-man, vice-chairwoman of the Hong Kong Dolphin Conservation Society, said past environmental impact assessment reports had underestimated the impact on marine ecology. The proposed mitigation measures – such as marine parks to compensate for habitat loss – were not effective.

Mak noted that Chinese white dolphin numbers in northern Lantau plummeted after construction on the Hong Kong-Zhuhai-Macau Bridge began in 2011, and warned of similar consequences.

Greenpeace East Asia campaigner Chan Hall-sion said it would be difficult to assess the environmental impact of the Lantau Tomorrow Vision without adequate information.

“The [EPD] has the responsibility to act as a gatekeeper to ensure that development does not come at the expense of environmental protection,” Chan said. Staff writer