Leading trainer thinks he has a classic contender in waiting after impressive victory over 1,600m 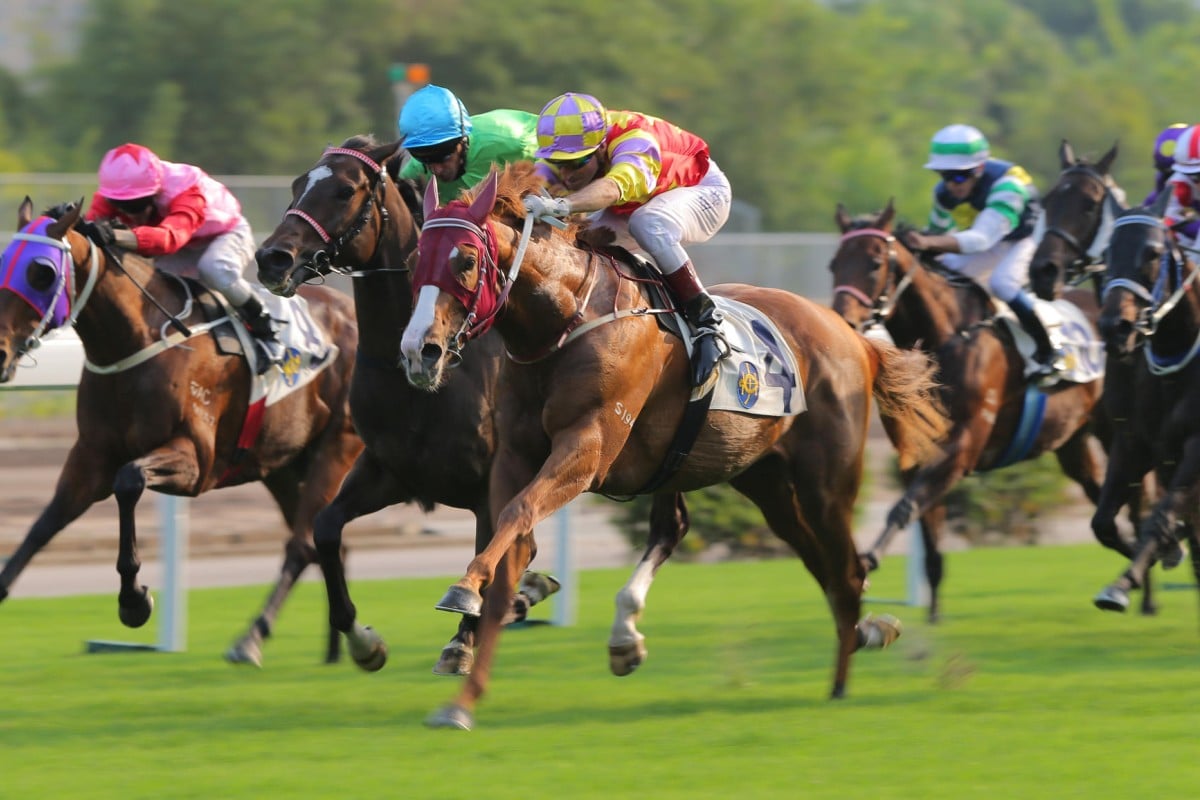 Selkirk Star scores impressively for Gerald Mosse to win the Class Three event over 1,600m at Sha Tin and mark himself as a Hong Kong Derby prospect. Photo: Kenneth Chan 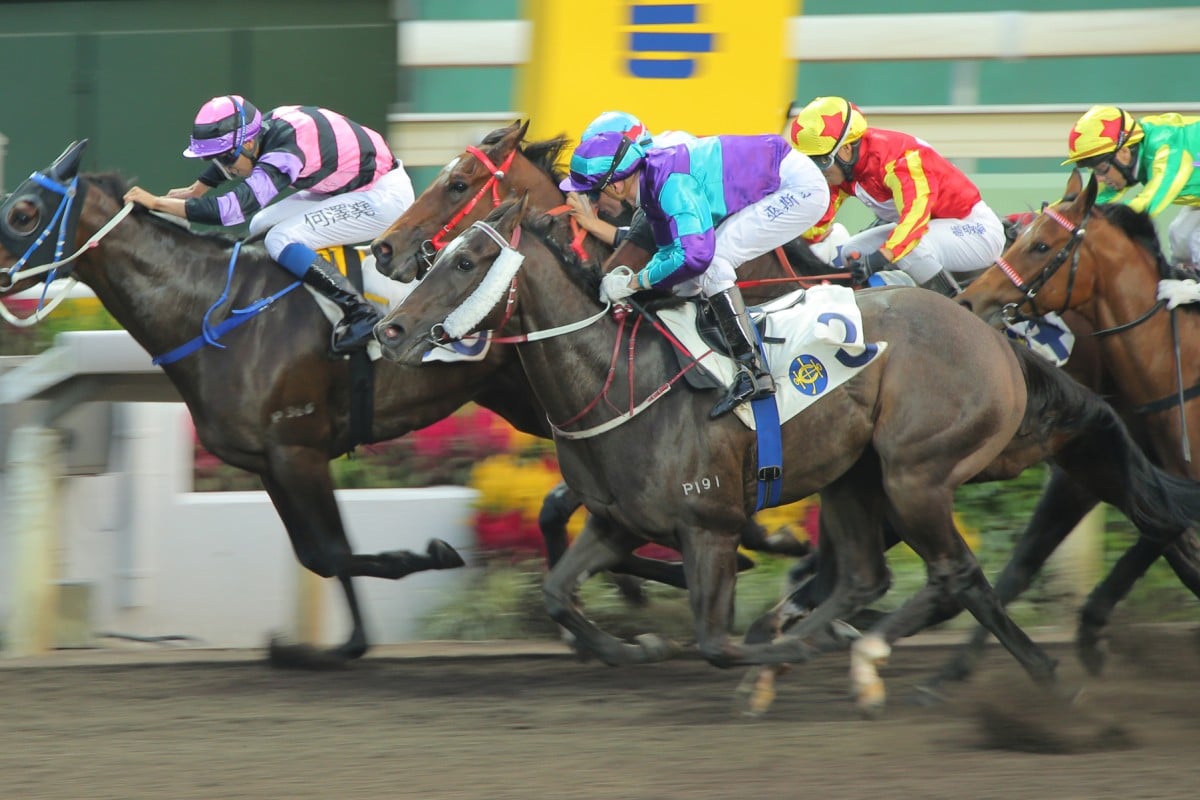 Exciting Dream just gets up on the outside to grab the heavily backed favourite Domineer.

There may still be more than four months until the Hong Kong Derby, but four-time winning trainer John Moore began to reveal his hand yesterday with Selkirk Star the first cab off the rank.

Moore combined with French jockey Gerald Mosse for two wins, with Selkirk Star and Exciting Dream, and the former had the trainer eyeing off the four-year-old classic after he swept down the centre of the track from near the tail of the field in the 1,600m Class Three.

"The Derby is definitely in the pipeline for Selkirk Star - even 1,600m is a bit on the short side for him," Moore said.

The three-year-old, who raced as Good Old Boy Lukey in England, arrived in Hong Kong undefeated from three starts, including the Group Two Superlative Stakes at Newmarket last July. However, he has been kept to shorter trips by Moore as he has allowed the horse to acclimatise, and the horse remained unplaced until his first run over a mile yesterday. 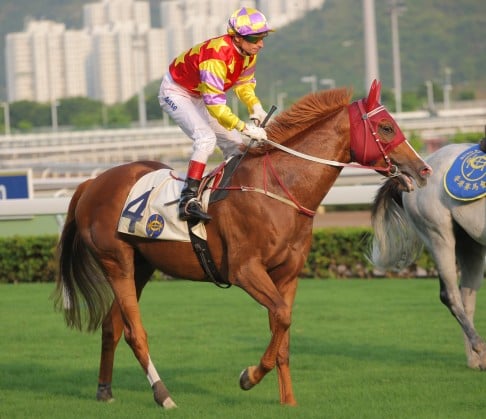 "Patience pays off with the European imports, and here's another one slowly getting there," he said. "He still has plenty of improvement in him and he's still an entire."

"He'll have a run over a mile or 1,800m next time out, maybe in a month or six weeks, because I'm spreading his runs out with the Derby still a long way off. But he's definitely one of my leading contenders - he was bought for it, and being by Selkirk out of a Pivotal mare, he just wants 2,000m."

He's definitely one of my leading [Hong Kong Derby] contenders - he was bought for it, and being by Selkirk out of a Pivotal mare, he just wants 2,000m
John Moore

Selkirk Star would give owner Cheng Keung-fai back-to-back Derby wins after taking out last season's feature with Designs On Rome, and Mosse believes the horse is heading the right way at this early stage.

"I like him a lot," said Mosse. "He is a lovely animal and I was happy with that but I think we can get him even better. He looks like he is starting to acclimatise and he gave me a lovely feeling."

"Of course, today was not a Derby field, but he is coming along the right way, he will keep improving and I do think the longer he goes the better he will be."

An hour later, Moore may have unearthed a surprise Hong Kong Sprint contender in yesterday's Chinese Recreation Club Challenge Cup (1,200m) on the dirt after Exciting Dream came with a wet sail to nose out the heavily backed favourite, Caspar Fownes-trained Domineer.

Moore already has the likes of Sterling City, Charles The Great and Frederick Engels pointed towards the international sprint, but suggested there were shades of his shock 2008 winner Inspiration about Exciting Dream, who won off a rating of 101 at his first try on the all-weather track yesterday.

"I'll go back and have a look at the programme now, but we might run him in the Jockey Club Sprint next," Moore said. "We might take our chances and see what happens. He'll be rated about right to get a run now, about 106 or 107, and Inspiration was rated lower when he won the Hong Kong Sprint, so we might end up there in December."

Inspiration won the Hong Kong Sprint at 66-1 in 2008 rated 104 and snuck into the big races off the back of a Happy Valley Class Two win early in the season. 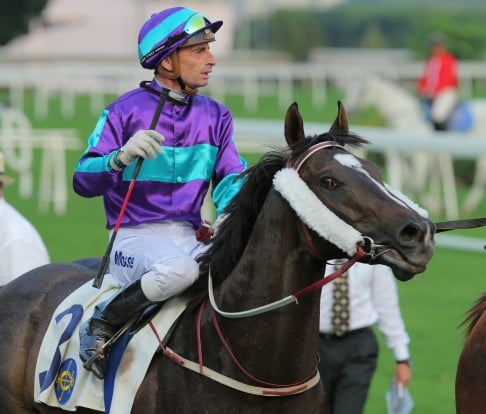 However, Mosse was quick to urge caution as the horse prepares to jump from Class Two into a Group Two at set weights: "He was brave today and just won, but the Sprint trial [the Jockey Club Sprint] would be a big jump up in class for him."

Moore said he had not avoided the dirt with Exciting Dream, but it had been a case of right race, right time.

"There have never been any doubts about him handling the dirt," he said. "I'd just forgotten about ever putting him on it."

"Of course, now there are no races for him on the dirt so it was a short-lived experiment, but it worked out today."