Joao Moreira gives a fist-pump as Joyful Trinity runs over the top of his rivals in the Group Three Celebration Cup. Photos: Kenneth Chan

Somehow big-spending trainer John Moore seems to have unearthed a diamond in Joyful Trinity and the Irish-bred import is now on target for the big races after a convincing win in the Group Three Celebration Cup.

Joyful Trinity arrived on a rating of 88, courtesy of wins at Listed and Group Three level in France for his former trainer, but, after a steady start, the stylish four-year-old now has the upcoming Group Two mile races on the agenda and Moore is even talking up the Group One Hong Kong Mile in December as a possibility.

“Getting a horse off Andre Fabre like this, of that type and with that ability, that’s amazing,” a delighted Moore said after the bottomweight smashed apart a quality field with some eye-catching acceleration under Joao Moreira. 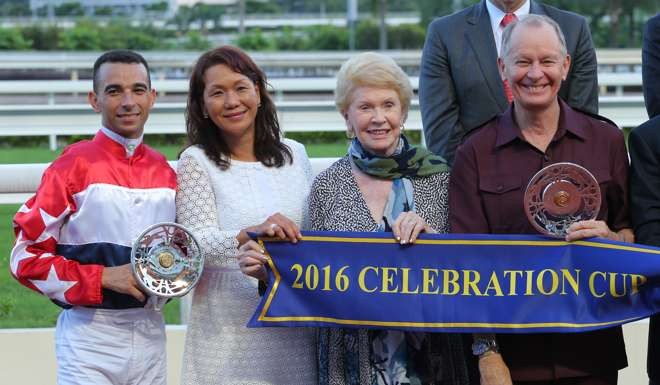 Joyful Trinity’s win didn’t just look visually spectacular – as he left some quality horses looking flat-footed, he did it on the clock too, an overall time of 1.21.11 seconds impressing his trainer.

“After that run and running that time I would have to say that he’s a horse with Hong Kong Mile potential,” Moore said.

“I know the top ones were giving him 18 or 19 pounds but he did show that usual turn of foot that he has and it was lightning fast today. He won very impressively.

“He’ll go in against them in the Sha Tin Trophy on the 23rd and he’s going to get towards meeting them at level [weights] in the [Jockey Club Mile] in November, and then he’ll have to prove himself.

“He’s a horse on the climb and it’s great to pick up these handicaps with horses that have come into Hong Kong from overseas, these races give them confidence and they can build into those level weights races.”

Moreira was also raving about Joyful Trinity’s ability to switch on the afterburners, but was more cautious with predictions about the gelding’s ultimate ceiling, agreeing that the true test will come under those set-weights conditions Moore mentioned. 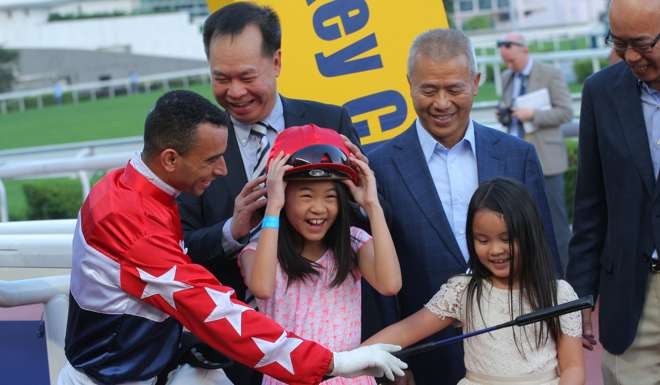 “I agree that he really does have a great turn of foot – and if he is capable of doing that with 126 pounds then he will be capable at the top level,” Moreira said.

Those behind Joyful Trinity were may have been hampered by big weights, but still impressing as they found the line well with a view to the mile races, runner-up Beauty Only perhaps the best from a future point of view.

“He ran well, but it’s never easy carrying those weights against the younger and more progressive horses,” jockey Zac Purton said after Beauty Only finished just ahead of stablemates Beauty Flame and Romantic Touch.

Last year’s winner Contentment, carrying 18 more pounds than 12 months ago, got a pass mark from jockey Brett Prebble for his fifth.

“The winner with the light weight sprinted very quickly and my horse just got stationed with that weight,” he said.