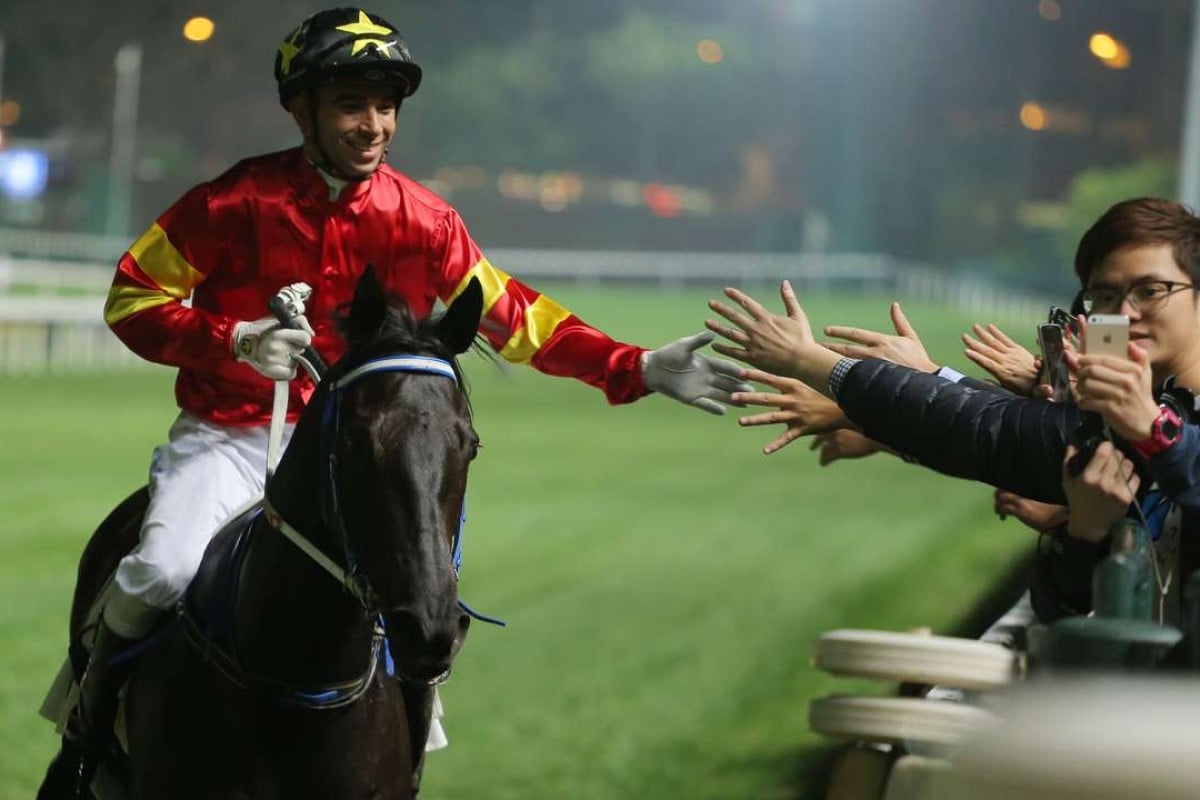 Joao Moreira poses for a selfie with a fan after winning aboard Marvel Hero at Happy Valley on Wednesday night. Photos: Kenneth Chan

Marvel Hero burst into group race calculations with a big Happy Valley Vase win on Wednesday night and left trainer Caspar Fownes reflecting on the “blessing and curse” of having yet another course specialist in his stable.

Fownes compared Marvel Hero to his former “Happy Valley kings” Rainbow Chic and Noble Conqueror after the five-year-old put his rating firmly into triple figures with an emphatic four-and-a-half-length victory.

“He just treated them with contempt there, he is like me, he loves the Valley,” Fownes said via phone from Dubai, where he is preparing Dundonnell for Saturday’s Group One Golden Shaheen at Meydan.

Rainbow Chic won the Happy Valley Vase on three straight occasions for Fownes, while Noble Conqueror was even better at the track, clinching 10 races there, including three Class Ones.

Yet both horses struggled to bring their best to Sha Tin, especially once their ratings reached 100 and options at the smaller course became limited.

Fownes fears the same will happen to Marvel Hero – winner of three at the track – especially after the handicapper assesses his win on Thursday.

“It looks like we have another Rainbow Chic or Noble Conqueror on our hands, they were both outstanding horses there. But it’s a bit of a curse,” Fownes said.

“They can win by big margins like that at the Valley, but he is five or six pounds worse off at the other track and they just aren’t competitive there. It can make life difficult trying to find races for them and they just have to take their chances there.”

Moreira had to make a risky mid-race move on Marvel Hero in a messy contest where a stop-start tempo forced the rider’s hand.

“They went very fast through the first bit, then they slowed, and the horse naturally got himself there closer, in fourth or fifth,” Moreira said. “But then he would have been stuck wide so I had to quicken. I’m glad it worked out because I think Caspar would have been a bit upset if it didn’t.”

Provided Marvel Hero’s rating doesn’t go up more than 12 points for the win, Fownes can send the gelding around again over 1,650m in three weeks.

“He is a handy little horse and he should win here again as it will just be against the same horses,” Moreira said.

Earlier in the night Moreira had helped Chris So Wai-yin to a double when “Derby reject” Lotus Breeze was able to win again at 1,200m. The sprinting success of Lotus Breeze wasn’t the only triumph on the night that would have confounded pedigree experts as Circuit King (Moreira), by High Chaparral, and See Me Now (Vincent Ho Chak-yiu), by Galileo out of a middle distance Grade One-winning mare, scored in sprints as well.

For So’s other winner King Winsa, jockey Brett Prebble said owners would be repaid for their patience in not retiring the five-year-old – even if the gelding just bounces around in the lower grades.

“I’m glad they stuck with him,” Prebble said. “They didn’t want to keep him, he was just weak, but now they have stuck with him he will hang around until he is eight and win over some different distances. I don’t want them to step him up yet in distance, he isn’t quite ready but will be eventually. He just sweats bucket loads before a race.”

That propensity to melt down pre-race meant King Winsa’s weight would fluctuate wildly between races – something So hopes can change more with maturity.

“He would lose 20 pounds after a race and it made it hard to keep him racing consistently,” he said.

Zac Purton denied Moreira a four-timer with a beautifully judged ride on Mr Genuine, who cut down Powermax right on the line, before bringing up a double in the last with Little Dragon.

Meanwhile, jockeys Matthew Chadwick and Ho both copped two-meeting suspensions for their rides on Kwaichung Brothers and Istanbul Bey respectively. They will be out of action from April 5.