Hong Kong raider Western Express couldn’t match the might of the Japanese in Sunday’s Yasuda Kinen (1,600m) in Tokyo but connections were content with the honest effort.

The five-year-old, who collected Group One seconds this season in the Hong Kong Mile and Champions Mile, finished 10th, almost seven lengths behind the winner Mozu Ascot.

Western Express settled just forward of midfield, but when jockey Sam Clipperton asked for an effort at the top of the straight, he couldn’t go with the locals when it mattered.

“To be honest, I’m over the moon with the horse,” Clipperton said.

“He gave us a sight, he gave people back in Hong Kong something to cheer as we turned for home but it’s a tough mile here at Tokyo. He got to the top of the rise and he’d come to the end of it.

“In saying that, he didn’t drop out, he stuck on well and at the 200m he was still just three lengths off them. It wasn’t a weak Group One, he was in against strong, genuine Japanese milers and I thought he acquitted himself really well.”

Trainer John Size wasn’t disappointed with the effort, admitting he was simply outclassed.

“He ran as well as he could. The horses in the race are just too strong for him,” Size said.

“He stood in the gate quietly and jumped well on terms with the other horses. He got a nice run through the first section of the race – he was fifth, one off the fence, so we couldn’t ask better than that. He went to make a run and he just wasn’t strong enough to get up the hill to the line.”

The Yoshito Yahagi-trained Mozu Ascot beat Aerolithe by an neck with Suave Richard a further three-quarters of a length back in third.

Yahagi said the four-year-old will now go for a break with the Hong Kong Mile one of the options for him later in the year. 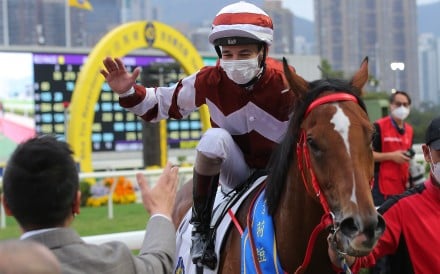