Shining On, Super Giant show they are better than 100-1 no-hopers

Shining On and Super Giant both started in excess of 100-1 at Sha Tin on Sunday, but neither will be that price again in the short-term after very similar eye-catching performances in different races.

The Francis Lui Kin-wai-trained Shining On finished sixth in the Class Four Serving the Community Handicap (1,200m) – the best finish of his five starts.

The son of O’Reilly hadn’t done much in his first four hit-outs, but it looks like he has turned the corner.

From a wide barrier, jockey Vincent Ho Chak-yiu restrained Shining On from the start to obtain cover, settling at the tail of the field.

As they straightened, Ho worked his way to the middle of the track and unleashing a withering finishing burst, ending up just a length-and-a-quarter behind the winner Victory Machine.

Victory Machine shows plenty of tenacity for apprentice Matthew Poon and holds on in a desperate scramble at the end of race four. #HKracing pic.twitter.com/FutPrF3ym8

The leaders went along at an even tempo, but nothing outrageous – the first four across the line settled in the first six in running – making it even more impressive.

Shining On’s final 400m sectional of 22.39 seconds was 0.31 faster than anything else in the race and he looks a horse to follow.

It appears as though he has found his footing in Hong Kong and it won’t be too long before he breaks through.

Dennis Yip Chor-hong’s Super Giant is in a similar boat, but he shocked everyone with a striking Hong Kong debut in the Class Three Sporting Exchange Handicap (1,400m).

After winning over 1,515m by 15 lengths at Chester in September last year, the horse formerly known as Spud found his way to Hong Kong, but he hadn’t shown much in three pretty ordinary barrier trials.

Given that, he was sent out a 194-1 chance on Sunday, but someone forgot to tell the three-year-old.

A "California" double for Tony Cruz as California Joy takes the last at Sha Tin; that brings up a brace for Joao Moreira as he closes the gap in the title race to 3. #HKracing pic.twitter.com/tsPCv3WoRi

Jockey Douglas Whyte opted to go back from gate 12, settling second last, and he had plenty to do as they turned for home.

Super Giant responded to the challenge, picking up the bit and rattling home down the outside to snatch third, just a length behind California Joy.

Super Giant might just be a horse who produces his best on race day, but with that performance under his belt, he will probably start a 20th of that price next time around. 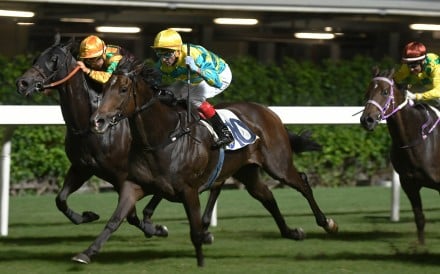