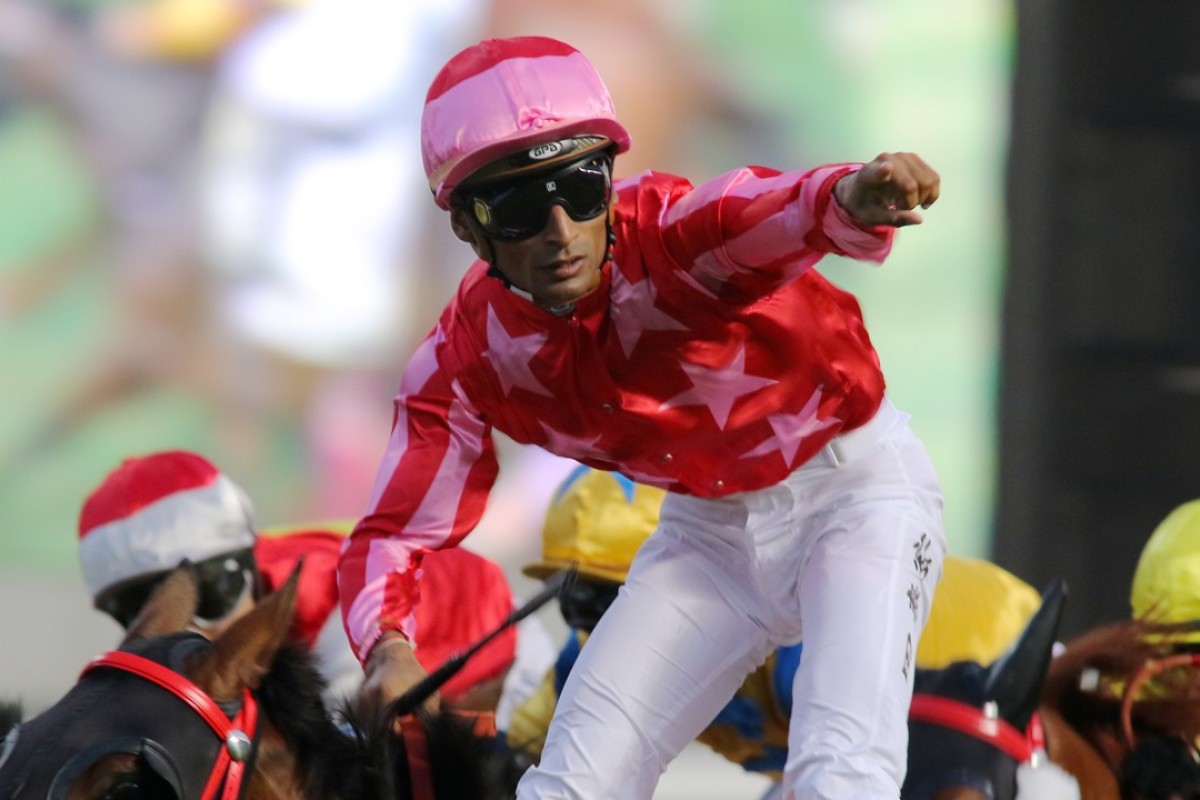 Karis Teetan celebrates riding his fifth winner on Morethanlucky in the last race of the day. Photos: Kenneth Chan

Karis Teetan sealed his best day in Hong Kong with a cry of “yeah baby” as he crossed the line in the last race to cap a dominant five-win performance.

Teetan topped his previous best of four winners in 2016 with Sunday’s quintet at Sha Tin, including a rare victory in the stewards room, having a second place overturned for a win after stewards found the winning horse obstructed his run.

The haul takes the Mauritian Magician to 11 winners for the season, placing him three behind Zac Purton and creating a clear gap between the duo and the rest of the field, who look set to be the dominant jockeys of the season with the departure of Joao Moreira.

“One is difficult to ride here, imagine five,” Keetan joked after the last race. “I had a very good book of rides today, I am just glad it all came together.”

He might not be Pakistan Star, but Tony Cruz’s Pakistan Friend has plenty of upside

Many had written off the four-year-old, but Teetan said he had the ability to move through the grades with time. “To be honest, I really like this horse,” he said. “When I rode him the first time some people questioned that he’s not that good … he’s not as good as Pakistan Star but he’s got a bright future, he’s just not ready still, he’s very immature, mentally he’s going to get better and in a few months time I think this horse can keep taking steps.”

When pressed on his chances of potentially challenging Purton for the jockeys’ title this season, an upbeat Teetan said he had adopted the mantra of “why not?”.

It takes much more than just luck to ride a five timer at Sha Tin. The Mauritian Magician shows his skills yet again as Frankie Lor's Morethanlucky seals a sparkling five timer for @KarisTeetan in the finale #HKRacing pic.twitter.com/qugNytrmFi

“It’s still very early in the season, it’s something I think all the Hong Kong jockeys look at one day, it’s difficult to ride winners here but to compete and have it good like this, I really appreciate it,” he said.

“Zac is good and to get close to him like that, I don’t want to get a big-head, but why not? It’s out there, Joao is not here now so there is a few opportunities but I am not going to think that big at this stage.”

Teetan was able to ride his second winner for South African trainer Tony Millard via a protest after it was found Derek Leung Ka-chun had shifted out into Teetan, costing him a winning chance in the race after missing out by a head.

Despite successful protests coming few and far between in Hong Kong, Teetan said he was confident the decision would be overturned. “To be honest I think if that inside horse did not roll in on me I would have won the race because once he rolled onto me he stayed there,” he said.

“If Derek [Leung] did not lean out then I think I would have still gone past him, so I think from my horse, it is a big, big credit from him because he really dug deep when it happened.”

Teetan also rode Super Star for Millard, who enjoyed a day out at Sha Tin, collecting a trio of winners.

The handful of wins puts Millard atop of the trainers premiership table on nine wins, ahead of first year sensation Jimmy Ting Koon-ho.