On a day that saw two Group One races run and won, it was perhaps the Class Three Po Hing Handicap (1,600m) that produced the happiest trainer, with Paul O’Sullivan beaming after Scared Ibis’ win.

“Hello, my name’s Paul O’Sullivan,” the New Zealander said cheekily as he emerged from the weigh-in room, referencing the lack of times he’s had to front the press this season.

“What can I say, it’s been a little while between drinks,” he added after landing his first winner in a month and only his fifth for the term.

Sacred Ibis bounces back in R6: Paul O'Sullivan's gelding can produce a storming finish when on song and @DJWhyteJockey unleashes it to perfection to subdue Famous Warrior and Super Giant #HKracing pic.twitter.com/yqurRZcjDh

“We’re at that halfway stage where the old horses are going out and the new ones are coming in. Hopefully a few of the new ones can pick up where the rest left off last year.”

Scared Ibis impressed last season with three wins and three placings from eight starts but had been a little off so far this term, with O’Sullivan under no illusion that the horse needs a race run to suit to produce his best. 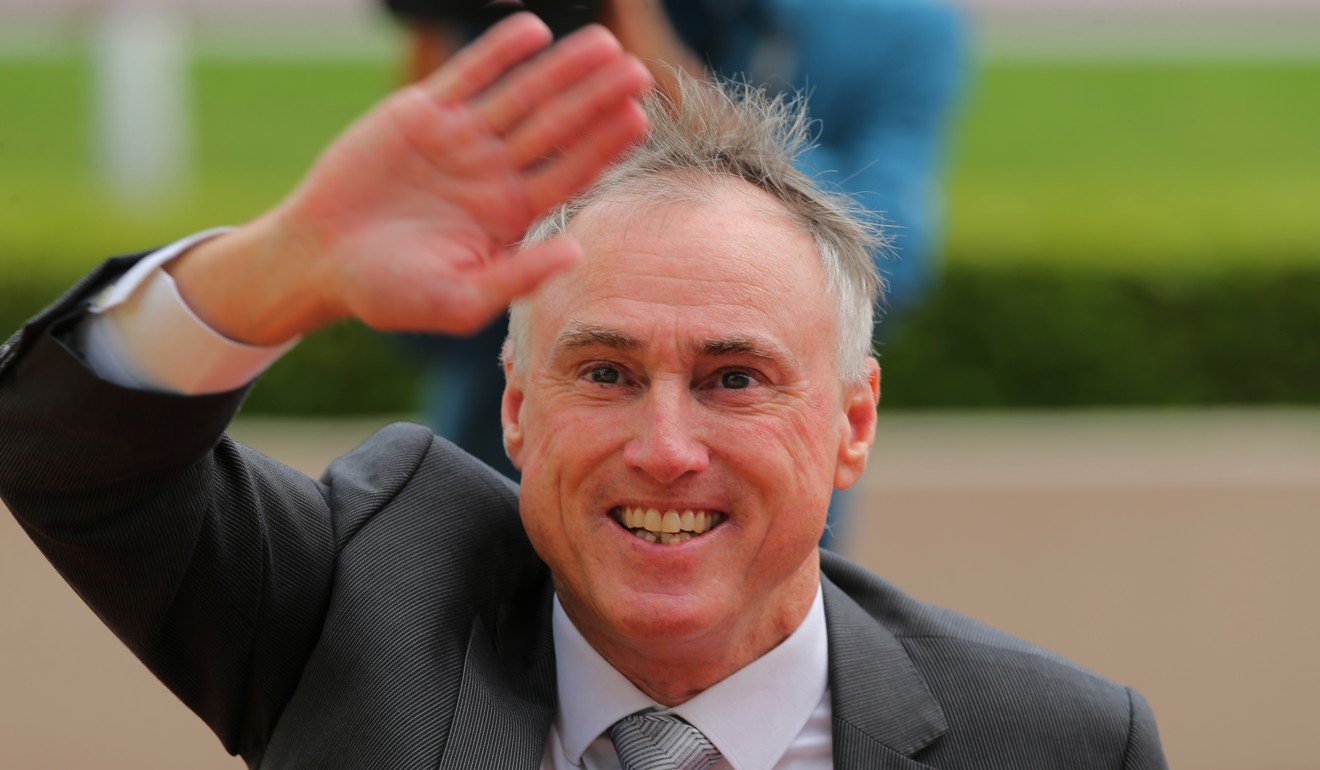 “He’s a horse that I think would be well-suited to racing left-handed, but he’s not going to get that chance here. He finds it very difficult to get around the corners.”

Douglas Whyte jumped back aboard Sacred Ibis for the first time since early November after Derek Leung Ka-chun rode the horse at his last two starts – both eighths – and O’Sullivan was not surprised to see him give the horse a boost.

“Douglas has been with him for a little while and he knows the horse very well. He’s a 13-time champion jockey, he knows what he’s doing,” he said.

Size working Waikuku out on the go

He’s had three of the last seven Hong Kong Derby winners and punters at Sha Tin may well have witnessed another top contender for this year’s edition from the John Size yard.

Irish import Waikuku blitzed a strong Class Two field in the last race of the day over 1,400m, throwing his hat into the ring of top four-year-old series contenders.

The champion trainer admits he’s yet to map out a plan for his promising type, but wants to get to the Derby in March.

“I haven’t got a plan. If we turn up at the races on Derby day, I don’t really care how we get there, I’ll work that out as we go,” he said.

With no entry for next week’s Classic Mile, Waikuku is going to have to take a different path to most, but the impressive win will almost certainly give him the ratings boost needed to make the final field.

“He’s nice isn’t he? He’s gone well today,” Size said in a frank assessment of his horse. “He’s had three quick runs and he’s done each well each time so he’s well on the way.” 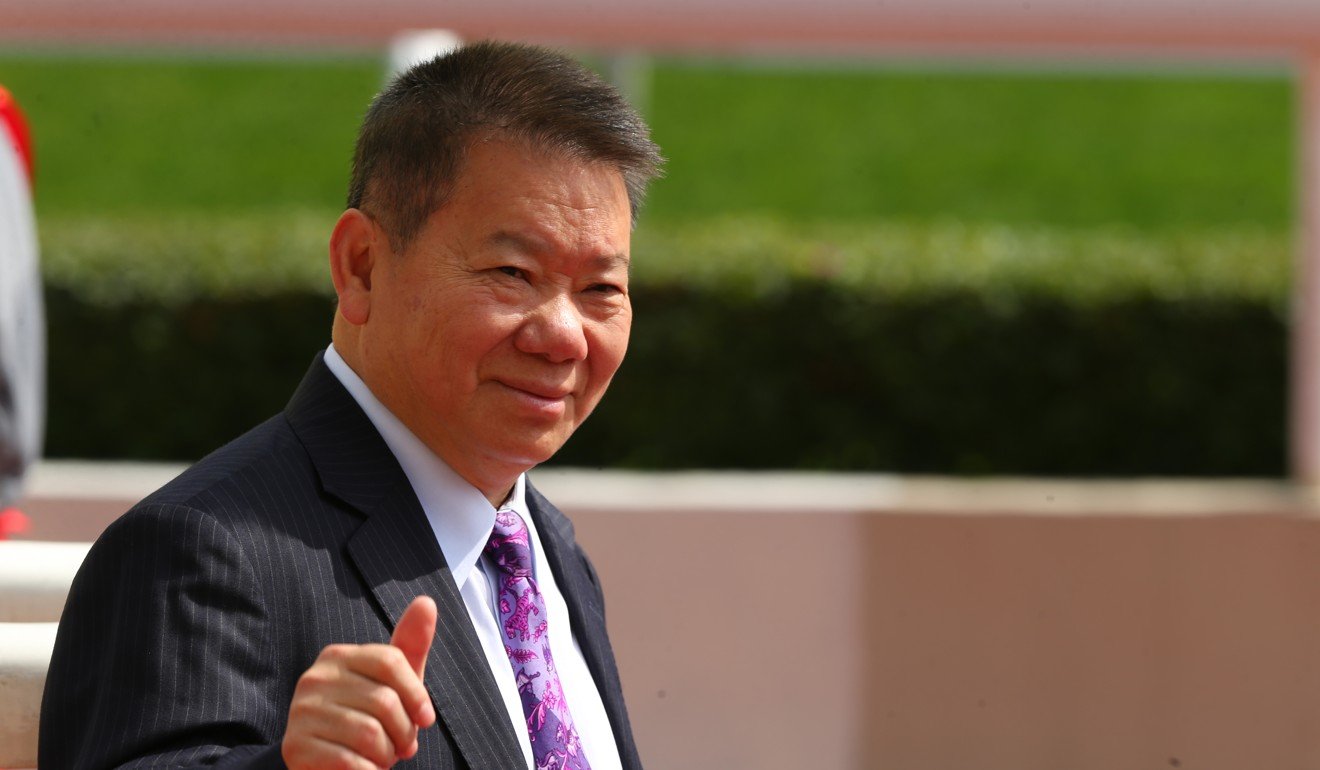 Manfred Man on the double

It was a case of quality over quantity for Manfred Man Ka-leung at Sha Tin on Sunday, with the veteran trainer landing a double despite having runners in only three races.

Care Free Prince springs a 16-1 surprise in the opener at Sha Tin on Stewards' Cup day, notching his first win since May 2017 by rallying gamely under Victor Wong to foil hot favourite Picken in a desperately close finish #HKracing pic.twitter.com/llOLifUP2s

Victor Wong Chun edged Care Free Prince home by the narrowest of margins from the Size-trained Picken, so close that Man admitted he thought it was a dead-heat.

“Everybody knows John Size’s horse is very strong but the big difference was the 20 pounds between the pair,” Man said.

Ever Laugh made it two wins on the bounce after also saluting in mid-December, with Leung sitting handy in the run before peeling the horse out at the turn and hitting the front 200m from home.

Ever Laugh completes a quickfire double for trainer Manfred Man in R2: Derek Leung is the man aboard and breaks a losing run of 53 rides stretching back to the same gelding's course and distance success on16 December. #HKracing pic.twitter.com/H4l2ZdCyxj

“He’s in good form and it was a good distance for him,” Man said of Ever Laugh, who is rated 54 and will be treading close to Class Three territory once the handicappers decide on their penalty.

“The step-up might be a little bit difficult because now so many new PPs [private purchases] come to Hong Kong in Class Three, so it’s another challenge.”

I will now be managing my own rides for my final three months in SA. For any enquires please contact - 0434 316 787 Thanks

Monday’s all-important Jockey Club licensing committee meeting will determine the future of plenty of riders, but one name just about guaranteed to be on the list is Alfred Chan Ka-hei.

He is set to be the next apprentice to join the Hong Kong ranks after spending the early part of his riding career in New Zealand before moving to Australia at the end of 2017.

Chan has collected 100 winners so far – 49 in New Zealand and 51 in Australia – and follows in the footsteps of Matthew Poon Ming-fai and Wong as having spent time in the South Australian Apprentice Academy.

The 24-year-old’s 10-pound claim is sure to be in hot demand when he starts in a couple of months.