The champion Australian boots home Caspar Fownes’ debutant Winning Delight, much to the surprise of the trainer 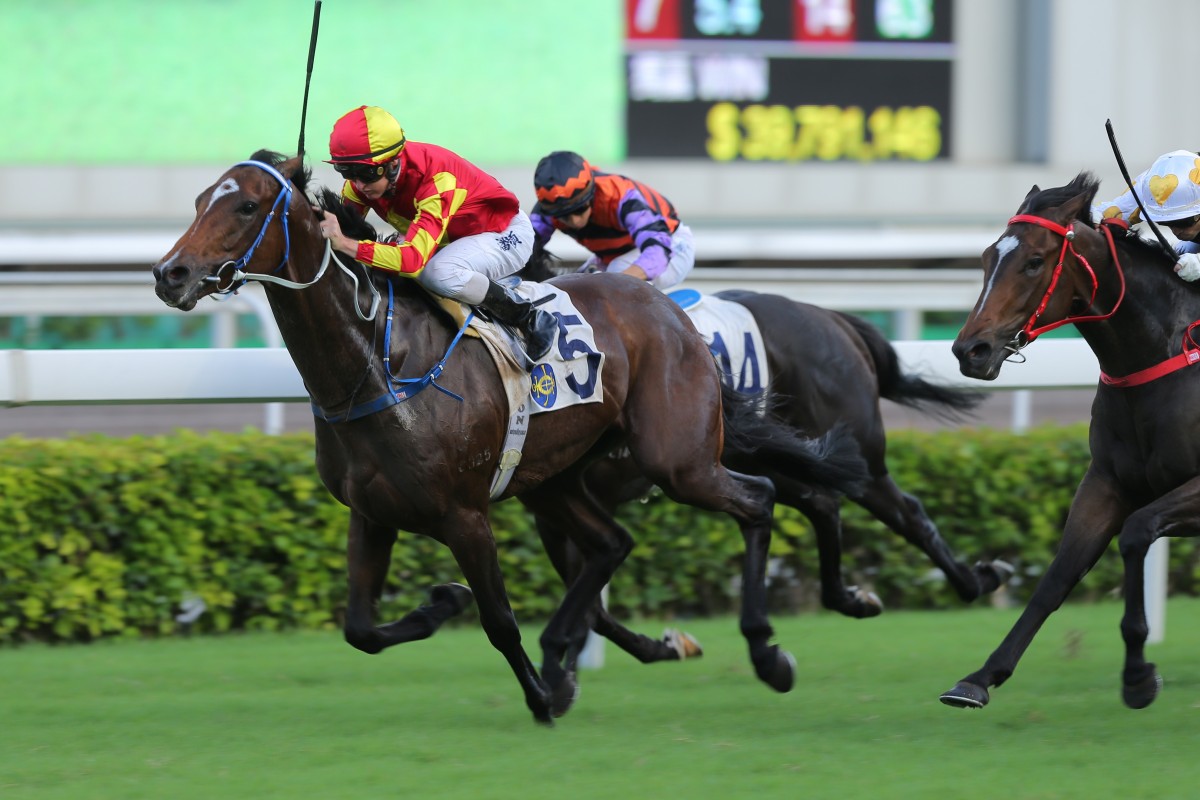 It was way back in May of 2012 that Purton last had a winner over $50, saluting then with Samadhi for Manfred Man Ka-leung at $55.

He’s had only five winners for the season over $11 and his second-roughest result this term also came for Fownes, with Green Luck saluting at $29 back in November.

But while most of the Australian’s 156 winners this season have been popular with punters, he showed he can still spring an upset.

After winning once from five starts in Australia, Winning Delight had three quiet trials before surprising even Fownes at his first run in Hong Kong.

“It’s a nice surprise, I didn’t really expect him to be winning and to do that, you’re always happy because it’s something to work with for the future,” Fownes said.

“Of course it’s a surprise when you win first-up in Hong Kong but the horse hasn’t done too much wrong. He’s trialled all right and Zac Purton at 50-1 is a little bit ridiculous. I tipped the quinella in my numbers for the owners, so they should all be happy.” 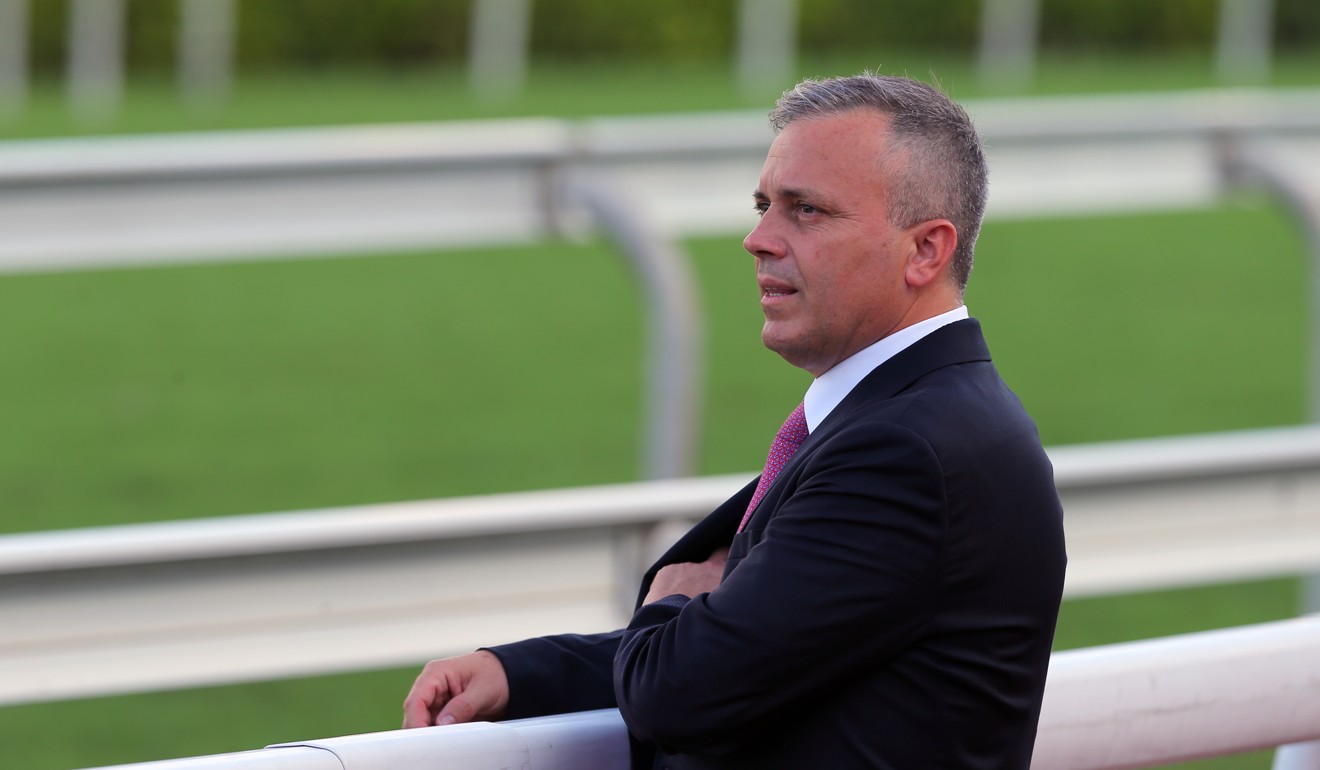 Booking Purton this season has been no mean feat but Fownes managed to catch him at the right time.

“I texted him late [last] Sunday and he said he was free for two races, so I used him. One was Shamport and one was this horse, both for the same owners. One ran like crap and one won, so it was good,” Fownes said.

Fownes is confident Winning Delight, who was rated 72 before his win, will get another crack at Class Three and is hopeful he can carry on his form next season.

“He’s not going to get much for the win, probably five points, so it’ll be all right,” he said. “If they can get to 90 points you’d be very happy, but it’s a long way ahead.”

Aldo Domeyer continues the exceptional start to his Hong Kong career, securing another double at Sha Tin on Monday.

The South African guided home the impressive Victoriam for Francis Lui Kin-wai in the opening event before prevailing on the Tony Cruz-trained Beauty Loyal in the fourth race.

The former had a fair bit on his rivals and Domeyer believes there is still plenty of upside.

“He’s still learning but I rated him from the time I got here,” he said. “I hope he comes on from this, I think the time off now during the off-season will do him well. He still needs a bit of time to mature but he’s doing all the right things.

It's an early double for Aldo Domeyer who guides Beauty Loyal to a comfortable win. 2⃣ #HKracing @SAJockeyAcademy pic.twitter.com/XOlEpZK03O

“I’m looking forward to what there is to come from him. The progress from his previous start to this one has been quite nice. There’s a lot of scope there.”

Beauty Loyal had only been fair since arriving from Australia and was winless in his first 16 starts, but he might have turned a corner.

“He won in comfortable fashion – he should be able to follow up again next start. I think it was a simple niggle that Mr Cruz got on top of quickly,” Domeyer said.

The 32-year-old now has 10 winners and 24 placings from 87 rides, with his last six winners all coming at Sha Tin after a hot start at Happy Valley.

“It literally is my backyard and I’m starting to enjoy it here,” he said. 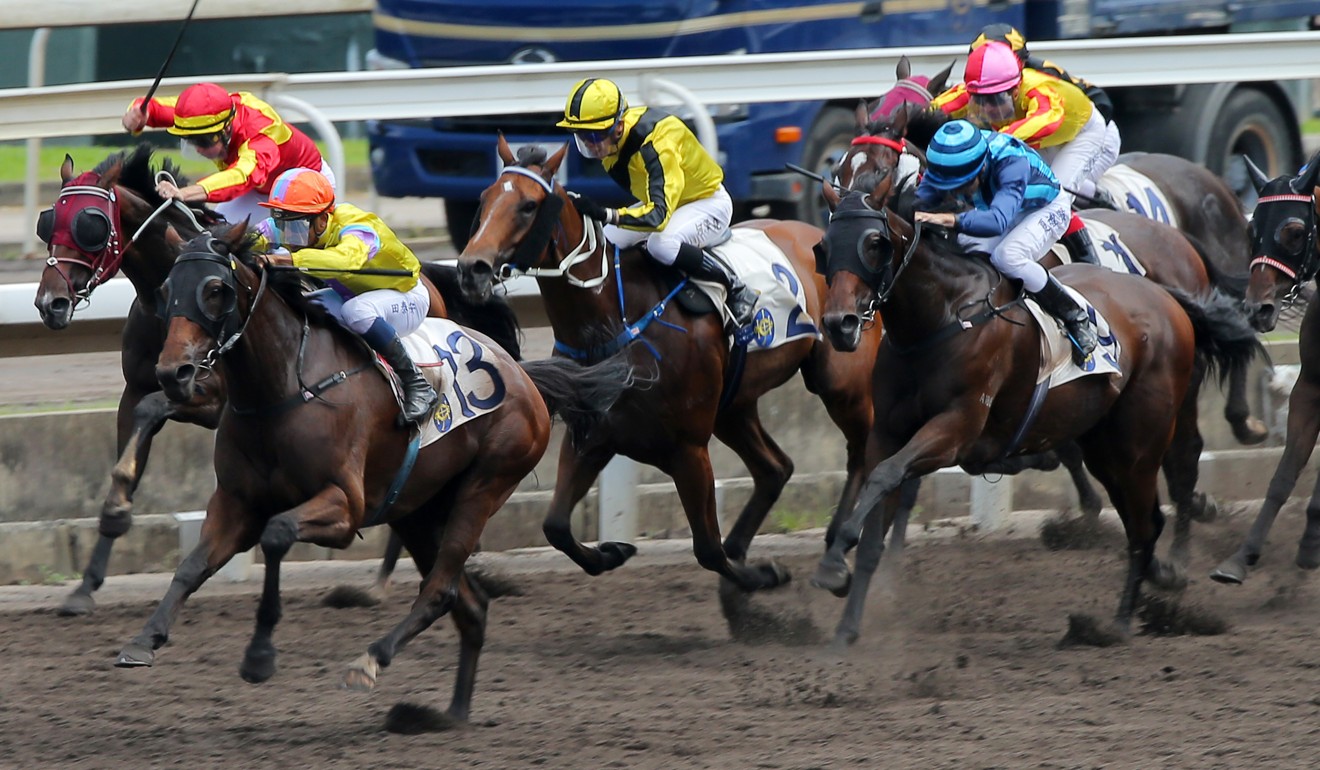 O’Sullivan marvels at his ‘exceptional feat’

Even affable trainer Paul O’Sullivan was impressed by what he described as the “exceptional feat” of landing the quinella in a Class Five race.

“It’s an exceptional feat, landing the quinella in a Class Five – you don’t often see that,” O’Sullivan said. “I can’t even remember that [happening], because you never even get two in a Class Five race.”

It's a Paul O'Sullivan quinella as Hidden Spirit breaks through for the first time! #HKracing pic.twitter.com/YgyYFwIdYA

O’Sullivan was at his happy-go-lucky best after the race, cracking jokes as he soaked up a crucial result for the four-year-old Hidden Spirit, with horses rated below 20 at season’s end forced into retirement.

“This horse was running for its life today because he was sitting on 20 points,” O’Sullivan said. “Slight misjudgment from the handicapper last time by not giving him one [rating point], but we won’t hold that against him.

“The step-up to 1,650m was very positive and he has always run his best races on the dirt. Today he looked like a pretty solid Class Five dirt horse, so all in all very good.” 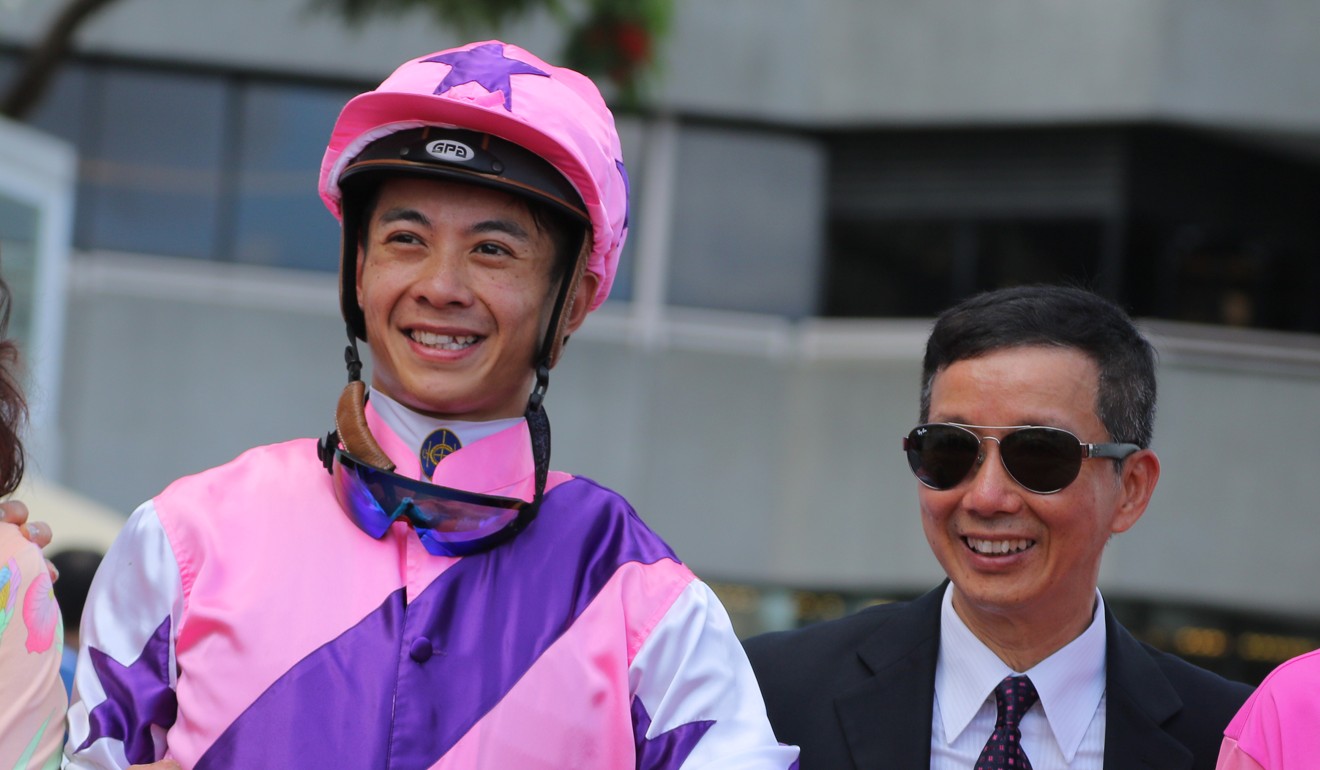 Trainer Benno Yung Tin-pang says he is happy to play the villain for as long as it keeps yielding winners.

While Kwok drew all of the attention pre-race on the owners’ balcony, Yung took the victory in his stride, marking his 27th for the season.

Derek Leung took the gap and Super Junior was up to the challenge, denying the unbeaten Dancing Fighter. #HKracing pic.twitter.com/RxuqSEfbVT

Super Junior’s victory saved the Jockey Club a tricky public relations exercise with photographers ready to flock to Kwok should his even-money favourite have won.

“I don’t mind [upstaging Kwok] whenever I get a winner,” Yung laughed. “I told Derek [Leung Ka-chun] to sit just off the speed and see what happens, that’s what he did.”

Kwok will still leave the races with his head held high, with Dancing Fighter set for bigger and better things next season. 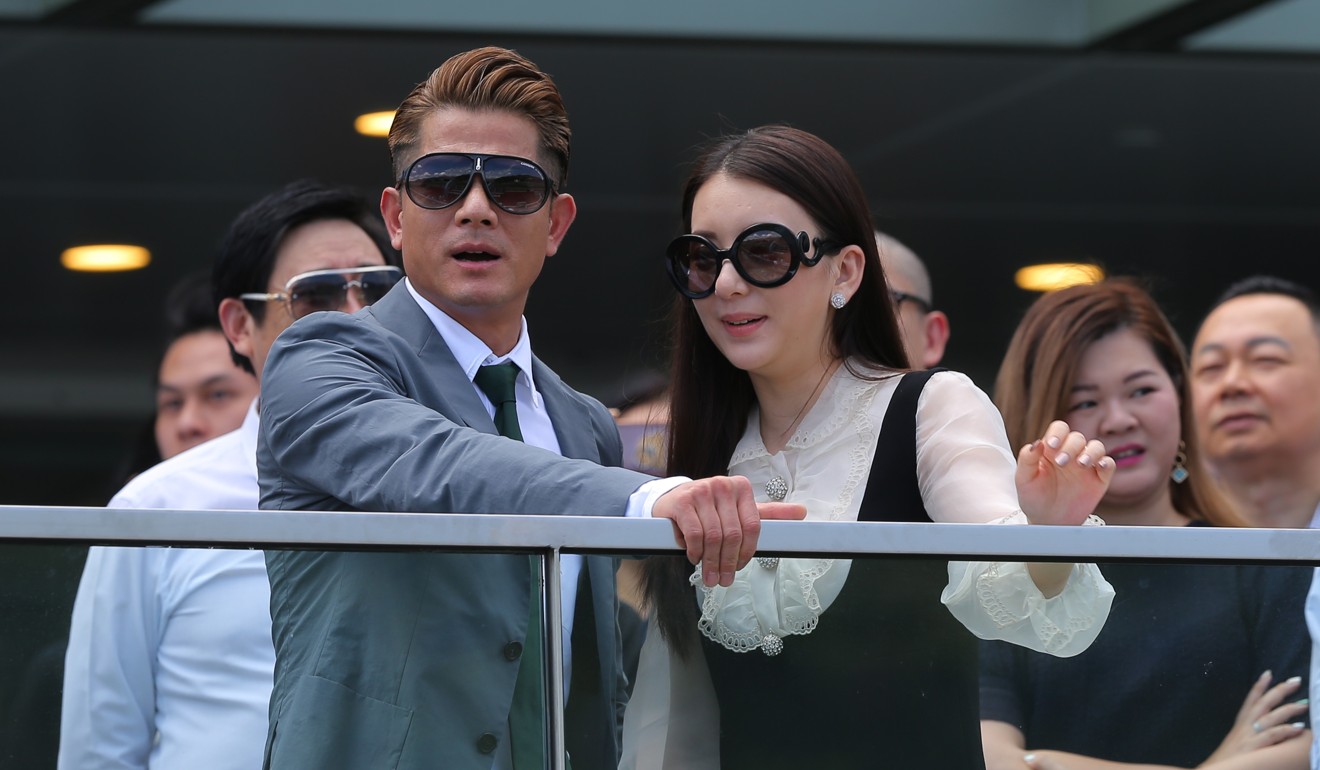 Youngsters up for auction on Friday

The July edition of the Hong Kong International Sale is being held at Sha Tin on Friday night, with 21 horses set to go under the hammer.

The youngsters have been sourced from sales in Australia, New Zealand and Europe with the most expensive being a Frankel gelding who cost €300,000 (HK$2.65 million).

In order to participate in the sale, bidders need to have either a PPG permit or be a PPG reserve holder.