With just two meetings remaining, a solitary win separates John Size and John Moore in what has become a titanic battle for the trainers’ championship.

Coming into Sunday’s Sha Tin meeting trailing by two (74 to 72), Moore halved his deficit when Magic Success took out the Class Four Beas River Country Club 1,400m Handicap – the beneficiary of a terrific Zac Purton ride and one of the jockey’s six victories for the day.

While Moore saddled up nine runners across the 11-race card, Magic Success was his stand-out chance, with six of them jumping at double-figure prices.

But it was a different story for Size, who endured a frustrating outing with three seconds (the margins were narrow in the cases of Monkey Jewellery and Red Desert) from his eight starters, meaning he has only had one winner from the past five meetings.

Make that five for @zpurton! 5⃣ Magic Success brings John Moore to within one win of John Size in the race for the trainers' premiership! #HKracing pic.twitter.com/GqftVQBYwA

The 10-time champion has had to watch his lead evaporate with his fellow Australian boasting six in the same period.

Moore is doing everything he can to snatch his eighth title and was delighted to again close the gap.

“That’s great to get within one of John,” he said. “It’s going to go down to the wire.”

Magic Success failed as an odds-on favourite three weeks ago, but the removal of blinkers and the step up to 1,400m made a difference.

As did a peach of a ride from Purton, who was midfield on the rail early, but moved out to find clear running and was ready to pounce as they entered the straight.

“That was a great ride in the sense that Zac thought [The Show] may go on and take him into the race but it was the opposite and he just went to the box seat,” Moore said.

“Zac knew it was an [outsider] so he’s come off the fence and by the time he got to the 550m he was already three-deep and travelling. That was the end of it and the horse won well. 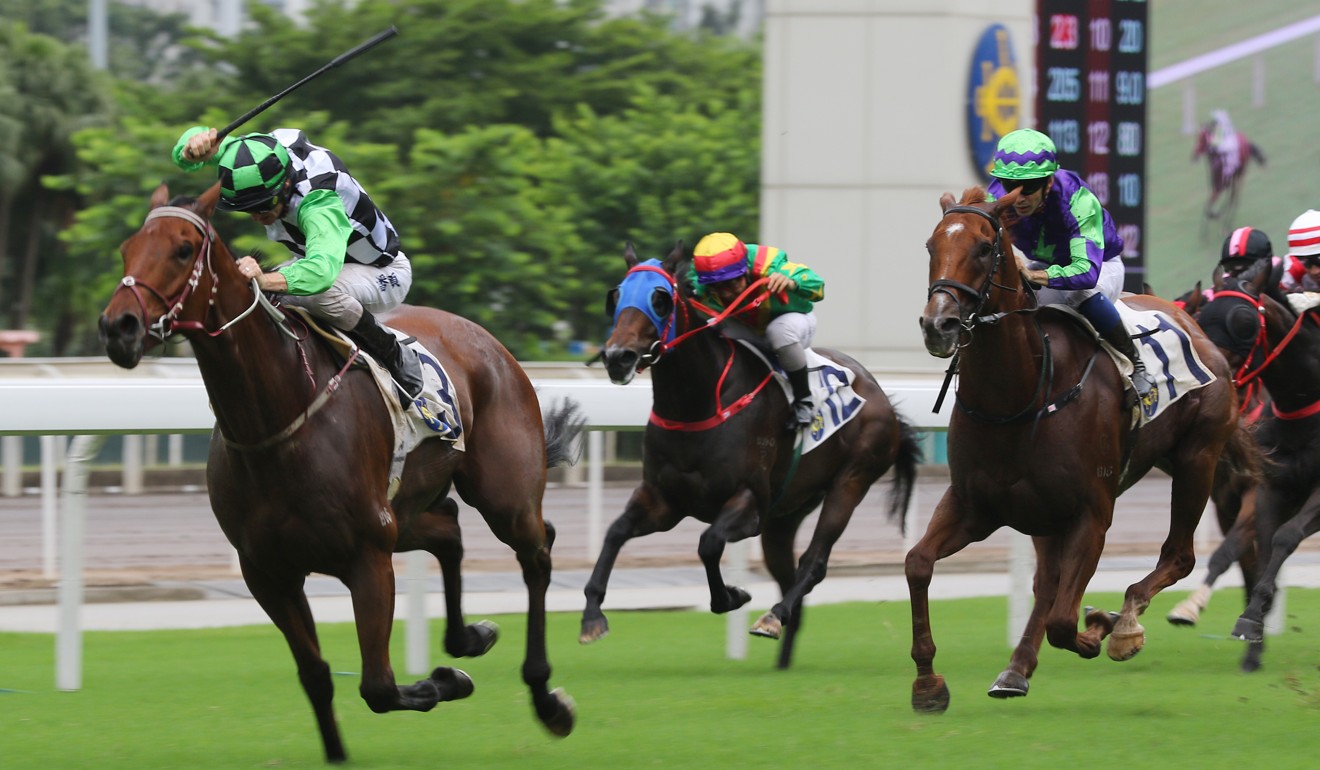 “Taking the blinkers off was the main reason for him winning. He didn’t travel firm on the bit and was able to relax. The step up to 1,400m helped as well.”

Moore is feeling good about his chances of overhauling Size, but he can’t just tie him as the man wearing the metaphorical yellow jersey has the clear edge in both seconds and prize money won if it goes to a countback.

The 69-year-old, who will be forced into compulsory retirement at the end of next season, should have five runners at Happy Valley on Wednesday night (Size looks likely to have six), while he also thinks he has some ammunition up his sleeve for the final meeting of the season.

“On Wednesday, we’re very strong, and then on the last day we have the big boys out again when Thanks Forever will be back out with Zac on board,” Moore said.