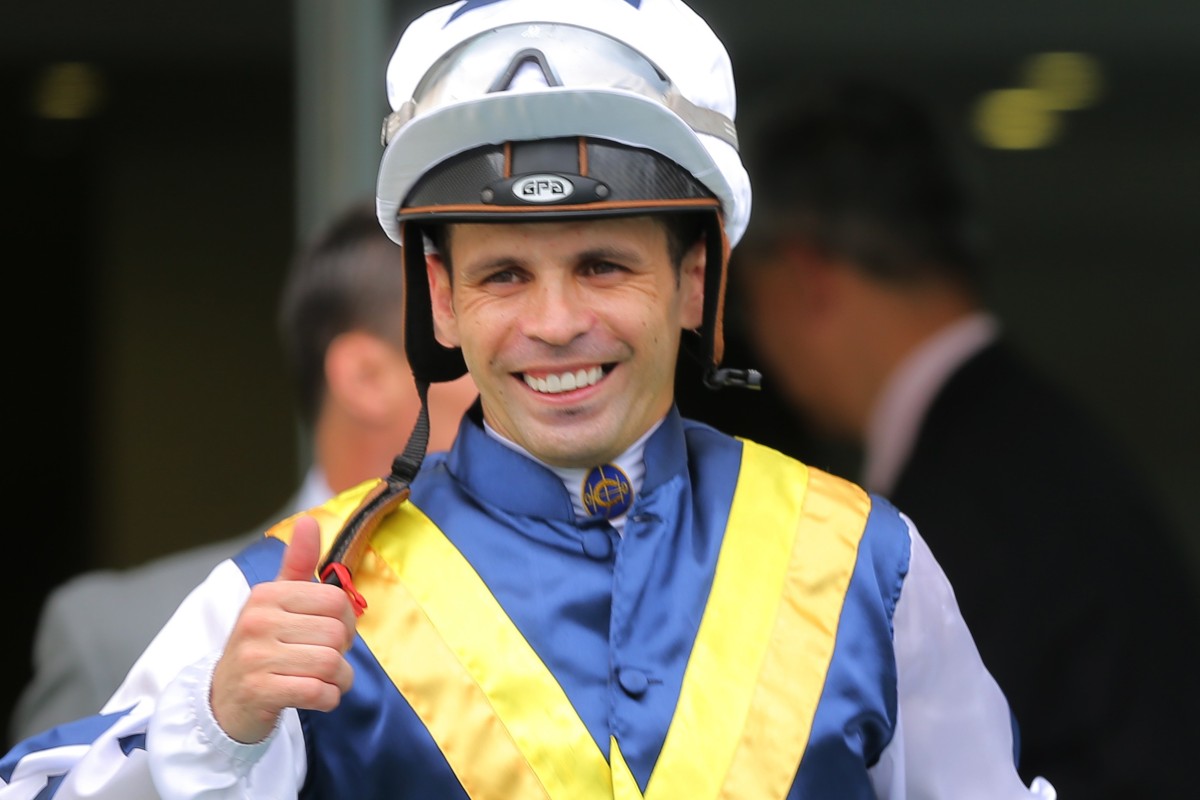 Aldo Domeyer is returning home to South Africa to be with his girlfriend. Photos: Kenneth Chan

After four placings at Sha Tin on Sunday, Aldo Domeyer is hungry for a winner at Happy Valley on Wednesday night before he jets off to South Africa on indefinite leave to join his girlfriend Sharna and meet his third child.

Sharna is due to give birth on Tuesday and Domeyer will head off to be with his family soon after.

“It will be born on Tuesday so I’m just going to miss it. I’m going to take up my engagements on Wednesday because I’ve got a fair book of rides,” Domeyer said.

“Hopefully after that I can leave on a good note and then I’ll be in touch with the Jockey Club and try and get back as soon as I can.” 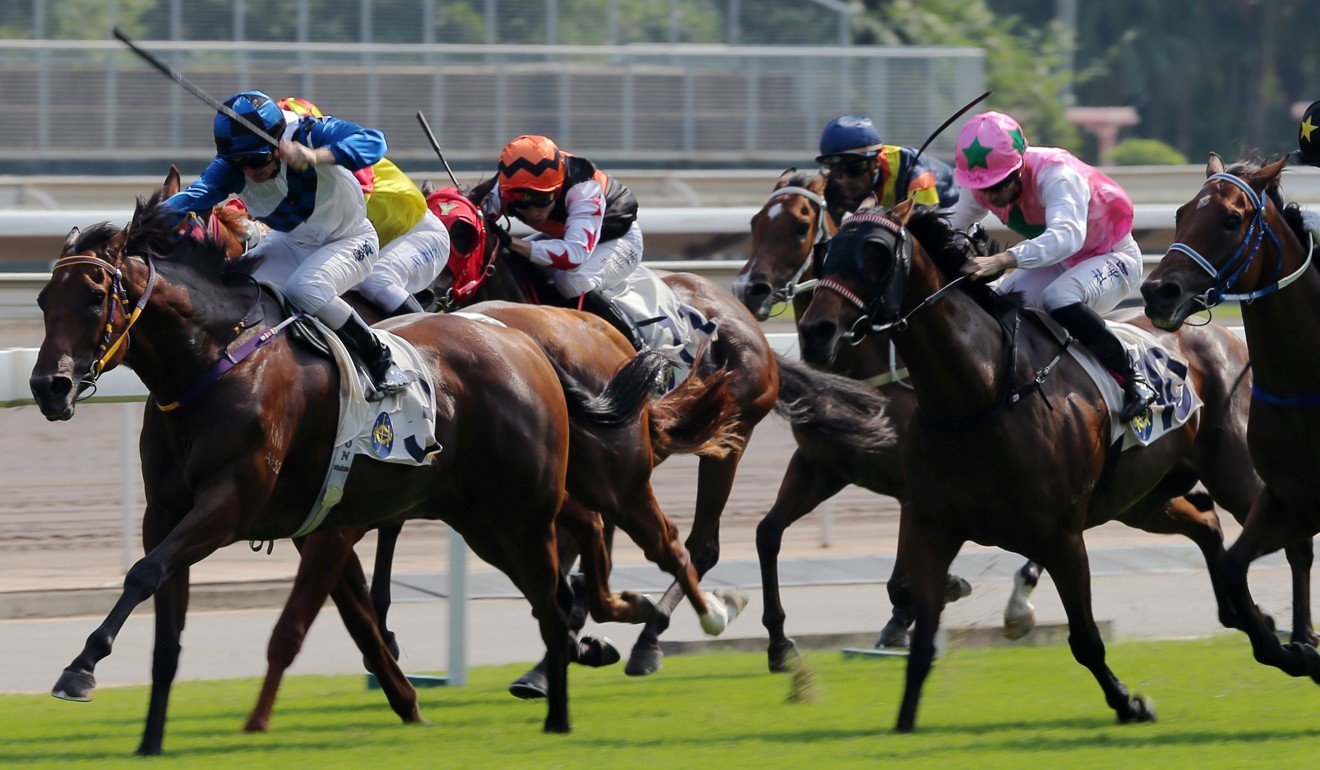 Domeyer and his girlfriend have two boys already, however the nerves are starting to kick in for the 32-year-old.

“There’s obviously butterflies. It’s a pity I’m not going to be there for the actual birth but we’ve all got to make some sacrifices. I’m really excited for what’s to come,” he said after riding Sunshine Warrior, Villa Fionn, Highly Proactive and Beauty Loyal into the placings at Sha Tin on Sunday.

Domeyer is not yet sure how long he will be away.

“I’m going to see how my girlfriend handles everything and how long she needs me. Hopefully she recovers nicely and I can get back without missing a beat,” he said.

Domeyer has four winners so far this season and he went within a neck of a fifth aboard Ricky Yiu Poon-fai’s Villa Fionn, flashing home from the back of the field but having to settle for third behind Such A Happiness and Blastoise. 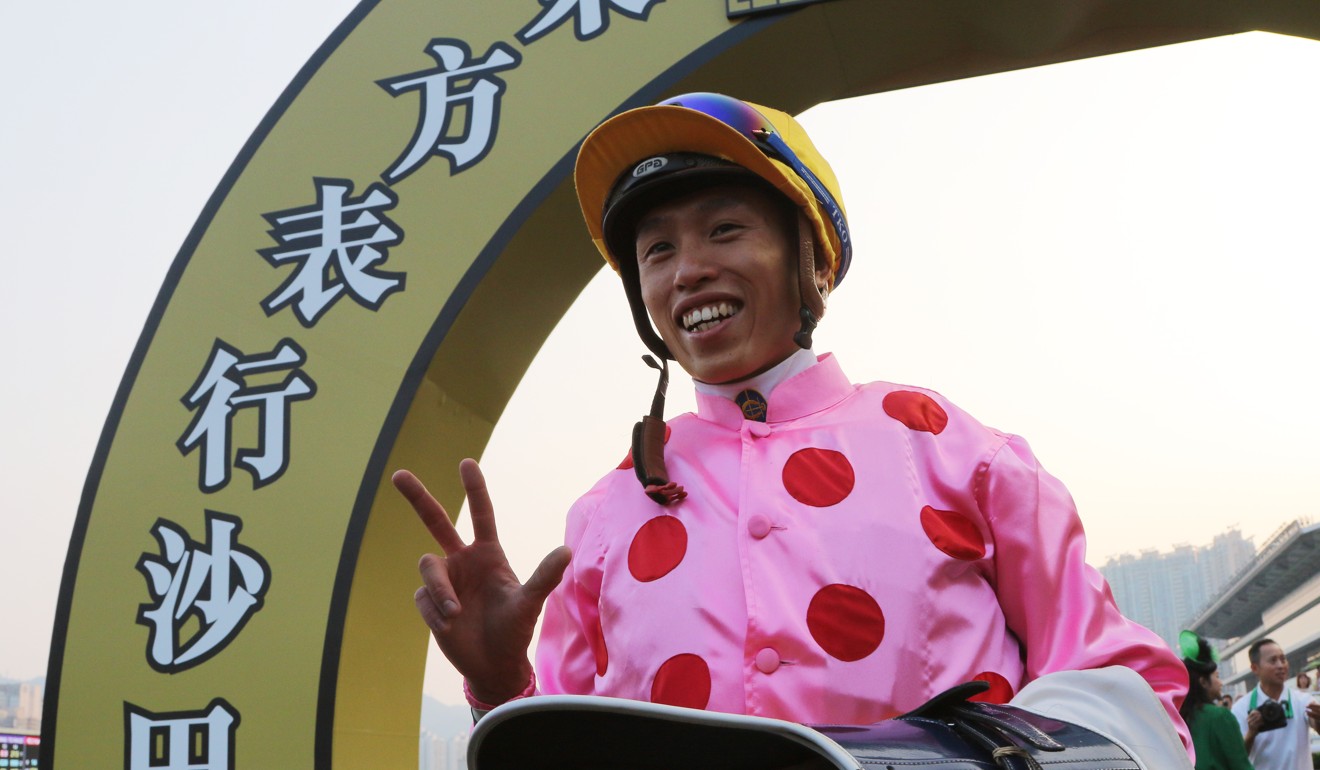 While Golden Sixty lived up to the hype as the $2.40 favourite in the Class Two IWC Excellent Handicap (1,400m), a pair of Caspar Fownes-trained gallopers also showed they could have a big say when the four-year-old series rolls around.

Golden Sixty has now won five of his six starts and performed at 1,400m for the first time as Francis Lui Kin-wai plots a course to January’s Classic Mile.

The gelding’s win came in the middle of a Vincent Ho Chak-yiu running treble that was bookended by victories aboard Rise High and Preciousship and the jockey was pleased with the performance.

“He did very well, drawn one the goal was to relax him and just try to look for a run but the run just came about and I was very lucky, once I got clear I knew he was going to win,” Ho said.

Fownes’ duo The Hulk and Columbus County both impressed in their Hong Kong debuts, with the former sticking on nicely for third and the latter rattling home from the back to finish fourth.

“They both ran well, they were bought for the four-year-old series and it was good to see,” Fownes said. 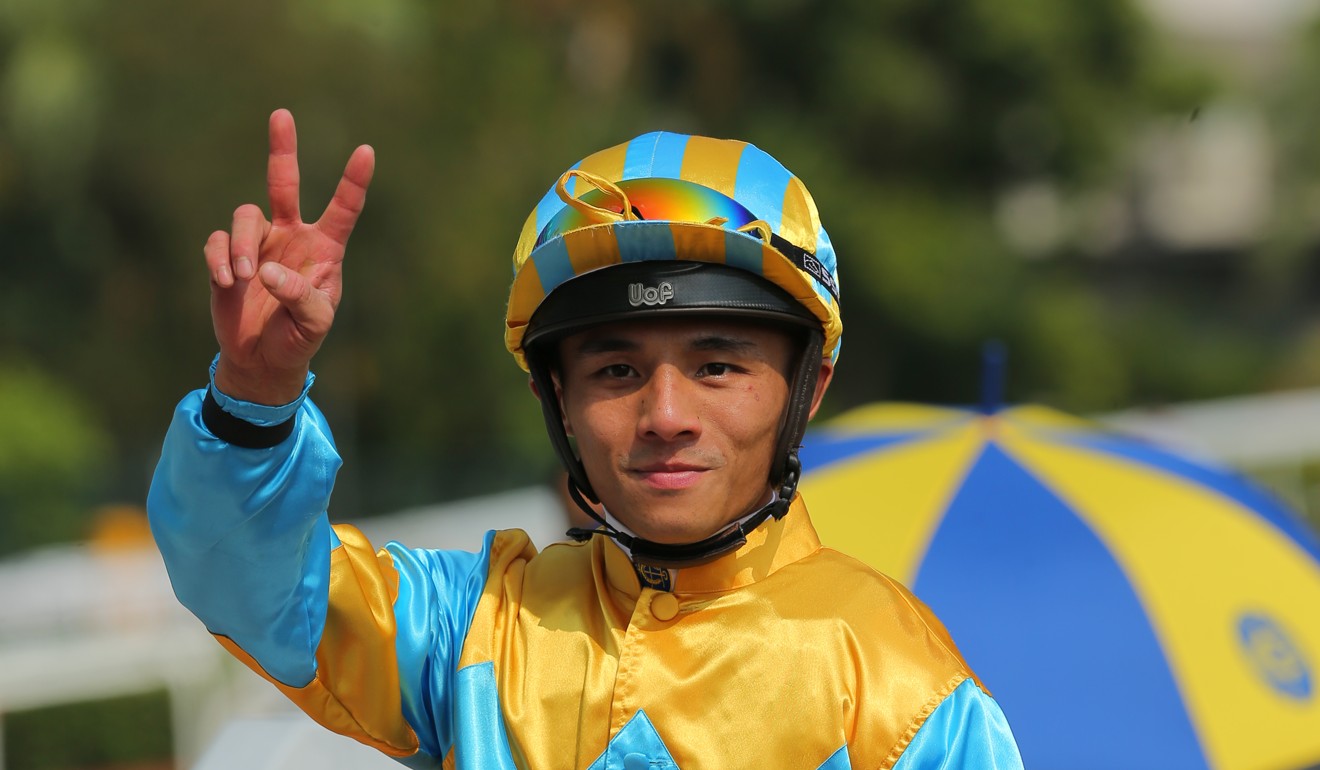 Hall and Chan friends in the end

Jockey Alfred Chan Ka-hei may have tested his friendship with trainer David Hall at Sha Tin on Sunday, but he won the Australian over in the end on his way to a double.

The apprentice’s first win aboard Big Fortune came at the expense of Hall’s Quadruple Double but the trainer was in good spirits after Chan saluted aboard Mr Lumieres for him soon after.

“Before we went out for race four, he made a joke and said ‘I’m not talking to you, you beat my horse’,” Chan said. “After I won for him with Mr Lumieres he said ‘we’re friends again now’.”

Mr Lumieres was impressive in winning at $40 to notch his third victory at start 13, with hot favourite Classic Unicorn a disappointing sixth after two consecutive wins to start his career.

“He’s always had good form down the straight. He’s probably going a little bit better this year than last year, he was having a few internal problems last season,” Hall said.

David Ferraris and Umberto Rispoli break testing droughts: ‘when you think things can’t get worse, they do’

“I saw him in the parade today and he looked as good as he’s looked in a long time so I think he was back to his best.”

Chan said he was “just feeling good” on Sunday and says he’ll take confidence from his efforts. 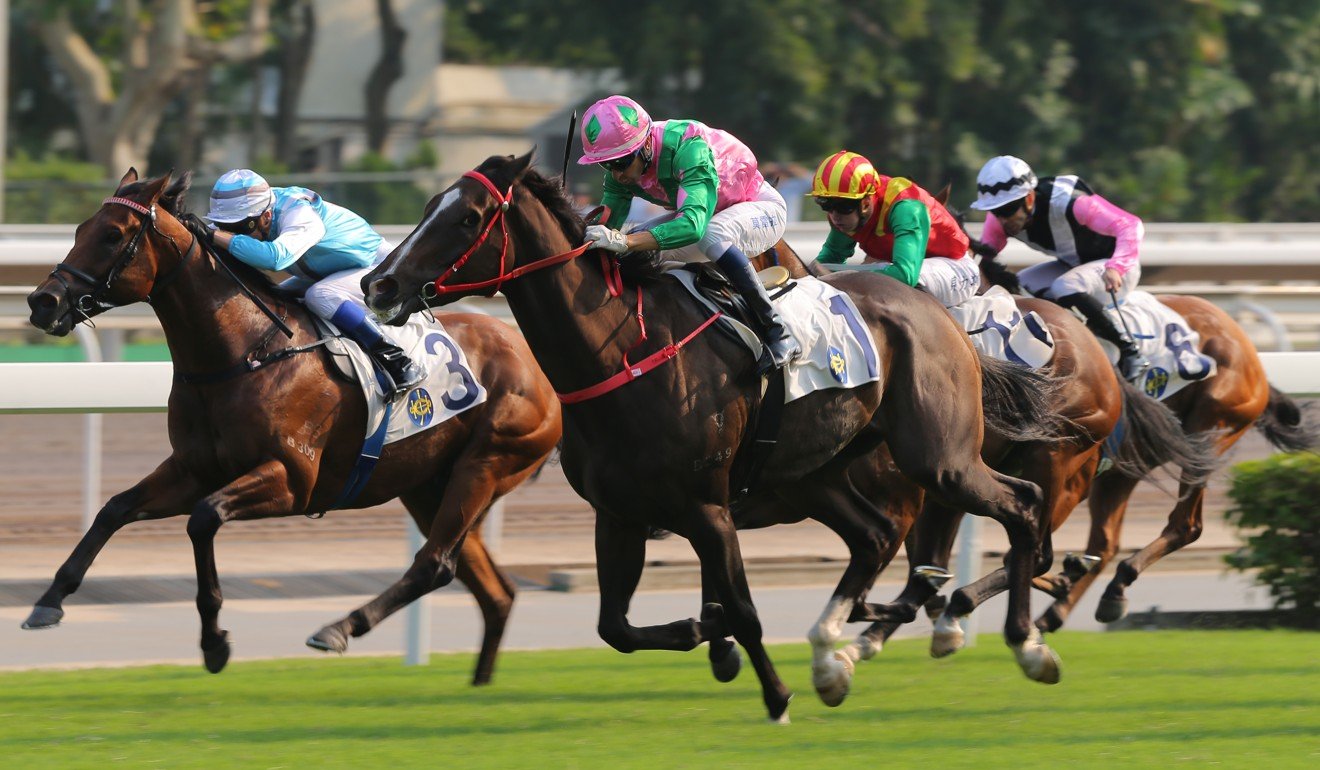 After frustrating punters no end for the majority of last season, Aerohappiness looks to have found his groove after notching his second consecutive win and third victory from his last five starts at Sha Tin yesterday.

After a win and a second in Class Four in his debut season, the five-year-old began last season in Class Three and started $3.60 or shorter six times on the bounce, letting down punters each time.

After three more fruitless runs at longer odds, Aerohappiness begun his run of form with a victory in May and has been in the top two in all but one run since.

Back-to-back wins for Aerohappiness while Joao Moreira secures his first for the afternoon! #HKracing pic.twitter.com/n4PegJjkMU

“It took him a little bit of time to hit his straps but now he has got a racing pattern that suits him and he is improved and taken very small steps in the last half-dozen starts to win a couple of races,” trainer John Size said.

“He gets a bit of blood so he gets up there and then doesn’t [win] but now he’s got some sort of rhythm that suits him, he is fine. We will go to Class Two and see what happens, see if we can get a run.” 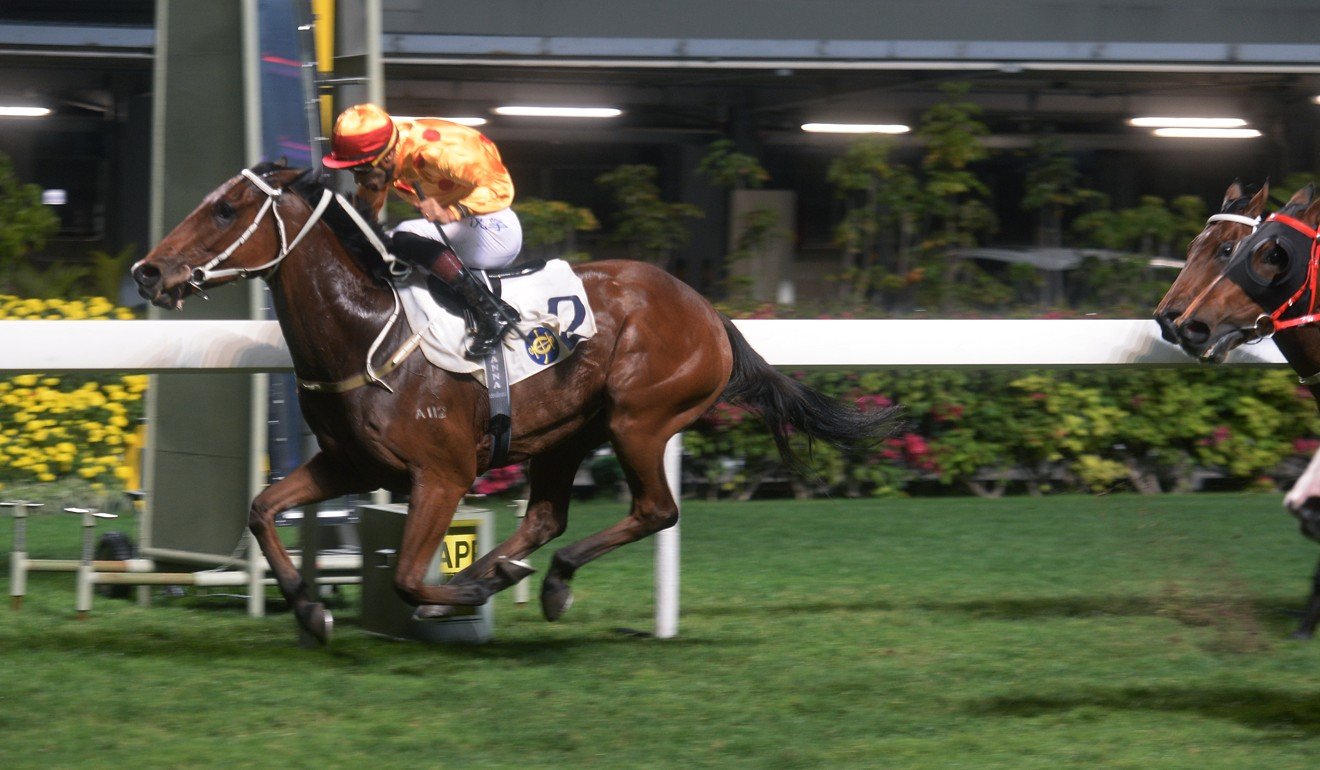 Former Hong Kong galloper Gold Mount is on track for a berth in the Melbourne Cup after running a solid 12th in the Caulfield Cup on Saturday behind Japanese invader Mer De Glace.

The seven-year-old, who was trained by Richard Gibson at Sha Tin until being sent back to England in March, finished 4.4 lengths off the winner and jockey Mark du Plessis sees it as a nice stepping stone to the first Tuesday in November.

“He went really good. He got a lovely run, settled good, finished it off good. Should be a good [Melbourne] Cup prep,” Du Plessis said.

Star French jockey Christophe Lemaire, who won the 2011 Melbourne Cup aboard Dunaden, has been booked to ride Gold Mount in the race.

Finishing half a length ahead of Gold Mount was Red Verdon, who is owned by former Hong Kong Jockey Club chairman Ronald Arculli.

Red Verdon sits 26th in the order of entry for the Melbourne Cup, two spots ahead of Gold Mount, and jockey Pat Cosgrave was happy with Saturday’s effort.

“He ran well. It got a little messy in the straight but a nice run, I thought,” Cosgrave said.