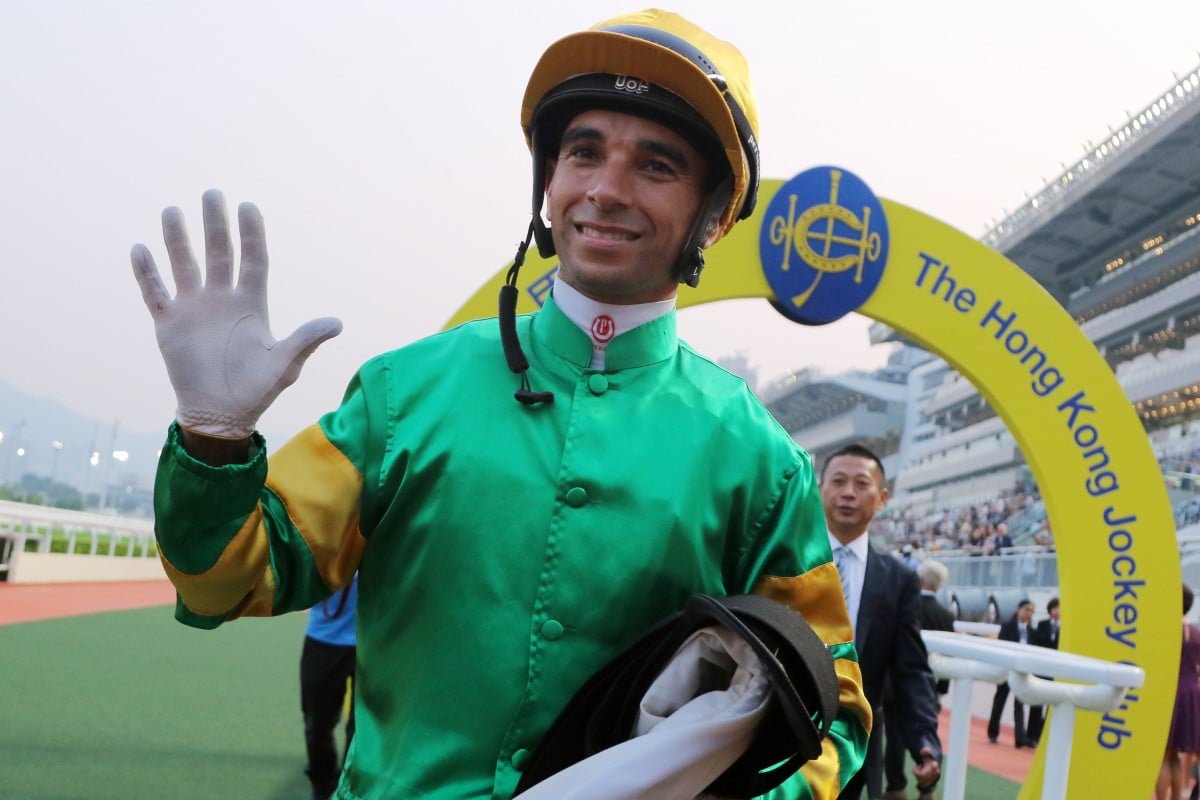 Hong Kong superstar Joao Moreira is daring to dream of Melbourne Cup glory after getting a standby call-up to ride favourite Constantinople.

Moreira was approached by the Lindsay Park team consisting of trainers David and Ben Hayes and Tom Dabernig to ride their European import after jockey Glen Boss was suspended for a ride at Randwick on Saturday, ruling him out of contention for the A$7.75m (HK$41m) feature race on the first Tuesday in November.

Boss is expected to lodge an appeal against the decision on Monday. Constantinople will carry 52.5kg (116 pounds) in “the race that stops a nation”.

Speaking to the Post, Moreira said the Melbourne Cup was the race he wanted “to win the most” after falling agonisingly short in 2016 on Heartbreak City.

“I have done one of my best rides ever in this race and it is the race I want to win the most. It is a race that I have been going there for a while now so hopefully it might be the time,” Moreira said.

“At the same time, I have my feet firmly on the ground and understand that Glen could well appeal and his appeal could have him stay on the horse.

“Glen is a good friend of mine, I wish him nothing but the best, I hope he can find a way to get around all of this so I wish him well.”

After being “heartbroken” by Heartbreak City’s second placing in 2016, Moreira suffered a fall in a race just before the Cup in 2017, ruling him out of the Group One.

“I was very unlucky, a few races before the Cup I was involved in an accident which traumatised me a little bit to be honest,” he said.

“You go all the way over there to have your chance in the Melbourne Cup and then you end up not being able to make it because of the accident, I was so disappointed for the connections who went to so much effort to get me over there, I let them down. 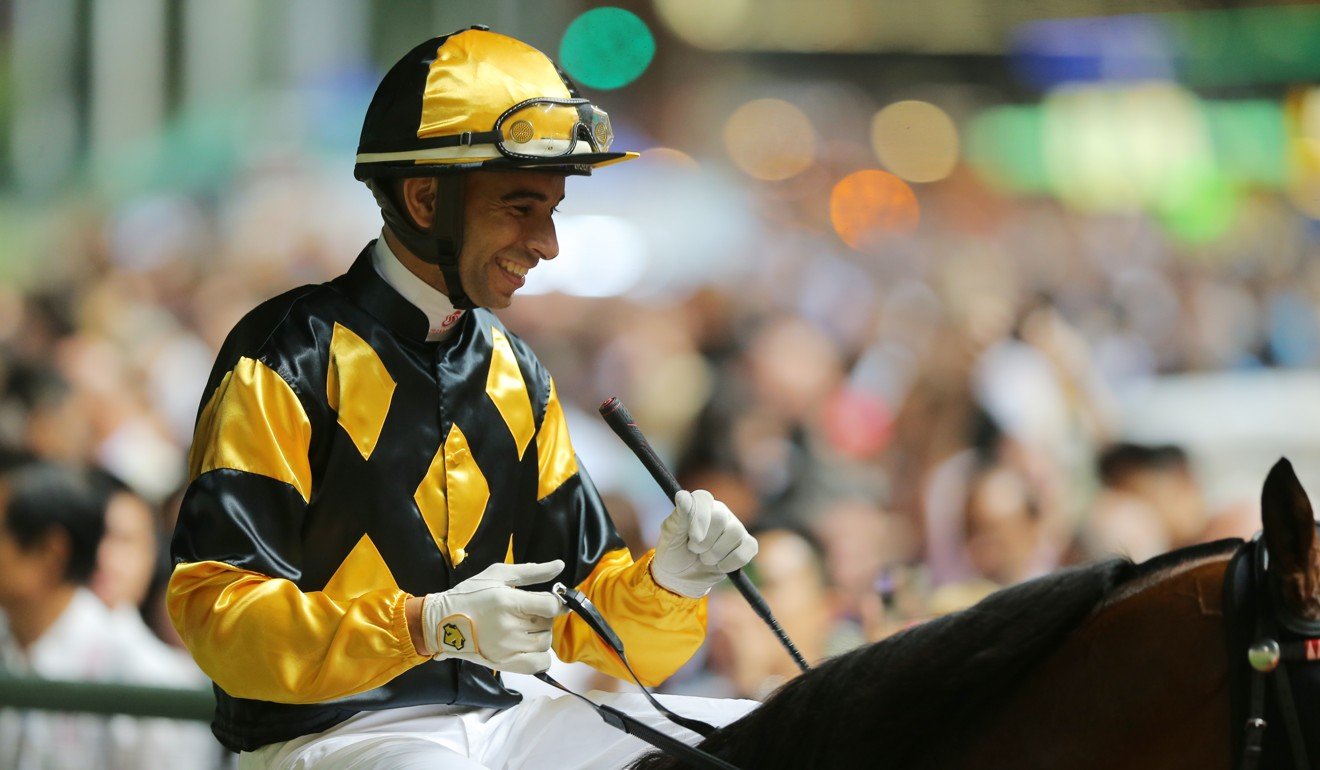 The Hong Kong-bound Hayes bought a significant share in Constantinople to bring him to Australia after the horse won two races under legendary trainer Aidan O’Brien.

Jockey-turned-trainer Douglas Whyte was robbed of two wins aboard Chater Thunder two seasons ago, but got one back at Sha Tin on Sunday.

The 13-time champion jockey had done all the legwork with the former David Ferraris-trained galloper before a victory on the all-weather surface in 2018 but was unable to ride the then four-year-old due to suspension.

The French-bred galloper had shown no form in Hong Kong before Whyte advised Ferraris to run Chater Thunder on the all-weather surface. 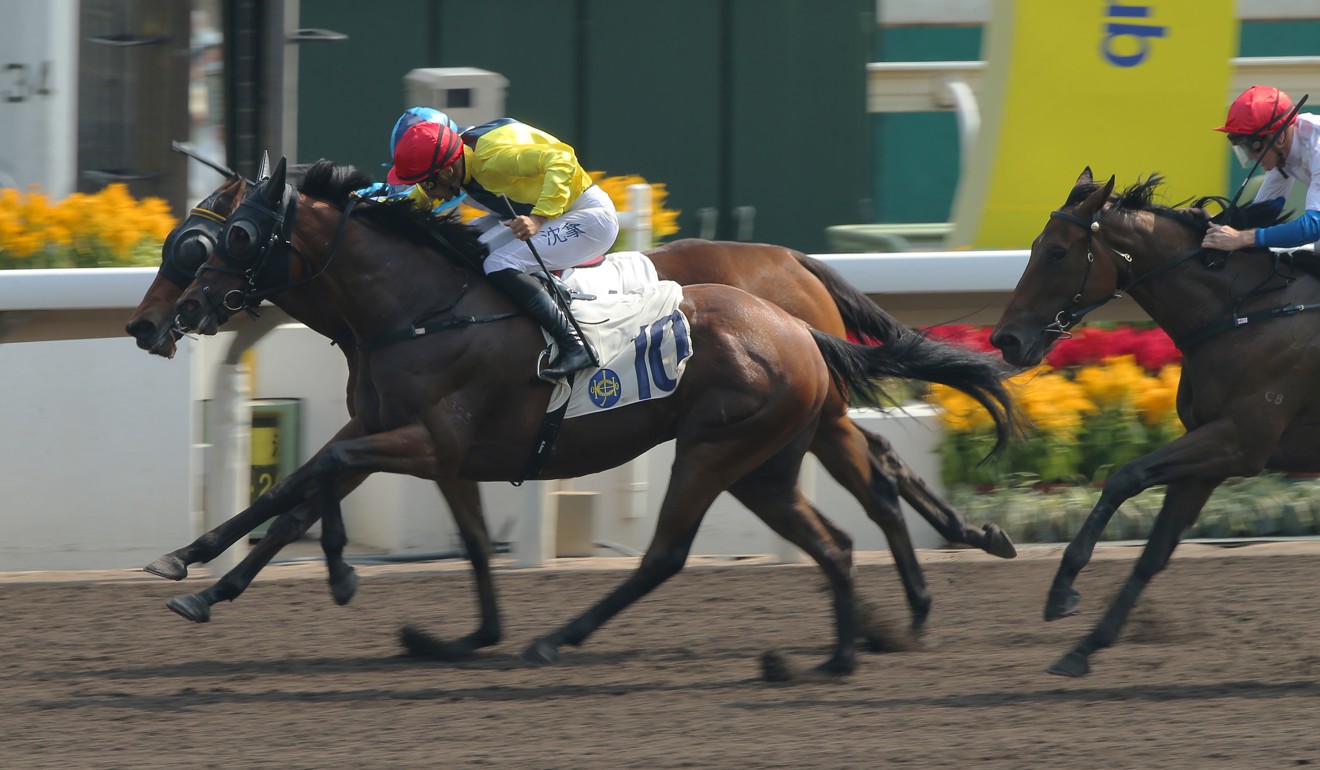 “He is a horse that I have been associated with, I rode him in his first couple of starts in a race and I gave my opinion that he would handle the dirt, and we put blinkers on him,” Whyte said. “Only thing is I unfortunately got suspended that day and [Alexis] Badel picked up the ride and won on him.”

Badel went on to win once more on the horse in what was his last victory before Sunday’s breakthrough.

“He has been a work in progress, he had his fair share of problems back in the stables and it has taken a bit of patching up to get him right,” Whyte said.

“So he is a horse I have had a bit to do with, it is very satisfying to get a horse like him to want to put his head out.”

The breathtaking performance of Japanese filly Almond Eye in the Group One Tenno Sho Autumn (2,000m) sure caught the attention of many in Hong Kong.

The superstar four-year-old is nominated for the Group One Hong Kong Cup (2,000m) and is a live chance of coming for the HK$28 million feature if her connections elect to bypass next month’s Group One Japan Cup (2,400m). 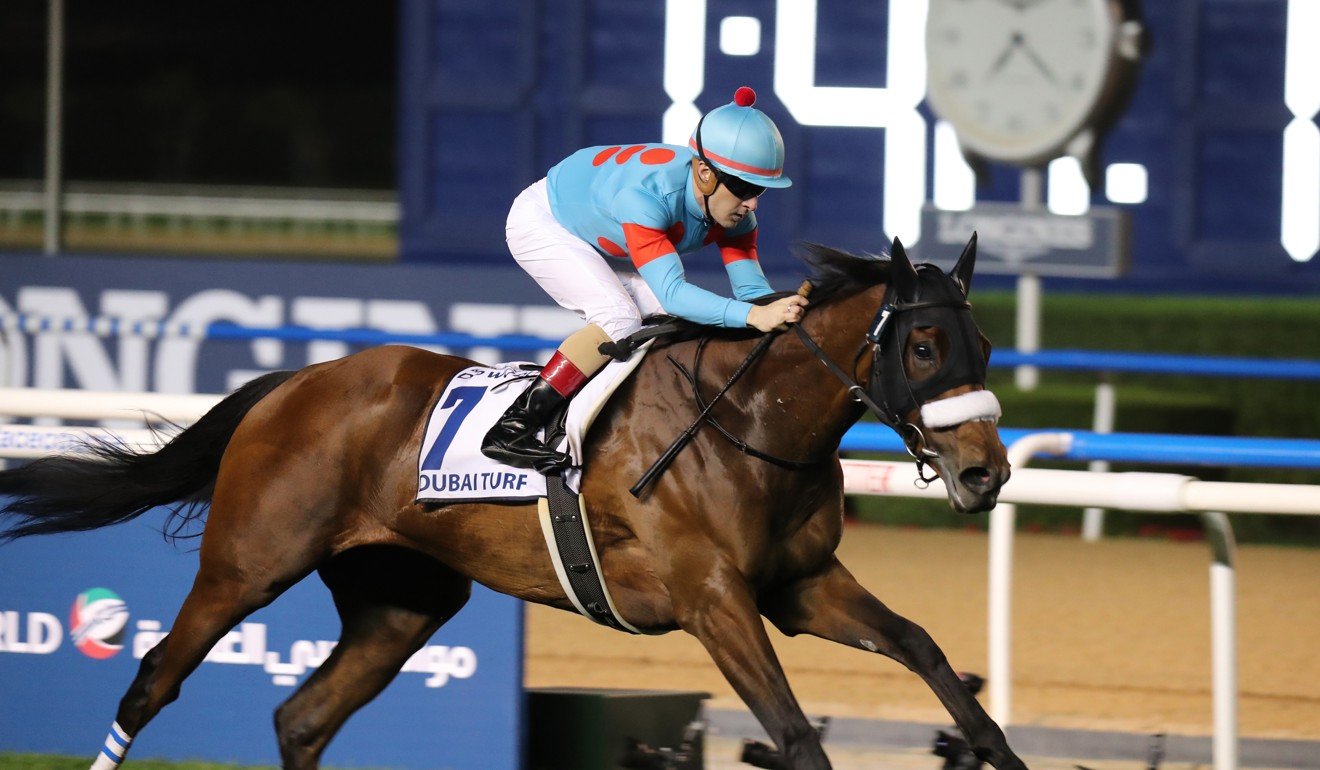 Hong Kong could make the perfect meeting point for Saturday’s Group One Cox Plate (2,040m) winner Lys Gracieux as well, with the mare nominated for both the Cup (2,000m) and Vase (2,400m).

The two-time Hong Kong placegetter will be forced to return to Japan for quarantine requirements before a decision can be made on a possible trip to Hong Kong.

Trainer Caspar Fownes joked he would like to see Almond Eye steer clear of Hong Kong with his up-and-comer Rise High on a path to the Hong Kong Cup. “We’ve always known she’s [Almond Eye] a superstar – she’s the real deal. Hopefully they’ll go to the Japan Cup. I’ll send them a message ‘why would you take the chance of travelling her?’,” he laughed.

Australian jockey Blake Shinn had two Hong Kong winners on his resume this season but there was a glaring omission before Sunday’s meeting – one at Sha Tin.

The Australian righted that wrong in the very last fixture of the all-weather track meeting in the Class Three Guangzhou Handicap (1,200m) aboard Seven Heavens and his delight was there for all to see.

Shinn has not been short on opportunities in Hong Kong and has been knocking on the door for some time and trainer Caspar Fownes could not have been more delighted that he was able to get the job done for one of Hong Kong’s biggest owners, the Siu family. 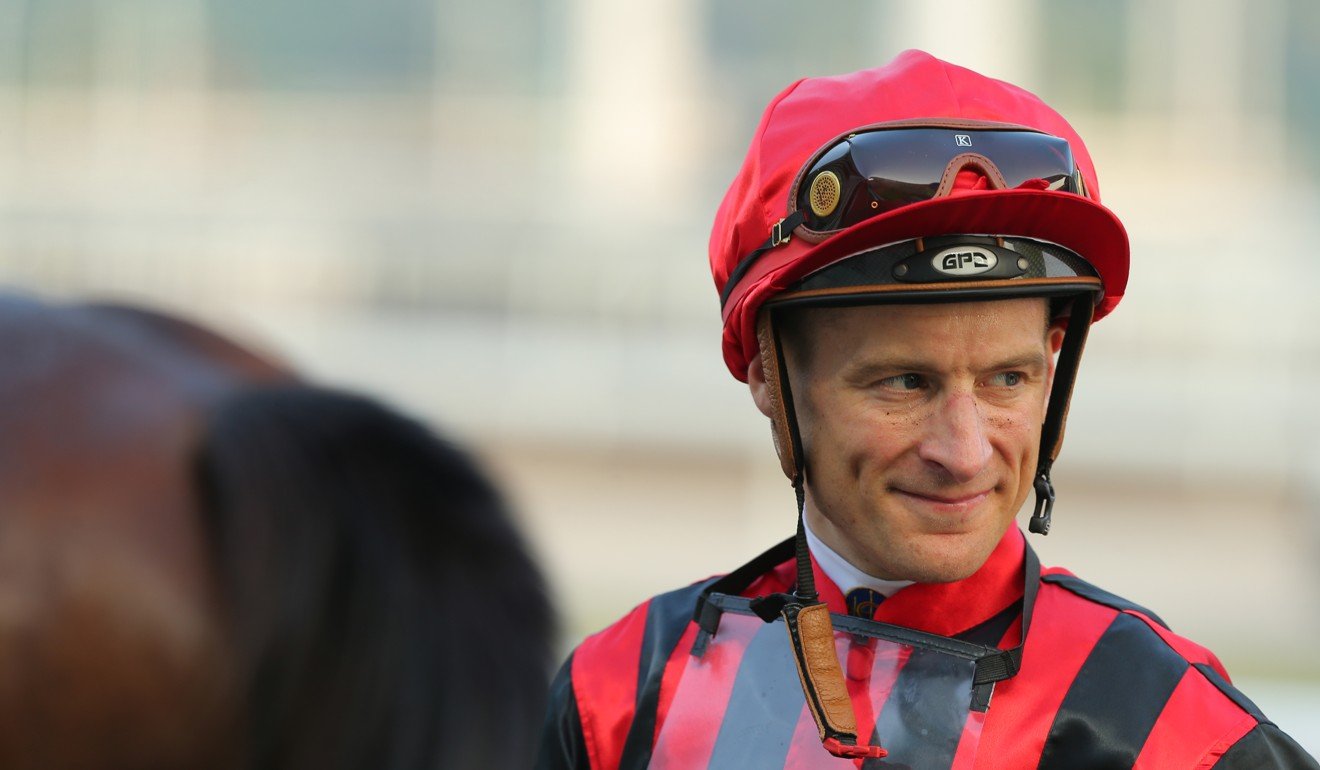 “It’s great for Blake, I’m very happy for the owners, they’ve been very good supporters to me and we’ve just had a little bit of bad luck in recent times, but it’s the racing game, everything turns around and hopefully that’s the start of it,” he said.

“We’ve bought a nice horse for them in the summer [Arrogant], he had a little bit of a setback but he’s over it now, and hopefully we can go forward and get him to the Derby.”

Sanna off to a strong start

Jockey Alberto Sanna must hardly know himself at the moment with the in-form jockey enjoying his best start to a Hong Kong season.

The Italian only managed six winners in an injury-interrupted campaign last term but has already matched that figure just 14 meetings in this time around.

Sanna, known for his willingness to put in the hard yards, has struck up a winning combination with new trainer Douglas Whyte, with the pair combining for four of his wins, including Chater Thunder on Sunday. “It’s a great feeling. Riding winners makes you ride better and with more confidence,” he said.

“I’ve been working hard in the mornings and it’s good because I’m getting the support. Two winners on Wednesday, a winner today – it makes you work harder to find better rides in the future.