The Frenchman hits the ground running in his two-month stint, saluting aboard the Danny Shum-trained Charity Go 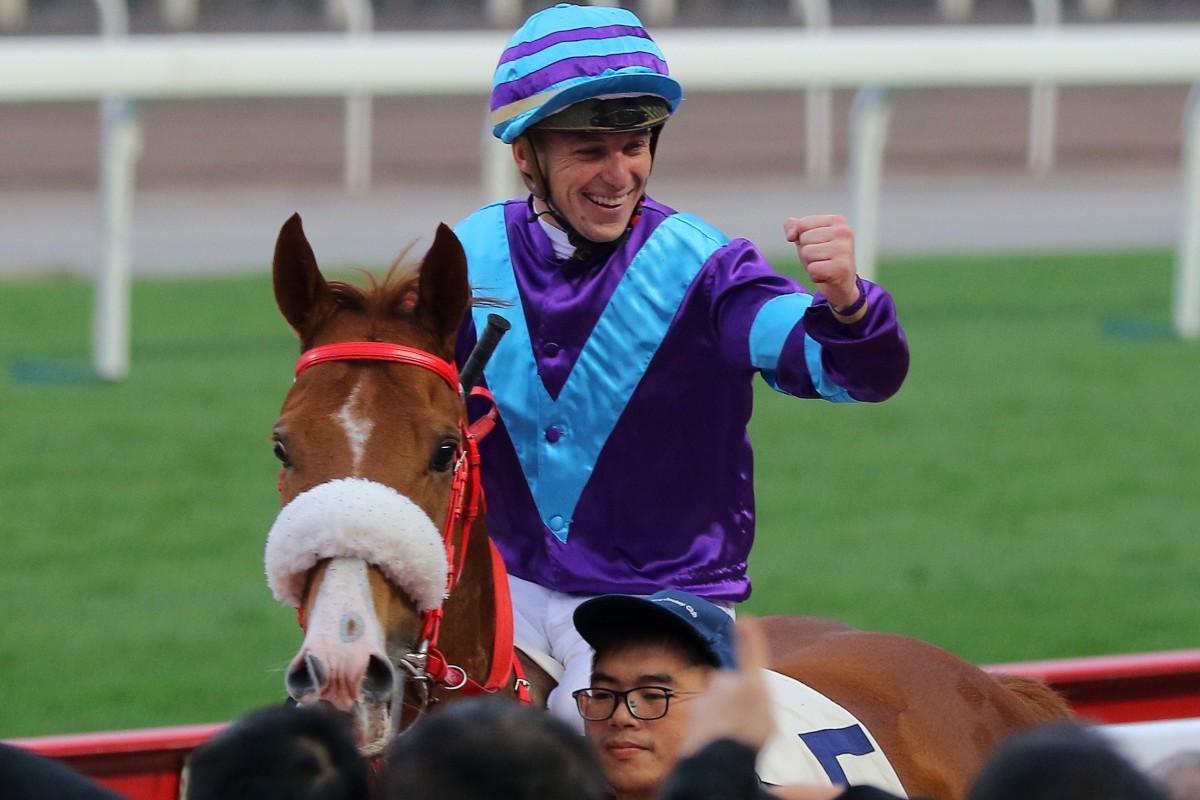 Tony Piccone knew he liked Hong Kong racing before he arrived at Sha Tin and his feelings only grew on Wednesday, with the Frenchman riding a winner to cap an impressive first day in the saddle.

Just days after arriving in Hong Kong for his two-month stint, Piccone opened his account aboard Charity Go in the Class Three Flame Tree Handicap (1,600m) while also producing two thirds from his four rides.

“Before today I liked Hong Kong, now I love it,” Piccone said. “It’s very important for me on my first day in Hong Kong, four rides today for two thirds and a winner – I’m very happy and I hope to continue.”

Piccone made his presence felt in the opening event of the day, finishing third aboard Ricky Yiu Poon-fai’s Colonel before booting rank outsider Party Everyday into third at $108 in race four.

He finished back in the field aboard the David Ferraris-trained Unite Spirit in race nine before going on to win with Charity Go in the last event on the card, admitting his confidence grew throughout the day.

“It’s difficult because I had never ridden here and I don’t know the jockeys and horses, but after one or two races I was OK,” he said.

Many new jockeys arrive in Hong Kong with high hopes and soaring confidence and Piccone was no different, however – unlike so many others – he has backed it up with an early winner and says the immediate breakthrough comes as no surprise.

“Today I had a good ride, it’s easy with a good horse,” he said.

Piccone delivered a patient ride aboard Charity Go, going back to last from barrier 13 before weaving his way through traffic in the straight and grabbing leader Smart Patch on the line.

“When I got in the middle of horses he was very happy and travelled nicely come the finish,” Piccone said.

It was a significant form reversal for the Danny Shum Chap-shing trained Charity Go, with the five-year-old breaking his maiden at start 14 after finishes of 11th, eighth, 10th and 10th this season.

Man of the moment Douglas Whyte started the new decade exactly how he finished the last one – winning.

The jockey-turned-trainer had the first winner of the day at Sha Tin on Wednesday in the Class Four Palm Handicap (1,200m) with veteran galloper Iron Boy after finishing 2019 with a winner thanks to Last Kingdom on Sunday.

He backed it up just an hour later with the promising Super Wealthy in the Class Three Chinese Banyan Handicap (1,200m), who arrived in comfortable fashion under in-form Frenchman Alexis Badel.

With a double on the day, Whyte took his season total to 19 and has well and truly announced his arrival on the training scene.

“It is definitely sentimental, the last winner of last year and the first winner of this year, it is a good feeling,” he said.

With a record of three wins from 47 starts before Wednesday, Iron Boy was not without his convictions, but Whyte said some quick thinking after a recent change in weather inspired the victory.

“He is getting a bit tired of being a bridesmaid and doing all the catching so I brought him to Sha Tin now that there is a bit of rain around and gave him a chance with the longer straight,” he said.

“I had only been going to the Valley because there had been a bit more give in the ground.”

For a split-second it looked as if new jockey Tony Piccone was going to kick his Hong Kong career off in perfect fashion when he loomed up on Colonel before rival Karis Teetan took the prize on Iron Boy.

As an eight-year-old racing against a host of younger horses, Whyte said he was wary of what they would be able to produce.

“I knew there were going to be younger horses here but he is an old, mature, well-weathered horse and he has a lot of experience so they would have had to have been very well educated to beat him,” he said. “He is an old man, he knows his job and he got a beautiful ride.”

Punters left Sha Tin happy on Wednesday, with five favourites saluting at the annual “lucky start” race meeting, but it was rank outsider McMunigal that may have provided the biggest thrill.

The David Hall-trained galloper romped home at $147 to become the second-longest priced winner for the season and while he admitted he missed out on the huge odds, Hall suggested McMunigal’s owners may have cashed in.

“They are pretty loyal owners so they might have had a small ticket, but certainly not the trainer,” Hall laughed.

“They certainly were a bit worried, they didn’t want to retire him but the rating was plummeting so they were getting a bit scared, but I think they’d be pretty loyal.” 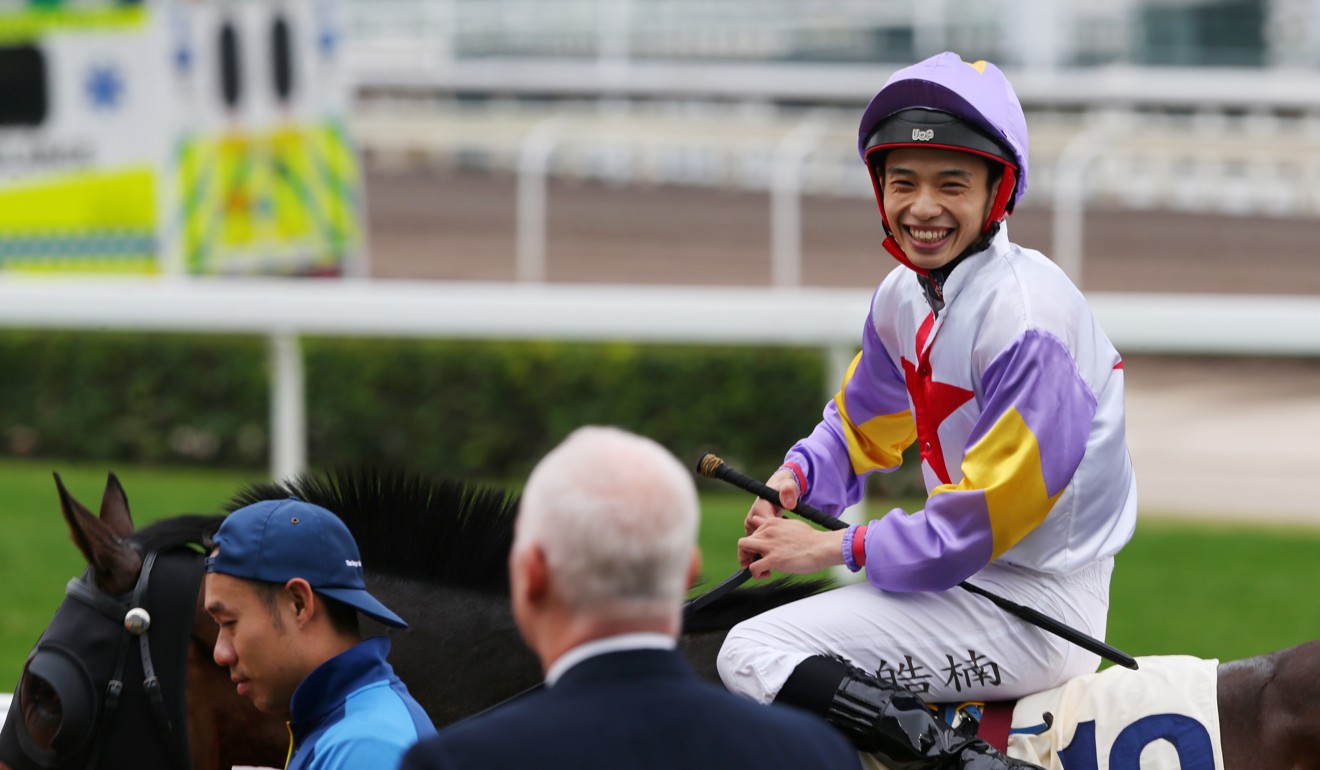 While McMunigal had only finished better than 10th three times in 14 starts and never better than fifth, Hall wasn’t completely taken aback by his win in the Class Five Yew Handicap (1,800m).

“Of course it was a bit of a surprise but on Friday morning he trialled quite well. It was the first time I had seen him show a willingness to want to go and with the blinkers back on I thought there was a chance,” Hall said.

“The entries were open on Friday after he trialled and showed something positive, so I thought while he’s in a good frame of mind I’ll get him to the races.”

Jack Wong Ho-nam was in the saddle and snapped a win drought dating back to October 27, notching only his third winner of the term to ease some pressure.

“It’s been a tough year, it’s very hard to get a proper ride but at least I got a winner and I’ve got a bit of my confidence back,” Wong said.

“The horse had a very good trial and today everything suited him perfectly. I’m very happy he ran well and hopefully I can carry on in future meetings.”

Danny Shum Chap-shing’s classy sprinter Lucky More made up for a last-start flop when he delivered for punters at Sha Tin on Wednesday.

The three-year-old colt arrived in Hong Kong with a big reputation after trialling well in Australia before being sold, but has been hit-and-miss since arriving.

After going under as a $1.7 favourite over the straight 1,000m last month, punters kept the faith and backed Lucky More into $2.3 to beat his rivals.

By the time jockey Zac Purton had cantered up to leader Quadruple Double, the race was all but over with the champion rider hardly moving on the promising type.

“In the second sectional last start, they pushed him too hard and he is a colt and he didn’t like it at all,” Shum said.

“Today, we raced him over 1,200m so he could take his time, work into the race and we saw the result. I am very confident in this horse and so is Zac.”