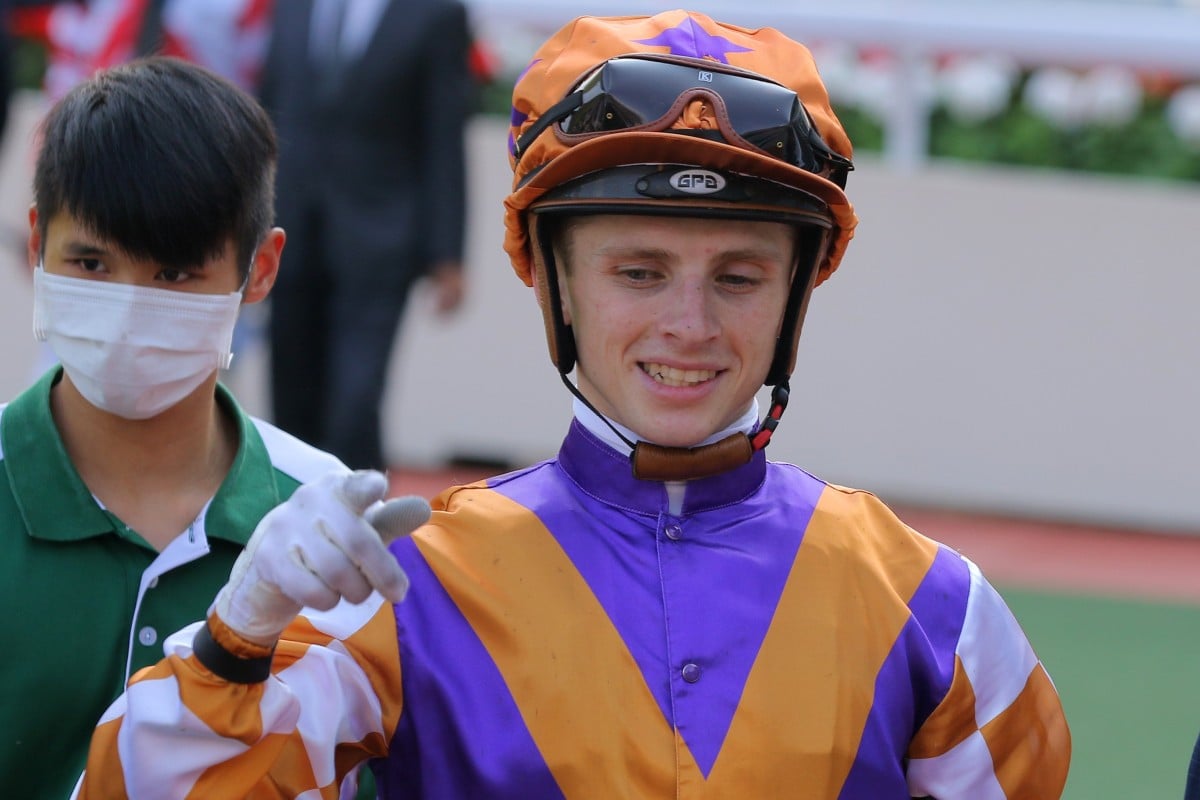 Lyle Hewitson’s six-month stint at Sha Tin didn’t pan out exactly as he hoped, but to show the quality of the man, he was still smiling as he walked out of the jockeys’ room on Sunday.

A two-time champion in South Africa, the 22-year-old was never able to build any real momentum after a two-week suspension (incurred in his home country) derailed him early in the season.

Hewitson wasn’t afforded many opportunities after that and has been forced to battle on a host of long-shots, finishing his contract with three wins, nine seconds and 11 thirds from 251 rides and a tick over HK$7.3 million in prize money.

In many ways, his day on Sunday – nine rides for a second on Family Leader (at $81), a third with Larson (at $40) and a fourth aboard Happy Alumni (who started at $7.3 but was a late pick-up ride) – summed up his time in Hong Kong.

The overall results belie his ability, but he is not one to look back with anger or frustration.

“It’s been a test of character, so I’ve learned a lot about myself but obviously I’ve had to improve as a rider as well,” Hewitson told the Post. “It will stand me in good stead for the future.

“So looking back, although maybe not results-wise, it’s been a positive time.

“I’ve had an optimistic view of things rather than carrying my head on the floor, so I’ve gone about it the right way and whatever the future holds, I know it will be successful.”

Last meeting today in HK at #Shatin Racecourse this time around before jetting off to Japan on Monday! ️

Hewitson wastes no time beginning his next adventure – a two-month contract in Japan.

He flies there on Monday, goes through all the paperwork (undergoing a medical, setting up a bank account etc) on Tuesday before two days of trackwork at the Miho training centre.

Hewitson then goes into lockdown on Friday night before the weekend’s cards, where he has secured a Group Two mount on the Sunday.

“I can’t wait to sit on some good stock and get some confidence back in my riding,” he said. “I think it’s going to be a good move to experience something new and succeed a bit more.”

Hewitson hopes to return to Hong Kong for another stint down the road and is particularly thankful to those who kept backing him in.

“It’s very easy to be negative towards somebody that’s not having a lot of success” he said. “But I think everyone in Hong Kong has been really good to me and it’s helped keep my spirits up.”

Alex Lai Hoi-wing snapped a two-month drought as E Star overhauled Baltic Success in the shadows of the post to take out the Class Three Kwai Shing Handicap (1,200m).

The 36-year-old last graced the winner’s circle on December 29 – a run of 69 outs – when he guided Mighty Giant to victory and he was all smiles as he returned to scale aboard Manfred Man Ka-leung’s four-year-old.

It was the New Zealand import’s third win from 13 starts, getting the prize at a juicy $20. 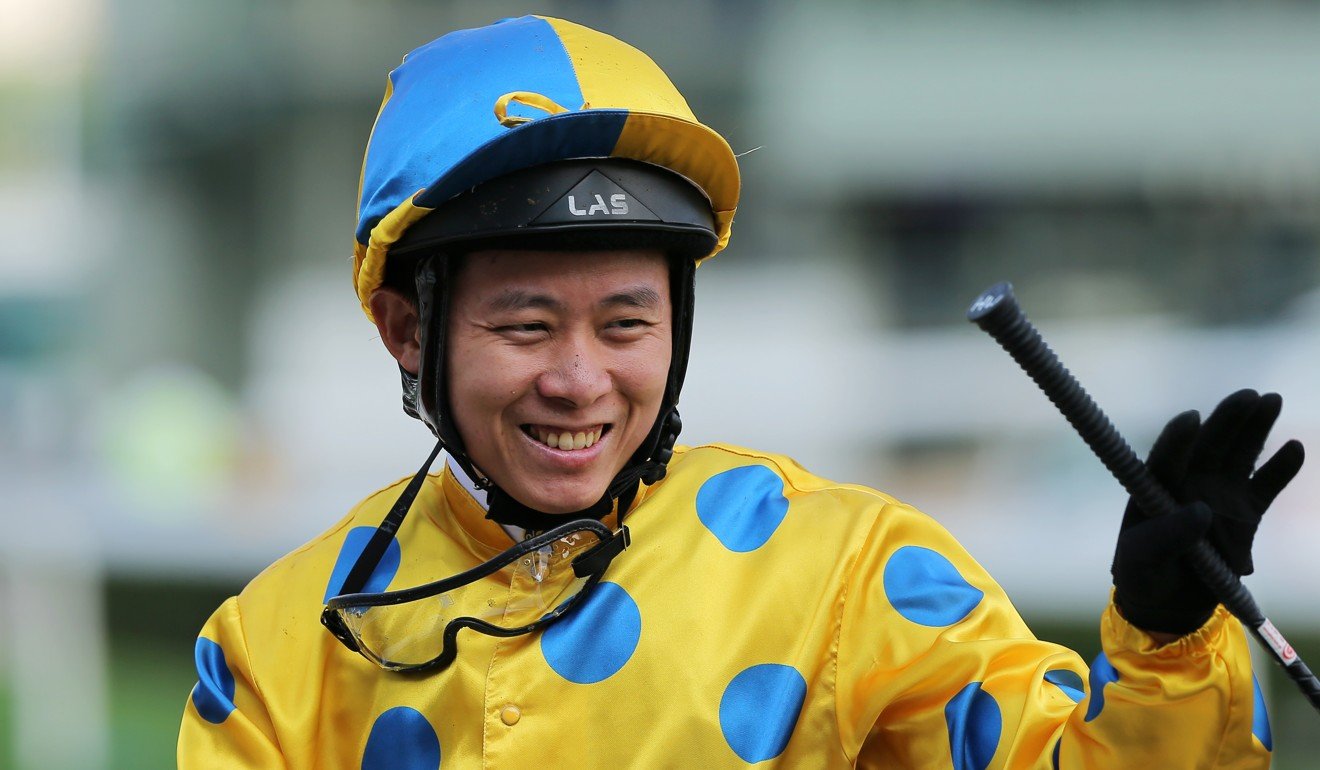 The victory was Lai’s fourth of the campaign and the first time the trainer and jockey had combined for a win since Unique Joyous on April 5, 2017.

The race was a disaster for short-priced favourite Inner Flame, who smacked his head into the side of the stall when the gates opened and sat at the tail of the field throughout.

E Star’s win completed a double for Man, who also tasted success with Ever Laugh.

In-form jockey Vincent Ho Chak-yiu was forced to sit out the last seven races on Sunday, feeling the effects after being sent to the turf by Chaparral Star before the second event.

The five-year-old gelding dislodged Ho on the way to the barriers before galloping off down the back straight and eventually being scratched.

Ho got back to his feet and competed in the following race, before being stood down by the Jockey Club’s medical officer after aggravating an existing knee condition.

He wouldn’t have been feeling any better after Francis Lui Kin-wai’s Top Score captured the ninth race at $42.65 with Matthew Poon Ming-fai replacing him in the saddle.

Ho will be declared for Wednesday’s meeting at Happy Valley, so it is expected he will take part.

Shinn back in the Sydney spotlight

After hitting a bit of a flat spot, Blake Shinn enjoyed a bounce-back weekend with winners in both Australia and Hong Kong.

The 32-year-old returned to Sydney for a hit-and-run mission on Saturday, collecting the Group Two Skyline Stakes on Mamaragan for trainer John Thompson.

Two countries, two days, two wins! @blake_shinn returns from his successful hit-and-run mission to Australia and drives out the Manfred Man-trained Ever Laugh in a thrilling finish. #HKracing pic.twitter.com/hbQUh7sicj

Shinn took that good form to Sha Tin on Sunday, breaking a run of outs that had extended to 73 when he lifted Ever Laugh to victory in the Class Four Shek Yam Handicap (1,600m).

He almost made it a double on Baltic Success but was edged out late by E Star in the eighth event.

Ricky Yiu Poon-fai is now two wins clear in the race for the trainers’ title after a double at Sha Tin on Sunday.

The 62-year-old kick-started his day with the promising Eternal Harvest, who led from barrier to box in the Class Four Shek Lei Handicap (1,200m), before doubling up with Allied Agility in the sixth race, which was apprentice Alfred Chan Ka-hei’s first win as a seven-pound claimer.

Yiu now has 41 wins from 49 meetings and holds a narrow edge over the resurgent Lui.

He wasn’t on track to enjoy his success though, instead he was down in Melbourne at the Inglis Premier Yearling Sale where he bought three lots for A$490,000.

He wasn’t the only Hong Kong presence at the sale with the Jockey Club buying two youngsters of their own for A$790,000 while Man got a yearling for A$80,000.

After outriding his 10-pound claim on Wednesday night, Chan tasted more success with Allied Agility, but his day ended on a flat note after earning the ire of stewards.

The 25-year-old pleaded guilty to careless riding aboard Endearing in the ninth race and was outed for two meetings and hit with a HK$15,000 fine.

It was a busy day for stewards, who were also forced to withdraw Benno Yung Tin-pang’s Ka Ying Legend from the eighth event after a pre-race urine sample found the prohibited substance clenbuterol in his system.

A further urine sample was taken from the five-year-old and the matter was adjourned until a date to be fixed.