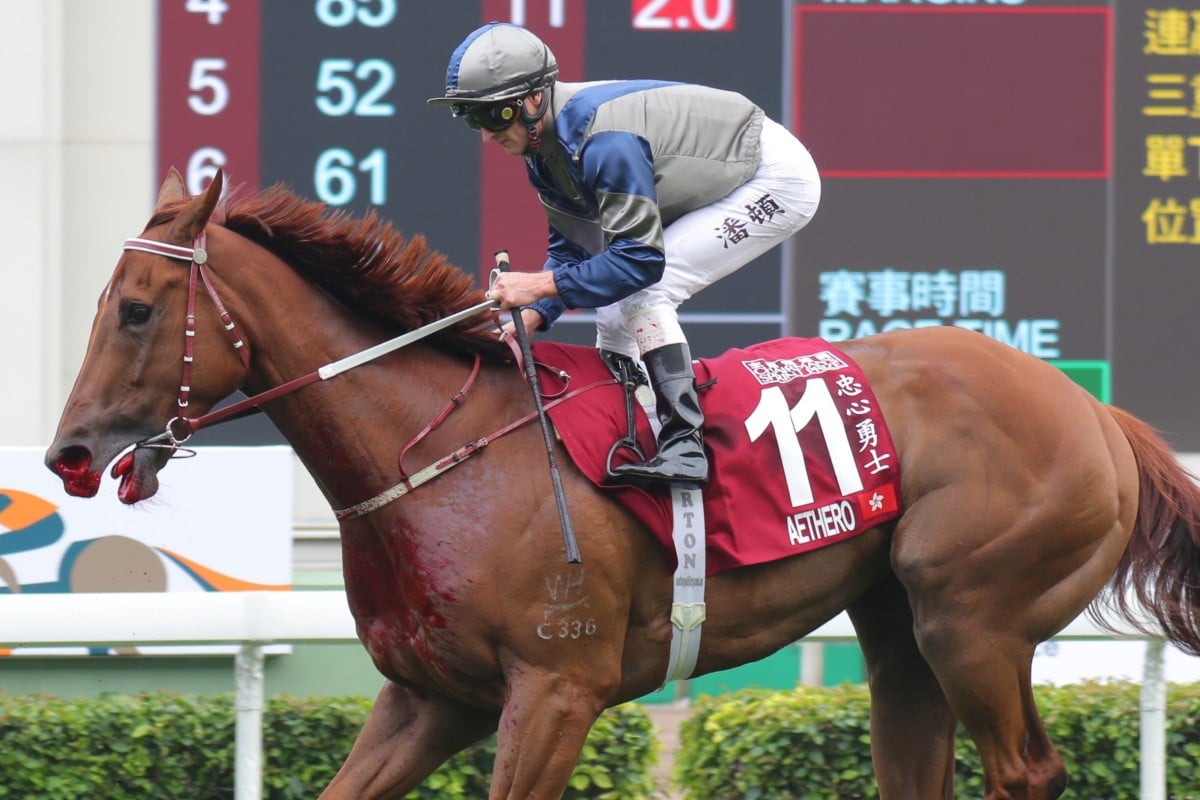 Zac Purton pulls up Aethero after he bled badly in the Group One Chairman’s Sprint Prize at Sha Tin. Photos: Kenneth Chan

Departing trainer John Moore will launch an audacious bid to take Aethero back to Australia with him at the end of the Hong Kong racing season.

The precocious three-year-old bled badly after being sent out a $2 favourite in Sunday’s Group One FWD Chairman’s Sprint Prize (1,200m) and Moore believes the wide open spaces of Australia would be the best place to let him recover.

Moore has made no secret of his plans to begin training in Sydney after his forced retirement from Hong Kong at the end of the season and believes Aethero could flourish Down Under.

“My opinion and what I will be recommending to the owner is that Hong Kong, with the atmosphere the way it is and so fourth – we would be able to do more things with him in Australia,” Moore said. “He’s bled very badly so from that I will be recommending to go back to Australia, where he can have a good spell in a paddock with the air so much better there and see if we can revive him.”

Aethero has been somewhat of an enigma during his brief career in Hong Kong but he will now have a prolonged break before being allowed to race again.

After leading the field up to the turn in Sunday’s Group One feature, the three-year-old was quickly beaten in the straight with jockey Zac Purton realising the severity of the situation.

“The bleed was very bad, Zac said that it was one of the worst he had seen,” Moore said. “He’s only young so from my point of view and looking at the intensity of the bleed there’s a chance it will happen again so let’s wait and see what transpires.” While Moore was left to rue the performance of Aethero, he still briefly looked the winner in the race thanks to Thanks Forever. The four-year-old, piloted by Blake Shinn, motored home from last to finish third in the HK$18 million feature.

“He was enormous Thanks Forever, he had to make up a lot of ground coming from the back of the field,” Moore said. “Had he drawn a better gate, I think he would have been close to the money, it is one of those things. He couldn’t sustain it, he hit the front there and I thought he was going to go on with it.”

As a dual Group One placegetter, Thanks Forever will be highly sought-after by rival Hong Kong trainers.

Apprentice Alfred Chan Ka-hei enjoyed one of his better days in the saddle in Hong Kong on Sunday thanks largely to legendary jockey-turned-trained Douglas Whyte.

The 13-time champion has been keen to use apprentice riders during his time as a trainer but says he was forced to “suspend” Chan for a few weeks after he chose not to ride to instructions.

Returning from his break on Sunday, Chan booted home Relentless Me in the Class Three Fairy King Prawn Handicap (1,200m) and General’s Delight in the Class Two Bullish Luck Handicap (1,600m) with “10 out of 10 rides”. 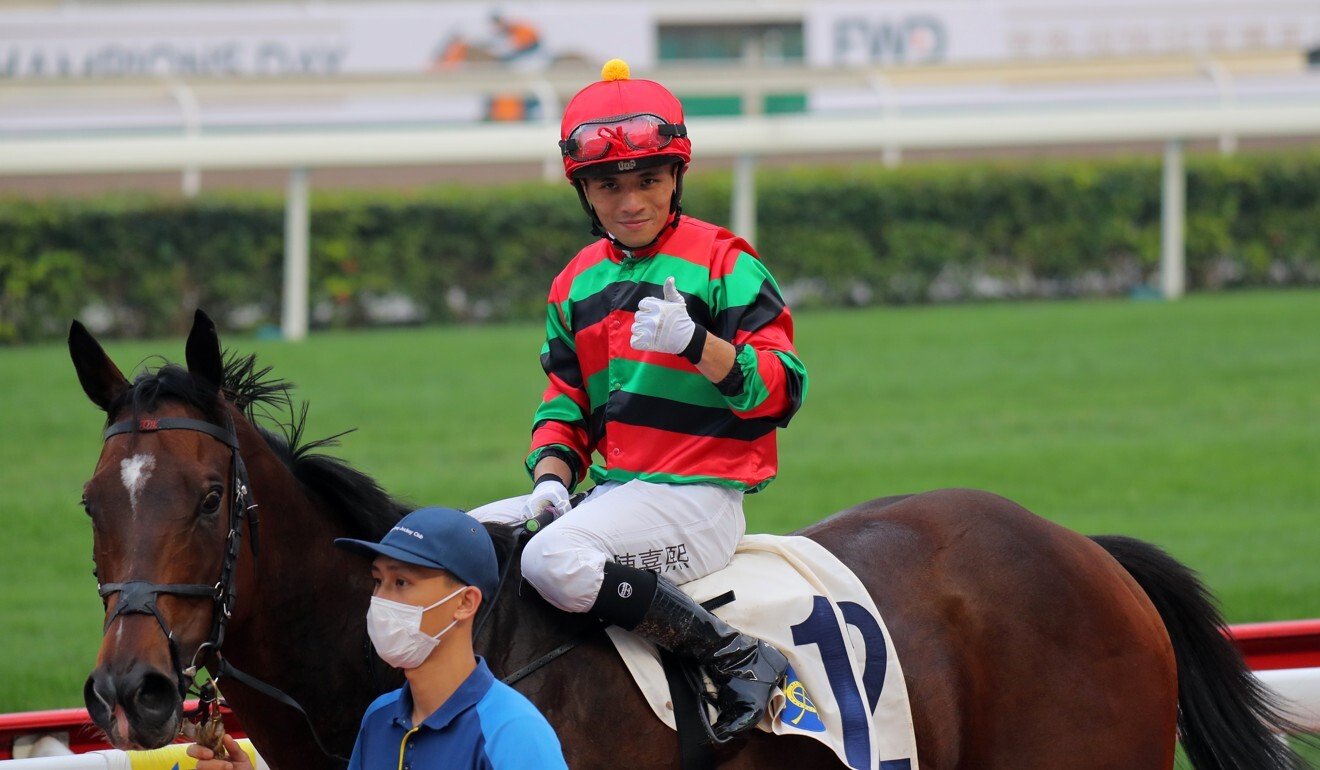 “I suspended him for a while,” Whyte said. “He had his own ideas about a few races where I had a different idea.

“We have had a good discussion and today I can say both races were 10 out of 10 in terms of listening to instructions and riding the way he should be riding – he can ride.

“On Relentless Me, he listened to a tee. I said ‘when they slow down, you pull out and go’ and that won him the race, everyone got caught up, trapped and he pulled out and made ground around them.

“Good on him and if he continues to take advice and ride the way he did today, he will be getting a lot more support from trainers.”

Whyte has now delivered four of Chan’s 15 winners this season. His win on General’s Delight marked his first Class Two win this season and the horse’s first win in Hong Kong after arriving from Australia with a big reputation. 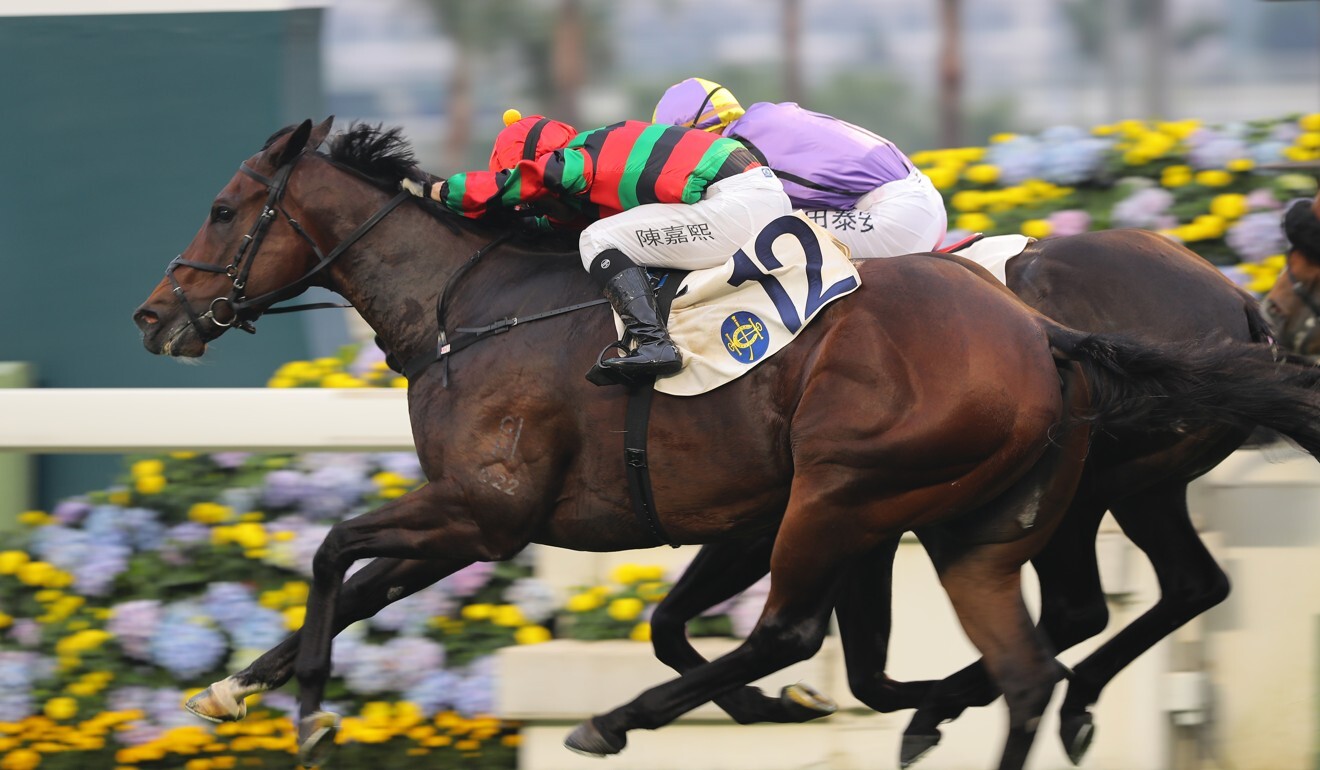 “Last start he was three-wide the whole way then he got chopped out, I don’t think anyone takes into account what a big animal he is,” Whyte said. “When you lose momentum like that, especially at the 300m, those horses struggle to pick it up again. Today the instructions were clear, go back to midfield or worse then pull him out at the top of the straight and he will give a kick.”

Whyte managed to train two of the top three in the race with Uncle Steve ($121) dashing home for third under Ben So Tik-hung.

Moreira puts on an undercard Show

While it was the first Group One day this season where Joao Moreira wasn’t front and centre in the features, the Brazilian still walked away with three winners to push his buffer over Zac Purton in the jockeys’ premiership out to three.

Moreira saluted aboard Chairman Lo, Fantastic Show and Computer Patch, with the John Size-trained Chairman Lo breaking through for his maiden win at start 15 after five seconds. 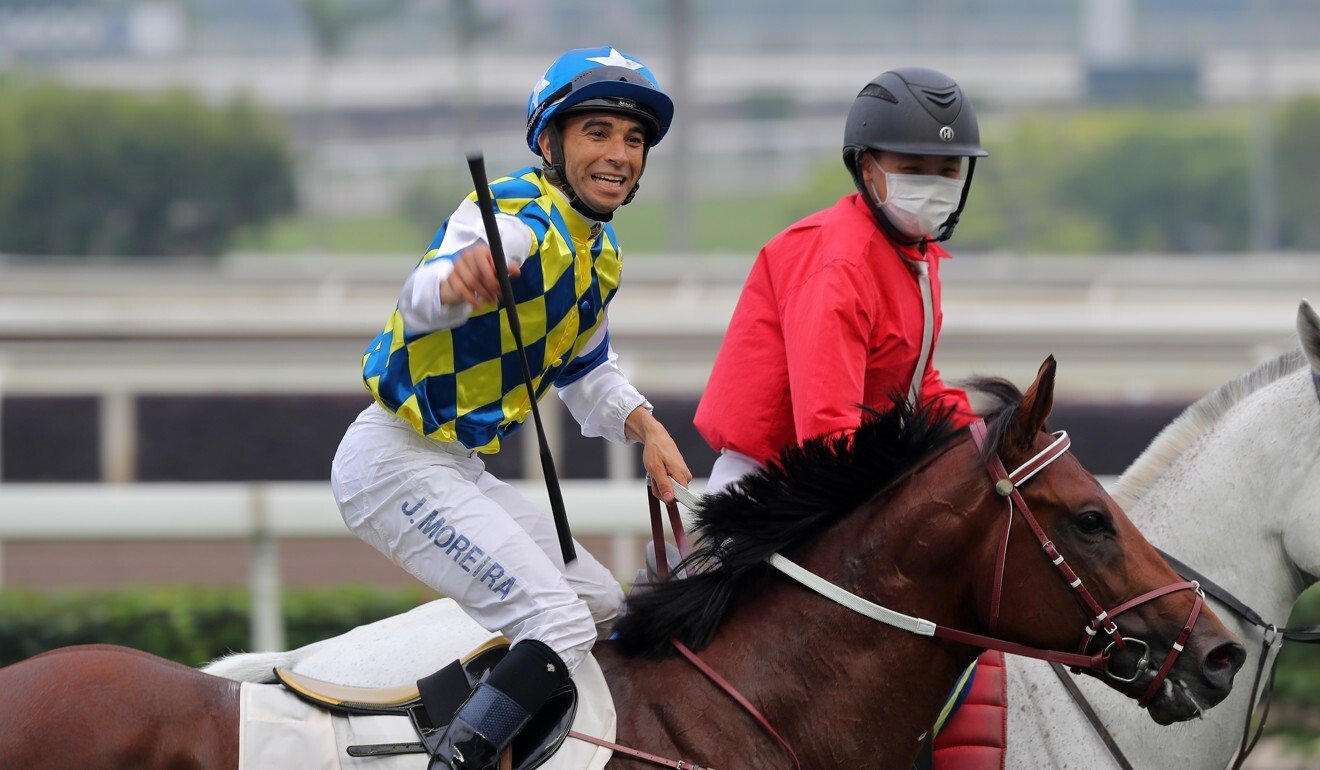 Fantastic Show and Richard Gibson’s Wellington entered the Class Three Vengeance Of Rain Handicap (1,400m) chasing a fourth straight win and it was Me Tsui Yu-sak’s five-year-old that prevailed.

“He’s capable and I know he is a very nice horse. In the class he’s been in lately he was always going to win if he does things correctly, but sometimes he can miss the start,” said Moreira, who was vigorous in his efforts to fire up Fantastic Show behind the gates. “Me Tsui and I discussed last start when he won, that if we were able to get him to jump out of the gates and get himself a little bit closer, he wouldn’t find it so difficult to win. I dug him up, I switched him on and he responded, he jumped out and put himself much closer than he was earlier in the season.” 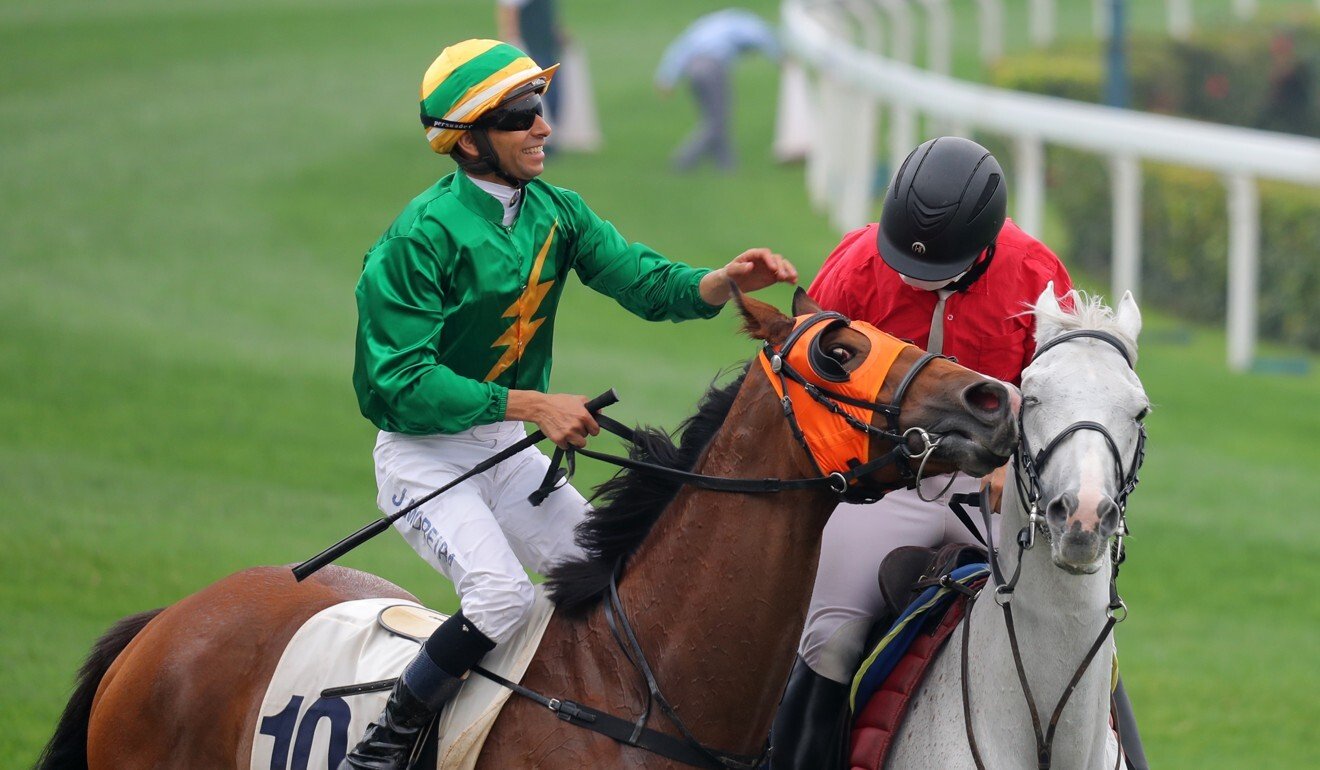 Computer Patch notched his third win at start seven in the Class Two Silent Witness Handicap (1,200m), saluting as the $2.40 favourite and giving Moreira the feel of a horse who is going places.

“He’s only three years old and to win in the class that he’s in when he’s not down the bottom of the weights, only good horses do that,” he said. “He’s far off the level he is going to get to.”