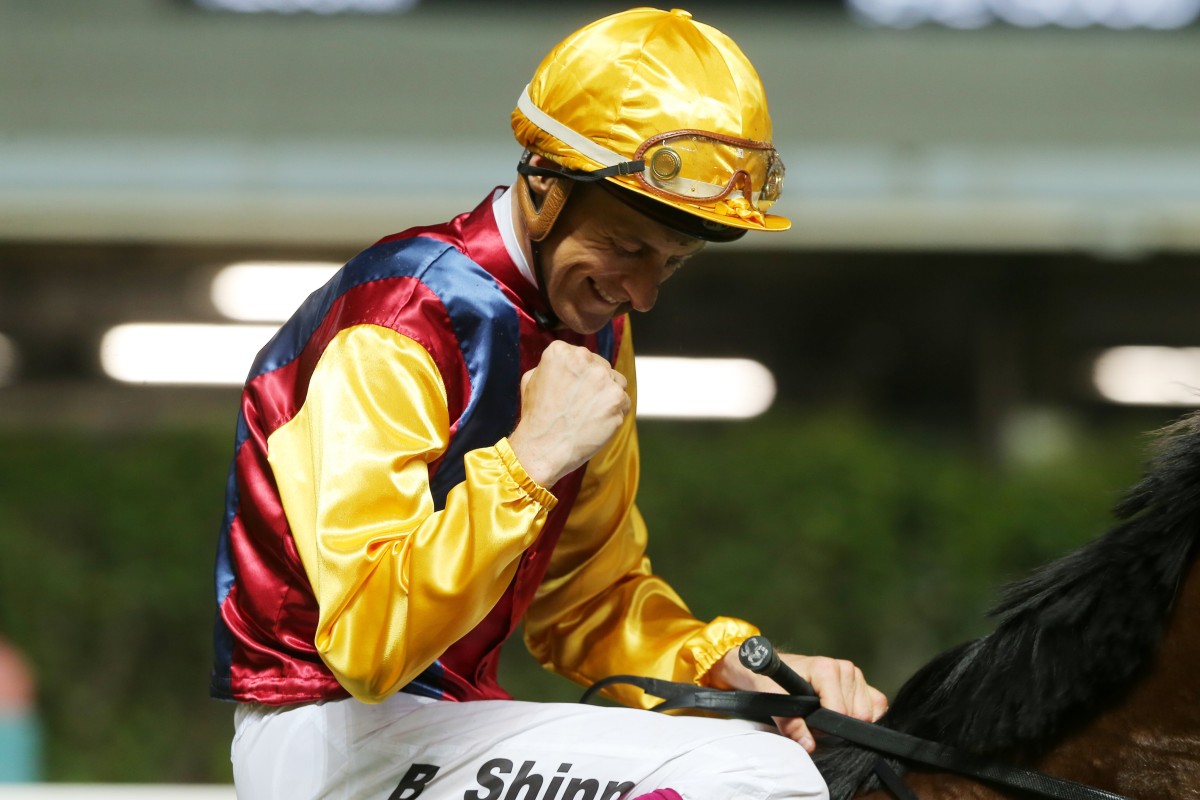 Blake Shinn delivered a brilliant rail-hugging ride to lift Daily Delight to victory at Happy Valley on Wednesday night, snapping his run of outs at 55 while securing a welcome confidence boost.

The 32-year-old had endured 13 placings since his previous win with Bear Again on April 8, but he produced a peach when it mattered on Douglas Whyte’s gelding in the Class Four Mount Collinson Handicap (1,000m).

Shinn didn’t go around another horse and it was the difference between winning and losing – the margin to second (Winner’s Heart) a short-head with We The South a neck back in third.

The win was the first for Daily Delight, a three-year-old who has continued to improve in each of his five career starts, but Shinn admitted it didn’t pan out as expected.

“It didn’t go to plan – Douglas wanted him closer than he was in the run but the horse didn’t break that well and that’s just the way it unfolded,” the jockey said.

“I was always confident he was going to finish because he was in a similar position as last time. The speed of the race was very fast so it was just a matter of plotting the right path for the horse to finish strongly and thankfully the runs opened at the right time.

“The horse has been running very well, he’s put the writing on the wall in all of his runs. He’s a nice horse on the rise, I’ve had a little bit to do with him and it’s just nice to retain the ride – I’m thankful for that – and get the job done on him.” The result was a much-needed one for Shinn, who has endured a tough debut season in Hong Kong with 11 winners now to go with an astonishing 41 seconds and 32 thirds. That ratio of winners to placings is unprecedented in Hong Kong this century.

Daily Delight’s victory provided some solace for the Australian, who had two runner-up results with Charity Wings and Honest Way earlier in the night.

“It was frustrating leading up to that race with two seconds but you’ve just got to be resilient, keep your head down, stay positive, believe in yourself – that’s what I continue to do,” said Shinn, who won the 2008 Melbourne Cup with Viewed.

“It’s just the way the ball bounces sometimes but you can’t give up. Thankfully in that race, the photo went our way.”

At the other end of the scale, John Moore continued his outstanding run of form, securing a winner for the seventh straight meeting when Beauty Happy upstaged his rivals in the eighth event.

The combination of Moore and Vagner Borges has proved lethal recently, with four wins and three placings from 16 rides. All those winners have come at double-figure prices – if you had a HK$10 (US$1.30) win bet on each of their starters you would have recorded a profit of HK$650 (US$83).

Moore is pleased he is able to help lift the profile of the four-time Brazilian champion and show him how to adjust to life in Hong Kong.

“I’m just trying to help him with respect to race tactics and what’s expected. I try to give some insight and he’s very open to criticism and where he can improve so from that point of view, things are going well,” the trainer said.

“He’s got a lot of rides coming up, I’m giving him opportunities. He has the components to make it in Hong Kong, he just needs to tweak a few things. He’s a welcome addition to the ranks here – he can ride light.”

The French ace secures his third Hong Kong brace as Surrealism gets off the mark in the nightcap. @francegalop @equidia #HKracing pic.twitter.com/YC0LZn9maP

The other recent expat addition to Hong Kong, Antoine Hamelin, continued the incredible start to his Hong Kong career, collecting a double with Victorious Leader and Surrealism to make it 11 winners from 10 meetings.

Meanwhile, Zac Purton and Joao Moreira continued their ongoing battle for the jockeys’ championship, the Australian pushing two wins clear after a double on Compassion Spirit and Victoriam, while the Brazilian saluted aboard Smart Leader.