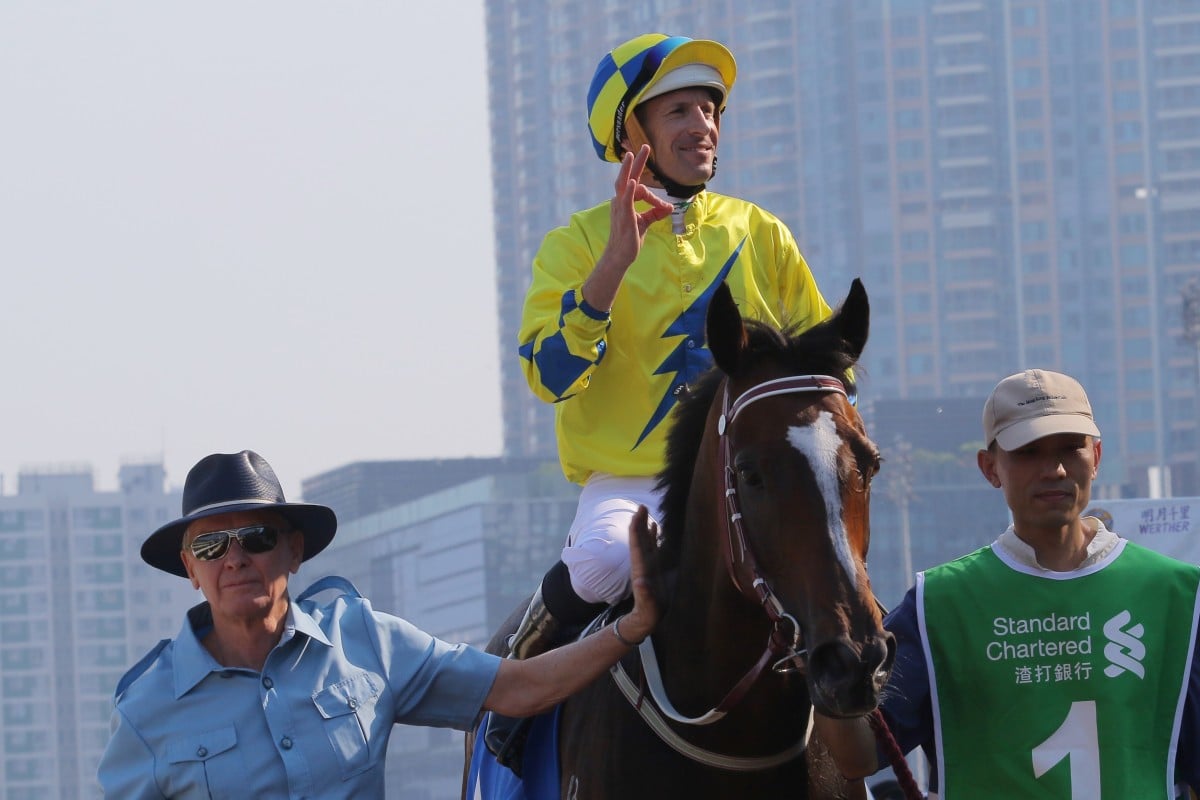 John Moore returns with jockey Hugh Bowman after winning the Champions & Chater Cup with Werther in 2017.

Legendary trainer John Moore is going into Sunday’s Standard Chartered Champions & Chater Cup (2,400m) “all guns blazing” in what will be his final Group One as a Hong Kong-based handler.

The 70-year-old has won the HK$10 million feature in six previous seasons while developing a reputation as a big-race specialist during his career, which has reached some dizzying heights.

Incredibly, Moore will saddle up four of the seven runners in the field, giving him a numbers advantage as he looks to topple hot favourite Exultant.

Fittingly, it is only Moore’s long-time sparring partner and six-time winner of the race Tony Cruz who is also represented. 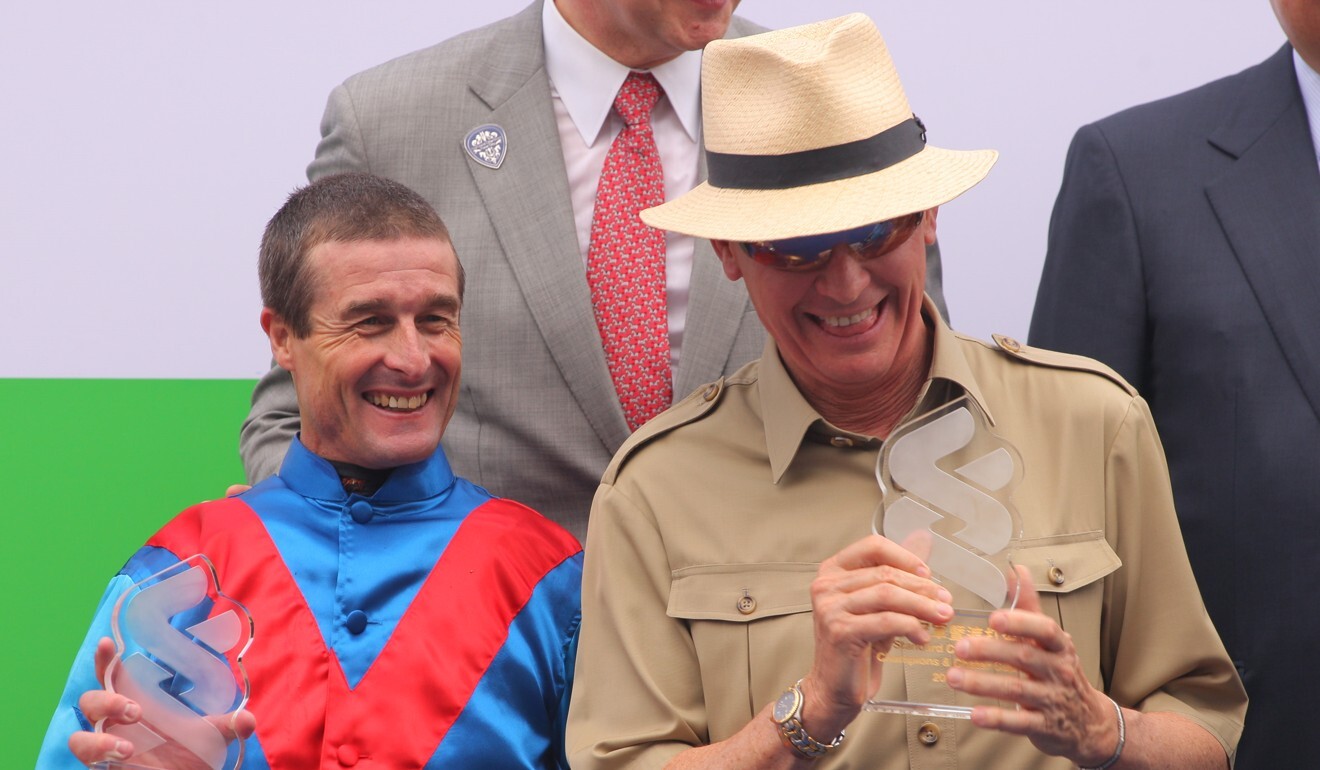 “It would be great to depart Hong Kong on a Group One win and as far as I am concerned we have a great chance of doing it,” said a typically optimistic Moore, who has Eagle Way, Chefano, Helene Charisma and Savvy Nine in the race.

“If the favourite [Exultant] doesn’t come with his A game, we will be coming all guns blazing.”

Moore has trained 68 Group One winners during his glittering Hong Kong career, putting him well clear of Cruz, who has amassed 50.

The Australian is being forced into retirement at the end of the season by the Jockey Club and remains an outside chance of contending for this season’s championship, 11 winners behind the leader Ricky Yiu Poon-fai.

While Chefano was able to comfortably take out the Group Three Queen Mother Memorial Cup (2,400m) three weeks ago, Moore expects improved performances from his other gallopers returning to set weights.

Weather is also set to play a key factor in the race with persistent rain threatening to dampen the typically firm Sha Tin track.

“Given that we may have some give in the ground on Sunday, you’d have to think Chefano – a South African horse – may enjoy it,” Moore said.

“And then the two [French gallopers] – there’s Helene Charisma, who likes the cut in the ground and Savvy Nine, I can’t see why he wouldn’t like it, they will think they’re back at Longchamp or somewhere like that enjoying the cushion in the track.”

With Cruz’s Time Warp in the race, Moore said he does not expect Chefano to be able to replicate his wire-to-wire victory from the Queen Mother Memorial Cup.

“With Time Warp there, Chefano won’t get his own way out in front,” he said. “There could be muddling pace early on when things are sorting out with who gets to the front and how it will effect those behind.” 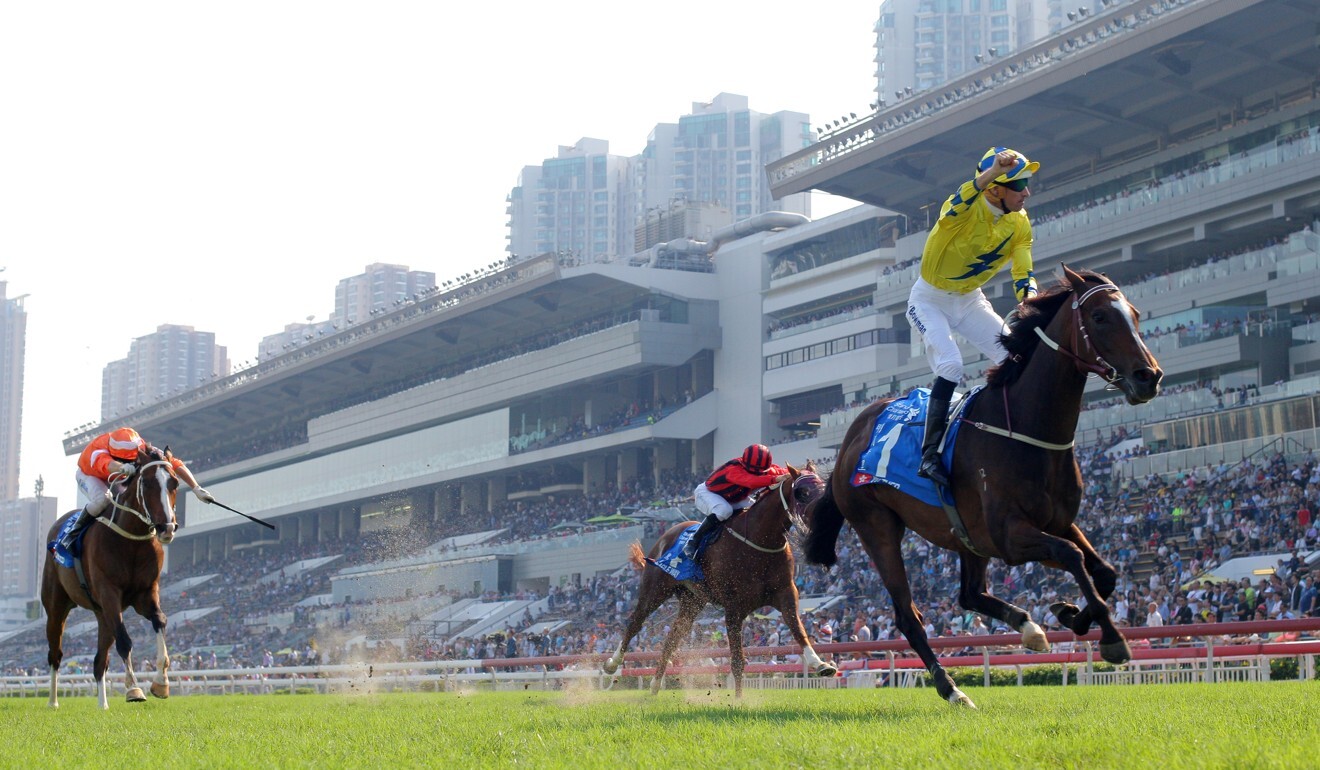 “So with that in mind, from my view if you were to ask me what the stable chances were, if the pace was genuine I’d have to say Savvy Nine and Helene Charisma.”

While he has only managed three wins in 42 starts in Hong Kong, Helene Charisma won a Group One as a three-year-old on a wet track in France over 2,400m.

Moore’s four-pronged attack in the Group One is part of a 13-strong team he is taking to the races on Sunday, with at least one runner in nine of the 11 contests.