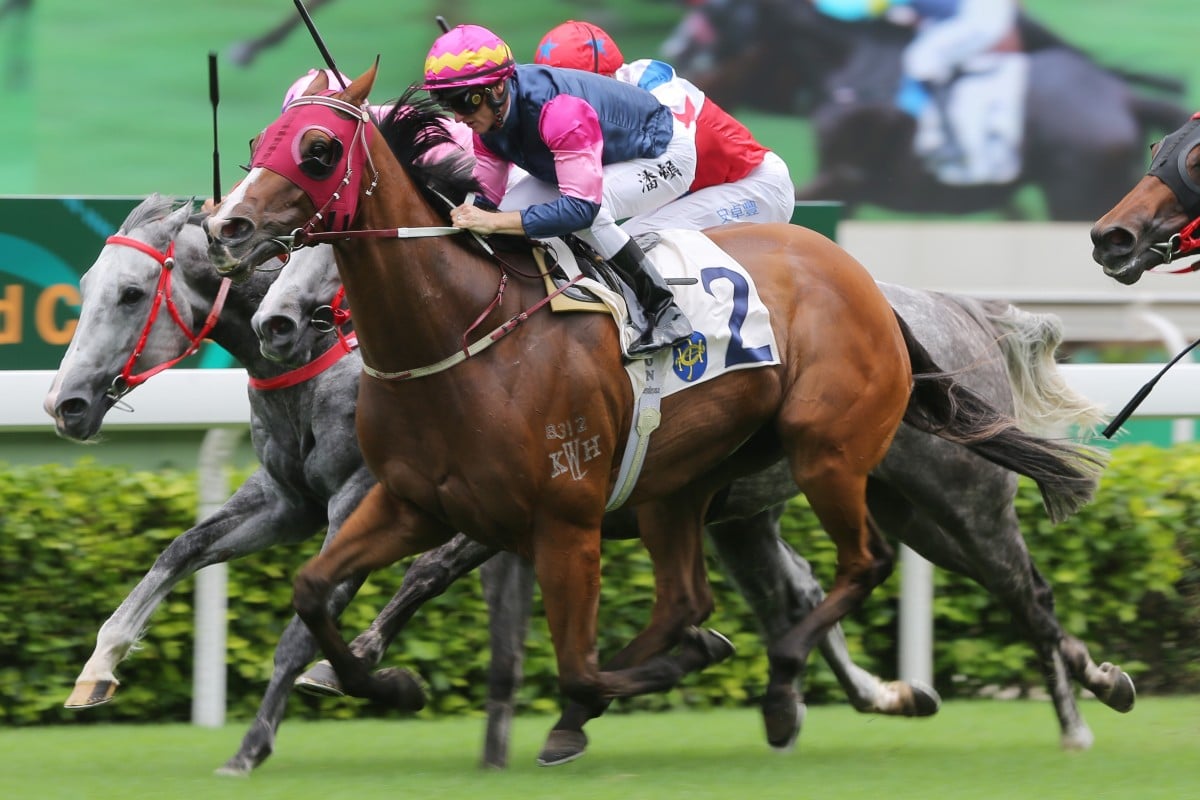 Thanks Forever takes out the Sha Tin Vase on Sunday. Photos: Kenneth Chan

Thanks Forever continued his ultra-consistent season with victory in the Group Three Sha Tin Vase (1,200m) on Sunday and John Moore believes Tony Cruz will be inheriting a Group One winner in waiting at season’s end.

Bloodstock agent George Moore confirmed post-race that Thanks Forever will be transferred to Cruz when his legendary father is forced into retirement, but John has set his sights on more success before farewelling the four-year-old.

“It was very deserved you would have to say from his past runs, he’s been very genuine without winning a black-type race,” John Moore said.

Thanks Forever wins a thrilling edition of the G3 Sha Tin Vase, securing an early treble for @zpurton! #HKracing pic.twitter.com/tJXjV9f38w

“It’s good to get that win up today and also to give the horse a bit of confidence getting to the line. I’m very happy with the result and let’s move on to the [Group Three Premier Cup (1,400m)] in June and see whether he can sustain that trip.”

Thanks Forever added his first Group success to four Group placings – including two at Group One level – this season and Moore is confident the horse will retain his place among the top handful of Hong Kong sprinters next term.

“As far as I’m concerned, with the sprinting ranks being on the light side, he’s definitely in a position to win a Group One next season,” Moore said.

Thanks Forever wins the GRP 3 Shatin Vase under a perfect ride by @zpurton . He was a nice yearling purchase from @KitchwinHills at the @mmsnippets. Heads to Tony Cruz for training next season and should develop further #moorebloodstock pic.twitter.com/qVOmFF5Ibz

Thanks Forever travelled fourth in the run under Zac Purton – a couple of lengths off leader Hot King Prawn – before wearing down the John Size-trained galloper and Big Party in the straight to snatch the lead in the final 50m and salute as the $2.30 favourite.

“Off not a really quick speed early on, I thought he hit the line really well and through the line he was starting to pull away,” Moore said.

Thanks Forever improved his record to five wins from 16 starts – including two wins and seven placings from 11 attempts this season. Moore is confident his galloper can now perform at 1,400m after finishing two lengths behind Beauty Generation at the trip in February’s Group One Queen’s Silver Jubilee Cup.

“I personally think if he gets a gate and he’s able to switch off in behind a little further back than today, he will get 1,400m,” the veteran trainer said.

Moore also saluted in the Pakistan Star Plate (1,200m) for Griffins, with Like That ringing up his second consecutive victory in the grade.

“He’ll have one more run this season in Class Three, he’s still a work in progress and I don’t think he beat much at all but he’s been getting better and better with racing,” Moore said of the two-year-old, who was also ridden by Purton.

Moore went within a length of snaring the last Group One he’ll compete in as a Hong Kong-based trainer, with Chefano running a gallant second to Exultant in the Champions & Chater Cup (2,400m).

He had to be content with a double on the day, however, which left him 10 adrift of Ricky Yiu Poon-fai in the trainers’ championship and continuing to dream of an eighth title as the perfect send-off.

“The Moores never give up,” he smiled.