Tony Cruz’s gutsy stayer has done enough to hold off young gun Golden Sixty, but the absence of international raiders has certainly helped his cause 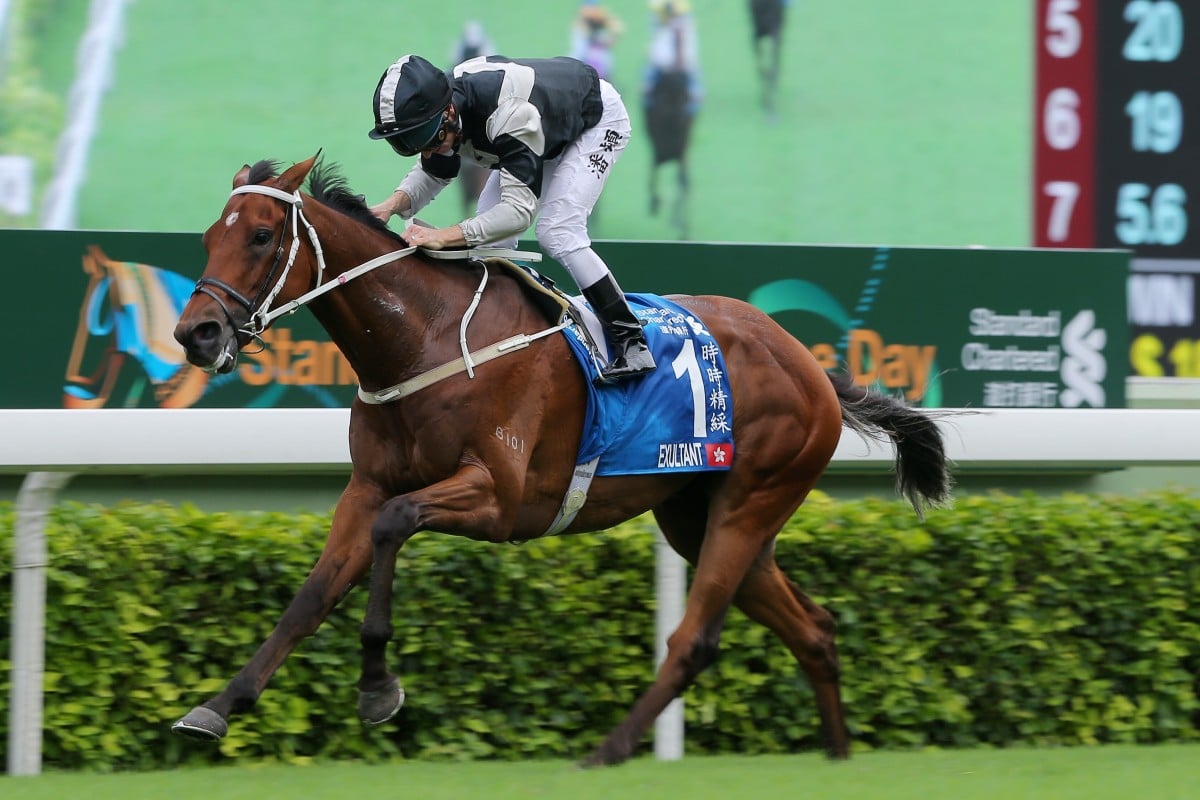 Exultant takes out the Champions & Chater Cup on May 24. Photo: Kenneth Chan

Who would you crown Hong Kong Horse of the Year? Exultant or Golden Sixty? – @_HBAMedia

No one was more surprised than Tony Cruz when Exultant got turned over by stablemate Time Warp as a $1.20 favourite in February’s Gold Cup and the ripples of that unthinkable result continue to be felt.

When Joao Moreira took Time Warp to the front and proceeded to set a tempo that Zac Purton declared was akin to “getting away with murder”, he not only pinched a Group One from his Australian rival but he also ensured this year’s Horse of the Year voting will not be as cut and dried as it could have been.

If the Cruz-trained Exultant wins that race, he finishes the season with three Group One victories – he went on the win the QE II Cup and the Champions & Chater Cup – and his first Horse of the Year gong.

Instead he finds himself in a genuine battle for the title with Derby hero Golden Sixty, who quickly became a fan favourite and has produced the most visually brilliant performances of the season.

Sprinter Beat The Clock and his two Group One successes also deserve to be in the conversation, however the fact he only raced four times for the season – and did nothing of note outside his top-level wins – puts paid to his chances, while Beauty Generation’s single Group One win won’t be enough to see him win a third straight title.

The only other galloper to sweep the four-year-old series was Rapper Dragon in 2016-17 and he was crowned Horse of the Year for his troubles, however he also won a Group Two and went into the Group One Champions Mile as the $1.40 favourite.

The star four-year-old tragically broke down in the race and died as a result of his injuries, adding a sentimental layer to his Horse of the Year case.

Golden Sixty, on the other hand, is yet to race at Group One level and his biggest win outside his Classic Series sweep came in a Group Three, however his undefeated season has left some convinced he deserves the award.

History is somewhat against Francis Lui Kin-wai’s electric galloper – Rapper Dragon was only the third Horse of the Year winner in over 40 years to salute without an open Group One victory.

On the other hand, the Derby is considered Hong Kong’s most prestigious race and the Jockey Club puts its four-year-old series on a pedestal when encouraging owners to splash out on top-line horses, which could impact the voting.

Also in Golden Sixty’s favour is that no galloper has been named Horse of the Year with just two Group One victories since Ambitious Dragon in 2011-12 (Werther did it in 2015-16 with just two big-race wins, but one was the Derby).

When push comes to shove none of that is likely to matter, however, with Exultant’s consistency at the very top level putting him in the box seat.

Two wins, a second and a third at Group One level, as well as Group Two and Group Three victories, mean the tireless stayer has earned the right to join a star-studded list of current and former champions.

He also won three Group One races last season, but we’ll never know if that has any impact on the thinking of the panel – which consists of Jockey Club chief executive Winfried Engelbrecht-Bresges, director of racing business and operations William Nader, chief handicapper Nigel Gray and a trio of racing journalists.

But while Exultant looks the winner, he can thank a certain global pandemic for helping him on his way – his third behind Japanese pair Glory Vase and Lucky Lilac in December’s Hong Kong Vase shows that while he’s Hong Kong’s best stayer, he’s not bulletproof when it comes to top-level international competition.

His two Group One wins against the locals cannot be taken away, but had Covid-19 not extinguished international participation in most of the season’s big races, his record would likely not be as easy on the eye.

In a perfect world, Exultant is rewarded for a swag of incredibly tough efforts in 2019-20, and in 12 months a Hong Kong racing scene that is crying out for its next out-and-out superstar has got its wish, and Golden Sixty is a lay down misere for next season’s title.