The city track gets hammered by a downpour of 87mm on Wednesday night, but luckily enough racing was at Sha Tin on Thursday for National Day 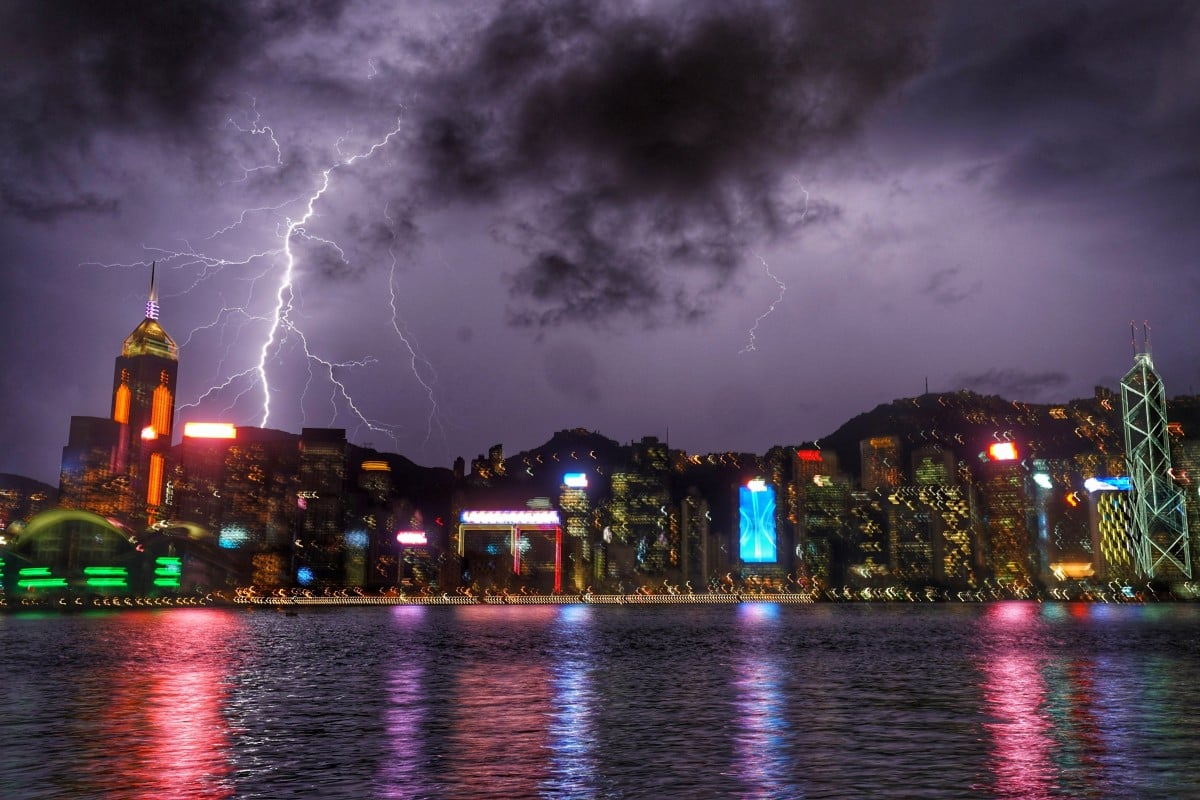 In life, timing is everything and the Jockey Club seems to be #blessed when it comes to weather.

The heavens opened above Happy Valley on Wednesday night – a black rainstorm (the heaviest type in Hong Kong with rain exceeding 70mm an hour) in action for an hour, with thunder and lightning rolling across the track for most of the evening.

The final tally: 87mm of rain at Happy Valley from 7.00pm until midnight with 3,245 “cloud to ground” lightning strikes in Hong Kong during the same period.

Probably for the best that there’s no racing at Happy Valley tonight. Absolute lightning storm. pic.twitter.com/UcCqBu5iRy

Of course, there was no racing at the iconic city circuit, with the typical midweek card replaced by the National Day meeting at Sha Tin on Thursday.

Instead, it was overcast with little rays of sunshine throughout the day – nothing that was going to interrupt proceedings and force the Jockey Club to find a new spot for the lost races, potentially with a replacement meeting.

“I think we would have got to the second race and we would have been aware the [Hong Kong] Observatory was going to issue the red rain signal and the black rain signal in quick succession. Red rain on its own gives us pause, when there is black rain, you cannot race,” Jockey Club chief steward Kim Kelly said.

“Irrespective of a black and a red rain [signal], when there is lightning that close, the horses don’t even go into the parade ring in those circumstances. It’s safety first and there is no compromise on that.

“The black rain [signal] ultimately stayed up an hour and [in the circumstances] we would have made the decision that it would have constituted an unreasonable delay to the remainder of the programme and we would have recommended the rest of the meeting to be postponed or cancelled.”

It continues a theme of luck for the Jockey Club this season on the weather front. When the Hong Kong election was postponed, the club moved its two Saturday dates on September 5 and 12 to the 6th and 13th, respectively.

The outcome? There was over 70mm of rain combined on those two Saturdays, and less than 6mm across the Sundays.

Over the past seven years, the Jockey Club has only cancelled one meeting because of weather – when Typhoon Mangkhut hit Hong Kong two years ago. It is an astounding stat given the extreme conditions that can strike the city, particularly in the volatile months between May and September.

Jockey Club chief executive Winfried Engelbrecht-Bresges often jokes that weather is one of the KPIs of director of racing business and operations Bill Nader.

Given the performance on that front across the first month of the season, he and the programme planners have already earned their bonuses. Despite the small fields, the stewards were kept busy with four jockeys copping bans on the 10-race card.

Championship-leading rider Joao Moreira was outed for two meetings after being found guilty of failing to ride Marvelous Fans out to the satisfaction of the stewards in the opening race.

Stewards found “he reduced the vigour with which he was riding the horse when riding it out hands and heels over the concluding stages”. He misses the meetings on October 7 and 11.

Chad Schofield pleaded guilty to careless riding on Mighty Power in the eighth race and will miss the cards on October 21 and 24, while also being hit with a HK$25,000 fine. 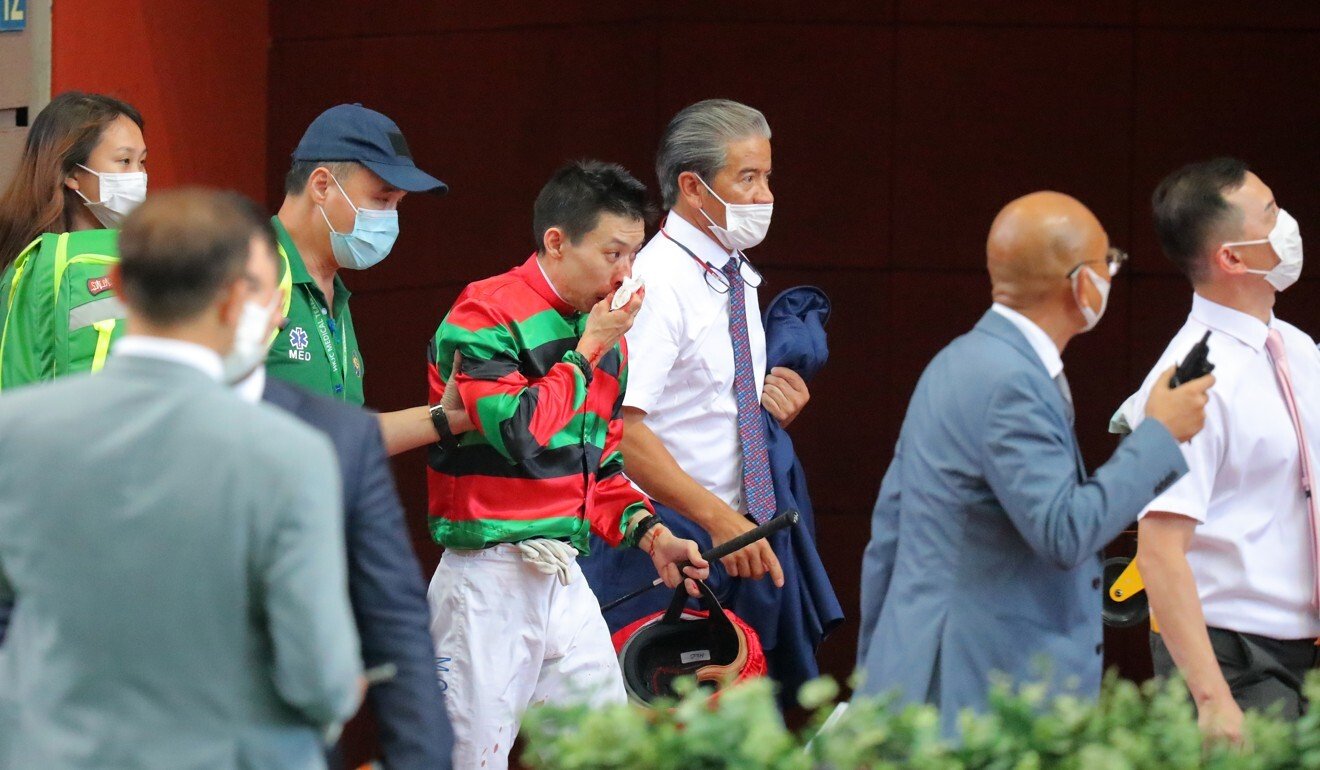 Vincent Ho Chak-yiu will also miss those race days after pleasing guilty to careless riding on World Famous. He was also fined HK$30,000.

In the last race, Antoine Hamlin was found guilty of careless riding aboard Ballistic King and will miss the meetings on October 28 and November 1.

It wasn’t the only drama in the 10th event, with Matthew Chadwick suffering a blood nose after Star Performance reared back in the parade ring.

Soon after, Vagner Borges was forced to press the eject button after King Opie was tearing straight into the outside rail on his way to the barriers. Borges walked away unhurt but the horse was scratched. Mongolian King was also ruled out behind the gates on veterinary advice, putting the cherry on top of an eventful race. 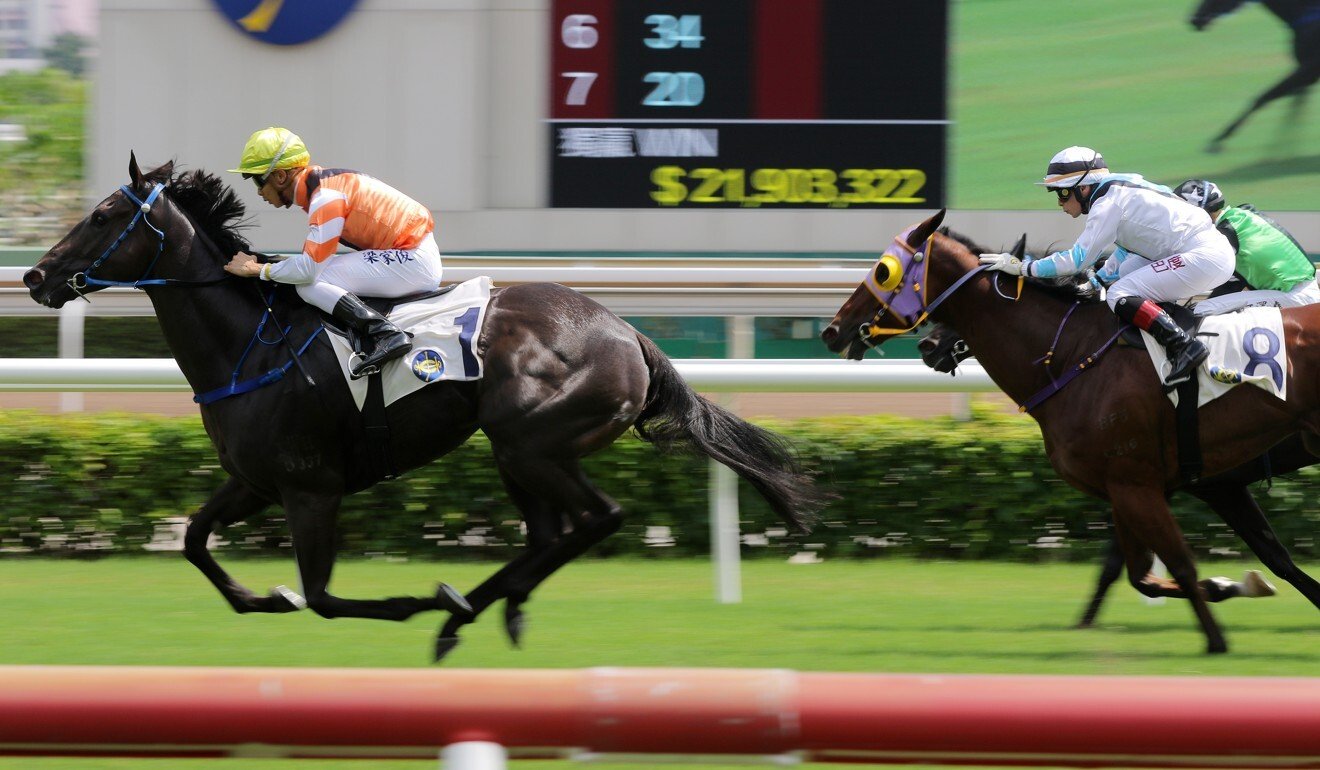 Ting’s Pegasus on the path to Glory

He looked one of the stand-out runners on the card and Jimmy Ting Koon-ho’s Pegasus Glory didn’t disappoint, taking out the opening race of the day.

The four-year-old caught the eye on debut with a narrow second to Prince Of Gems down the Sha Tin straight and he successfully made the step up to 1,200m in the Class Four Chengdu Handicap.

But Pegasus Glory made jockey Derek Leung Ka-chun work for the win, getting a bit lost in the straight before knuckling down in the closing stages to beat Gintoki and Whiskey Neat. 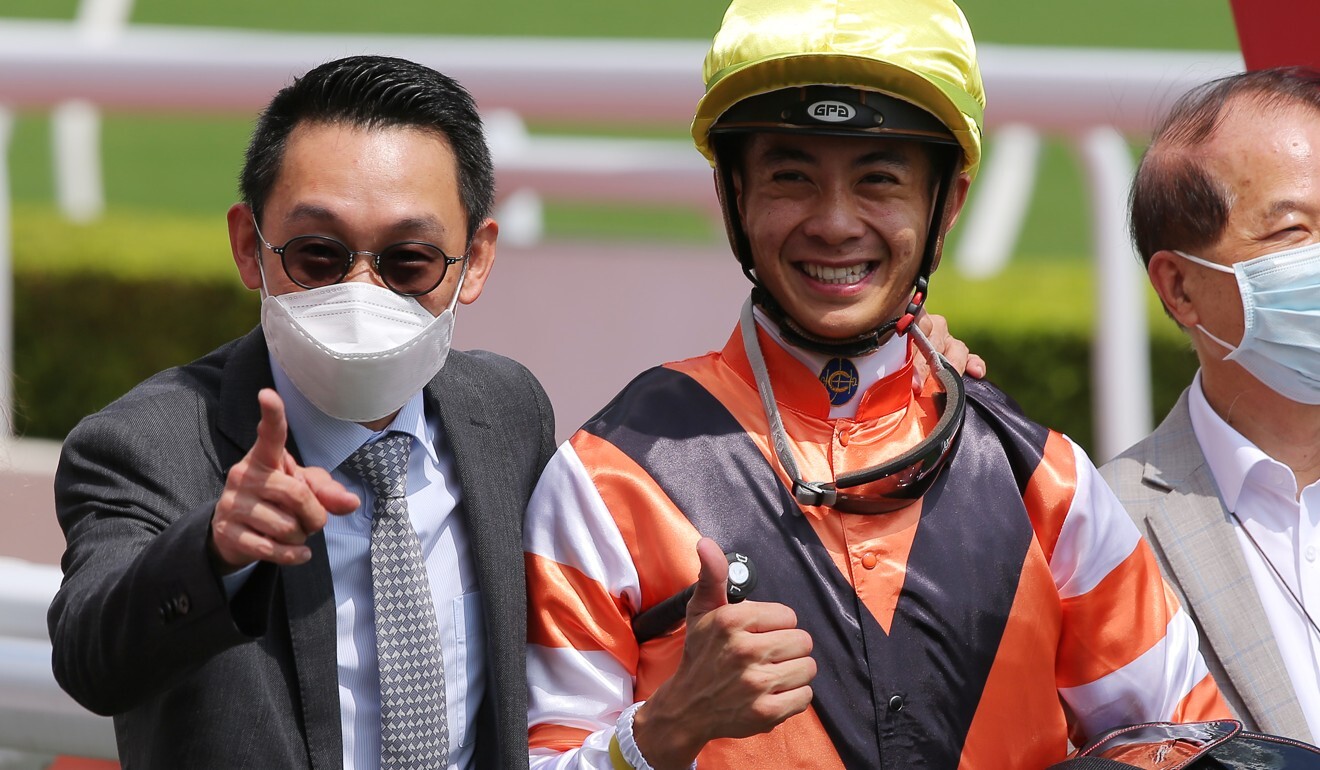 “I think he’s a nice horse, but his mind has not matured yet,” Ting said. “The jockey said he’s just thinking in the straight, he’s not concentrating. Only when other horses came up beside him did he know to go again.

“Before the race, I thought he would win easy, but he’s still not all there yet mentally.

“He just needs more experience, more time to learn. I will give him a little break now and hopefully he will come back better.”

It was the first of a double for Leung, who also tasted success with Dennis Yip Chor-hong’s Light My Day.

Patience pays off to Everyone’s Delight

It took more than 14 months to get Everyone’s Delight to the races after a litany of injuries, but the wait was worth it as Frankie Lor Fu-chuen’s youngster saluted on debut at Sha Tin on Thursday.

The son of El Roca first arrived in Hong Kong in July 2019, but suffered a hairline fracture in his shoulder virtually as soon as he started trackwork and then hurt his cannon bone the following April.

But Lor remained patient, bringing him along slowly at first at the Jockey Club’s training facility at Conghua, before ramping up preparations at Sha Tin. 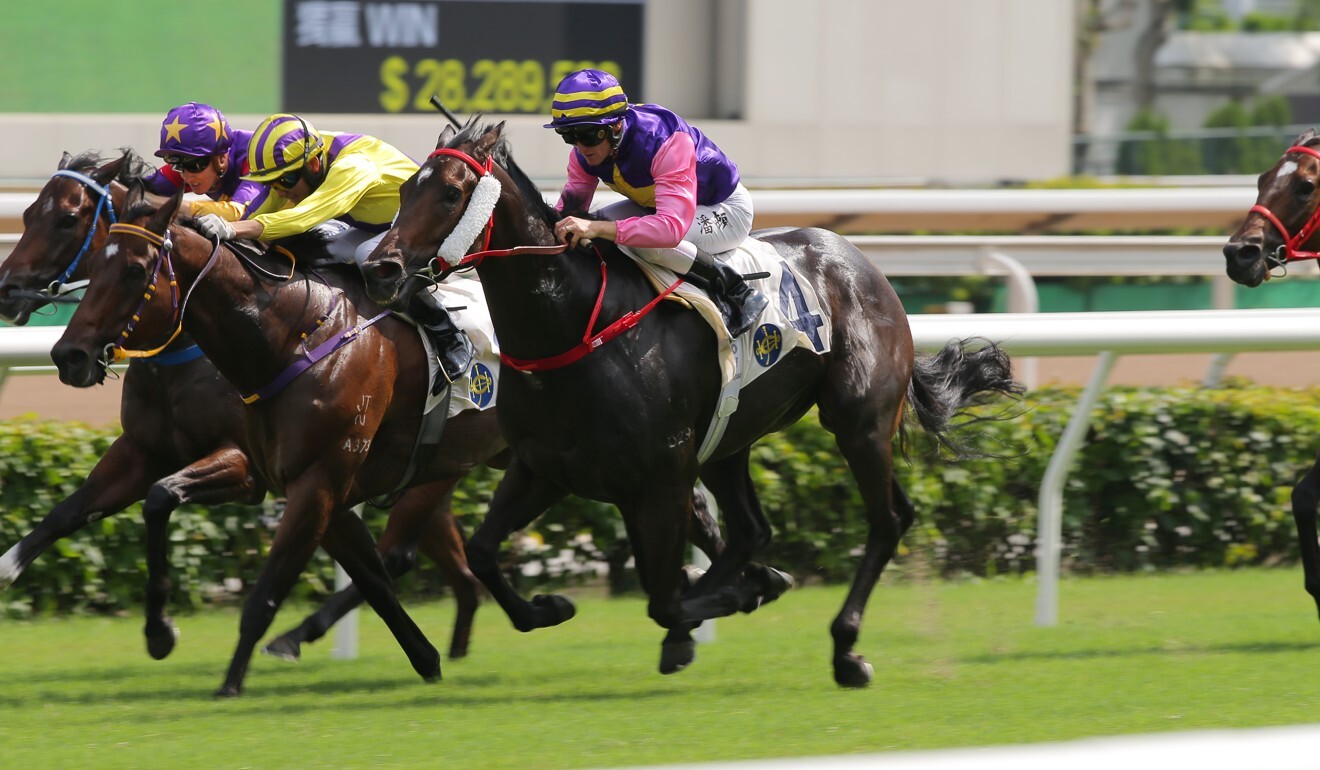 It paid off in the second section of the Class Four Chengdu Handicap (1,200m) with Everyone’s Delight hitting the line strongly under the guidance of Zac Purton to beat Hard Promise and Lucky Quality.

“I want to thank the owners for giving him time,” Lor said. “I came to the races really happy. He looks better. We trialled him four times and then we galloped him with cheek pieces and that was a big help to the horse.

Last year there was a lot of tension in Hong Kong surrounding National Day and the Jockey Club took a minimalist approach to formalities to avoid unwanted distractions/clashes.

A lot has changed since then with a pandemic largely muting the social unrest as restrictions have been imposed on what the population of the city can do for the past nine months.

On Thursday, a low-key attitude was implemented again when it came to the National Day ceremony at Sha Tin, with no politicians on course in any official capacity.

The March of the Volunteers was played at midday with only a few early birds on course – largely Jockey Club employees – and things passed by without incident. 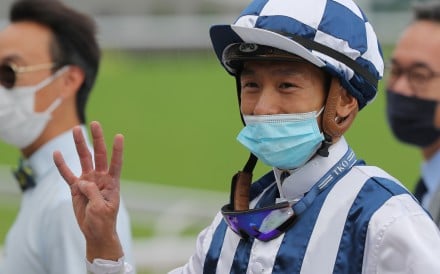 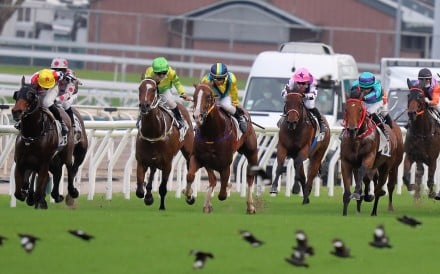 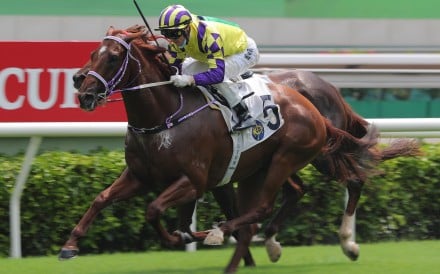