The 20-year-old shows his development as a rider by guiding Sumstreetsumwhere, Bullish Brother and Buddies to victory at Happy Valley on Wednesday night 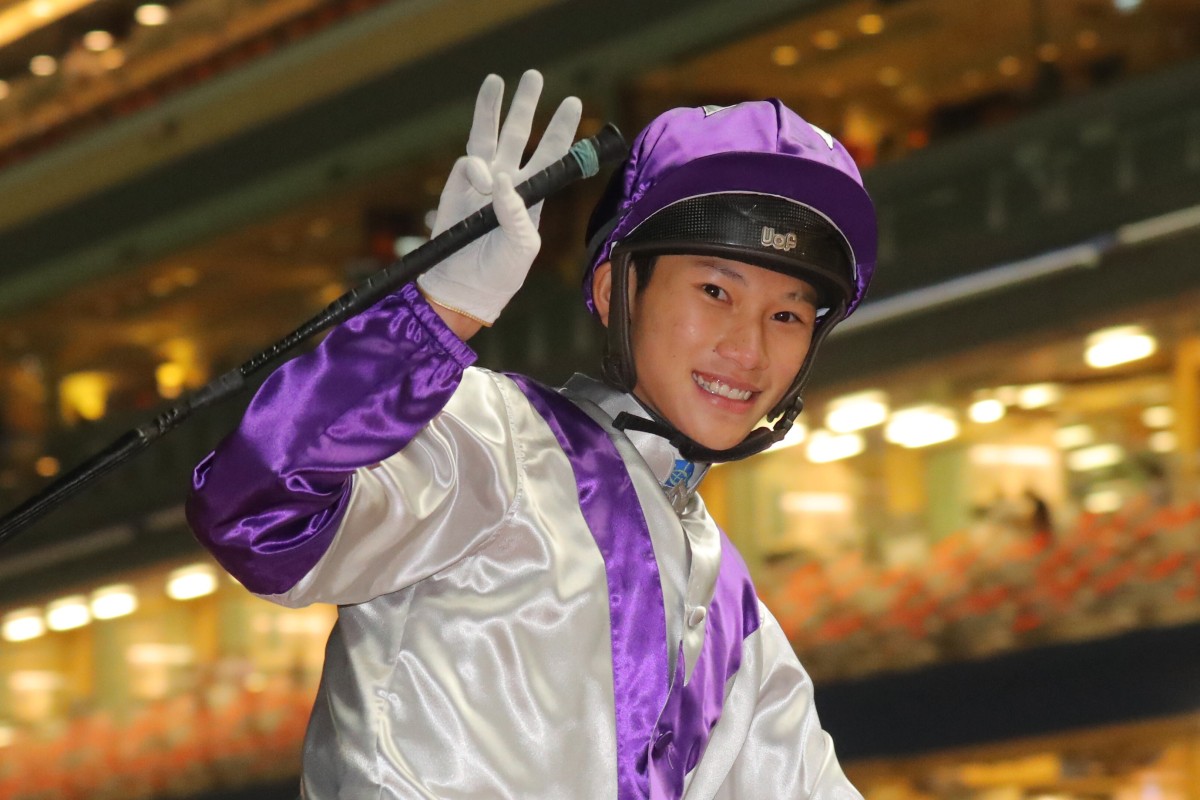 The hard work of apprentice Jerry Chau Chun-lok – and the team behind him – is starting to bear fruit with the talented youngster securing his first Hong Kong treble at Happy Valley on Wednesday night.

The 20-year-old guided David Hall’s Sumstreetsumwhere and the Tony Cruz-trained Bullish Brother home early on the card, before putting the cherry on top of a big night with the latter’s stablemate Buddies in the finale.

“It feels great, I’m very excited,” said Chau, who finished the night with three wins, a second and a third from his five rides. “I think I’m improving, but I’ve still got a long way to go, so I need to keep working hard.”

The 10-pound claimer now has 14 wins to his name, with just six more up his sleeve before his allowance is reduced to seven pounds.

Chau’s boss Douglas Whyte and his teachers at the Jockey Club’s Apprentice Jockeys’ School, Felix Coetzee and Amy Chan Lim-chee, have been putting in a lot of hours on his development and the results are beginning to come.

“There are a lot of people helping Jerry with everything – not only with his riding skill, with his whole attitude, his demeanour, the way he presents himself,” Whyte said.

“He’s got a lot of people behind him and I think that he’s showing everybody – including himself – that with the help and support, he can be a very competitive rider in Hong Kong. He’s doing a good job.

Sumstreetsumwhere grabs the third win of his career, this time under apprentice @JerryChau15 who gets his fifth win this season! #HKracing pic.twitter.com/OMDcpo7vUy

“He’s got lovely balance. He’s still got to fine-tune his start to the straight, his positioning and relaxing a horse and staying out of trouble. But he’s got a lovely style about him and the most important thing is that horses run for him.

“Now is the time for him to step up and keep improving because tonight’s a good night but he’s got his next meeting to get on with.”

Chau’s night was in stark contrast to the fortunes of the other two apprentices, with Victor Wong Chun and Alfred Chan Ka-hei continuing their winless starts to the season while also incurring two-meeting suspensions.

While none of Chau’s victories came for Whyte, the South African didn’t go home empty-handed, with Tashidelek (Alexis Badel) snaring his second win of the campaign in the Class Three Mount David Handicap (1,800m).

The six-year-old, who used to be trained by John Moore, seems to be relishing a change of scenery.

“He’s done a great job, I’ve only had him for two starts and he’s won both of them. He stepped into my yard and he hasn’t put a foot wrong. He’s a pleasure to train and he’s probably one of the favourite horses in the yard – not because he’s won, but because of his whole attitude,” Whyte said.

“It looked on paper that he had an awkward draw [10] but the more you studied the race, it was probably a good draw for him – he could take his time to come across. That’s exactly what happened, he didn’t have to rush him, he didn’t have to panic. It took him the best part of 700-800m to get a favourable position and get the horse comfortable and I think that was the winning move.”

Top trainer John Size opened his account at Happy Valley for the term when Wild West Wing led all the way in the Class Four Mount Gough Handicap (1,000m).

Championship-leading jockey Joao Moreira took luck out of the equation, charging forward from the outside gate to take up the running before giving a kick at the top of the straight.

It wasn’t such a good night for the Brazilian’s rival Zac Purton, who only managed two minor placings from his six rides, which included four favourites and two second elects.

Le Terroir landed the plunge of the meeting after storming home over the top of his rivals to claim the Class Three Lung Fu Shan Handicap (1,200m).

The off-season addition to the Francis Lui Kin-wai stable jumped a $4.20 second favourite and Matthew Poon Ming-fai ensured he got the chocolates with a determined ride.