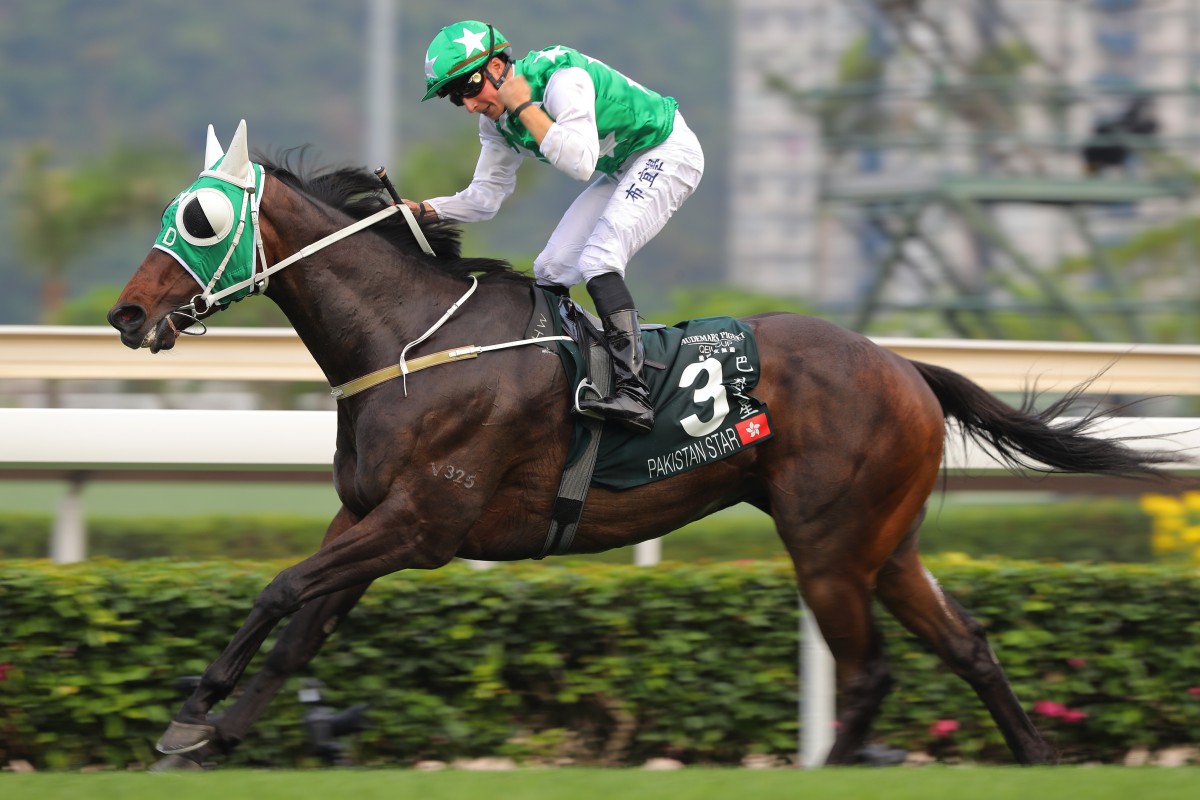 The dream of a perfect Dubai debut on the dirt didn’t come to fruition for former Hong Kong hero Pakistan Star.

The two-time Group One winner finished fourth in the Listed Entisar (2,000m) at Meydan overnight, his first start in his new home.

It was a new-look Pakistan Star, with his now famous green and white silks replaced by the colours of the Emirates Racing Authority – clearly his usual silks didn’t make it across in time – while he also competed without his trademark hood.

After jumping from gate six, jockey Pat Dobbs settled the seven-year-old midfield but opted to stay three-wide to minimise the kickback from the dirt.

Pakistan Star loomed up to the leaders and looked ready to challenge as they entered the straight, but he couldn’t match it with them when it mattered, eventually finishing about five and a half lengths from the winner Firnas.

Not to be for Pakistan Star on his UAE debut! Dubawi gelding Firnas denies Saltarin Dubai in a good battle, providing @SalemGhadayer with a Listed race double at @MeydanRacing pic.twitter.com/8cqvURMOfq

It wasn’t the start new trainer Doug Watson was hoping for, but given it was all very new – his first start in 12 months in a new jurisdiction, racing the opposite direction on a new surface – there is room for improvement.

“He was hanging to the right the whole way around – Pat couldn’t ride him too well,” Watson told the Dubai Racing Channel.

“I was a bit disappointed because he travelled into the straight pretty well and then just kind of flattened out. We’ll have a good scope of him and see if there are any excuses that way. Maybe it was the just dirt, I don’t know.

“I’m glad he finished off the race and we’ll probably get his gear back on – he’s got a hood and blinkers but he’d been training so well without it we thought we’d give him a shot, especially first time on the dirt, without it. But we might have to go back to that just to straighten him up a bit.”

Pakistan Star first hit the spotlight with a stunning last-to-first debut victory, which saw him become a social media sensation.

The combination of brilliance and unpredictability endeared him to fans as they followed his roller coaster career, which included wins in the QE II Cup and Champions & Chater Cup and a second in the Hong Kong Derby.

He also refused to race twice – a trick he also pulled in trials and on the training track – eventually being barred from competing in Hong Kong with owner Kerm Din opting to try his luck in Dubai.