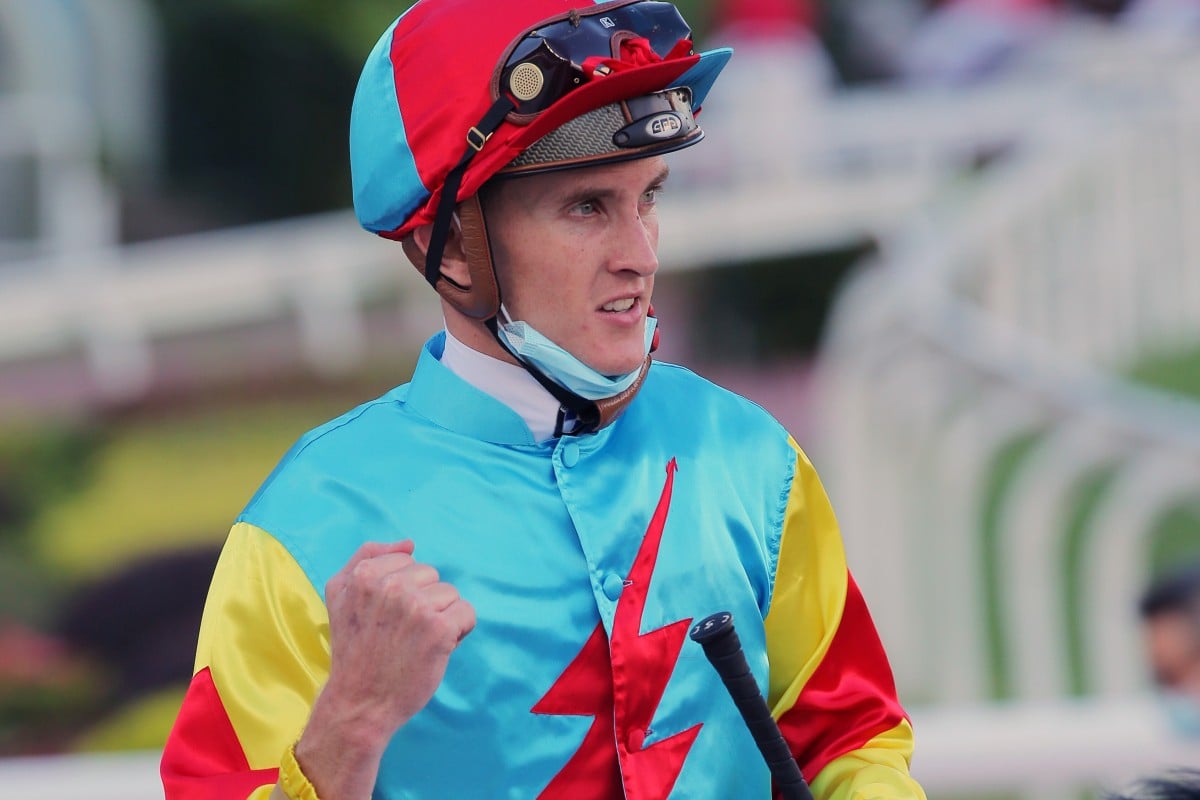 A Class Two victory aboard Fantastic Treasure would have been a fitting end for the departing Chad Schofield, but global pandemics aren’t overly conducive to perfect send-offs.

Instead the 27-year-old’s final ride before he departs Hong Kong will come aboard The Multiplier, a galloper who hasn’t finished better than 10th in his past four starts and would need a miracle to send the jockey out a winner.

But if Covid-19 has been good for anything it’s putting things into perspective and Schofield’s low-key departure is the least of his worries after he and his pregnant wife Hannah brought forward their move to Australia from December 18 to Sunday night.

“We’re just ready to move on and see the family, obviously Omicron could potentially make it difficult so we just thought we’d take the bull by the horns and get out,” Schofield said.

“Obviously I would have liked to have gone to the races at my last meeting with at least three horses with some sort of chance but we’ve just got to deal with what we’ve got. Just going to the races will give me a chance to say goodbye to everyone.”

Schofield was booked to jump aboard Fantastic Treasure – the horse he partnered to five-straight victories last season – one last time before the Omicron variant intervened.

“I was going to ride Fantastic Treasure on the 18th, that’s the only one I’ll miss. It’s the hardest part [about going early] really but we feel like we’ve made the right decision, so that’s the main thing,” said Schofield, who will also miss out on taking part in next weekend’s international showcase.

Illness has sidelined Schofield for the past three meetings and in all likelihood he’ll depart for Sydney with his last winner coming on October 10 aboard Manfred Man Ka-leung’s Little Bird and his Hong Kong total sitting at 208 winners from a touch over six seasons.

Schofield has indicated he’d be open to a return to Hong Kong one day – he spent four years in the city as child when his father Glyn was riding here – and there might be a time when he starts to ponder unfinished business.

A superstar apprentice, Schofield arrived in Hong Kong as a 20-year-old with a number of Group One wins already to his name – including the 2013 Cox Plate aboard Shamus Award – but is yet to win a Group One at Sha Tin, with his biggest success coming aboard Singapore Sling in the 2018 Classic Cup.

Again, it’s the least of the jockey’s concerns at the moment as he looks forward to seeing his family and welcoming a baby boy in February, but it’s not hard to envisage a time when Schofield’s mind shifts back towards Hong Kong.

A fantastic day for @SchofieldChad as Singapore Sling wins the Hong Kong Classic Cup giving him a treble on the day @HKJC_Racing pic.twitter.com/LE8TbbSGcn

Teetan to be tip top for HKIR

He’d be the next cab off the rank if the latest round of Covid-19 chaos prevented an overseas jockey jetting in for next Wednesday’s International Jockeys’ Championship (IJC) at Happy Valley but Karis Teetan has decided to put his body first to ensure he is in tip-top shape for his four Group One rides on December 12.

Teetan has carried a niggling shoulder problem since his nasty fall from Yoo Yoo King at Happy Valley in October and further examination of the injury revealed a small fracture.

The Mauritian was due to return from suspension at Sha Tin on Sunday but has opted to sit out of this weekend’s meeting and the IJC card on medical advice to give himself the best chance of being fully fit for international day and the rest of the season.

“I was told if I pushed on the injury might not heal properly and it might affect me for the whole season,” Teetan said. “For the sake of two more days out of the saddle, I was happy to take a long-term view.”