Keep You Warm comes home clear of his rivals to win at Happy Valley on his last start. Photo: Kenneth Chan

Francis Lui Kin-wai heads into Wednesday’s meeting at Happy Valley hoping to cement his place in the top four of the trainers’ championship.

Lui is currently behind only Frankie Lor Fu-chuen, John Size and Tony Cruz in this season’s standings with 52 winners but after drawing a blank at the past two meetings, he faces a renewed challenge for fourth from Ricky Yiu Poon-fai, who has been in fantastic form with winners at the past eight meetings.

Golden Sixty’s trainer has plenty of firepower at his disposal with just eight meetings left this term and one of Lui’s top-five horses is in action under the lights this week.

Keep You Warm is now up to a rating of 98 after being raised nine points for a fantastic two-length win over a strong field last time and is racing off a career-high mark as he verges on Group class.

Keep You Warm is off and gone! @zpurton takes a stacked finale for trainer Francis Lui. 🔥 #HKracing pic.twitter.com/xUJlAOHcLK

The five-year-old attempts to follow up that win in the Class Two Staunton Handicap (1,200m) and will need to give weight to some improving young rivals, but Lui is confident that his runner remains in good form.

“I think he’s still keeping his form,” Lui said. “Happy Valley suits him and I expect him to run well again.”

Keep You Warm faces a host of progressive three-year-olds and among them is Lucky Sweynesse, who won on his first attempt in Class Two company last time and has saluted in four of his five starts, and the Lor-trained Eason, who will attempt to bounce back from a disappointing run last time.

While Keep You Warm could be approaching his ceiling, one Lui runner at the Valley on Wednesday still has plenty of room to manoeuvre off a rating of 52.

Three-year-old Yellowfin has had just two starts in his career and after a disappointing debut on dirt when he was well found in the market, he showed definite ability when finishing runner-up to Gorgeous Vitality last time.

Lui is hoping Yellowfin can confirm that promise in the Class Four Hong Kong Young Industrialists Council 30th Anniversary Cup (1,000m) and would not be surprised if his youngster manages to come out on top.

“He’s a young horse and he keeps improving,” Lui said. “He’s still learning but he could be ready to win.”

The inconsistent High Rise Soldier is seeking his second win of the season for Lui in the Class Three Lyndhurst Handicap (1,200m) and is capable of running well from this mark.

No Japan for Golden Sixty: ‘I feel bad for the horse, he deserves more’

The six-year-old’s two Hong Kong wins have come off ratings of 68 and 65 and he is back down to a mark of 67 after being largely disappointing in four starts since his latest win in February.

Lui does not know quite what to expect from his runner but feels it would not be the biggest shock were he to run well.

“He’s not a young horse,” Lui said. “He’s a bit on and off and it all depends on the field. If the field is not strong he can win a race.”

Spicy Grill, Noble Steed and Run The Table round off Lui’s runners at the Valley. 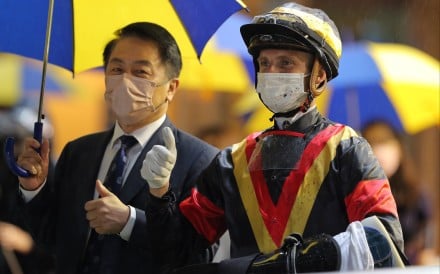