Forever Accurate went forward from gate 14 to shade Naught Baby for the lead one off the rail's at the 1,000m, cornered a half-length on top and fought off a challenge by Super Talent over the final 150m for a nice maiden win at his third start. Super Talent slotted deep with cover in midfield from a wide gate, rounded the final bend six deep and finished nicely to find one smarter on the day. Short-priced favourite Dashing Fellow enjoyed a good run one-out, one-back, shifted four deep soon after straightening and just got up 100m out to finish a distant third. Punted late, Timely Arrived peaked on his run 100m out after travelling keenly in the box-seat after jumping alertly in a pleasing debut. Glacier Blue kept on all right after a no-cover run near the speed to just miss a First-4 spot. Heco Rider settled third from the rear from a wide gate, and finished well to make it a blanket finish for fourth. However, he was reported to have bled. Lucky Follow Me made his run near the back and did make some ground late.

At declaration time, M Chadwick was declared as the rider of both NAUGHTY BABY and LUCKY PROFIT.

It was established that M Chadwick had a firm commitment to ride LUCKY PROFIT.

As such, the Stewards permitted Apprentice K C Ng to be substituted as the rider of NAUGHTY BABY.

For this declaration error, Trainer A S Cruz was fined $2,000.

LUCKY PROFIT was withdrawn on 14.11.14 by order of the Stewards acting on veterinary advice (lame right fore foot) and was replaced by Standby Declared Starter EASTERN PROMISE (N Callan).

Before being allowed to race again, LUCKY PROFIT will be subjected to an official veterinary examination.

FUJIAN SPIRIT, which proved reluctant to load, became fractious in the barriers and reared on a number of occasions.

Having regard to FUJIAN SPIRIT's previous record in respect of its barrier behaviour, the Stewards ruled that the horse must barrier trial satisfactorily before being permitted to race again.

FUJIAN SPIRIT was crowded for room at the start between DASHING FELLOW and GRASSLAND DRAGON which shifted out after beginning awkwardly.

SUPER SILKS was crowded for room on jumping between HECO RIDER and GLACIER BLUE which shifted out.

Near the 1000 Metres, SUPER SILKS shifted in and bumped EASTERN PROMISE.

Passing the 900 Metres, TIMELY ARRIVED was steadied away from the heels of NAUGHTY BABY (Apprentice K C Ng) which got its head on the side and shifted in.

Apprentice Ng was reprimanded and advised that whilst NAUGHTY BABY's racing manners were not assisting him in this incident, nonetheless he had failed to ride his mount in such a manner so as to ensure that the horse was able to cross TIMELY ARRIVED without causing interference.

Near the 650 Metres and again after the 600 Metres, TIMELY ARRIVED became unbalanced when reluctant to maintain its position behind NAUGHTY BABY and inside DASHING FELLOW.

At the 500 Metres, EASTERN PROMISE was awkwardly placed close to the heels of DASHING FELLOW.

At the entrance to the Straight, GLACIER BLUE and SUPER TALENT raced tight.

Near the 350 Metres, FUJIAN SPIRIT was shifted to the inside of LUCKY FOLLOW ME when disappointed for running between that horse and SUPER SILKS, both of which shifted ground.

Approaching the 200 Metres, LUCKY FOLLOW ME was shifted to the inside of GLACIER BLUE to continue improving.

At the 200 Metres, GLACIER BLUE and EASTERN PROMISE bumped.

Over the concluding stages, HECO RIDER lay in under pressure.

Throughout the race, GLACIER BLUE and INTELLECTUAL GLIDE travelled wide and without cover.

After the race, the Veterinary Officer reported that HECO RIDER had bled from both nostrils.

A veterinary inspection of SUPER SILKS immediately following the race did not show any significant findings. 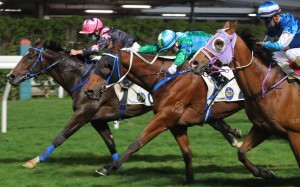