Lucky Day out-duelled Lotus Breeze after hitting the front approaching the 150m following a handy run for back-to-back first-up successes. He's usually quite honest over this trip. Lotus Breeze couldn't quite get there following a midfield run but did build on a pleasing opening day effort and might get away with a race soon. Happy Cheers finished well from the second half of the field in a pleasing debut performance. Favourite Regency Darling tired 150m out after enjoying an uncontested lead. He needed the run. Orionids made some ground following a midfield run. It was a better second-up run and he does appear to be on the right track. Look Eras faded following a prominent run without cover. Golden Deer spotted them a huge lead after rearing at the start. Speedster Chevalier Star was deemed a non-runner after a slow break.

Before being allowed to race again, NOBLE DE BOY will be subjected to an official veterinary examination.

As the start was effected, GOLDEN DEER became fractious and then began awkwardly, losing a considerable amount of ground.

Before being allowed to race again, GOLDEN DEER will be required to perform satisfactorily in a barrier trial.

Shortly after the start, ORIONIDS was crowded for room between LOTUS BREEZE and EASY TOUCH which was taken out by VARA PEARL.

From a wide barrier, HAPPY CHEERS was shifted across behind runners in the early stages.

Making the turn after the 800 Metres, ORIONIDS commenced to prove difficult to settle and was awkwardly placed close to the heels of TRAVEL SUCCESSOR.

Passing the 300 Metres, EASY TOUCH was momentarily awkwardly placed outside the heels of LOTUS BREEZE (T H So) which shifted out under pressure.

T H So was advised to exercise more care.

Throughout the race, LOOK ERAS travelled wide and without cover.

The Stewards considered an application lodged by Z Purton, the rider of CHEVALIER STAR to be declared a non-runner.

After taking evidence from Jockey Purton, Mr J Moore, the trainer of CHEVALIER STAR, and Mr A Speechley, the Starter and after viewing the official videos, it was established that after being placed in the barriers, a blindfold was applied to CHEVALIER STAR which is customary practice as that horse has a history of barrier issues.

The Stewards heard evidence that the blindfold was to be removed late in an attempt to prevent the horse from becoming fractious.

The Stewards found however that as the start was effected, the blindfold was still in the process of being removed from CHEVALIER STAR and was across the eyes of that horse at the relevant time.

Having regard to CHEVALIER STAR's normal racing pattern of racing up on speed, the Stewards ruled that CHEVALIER STAR had not been afforded a fair start and accordingly that horse was declared a non-runner.

A veterinary inspection of CHEVALIER STAR and GOLDEN DEER immediately following the race did not show any significant findings.

A veterinary inspection of LOOK ERAS immediately following the race did not show any significant findings, however, the horse was unable to be scoped due to being fractious. 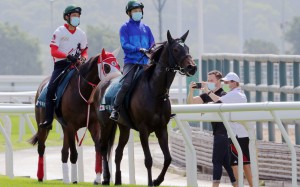 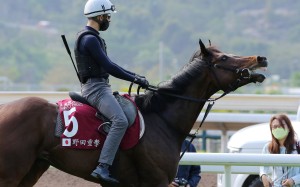 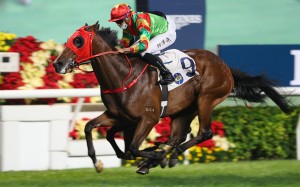 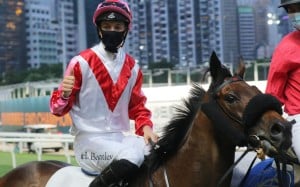 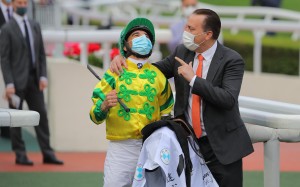 Moreira identifies the horse to end Fownes’ luckless run: ‘he’s the one’