Let the River run: the Hong Kong Derby winner who opened the gates to the world

By 1991, the classic was more than a century old, but that year a horse would emerge who would change the nature of Hong Kong racing forever 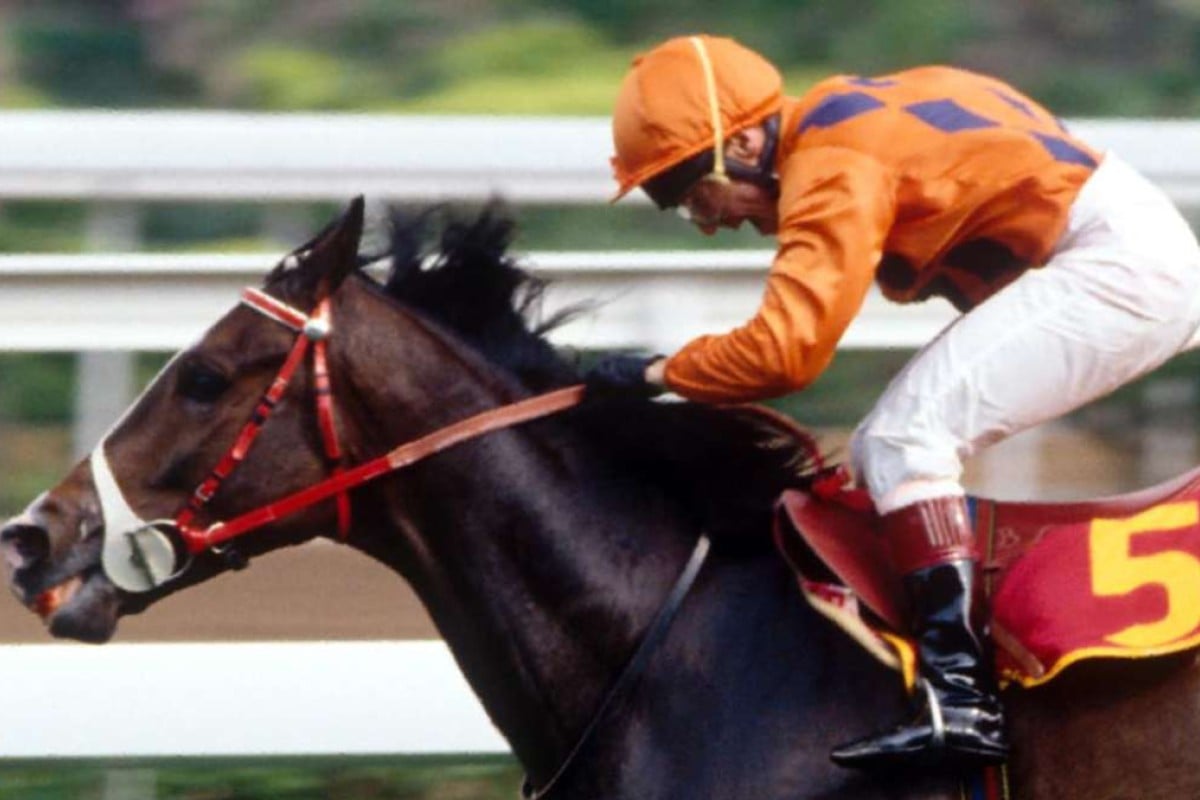 River Verdon was Hong Kong’s best galloper of the early 1990s, and became a trailblazer by becoming the first Hong Kong-trained horse to race outside the jurisdiction. Photo: SCMP Pictures

The main headlines in Hong Kong racing this week, those grand stories of the chase for classic glory and daring international raids, evoke all sorts of memories, recollections and anecdotes.

Wednesday’s unveiling of the BMW Hong Kong Derby field has focused attention on the race that all local owners want to win, more than any other, while the confirmation of Hong Kong’s team for the annual assault on the Dubai World Cup meeting has raised expectations that the jurisdiction can once again bat well above its average on the world stage.

The next 10 days will focus almost exclusively on the road to the Derby, but for now, we want to focus on just one Derby winner

The next 10 days will focus almost exclusively on the road to the Derby, but for now, we want to focus on just one Derby winner, better known not for his win in the four-year-old classic but for taking the first small steps onto the world stage at a crucial time for Hong Kong. His inglorious efforts abroad in the years preceding the 1997 handover have gained more significance over time and laid the foundations for what shapes as a stellar 24 hours in Dubai and Japan two weeks from now.

It all stretches back to River Verdon, the 1991 Derby victor who emerged as the best horse of his generation ­– so strong against homegrown opposition that he became the first Hong Kong horse to race abroad when he ran in the United States in 1992 and Australia in 1994.

These days, Ronald Arculli is more widely known as the owner of arguably the grandest globetrotter of them all, the late, great Red Cadeaux. But long before Red Cadeaux, before his unlucky Melbourne Cup tilts and his incredible global popularity, Arculli was the co-owner of trailblazing traveller River Verdon, along with another former chairman of what was then the Royal Hong Kong Jockey Club, Sir Oswald Cheung.

The David Hill-trained galloper, who debuted in September 1990, had won 10 of his 13 starts to the end of the 1991-92 season, including the Hong Kong Derby, the Hong Kong Invitation Cup – the precursor to today’s Hong Kong Cup – the Gold Cup and the Champions & Chater Cup. While the trainer admitted he had “only been beating Group Three horses at home”, he felt the prize money on offer abroad was well worth a gamble and his sights were set on the Arlington Million in Chicago.

Hopes were high, a travelling bandwagon of fans turned up at Arlington Park and they crunched his price into 8-1. He finished a tailed-off 11th of 12, a long, long way behind French galloper Dear Doctor.

International plans were shelved, and while he wasn’t quite the same galloper he was before his trip, he still dominated the local ranks. But after becoming the first horse to win the Hong Kong Triple Crown of the Stewards’ Cup (1,600m), Hong Kong Gold Cup (2,000m) and Champions & Chater Cup (then 2,200m, now 2,400m) in 1994 ­– a feat that hasn’t been replicated since – Hill decided to travel him once again, this time targeting the Melbourne Cup in Australia. It was a race that had been opened to international competition a year before in the most stirring fashion, with Irish galloper Vintage Crop recording a famous victory for Dermot Weld.

The push was so strong, the Jockey Club created a 2,300m race in September 1994, just so River Verdon could pass Melbourne Cup qualifying conditions. He won at 1-20.

Again, hopes were high and his entourage of loyal followers made the trek down under, only for the son of Be My Native to finish a disappointing 11th to Solvit in the Cox Plate before beating only four runners home when finishing 25 lengths from Jeune in the Melbourne Cup.

They were far from performances to suggest Hong Kong horses could match it with the big guns on the world stage, but his legacy has increased appreciably in the years since his retirement ­– and the statistics on Hong Kong horses abroad make for startling reading.

Since River Verdon’s trailblazing effort in 1992, 144 other Sha Tin-trained horses have run in 271 races abroad, right up to Gun Pit and Rich Tapestry placing on Super Saturday at Meydan.

Including River Verdon’s three unplaced efforts, the record of Hong Kong horses overseas stands at 274 runs for 30 wins, 29 seconds, 34 thirds and 24 fourths. These include wins in Australia (1), Great Britain (2), Japan (5), Macau (5), Singapore (9), the United Arab Emirates (7) and the United States (1), while Hong Kong has also been represented in New Zealand.

Cape Of Good Hope left Hong Kong out of necessity more than anything, chasing wins away from the seemingly unbeatable Silent Witness. And while his record stood at only two wins abroad from a remarkable 12 runs, he was still a winner of the Golden Jubilee Stakes when Royal Ascot was transferred to York in 2005, while he also beat the best Australian speedsters during the 2005 Melbourne autumn. As for Lucky Nine, who travelled 11 times, it was his two wins in the now-defunct KrisFlyer Sprint in the twilight of his career that will long live in the memory of many fans outside Hong Kong.

With his retirement, it is Rich Tapestry carrying the torch, becoming the first Hong Kong horse to race in America since River Verdon and adding a feature win ­– on dirt, no less – to boot. If he lines up in this year’s Golden Shaheen, it will be his 10th career effort overseas, quite remarkable for a veteran with known issues.

This would have seemed unfathomable only a generation ago, when River Verdon was beaten out of sight and Hong Kong was nothing but a racing backwater

At this stage, Michael Chang Chun-wai’s dirt star is expected to be one of a record-equalling eight Hong Kong runners on Dubai World Cup night, while top sprinter Aerovelocity will chase a second Takamatsumoniya Kinen in Japan only hours later. It is well within the realms of possibility that within 12 hours, Hong Kong could win three of the world’s biggest sprints on opposite sides of the world.

This would have seemed unfathomable only a generation ago, when River Verdon was beaten out of sight and Hong Kong was nothing but a racing backwater, despite the passion of local fans.

If you have a spare moment and you just happen to be passing Happy Valley racecourse, take a minute and pop in to the Hong Kong Racing Museum. The exhibit of honour stands towards the end of the tour, parked away in a corner but unmissable in an otherwise bland room. It is a woolly River Verdon, captured as he was when he died in 2005 at the age of 18, his stuffed hide forever looking out on the urban track. 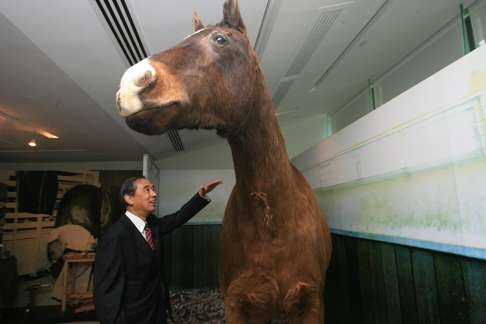 He may not be what the embalmed body of Phar Lap may be to Melbourne, but his place in Hong Kong racing history is secure, his legacy the success of our horses on the world stage today.

And who knows? Perhaps in 2017, a quarter of a century on from River Verdon’s historic tilt, this year’s Derby winner will find himself abroad, racing in some of the world’s premier races and demonstrating once more how far Hong Kong racing has come in 25 years. 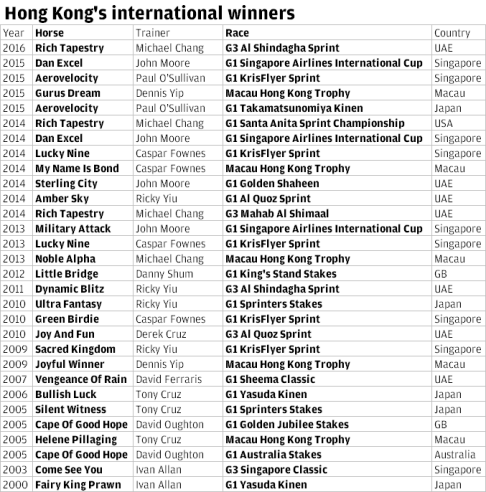