Tony Cruz-trained Peniaphobia emerges with the most credit after a brave third in the Al Quoz Sprint, but four others in Golden Shaheen fall short of expectations with Muarrab just beating American X Y Jet on the line The dreams dissolved into a double desert disappointment as Hong Kong’s sprinters failed not just to win the two Group One sprints at Dubai’s glittering World Cup night, but largely fell short of being competitive.

Tony Cruz-trained Peniaphobia was the one of Hong Kong’s six speedsters to emerge with the most credit, after a brave third in the Al Quoz Sprint over the straight 1,000m behind Australia warhorse Buffering, while dirt sprinter Super Jockey probably did better than he should have done with fifth carrying a serious hoof injury in the Golden Shaheen.

I am happy – he ran his heart out, but he was beaten by two better horses on the night
Tony Cruz

“At the start as he jumped he cut his whole bulb off,” said trainer Tony Millard, looking down at the blood pouring from the left front hoof of Super Jockey in the hosing down stalls.

READ MORE: Check out our live blog on the night

“He took his whole heel off. It was certainly a good performance. He didn’t show his normal speed and there is a serious reason. Under the circumstances, not a bad run at all seeing he pulled up lame.”

Not Listenin’tome was never a factor racing closer to the inside of the track and trainer John Moore said jockey Ryan Moore told him the low draw had been a major contributor to his disappointing eighth. 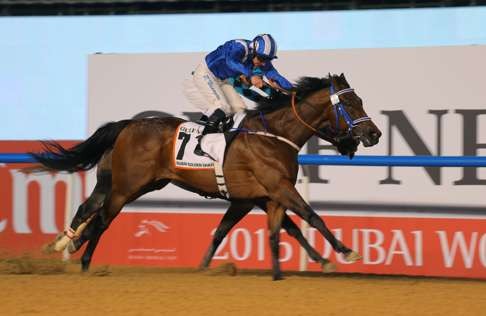 “The action was going on out wider on the track where Buffering and the place-getters were and Ryan said he could never get out there and into it,” said the trainer.

In the Golden Shaheen on the dirt, Super Jockey had excuses as the best of Hong Kong’s four runners, but Rich Tapestry (seventh), Domineer (eighth) and Master Kochanwong (ninth) were the last three to complete the course.

David Hall said Master Kochanwong did not cope with the heavy kickback and Caspar Fownes echoed that with Domineer’s poor run.

He took his whole heel off. It was certainly a good performance. He didn’t show his normal speed and there is a serious reason
Tony Millard on Super Jockey

“It’s a shame because it’s not a true indication of the horse’s quality – there’s only a certain amount of sand a horse can eat before it stops him,” Hall said.

Michael Chang Chun-wai said Rich Tapestry tried valiantly to match the speed for most of the race, but faded quickly late in the race and is now showing his age.

“I think he’s telling us that he’s done. We have one more race for him in Korea and then it’s time to retire him,” Chang said. 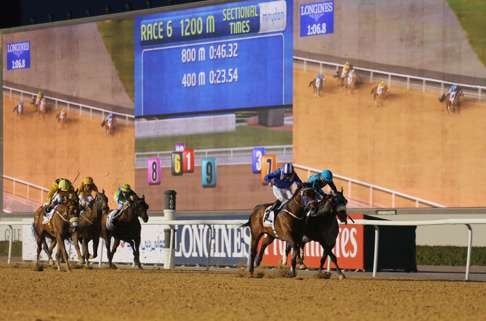 The last time Peniaphobia had met Buffering was in the Hong Kong Sprint of 2014 when the latter ran one of the worst races of his career after a foot abscess during the week leading up and Peniaphobia ran second.

This time, the race was on in earnest between the two soon after the jump, with Buffering surging to the lead and Joao Moreira on Peniaphobia making his intentions clear straight away.

He pushed the five-year-old out of the gates and right, towards the Australian gelding and made a race of it from the beginning and in the end it came down to Buffering’s renowned toughness as he edged away and Peniaphobia was cut out of second by local runner Ertijaal. 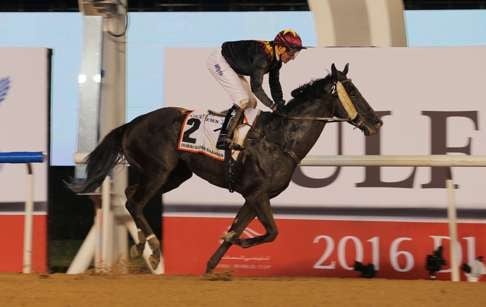 “I am happy – he ran his heart out, but he was beaten by two better horses on the night,” said Cruz. “Everything went right, he was there, but they were too good. That time tonight was faster than last year when he was just beaten, he’s only been beaten a length and I’m not convinced the straight is his best course.

“He’ll come back to Hong Kong for the 1,200m around a turn and he will be tough to beat on home soil.”

And he will meet Buffering again next time as trainer Robert Heathcote confirmed that the winner will line up now in the Chairman’s Sprint Prize on May 1.

“No stone bruises or abscesses this time and you’ll see the real Buffering – he’s just too tough for those younger horses,” said a jubilant Heathcote. “He was going to just come to Dubai and then Hong Kong, but after this I think we’ll go on to Royal Ascot, too.” 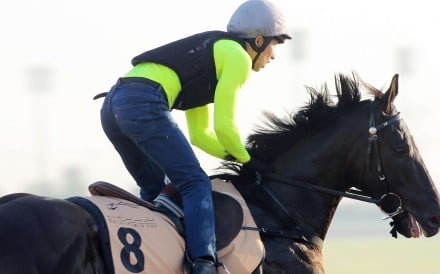