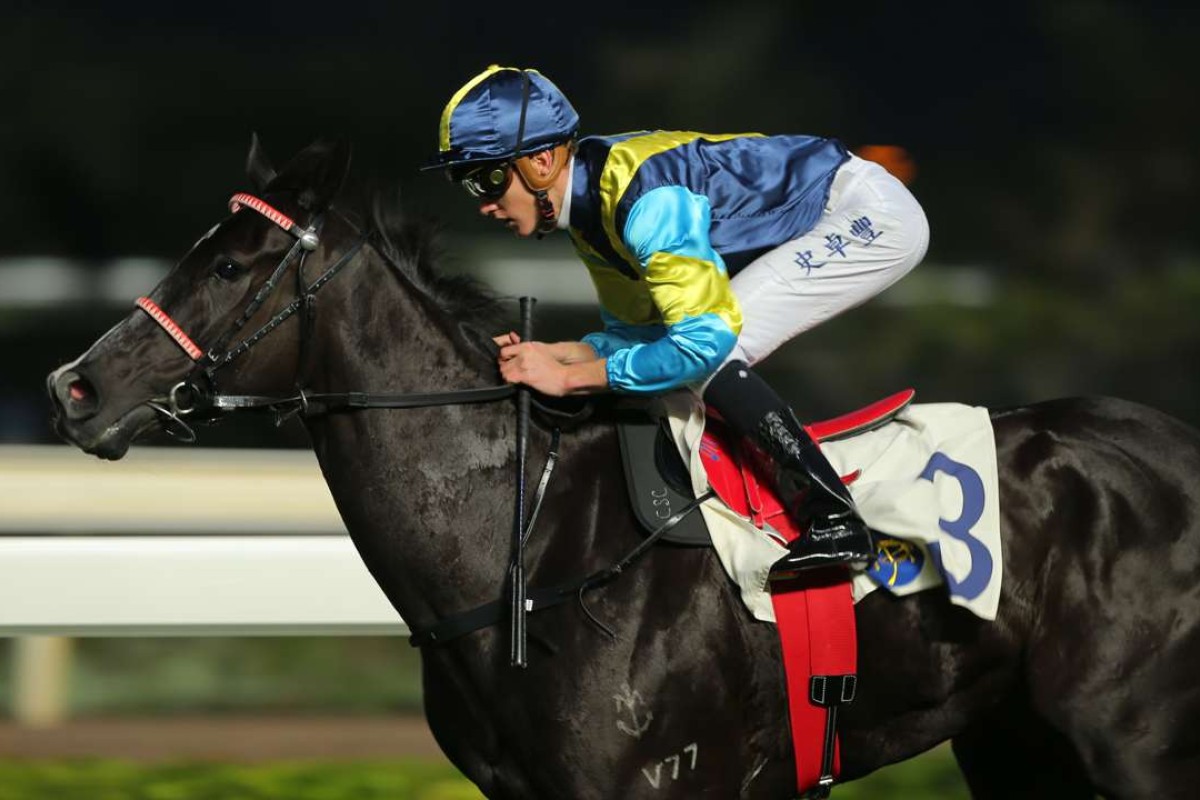 Jolly Banner makes it three straight at Sha Tin on November 27 and returns on Saturday with Chad Schofield aboard and the top weight in Class Two. Photos: Kenneth Chan

Two trainers have done the right thing by their horses – and by jockey Chad Schofield – by giving some early season stars a short break before assignments at Sha Tin on Saturday.

Schofield returned last Sunday after missing much of December through suspension, but hasn’t missed a ride on Jolly Banner or World Record, with both horses out to extend winning streaks.

A long suspension like Schofield’s eight-meeting ban often means missing out on winners, but Jolly Banner’s trainer Ricky Yiu Poon-fai and World Record’s handler Tony Millard both elected for breaks between races for their in-form runners.

Of course, the successive wins mean the two horses are getting ever-closer to their ratings peak, but the short layoffs should have the pair at their best and provide the added bonus of allowing Schofield to continue his association with them. 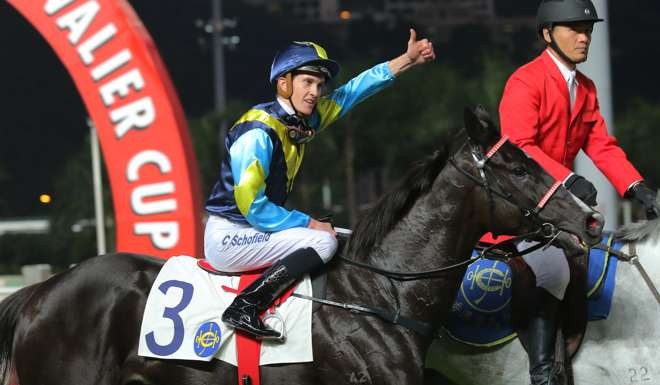 The highlight of Saturday’s 10-race meeting is undoubtedly Jolly Banner’s clash with My Darling in the Class Two Beas River Handicap (1,400m).

Jolly Banner has already lowered the boom on My Darling (Brett Prebble) twice this season and will be out to do it again with top weight.

The small but perfectly built son of Lonhro will be shooting for four straight after a six-week break between races.

Jolly Banner trialled nicely alongside Able Friend on the turf last week and seems the type that enjoys being on the fresh side.

My Darling’s last start win means the pair don’t match-up all that differently at the weights than the last time they clashed, Jolly Banner meeting him just two pounds worse off.

Barrier 11 is a concern, but Jolly Banner left his beaten rivals with no excuses when he crossed to sit outside the lead from gate 14 last start and that tactical speed gives Schofield options here. 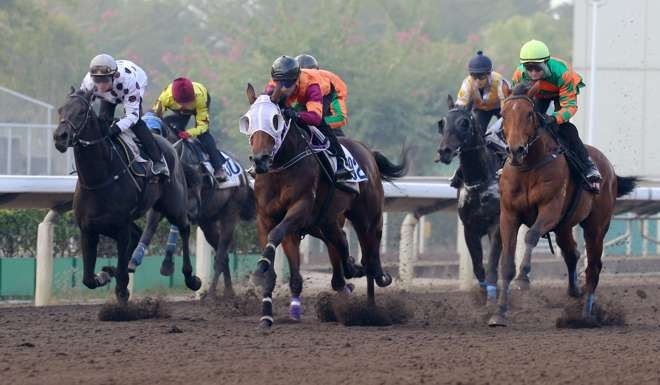 Similarly, Millard kept his word and backed off with World Record after back-to-back Class Four victories and the break between runs should help the four-year-old win three straight in the grade.

Meetings on the “C+3” can tend to scare off the truly progressive Private Purchase Griffins and World Record, who should have at least one more win in him, strikes a field of below-average quality in the Tsung Pak Long Handicap (1,400m).

One decent prospect coming out of what looks a strong form race is John Size’s Beat The Clock (Moreira), who tackles the Class Three Yin Kong Handicap.

Beat The Clock was a close third behind exciting prospects Seasons Bloom and Regency Bo Bo less than two weeks ago at Sha Tin and this looks easier. 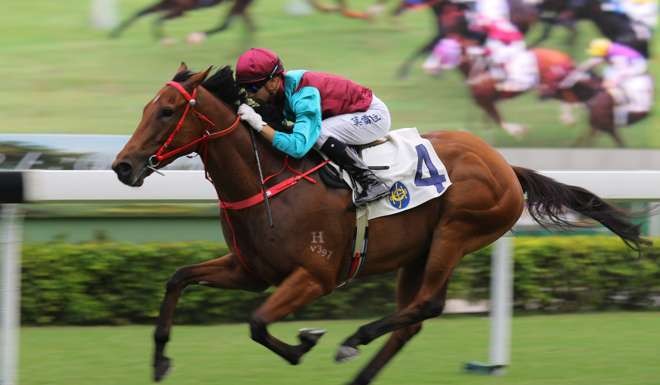 Seasons Bloom, a year older than three-year-old Beat The Clock, will line up against the best of his age group in the Group One Hong Kong Classic Mile on January 22.

Although Beat The Clock was getting nine pounds off Seasons Bloom, a bold third, finishing just one length behind, was full of merit and now Size’s horse draws a gate for the first time in his short career.

Beat The Clock has jumped from gates 14, 14, 12 and 11 in his four starts so far but hasn’t missed a place, finishing second to two other Classic Mile entrants along the way in People’s Knight and Winner’s Way.

The Hinchinbrook gelding returns to the same 1,400m course but has come up with barrier two this time around. 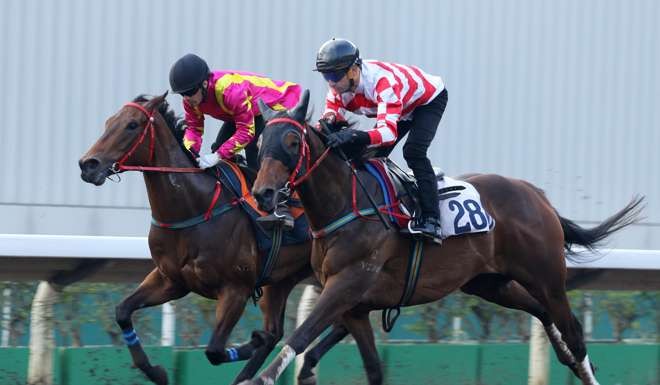 Another Size-Moreira runner to draw a better barrier is Dr Listening, who returns from a break with stall one after the patient trainer pressed reset on the four-year-old’s preparation.

Dr Listening went back-to-back late last season with some even suggesting the son of Star Witness would be stretched to the four-year-old series and even the Group One Hong Kong Derby.

If those were the plans, they were scuttled when Dr Listening finished unplaced and pulled up lame as 1.7 favourite on October 1.

A couple of trials since – the last one against a decent measuring stick in Wednesday’s night’s winner California Joy – have Dr Listening ready for a return over 1,200m in the Long Valley Handicap. 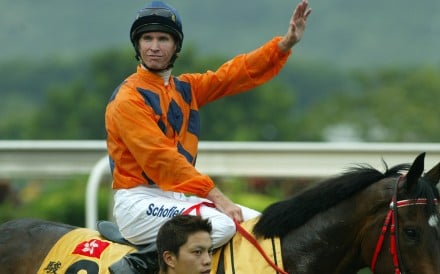 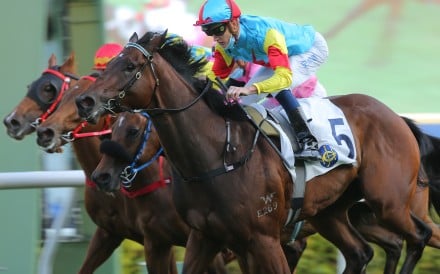 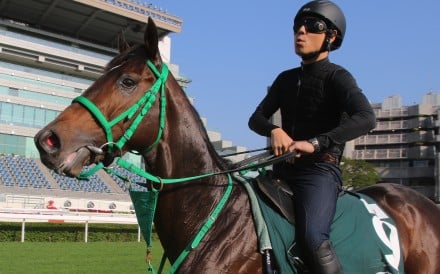 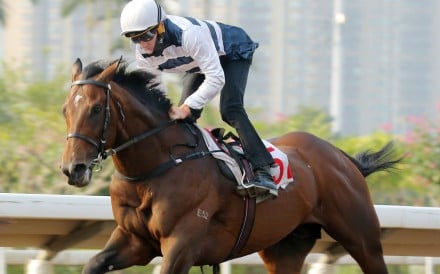