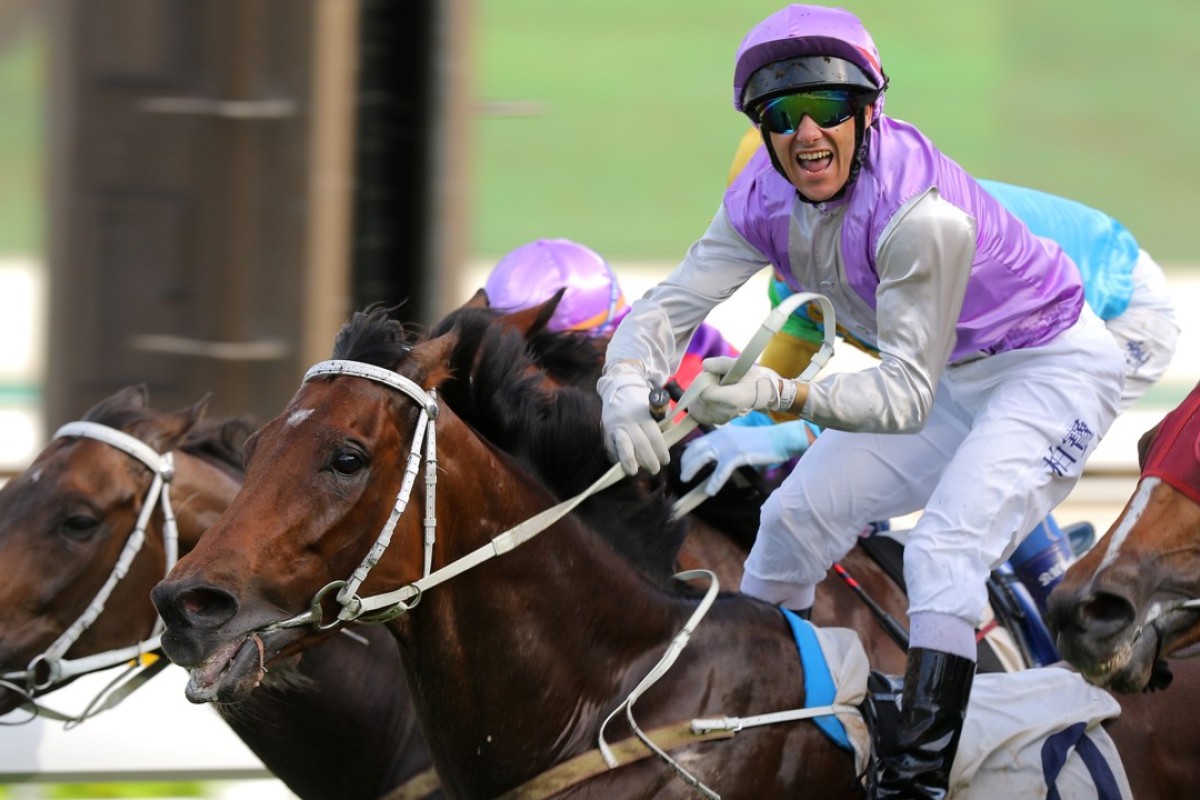 Brett Prebble looks ready to jump out of the saddle as General Sherman wins at Sha Tin. Photos: Kenneth Chan

Brett Prebble loves a celebration any time he wins a race but got an extra buzz out of throwing General Sherman across the line in a heart-stopping finish at Sha Tin to win his first race for Tony Cruz in over four years.

When things were nip and tuck in the final 200 metres of the Pok Fu Lam Country Park Handicap, Prebble threw every thing at General Sherman to thread a tight gap between Rocketeer (Douglas Whyte) and Helene Charisma (Zac Purton) and land the prize, then hooted, hollered and pointed at the crowd with delight.

“I was definitely pumped. It was a very competitive finish,” Prebble said. “We had some great tussles over the years, me and Douglas, and with Ollie Doleuze, my good friend – we’d fight close finishes out all the time but you don’t seem to get those finishes as often any more. I don’t anyway.

“When it happens it’s great competition, great sportsmanship and a real buzz. That feeling is why we ride.”

General Sherman & @blprebble prevail in a three-way photo finish over Rocketeer and Helene Charisma in R9, a Class 2 over 2000m #HKRacing pic.twitter.com/7jDxoP7A2x

With 32 wins, this will be one of the quietest of Prebble’s 13 seasons and, while part of that was taking a month off in May-June for personal reasons, he said finding some fast horses had not got any easier.

“Nice to ride some finishing closer to the front than the back. I got a text from a friend, Justin Bahen, after the races and he said I seemed to enjoy the win and I said I was enjoying it again, like when I was a kid,” he said.

“You lose that feeling sometimes, it can get disheartening when you’re riding slow ones and getting kicked in the face but that’s Hong Kong – no one ever said it was easy. So it’s rewarding to fight out a race like that and knock off some of the other big boys.”

It was a reflowering of a relationship with trainer Tony Cruz too, as Prebble had not won a race for the yard since Mega Champion in November, 2012. “I used to ride quite a bit for Tony at one stage. I’d get Felix Coetzee’s seconds but there some really good horses amongst them,” Prebble said.

“We won the Yasuda Kinen together with Bullish Luck of course and I reckon one of the best I’ve ever ridden was trained by Tony, a horse called Helene Brilliant, who was only a baby when he won a Class Two in his first start here and we never got to see the best of him due to injury issues.”