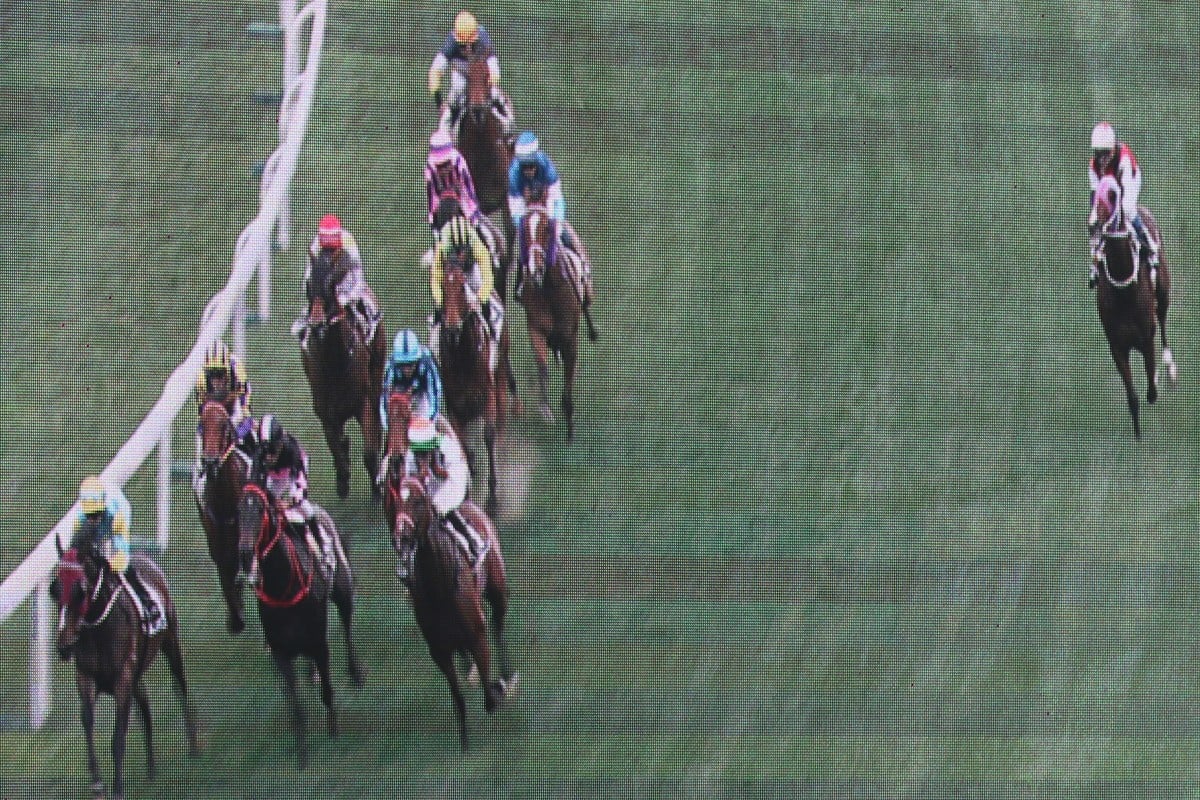 Multimillion (right) runs off the track despite the urgings of Douglas Whyte. Photos: Kenneth Chan

Douglas Whyte has seen pretty much everything in his record-setting career, but he was confronted with a new situation at Sha Tin on Saturday.

The 13-time champion was riding Multimillion, who jumped favourite in the Class Four Tsung Pak Long Handicap (1,200m), when the gelding did his best Derek Zoolander impersonation – he refused to turn right (yes, Zoolander couldn’t turn left, but it’s the same thing – neither are ambi-turners).

Multimillion was leading at the time, but when the turn came he ran straight off the track, despite Whyte trying desperately to keep him following the rail.

“In all my 21 years here, this is the first time I thought I was going straight through the outside rail,” Whyte said.

“He didn’t want to turn and I thought I was going to end up in David Ferraris’ stables.”

There was a stewards’ inquiry afterwards, but it went under the category of racing incident, with Multimillion now needing to complete a series of trials around a bend before being allowed to compete in a non-straight race again.

There was a further scare for Whyte in the ninth race when his mount Happy Sebring bumped the barrier upon jumping, knocking the outside of the jockey’s left leg and putting a tear in his breaches.

The Durban Demon was stood down from the last race, and with just two meetings remaining in his illustrious career, everyone wanted to make sure everything was OK.

“I’ll put a bit of ice on it, I’ll be fine,” Whyte said. “I just want to make sure I’m right for my final two meetings.”

We should probably just call Frankie Lor Fu-chuen a specialist at everything – that’s how good a trainer he is – but what he is doing on the dirt is nothing short of remarkable.

He had two runners compete on the all-weather track on Saturday – Good Fit ($4.50) and Imperial Concorde ($12) – and both won under the guidance of Karis Teetan, meaning his past four runners on the surface have all saluted.

Frankie Lor and @KarisTeetan combine to potent effect again on the Sha Tin AW: Imperial Concorde makes the Mauritian work hard in rear from a long way out but powers home up the centre to thwart Volpino, Kiram and Unicron Jewellery in a blanket finish #HKracing pic.twitter.com/GV0wy4vyrE

Since Lor began his training career at the start of last season, he’s had 89 runners on the all-weather track for 23 winners (for a strike rate of 25.8 per cent). That is amazing.

What makes him so good at it?

“It’s just because of the horse,” Lor said. “Sometimes they are not very good on the turf so you need to change things up. Some love the dirt – there can be a big difference in their performance.

“I don’t do anything different with them, but you can trial them on the dirt and see which ones would race better on it.”

It has been a boon for those punters who have stuck fat with Lor’s horses on the surface – those who have flat bet every one of his runners have made a 36.1 per cent profit.

Tianchi Monster has hit his straps with two wins from three starts, but it might have come too late to secure a place in the Hong Kong Derby.

The Chris So Wai-yin-trained gelding was heavily backed in the Class Three Ho Sheung Heung Handicap (1,800m) at Sha Tin and that confidence was justified as Zac Purton guided him to victory. The New Zealand import holds an entry for the HK$18 million feature, but his rating is only likely to be about 80 by the time the handicapper assesses Saturday’s race, leaving him a little short in what looks a bumper year for four-year-olds.

“People have asked me about the Derby, but his rating is probably not good enough,” So said. “He’s proven at 2,000m and he can run good time, but we’ll see.

“The problem is there are not too many races for these kind of horses. We need to talk about our options with the owner and Zac.”

Romantic Touch is set to chase a hat-trick of wins in the Macau Hong Kong Trophy after being one of four Sha Tin-based horses nominated for the first leg of the interport series.

The Tony Cruz-trained eight-year-old has done his best recent work at Taipa and he will be back again, headlining the Hong Kong attack on next month’s Macau feature. 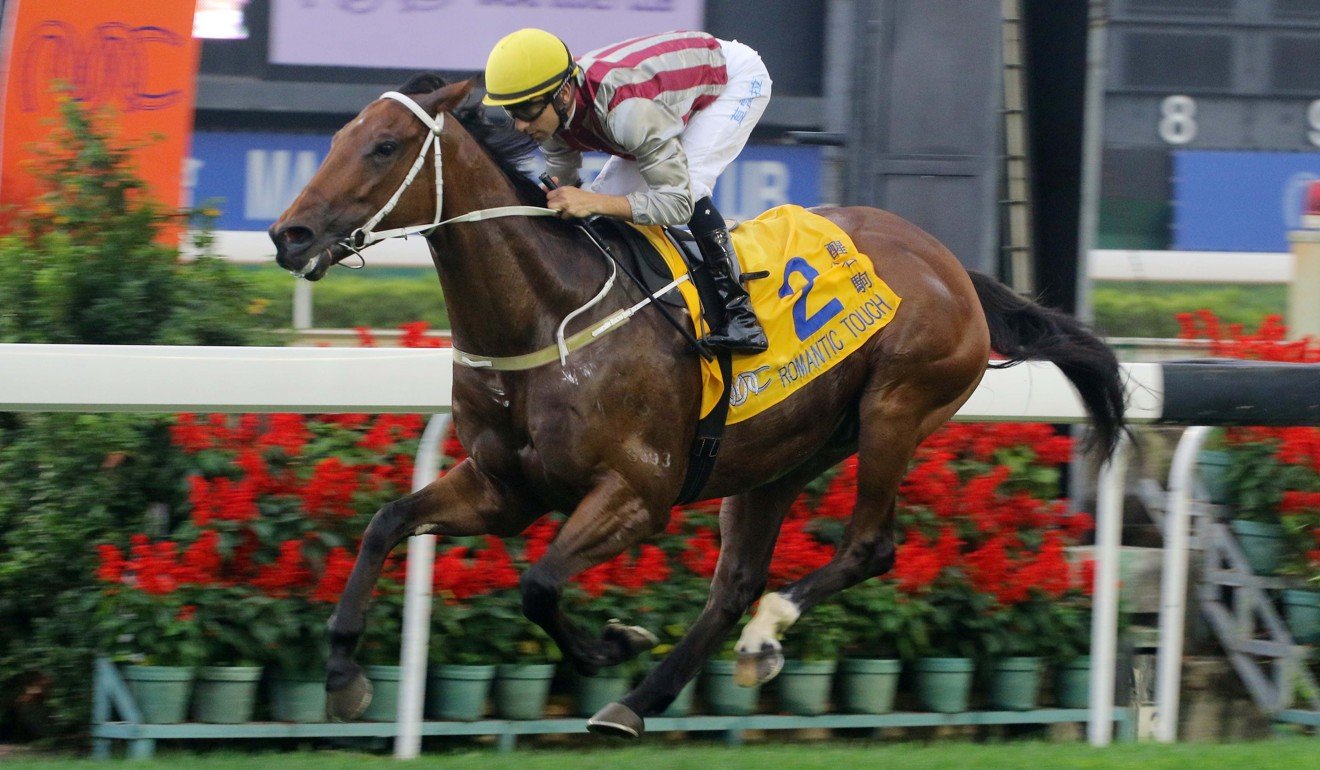 Romantic Touch won last year’s event by four-and-a-quarter lengths and heads into the race in even better form this time around after finishing third to Exultant in last week’s Group Three Centenary Vase.

He will be joined by Born In China (Francis Lui Kin-wai), Horse Of Fortune (Dennis Yip Chor-hong) and Litterateur (Richard Gibson).

Visiting horses have won five of the past six renewals of the Macau Hong Kong Trophy.

The 49-year-old made the announcement during the week after failing to recover sufficiently from the spinal damage he suffered in a fall at Turffontein in April last year.

Delpech revealed he still gets nerve pain down his leg and his doctor told him it was not safe to ride again. The jockey collected 81 winners in Hong Kong, with his biggest successes coming in the QE II Cup, the Hong Kong Cup, the Gold Cup, the Champions & Chater Cup and the Hong Kong Derby – all with the David Ferraris-trained Vengeance Of Rain. The two also combined to take out the Group One Dubai Sheema Classic in 2007.

Delpech, who also won most of South Africa’s top races and holds the record for most wins in a South African season (334), is mulling over the possibility of joining the training ranks.