Zac Purton roars back to life with Sha Tin four-timer 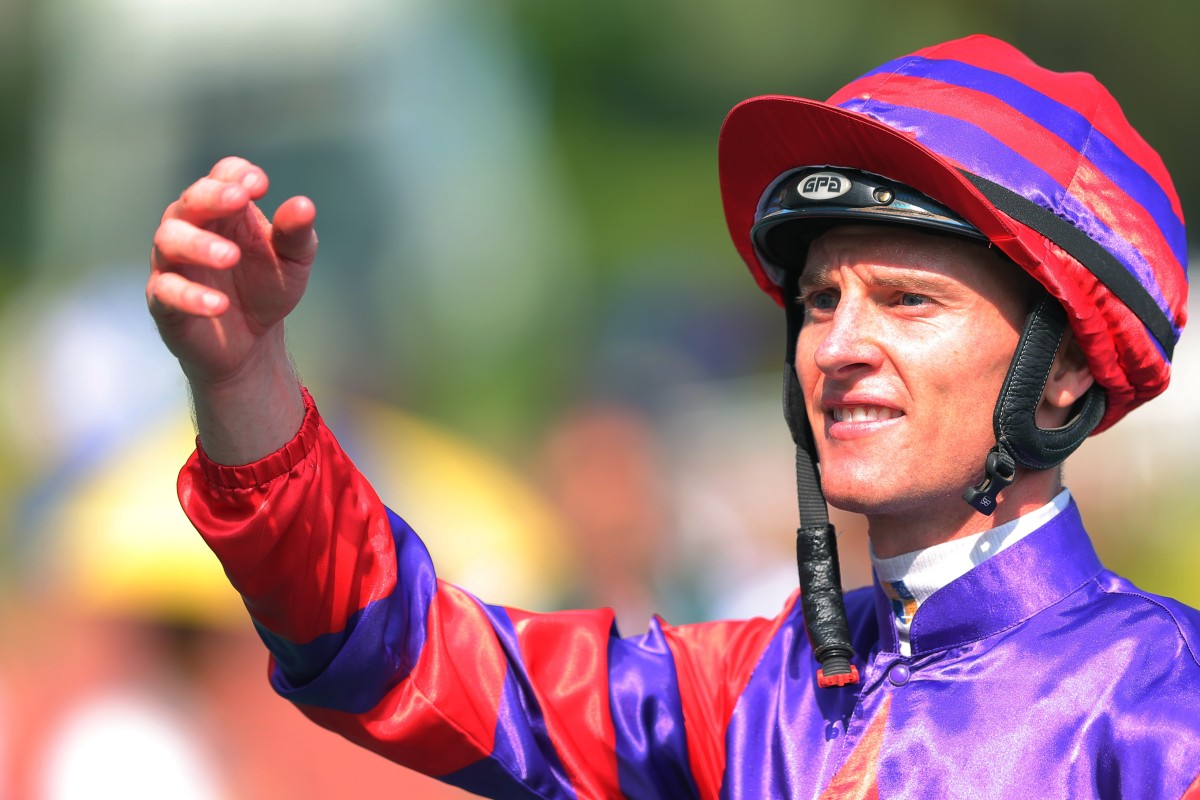 Zac Purton throws his goggles to the crowd after winning on Solomon’s Bay at Sha Tin on Sunday. Photos: Kenneth Chan

Champion jockey Zac Purton roared back to life with a dominant four-timer at Sha Tin on Sunday after leaving Happy Valley on Wednesday night empty-handed for the first time in 147 days.

The Australian took a strong book of nine rides into the meeting and left the star of the show, book-ending the card with Crown Avenue and Happy Fun, along with impressive victories from Buddies and Solomon’s Bay.

The quartet of winners takes his season total to eight after four meetings, placing him atop the jockeys’ championship ahead of rival Joao Moreira, who has six. 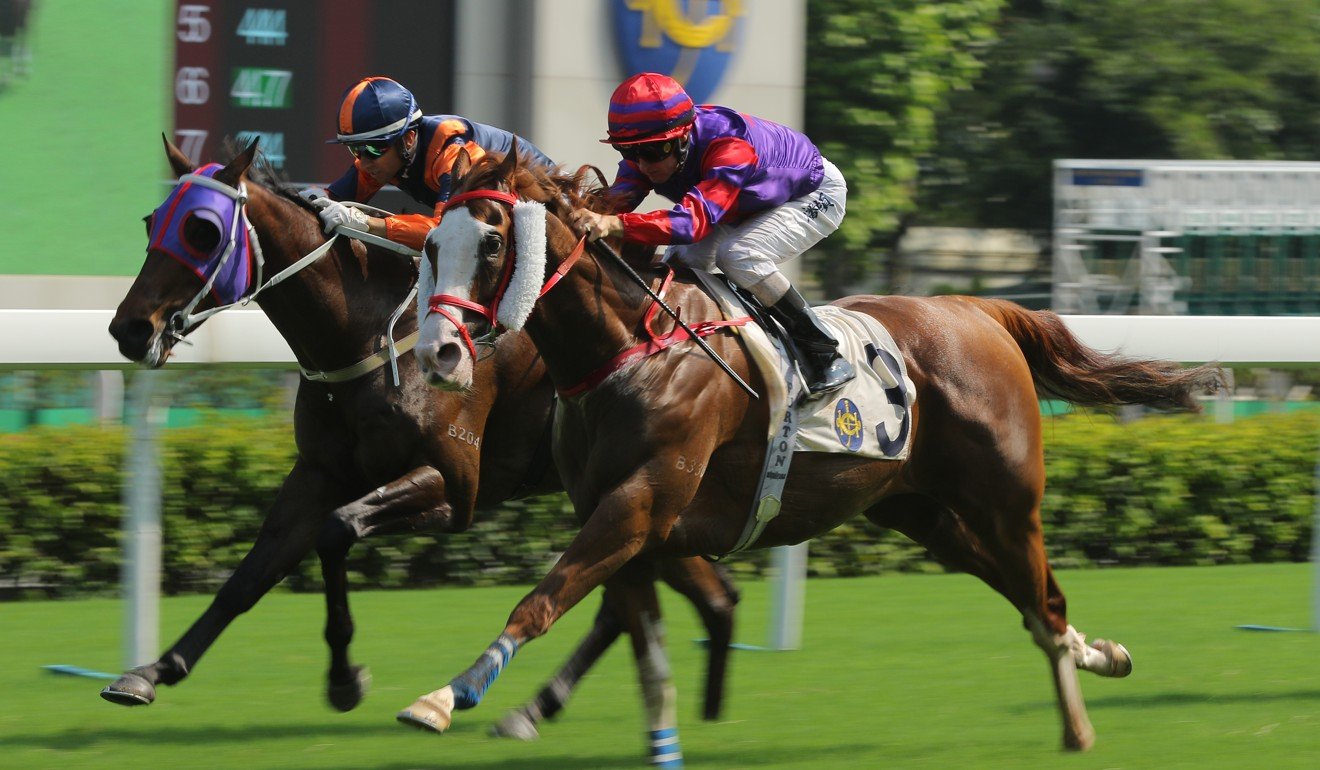 Pressed on his quick change of fortunes, Purton said it was simply “racing”.

“It’s just the way it goes,” he grinned.

Purton thought Happy Fun’s win in the Class Three Woodpecker Handicap (1,400m) had plenty of merit after he and Moreira (aboard the Tony Cruz-trained Circuit Hassler) went toe-to-toe early in the race.

“Happy Fun was the best win of the day because he got pestered the whole way by the horse on the outside [Circuit Hassler] who could have easily sat off him,” he said.

“But he decided to go head-to-head and try to run him into the ground, but he fought him off so it was a very tough effort.”

Trainer Danny Shum Chap-shing was also full of praise for his gelding, saying he was not yet fully fit and expected him to be competitive again, even with a rise in class.

“He was very tough today, he still managed to give a kick even if he didn’t have it to himself upfront,” he said.

It was not all smooth sailing for Purton during the day however with Buddies knuckling badly at the start in the Class Three Swallow Handicap (1,650m).

The four-year-old was able to recover however, despite almost throwing Purton to the ground.

“He was standing up well in the gates, he took one stride, then when he took his second he just knuckled and went down,” he said.

“Of course it’s scary, as we have seen with Tye [Angland], it’s not a good situation to be in but fortunately for me I stayed on. 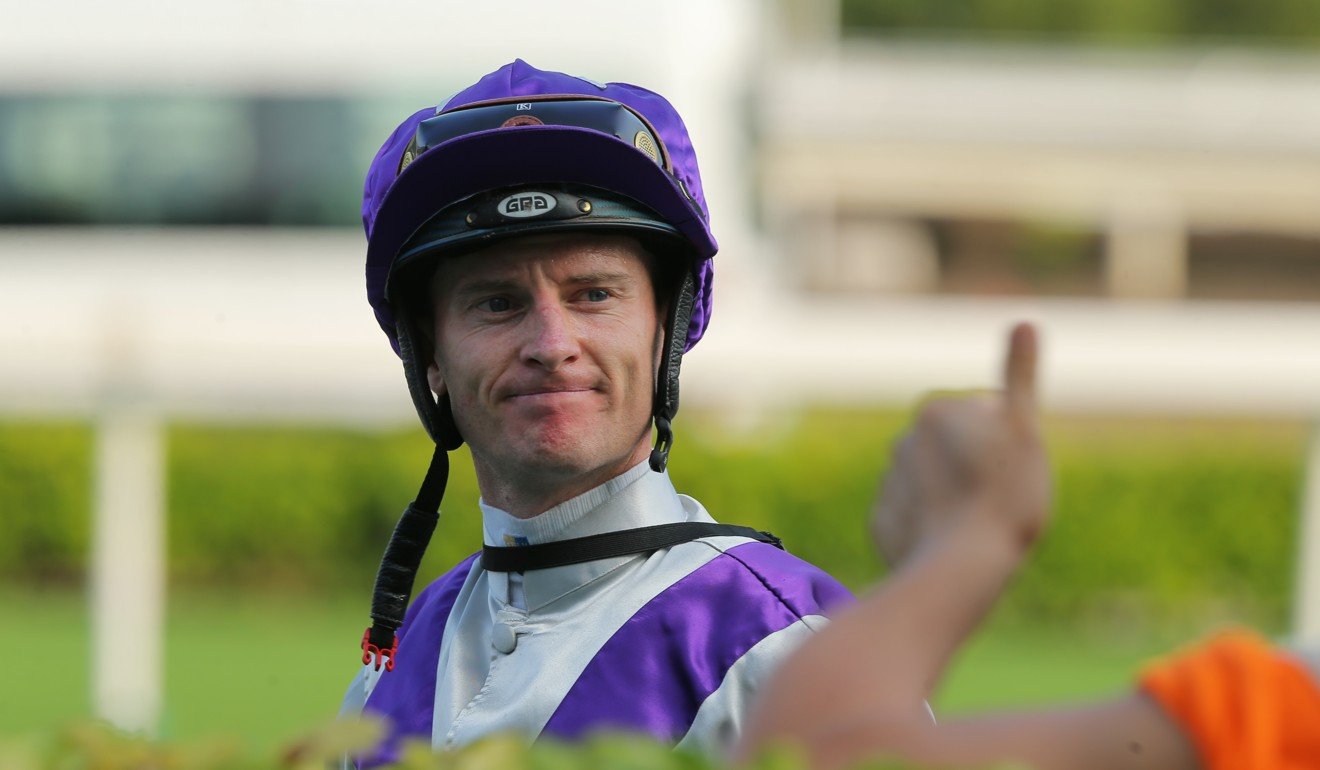 “He has always been a little bit funny in the gates but he still picked himself up quickly and showed good speed to put himself in the right spot, it was a very good effort under the big weight first-up this season.”

Purton also managed to break the nine start run of outs for the Frankie Lor Fu-chuen-trained Solomon’s Bay when he motored down the middle of the track to win the Class Three Fakei Cup (1,200m).

The British import arrived in Hong Kong with a rating of 85 but had not fired before Sunday’s win.

“He travelled really strongly and through the mid stages he took control a little bit; he charged through the field as the pace was steadying. He travelled into it around the corner like he was full of a lot of promise but when I let him go he didn’t want to go on and get the job done,” he said.

Buddies! John Moore gets his first win this season as @zpurton makes it a first treble this term! 3⃣ #HKracing pic.twitter.com/abSYmYsOIj

“Overall, he’s been disappointing. He promised so much when he first came here but now he’s finally won a race and he’s still quite lightly raced here, so hopefully he can go on from this. He’s still not the finished product.”