Alexis Badel is all smiles during his big night out at Happy Valley. Photos: Kenneth Chan

Alexis Badel is on track for his most fruitful Hong Kong stint after booting home a running treble at Happy Valley on Thursday night to take his tally during his current short-term contract to 11 winners.

The Frenchman has already gone past the 10 winners he landed during an injury-interrupted campaign last season with two months remaining on his contract and is only three victories short of his best haul of 14, which came in 2017-18.

It is the fourth time Badel has spent his winter at Sha Tin and his contract runs until February 28, with his recent run of form – which has netted five winners in the last six days – suggesting he’ll walk away with his best return yet.

“That was good. Every season I have had a couple of doubles but this my first time riding a treble,” Badel said.

“It’s just a question of horses. It’s very easy at Happy Valley to lose a race so I’m lucky to win three in the same night.”

Badel began his three-race blitz in the third event, taking out the second section of the Class Four Tsing Yi Handicap (1,650m) aboard Dor Dor to land his first winner for John Size. 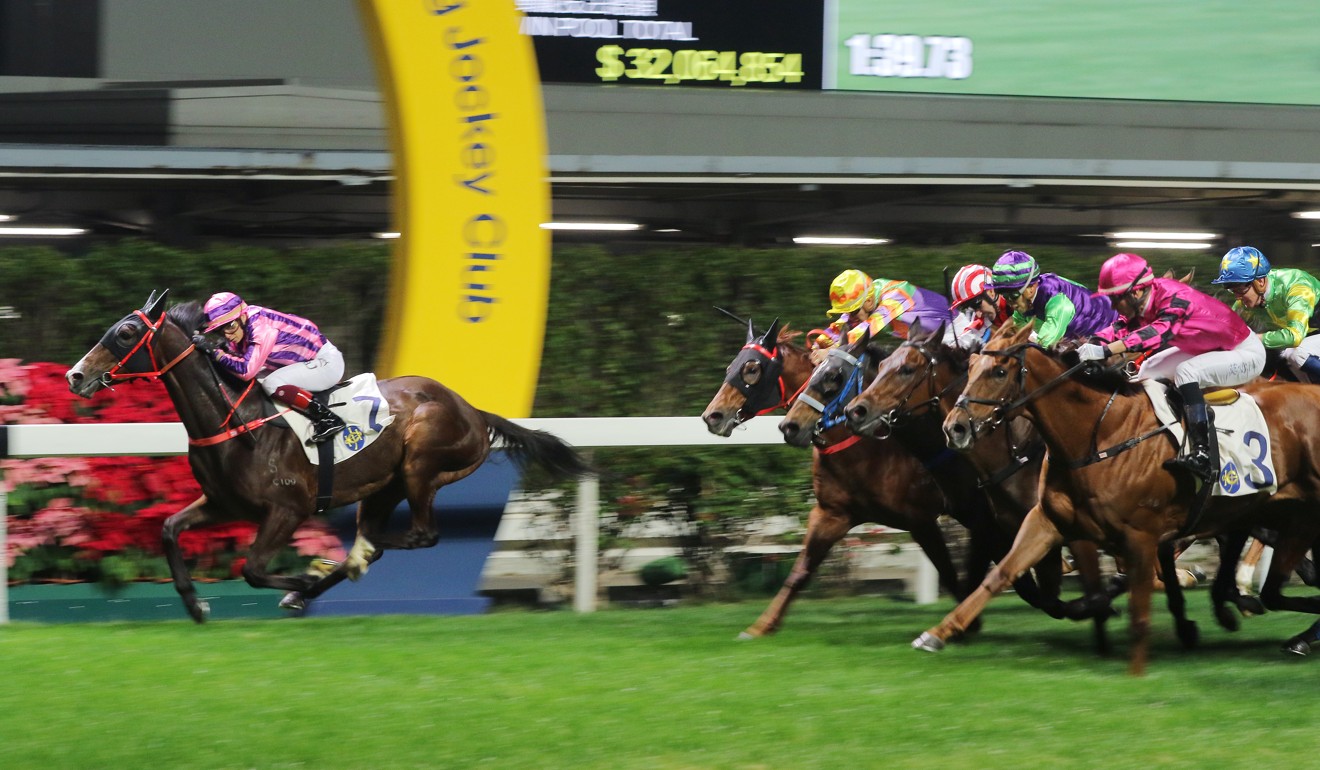 He backed up in the first section of the Tsing Yi Handicap, experiencing his first success with Francis Lui Kin-wai aboard $10.50 chance Management Star.

He completed his first Hong Kong treble aboard the Douglas Whyte-trained Victory Power, with the first-season trainer full of praise for the Frenchman after their fourth win together this term.

“I’ve ridden against Alexis and I’ve obviously seen his assets,” Whyte said. “He’s got a lovely pair of hands on him and once a horse gets rolling, they tend to keep rolling. He’s got a nice rhythm.”

It was Victory Power’s first win at start 22 and came on the back of five consecutive top five placings after transferring from Richard Gibson to Whyte.

Badel rode Victory Power for the first time at the five-year-old’s last start and Whyte admitted that third-placed finish three weeks ago provided the pair with valuable experience.

“Alexis rode the horse last time and a lot of people where critical of his ride, I didn’t think it was the best ride but I was happy with the ride,” Whyte said.

“What was beneficial out of that is we both learned something and when we got gate nine tonight we decided we were going to be positive but not rush him forward, and just stay wide.

“He’s a horse that needs to get going and he needs to stay out of trouble and Alexis just rode a 10 out of 10 race being three wide, no cover – you wouldn’t say that often but it was a nice ride.”

Clement Legend loves 2200m at the Valley! Danny Shum's game 5yo snares his fourth win at the course and distance. #HKracing #HappyWednesday pic.twitter.com/ixdYoXDBKG

It was the five-year-old’s second win of the season and seventh from his last 13 runs after slumping to a rating of 24 a little over a year ago.

Since then the horse has progressed from the bottom of Class Five to the top half of Class Three, with the rating of 69 that he entered the race with set to jump into the 70s.

Trainer Danny Shum Chap-shing wasn’t surprised to see his charge salute again at his pet trip – four of his seven wins have come over the Valley 2,200m – and said he knew early on it would take some time for the son of Ocean Park to produce his best: “He has a stayer type pedigree so we just had to be patient.”

Van Niekerk walked away with a treble of his own after also saluting aboard the John Moore-trained G Unit in the Class Four Ting Kau Handicap (1,000m) and Shum’s Winning Method in the Class Three Kap Shui Mun Handicap (1,200m), while Vincent Ho Chak-yiu landed two winners.

The English import announced himself as a contender for March’s Hong Kong Derby (2,000m) and looks primed to be a big player after winning up to 2,240m in Britain.