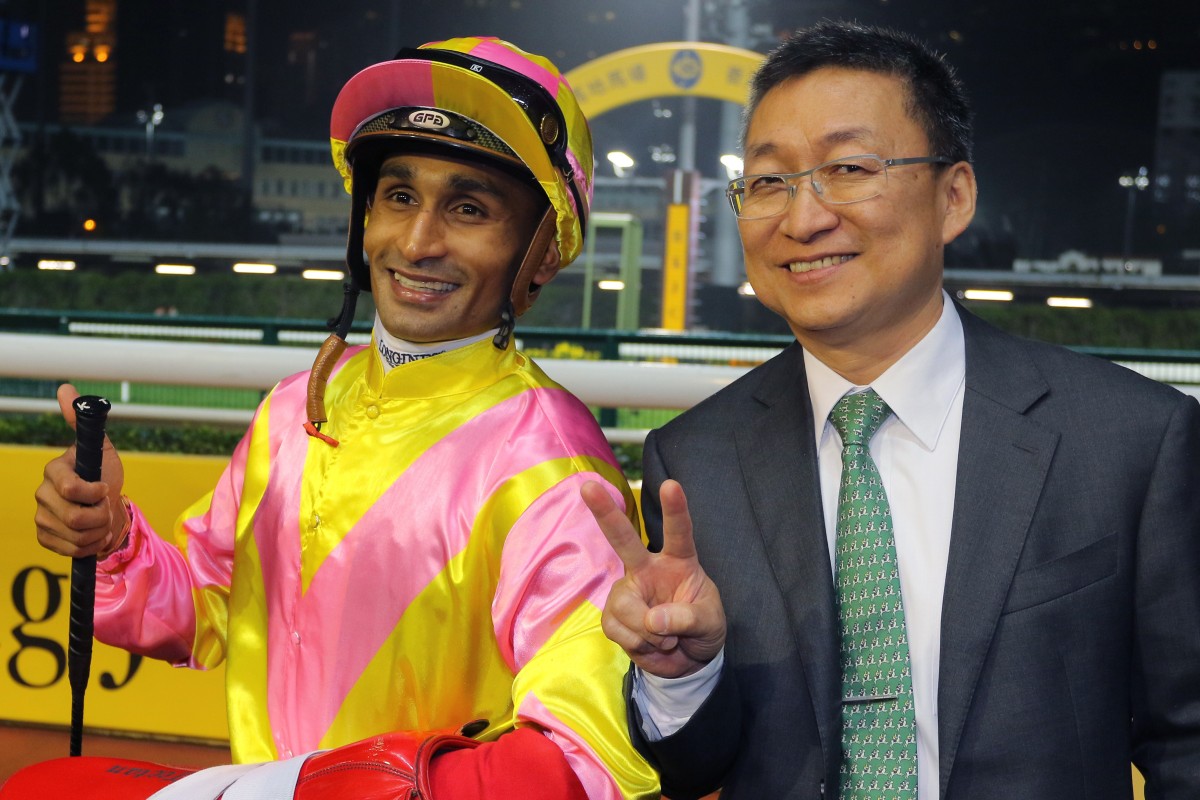 Karis Teetan and Francis Lui are all smiles after combining for a double on Wednesday night. Photo: Kenneth Chan

Francis Lui Kin-wai is enjoying 2020 as much as anyone in Hong Kong racing, the veteran trainer continuing his stellar form with another double at Happy Valley.

The 60-year-old has tasted success at all five meetings so far this year – championship leader Ricky Yiu Poon-fai is the only other trainer to match that feat – with sprinters Victory In Hand and Highly Proactive getting the job done on Wednesday night.

Lui now has nine doubles for the season and an overall tally of 29 winners to sit in outright second in the race for the title, just five wins behind Yiu.

Despite his flying start – he had just 31 winners last term – the handler acknowledges it will be hard to keep it going.

Highly Proactive rallies on the inside to deny Shining Ace in the finale, securing a double for both @KarisTeetan & Francis Lui. #HappyWednesday #HKracing pic.twitter.com/DWsIBLSVSG

“It’s hard to say [if I can continue matching it with Ricky],” Lui said. “I don’t have the middle-class horse, the quality is quite average. At the moment, I’m just getting the best out of my older horses and their rating is going up.

“Hopefully I can keep it going.”

Despite trying to play down his success, there is no doubting the talent of Highly Proactive, who lifted himself off the canvas to capture the Class Three Chater Handicap (1,200m).

After battling for the front early, the four-year-old was headed by Shining Ace at the top of the straight and John Size’s gelding looked to have him cold, but Highly Proactive found a second wind under the urgings of Karis Teetan to prevail and give him two wins and two placings from four Hong Kong starts.

“He fought back, it really surprised me,” Lui said. “In the straight, I thought Shining Ace would win, but he fought back. It’s a good sign because he’s still immature, but after this race he will learn a little bit more.

“He will have to step up to Class Two next time, but I think he can do that.”

It completed a double for the combination after Victory In Hand ran away from his rivals to score his second straight win in the night’s trophy race, the Class Four Hong Kong Club Challenge Cup (1,200m).

“He’s shown a lot of improvement. I asked Karis after the race, he said even at trackwork he can feel his mind is open now, he’s maturing,” said Lui. “We’ll just keep him at Happy Valley for the moment, he’s happy racing here.”

Jimmy Ting Koon-ho was the other trainer to collect a double on the card, continuing his love affair with Happy Valley.

The 47-year-old was forced to watch his maiden treble from a Gold Coast hotel last week, but he was back on track to enjoy the spoils as Flying Godspell and Vigor Fame saluted.

Ting has become such a Happy Valley specialist, he is mounting a legitimate challenge for Caspar Fownes’ title as “King of the Valley”.

His recent run of form at the tight-turning track is incredible, with 14 of his past 16 winners coming at the venue, including his last seven on the trot.

Ting was quick to credit jockey Matthew Poon Ming-fai for getting the best out of Flying Godspell, who hit the line strongly to claim the first section of the Class Four Club Street Handicap (1,200m).

“The rating was a bit low for him. I thought he could win last start, but the rider chased him early,” he said. “If you chase this horse too much, he’s weak late. Matthew listened, took him back early and he had a good finish.”

The trainer was also full of praise for Silvestre de Sousa’s efforts in guiding stable transfer Vigor Fame to an all-the-way victory in the second section of the Class Three Edinburgh Handicap (1,650m).

“This horse wasn’t in top form when he came to my stable, so I only thought he had a small chance in this race,” Ting said.

“But there wasn’t much speed in the race, so I told the jockey to go forward and it worked out for him. “From barrier two, Silvestre didn’t have to push that hard to find the front. A big thank you to the jockey, because I don’t think he would have won without him. The horse needs some help in the last 50m and he’s a very strong rider.

“I think he will improve from that run. He was only 80 or 90 per cent going into the race.”