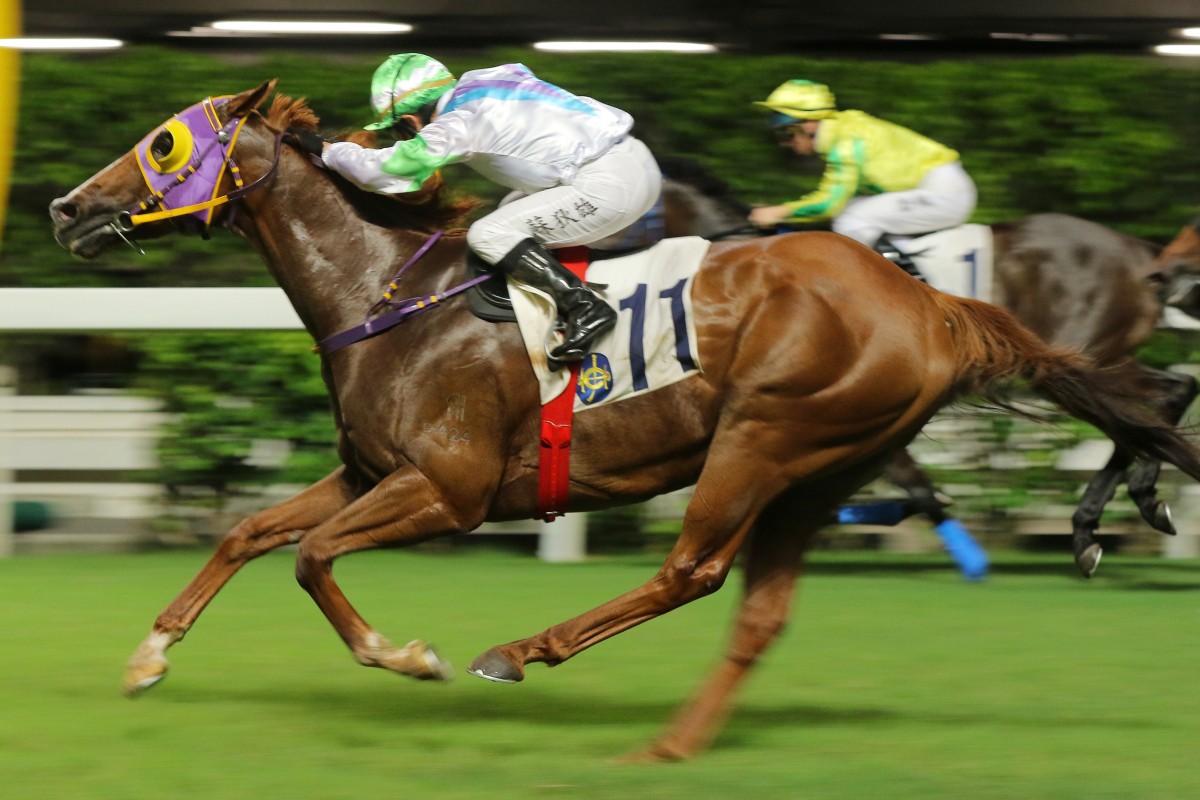 Top Military etched his name into the record books on Wednesday night for paying the biggest win dividend ever seen in the storied history of professional racing at Happy Valley, shocking punters at a mammoth 283-1.

An injury-plagued horse who hadn’t shown much form, a crazy-fast pace and the addition of blinkers – that was the recipe concocted to deliver the upset and provide the highest odds for a winner in Hong Kong since Winning Associates returned an incredible 317-1 at Sha Tin in 2001, a mark that is unsurpassed.

The Benno Yung Tin-pang-trained six-year-old had done very little since arriving in Hong Kong from New Zealand, where he won two of his seven starts when named Swiss Military.

He spent his first 15 months at Sha Tin on the sidelines after suffering a bone injury in his front left leg and once he did hit the track he couldn’t keep up, finishing no better than eighth in his first eight starts, all five lengths or further from the winner.

But everything fell into place for Top Military in the second section of the Class Four Staunton Handicap (1,200m).

Firstly, after not racing for almost two years, he finally had a solid fitness base to work with and his trainer applied the blinkers to help sharpen him up.

Secondly, Sky Treasure and then Sprint Forward went like the clappers up front, setting the race up for a swooper.

And finally, Top Military put it all together, responding to the urgings of Ben So Tik-hung to storm over the top of his rivals, nailing odds-on favourite Sky Show in the shadows of the post to produce one of the biggest upsets ever seen in the city. 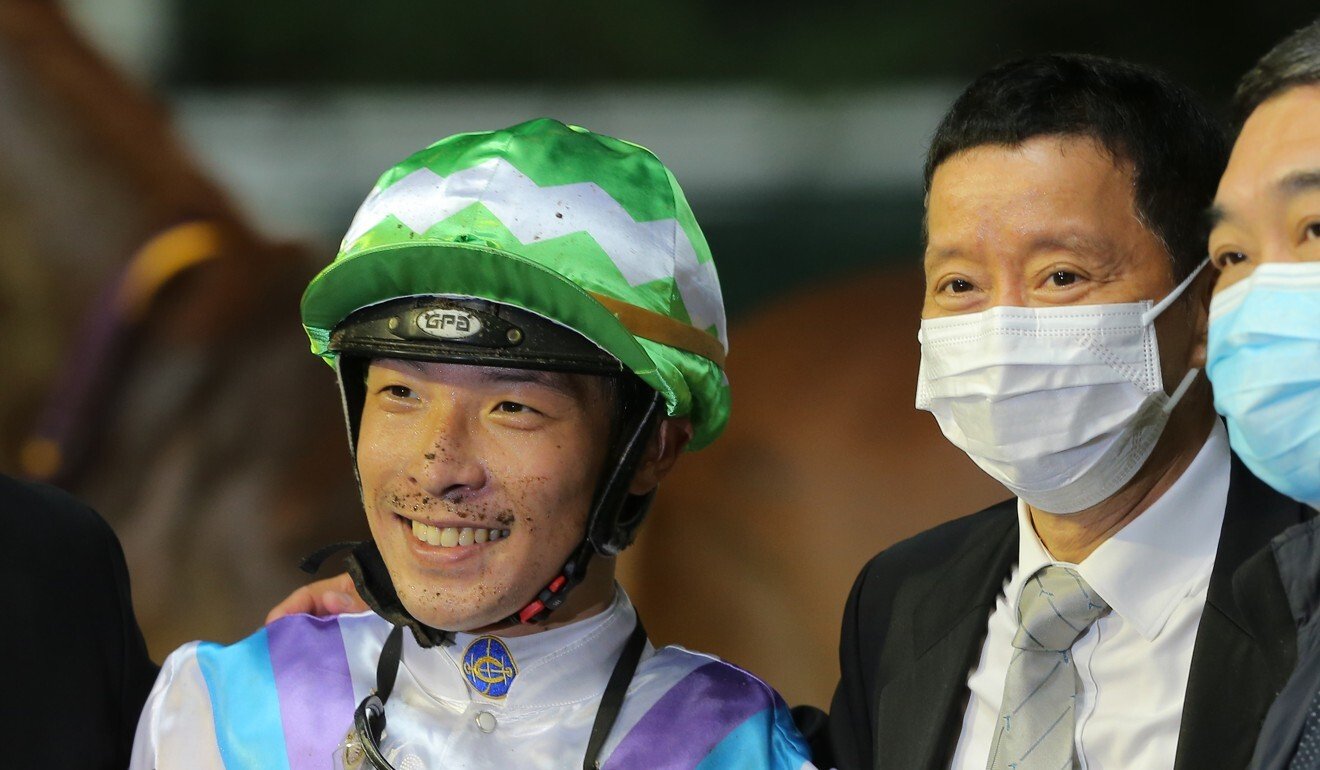 If you were one of the few who dug deep into the form guide and found a reason to back him, congratulations.

One of those might have been Yung, who was smiling like the Cheshire cat in the aftermath.

“This horse had been quite disappointing his last couple of runs so I had to try something and put the blinkers on. He had raced with them on in New Zealand,” said Yung, who thinks Top Military might be even better over 1,400m at Sha Tin.

“I was hoping it would help him stay closer to the field in running and allow him to finish off and it did.

“It was still a big surprise seeing him win, but it’s a great result.”

There were plenty of people sharing in the moment, including So, who secured just his third winner of what will be his farewell season before embarking on a training career.

“Unbelievable,” said So, summing up the stunning situation in succinct fashion.

Ben So makes it two as Divine Unicorn scores at 52/1, giving the rider his first double since November 2016! #HKracing pic.twitter.com/fQWp9GYTAL

Amazingly, the 33-year-old wasn’t done, lifting Chris So Wai-yin’s Divine Unicorn to victory in the Class Three Lindhurst Handicap (1,650m) at 52-1 to land his first double since October 23, 2016.

Speaking of celebrations, Karis Teetan continued his sparkling form with a double on his 30th birthday.

The Mauritian Magician enjoyed a cake earlier in the day but it didn’t spoil his night as he first guided home Dennis Yip Chor-hong’s Murray’s Partners, before taking out the night’s feature – the Class Two Cochrane Handicap (1,800m) – with Reliable Team for Frankie Lor Fu-chuen.

Brazilian Vagner Borges also collected a double, combining with veteran trainer John Moore with Beauty Happy and We The South.

The results lifts Moore to 50 winners for what will be his last season in Hong Kong before he is being forced into retirement.

He still remains an outside chance for the trainers’ championship, just seven winners behind Ricky Yiu Poon-fai.

Leading local jockey Vincent Ho Chak-yiu captured a double of his own, partnering with Francis Lui Kin-wai aboard Winston’s Lad before a front-running victory with Lightning Steed for his former boss Caspar Fownes.

Winston's Lad (@Vincenthocy) charges down the outside to get the better of Daily Beauty in a photo finish. #HKracing pic.twitter.com/3rmz3IN5cK

Lui also finished the night with a brace as championship-leader Zac Purton spurred Highland Fortune to victory in the last race.

The Australian is now five victories ahead of rival Joao Moreira in the race for the title, the Brazilian going home without a winner for the second meeting in a row.