Hong Kong is the world's racing capital, so where is the Belmont Stakes?

Will Hong Kong punters be watching Prince Gibraltar this weekend with an eye to next year’s Derby? Or sizing up Red Reveur as a potential Hong Kong Vase or QE II Cup visitor? California Chrome, in the green cap, leads the field into the stretch in the Preakness Stakes at Pimlico racecourse in Baltimore. Hong Kong punters couldn't watch this race live, just as they won't be able to watch the third leg of the Triple Crown - the Belmont Stakes. Photo: Washington Post/Jonathan Newton

Will Hong Kong punters be watching Prince Gibraltar this weekend with an eye to next year’s Derby? Or sizing up Red Reveur as a potential Hong Kong Vase or QE II Cup visitor?

Well those – and the lack of a crystal ball – are the sorts of arguments that see the French and Japanese Derby simulcasts happening and the Belmont Stakes missing, despite the latter capturing so much more global interest.

Don’t get me wrong, interest is high in Hong Kong – even amongst the usually superstitious Chinese media, there has been plenty of coverage of California Chrome, the chestnut with the “unlucky” four white feet who is aiming to become the first American Triple Crown winner since Affirmed in 1978 when he runs in the Belmont on June 7.

And yet, the world’s horse racing capital is not able to get swept up in the Belmont Stakes hype like the rest of the world.

By law, there is a quota on the number of international races which can be wagered on by the Jockey Club – 15 which don’t clash with Hong Kong racing and 10 on local racedays.

And it’s not like the rest of the world, where a punter can hunt around the different bookmakers to find one offering a market on any given event – whether it be a race, a sporting event or the first country to be invaded by aliens. 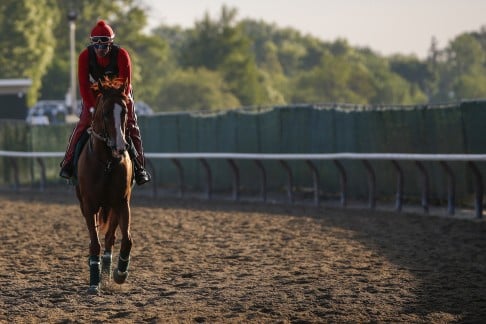 There is a feast lined up for Hong Kong punters in the next 10 days – the Prix du Jockey Club from France, the Tokyo Yushun from Japan and even the Macau Derby this weekend, before the Derby at Epsom in England next weekend. But the piece de resistance, the Belmont Stakes on Sunday week, is missing.

It’s like going to a buffet to find there’s no dessert.

Even trying to watch the race will be difficult – it’s a choice between a virus-riddled stream online or waiting for a replay on Youtube.

In a heated debate among an Australian, a Brit and an American about the chances of California Chrome – the conclusion was the mile and a half may be his undoing – the Jockey Club’s executive director of racing, Bill Nader, explained why Hong Kong punters were set to miss out on a potentially historic Belmont.

“An important factor is that we like to have races with a Hong Kong perspective,” said Nader. “Horses that run in the Prix du Jockey Club may eventually be seen here – horses like Bubble Chic, Chater Dream and Dalwari have come through the race in the past – while the Japan Derby winner tends to step out on the world stage.

“Last year’s winner, Kizuna, went on to run fourth in the Arc, while runner-up Epiphaneia came here and was well fancied in the QE II Cup. So both may eventually affect Hong Kong racing.”

Nader presided over many Belmont Stakes in his former role as chief operating officer of the New York Racing Association, and he certainly understands the allure of the Belmont more than most. “When Smarty Jones went for the Triple Crown in 2004, it was the highest rating telecast of the week in the United States,” he said. “It knocked off Everybody Loves Raymond, which had been on top for 104 weeks, and the race wasn’t even in prime time. It was huge.

“Some Triple Crown bids don’t attract the same attention, but Smarty Jones was a popular horse and California Chrome looks to be in a similar mould. But we had to make the decision a few months back, and it would have been taking the gamble that we’d have a Triple Crown contender – the difference between a Belmont where the Triple Crown is on the line and one where it is not is substantial. And I think that would be the same even here.”

Where was that crystal ball? Instead, for Hong Kong punters, it will be a case of watch from a distance, or maybe on replay, and simply admire and hope. Perhaps we'll get a performance like Secretariat's 1973 Belmont romp.