More horses should be named after cartoon characters like Pikachu

Hong Kong’s horse names are sometimes sniggered at, even derided, and rightly so, but once in a blue moon comes a name which deserves a standing ovation. Hong Kong’s horse names are sometimes sniggered at, even derided, and rightly so, but once in a blue moon comes a name which deserves a standing ovation.

The wild, wicked and downright stupid names are generally the domain of colleague Michael Cox, whose Happy Lucky Dragon Win blog is a tribute to the number of Happys (20), Luckys (25), Dragons (21) and the many variations of Wins (41) currently on the HKJC books.

But let’s forget the idiotic and instead celebrate the unique and the clever  – not mentioning Clever Beaver – that actually allow for some creativity and enjoyment. Laugh with them, instead of at them.

Last Sunday, David Ferraris’ Kiwi import Pikachu broke through for his first win at start five under a typically ugly but effective ride from Neil Callan. Forget the dynamics of the race, though, and simply focus on the name.

For those who spent the 1990s doing something other than watching cartoons or playing computer games, Pikachu is the most popular character from the Japanese game (and later anime series) Pokémon.

A cute chubby yellow...thing...with a lightning bolt tail, bright red cheeks and an excitable expression, Pikachu came to symbolise not only the Pokémon franchise but Japanese popular culture as a whole.

Which brings us to the horse. It was a tough win, but the highlight came with the post-race celebrations.

Kids emerged from everywhere carrying little Pikachu stuffed toys (even though under-18s aren’t supposed to be allowed on course) and they took over the parade ring for the most raucous festivities of the day.

The official Pikachu bandwagon is out in force...one for @chare889...will they be cheering at the end? pic.twitter.com/BOVIoyfJlT

Forget McDonald’s birthday parties for kids, now they come to celebrate the equine namesake of a cartoon character they recognise. And even Ferraris’ intimidating gravelly voice couldn’t quieten the cries of “Pika, Pika”.

“I tried to get the kids to quieten down because I didn’t want them to spook the horse,” the South African said. “Many horses would be spooked, but he stood there completely unfazed. That shows just how calm a horse he is and what a great attitude he has.”

Now, they only need to find a way to take it to the next level.

Surely the next step is to fit the horse with Pikachu blinkers, like this horse in Japan: 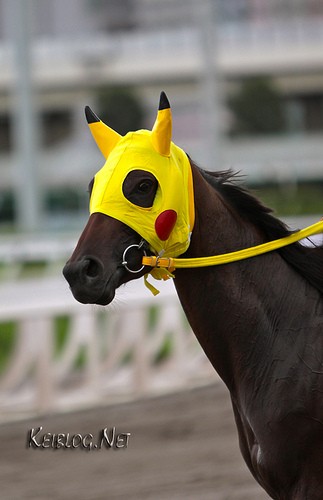 It’s a shame he’s unlikely to reach the heights to get his own plush toy here, because it could make Able Friend’s ridiculous cheek pieces look tame.

Cartoon characters are a good inspiration for names. In fact, there should be more horses named after television and movie characters, allowing a bit more personality and fun to creep into the ownership experience.

At the moment, along with Pikachu, there’s an Aladdin...and that’s pretty much it in terms of cartoon connotations.

The Able Friend plushies are in, sheepskin cheek pieces on for the first up strike pic.twitter.com/8JLDRO3tvS

Wider popular culture references include a Fabio – although a nod to the “most beautiful man in the cosmos” went over the heads of a number of commentators recently – and there’s a Griffindor, spelling incorrect, for fans of Harry Potter.

Then embrace the character, like the owners of Pikachu.

It’s surely more fun than watching a horse with a “proper” name like Perfect Triumph wallow at the bottom of Class Five.