Andrea Atzeni arrives in Hong Kong as one of world racing’s rising stars and brings with him a social media presence that sets the tone for jockeys in the ever-changing new media landscape. 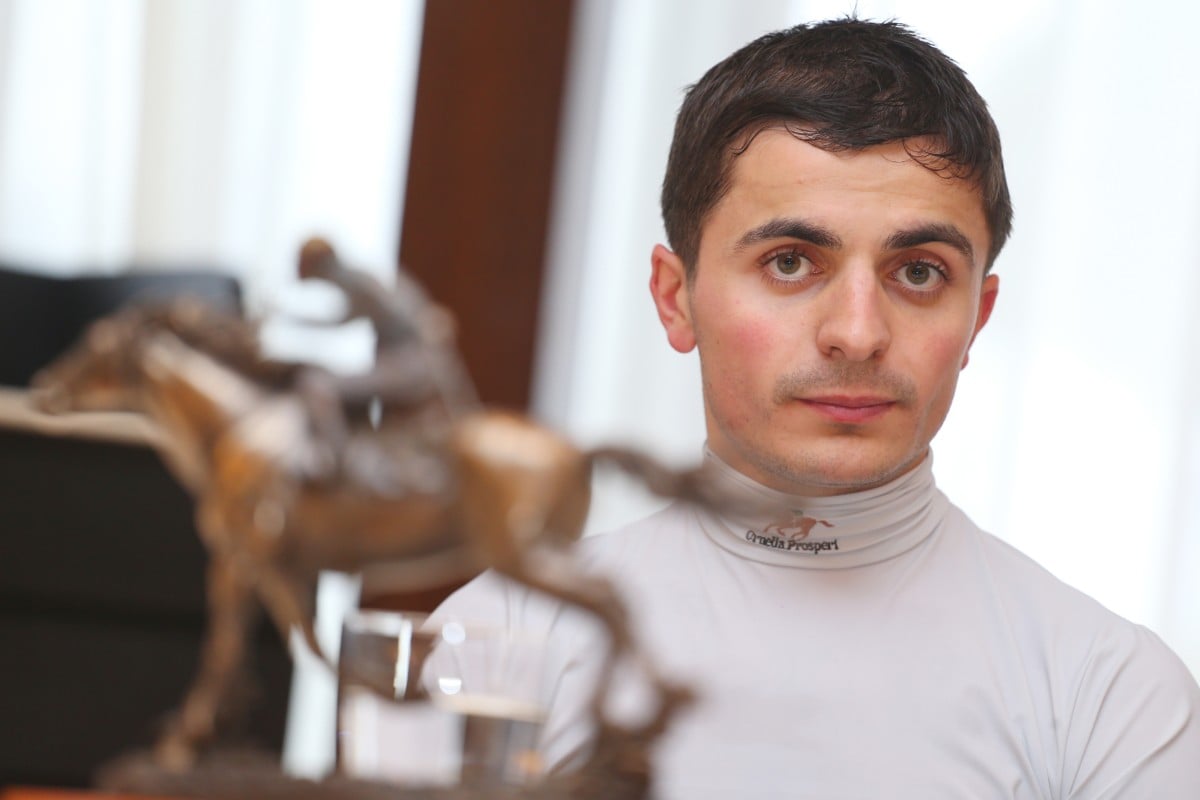 Andrea Atzeni represents the new generation of jockeys in that he understands the power of "new" media, which is at odds with the Jockey Club. Photo: Kenneth Chan

Andrea Atzeni arrives in Hong Kong as one of world racing’s rising stars and brings with him a social media presence that sets the tone for jockeys in the ever-changing new media landscape.

The Italian boasts a professional website that shines in stark contrast with the Jockey Club’s lamentable efforts at online promotions ahead of the upcoming internationals.

We don’t want to be too harsh on the HKJC – English is, or clearly seems to have become, its second language after all – but some of the gaffes are hilarious

Atzeni’s grasp of new media (probably time the “new” was dropped as the internet has been up and going for a while now) and self-promotion sits opposite the old-school ways of some notable veteran riders in Hong Kong, who the 23-year-old will now be competing against, not just on the track, but for rides in the real cut-throat world that is declaration day.

It was ironic that on the same weekend the tech-savvy and well-presented English speaker Atzeni debuted at Sha Tin, the Hong Kong Jockey Club launched its new “interactive theme site” for next month’s international races.

Ironic, because the new jockey gets his website right – clean design, easy to find and user-friendly – and the club gets its laughably wrong on so many levels.

We don’t want to be too harsh on the HKJC – English is, or clearly seems to have become, its second language after all – but some of the gaffes are hilarious.

If you can’t find the site, don’t worry, we couldn’t either – not without a prompt.

A Google search of Hong Kong International Races will take you to all sorts of events, including last year’s HKIR site and also a site promoting dragon boat racing at Stanley. Trust us, it’s online, somewhere.

We used inverted commas with the words “interactive theme site” because that is the club’s description, not ours. And we aren’t entirely sure what is truly interactive about it, other than some simple social media updates.

The highlight is an “interactive” quiz. Unfortunately, the question is completely nonsensical. 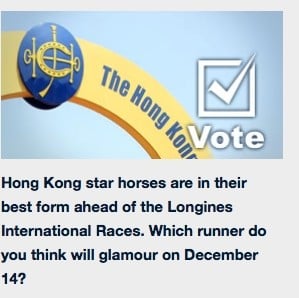 Hmmm, let’s give the club some credit and have a proper think about the answer for a second. Maybe it’s a trick question. Is there an actual betting market available on which horse will “glamour”? Because we better get some rules drawn up, as it isn’t entirely clear what the question actually means in the context of racehorses.

That aside, we are reasonably sure Lucky Nine won’t “glamour” – he looks pretty plain, is a bit of a grinder in his races and his disintegrating feet make it impossible for him to wear heels.

California Memory and Ambitious Dragon? Both old men who need Zimmer frames to get to trackwork. That’s not very glamorous.

In fact, brittle tail syndrome makes it hard for Hong Kong horses to be glamorous at all, so let’s say the answer is “none of the above” and instead predict a sexy French filly to “glamour” on December 14.

The photo on the main page used to promote Jockey Club day (“When lead-up races promise to be every bit as exciting and absorbing!”) is from the infamous 2013 Hong Kong Sprint. 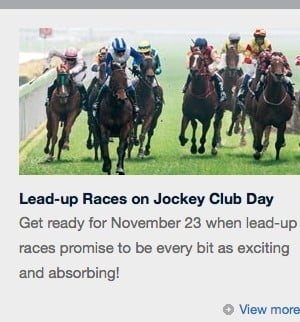 If you look closely, among the cloud of dirt, you can see English mare Jwala prone on the track, fatally injured. Joy And Fun has just miraculously hurdled her, avoiding further tragedy. Jockey Steve Drowne was taken to hospital with serious injuries, including a broken collarbone and a punctured lung.

The Jockey Club forged on with presentation ceremonies, the brass band playing Japan’s national anthem and all, just metres away from where the dying Jwala was still being treated by vets behind a green screen.

The highs and lows of racing pic.twitter.com/dQL5mD4Szt

We hate the word Chinglish, but is there any other way to describe the language on the site? Unfortunately, it’s par for the course for the HKJC’s official Twitter feed – @HKJC_Racing – which comes up with some clangers.

The official feed also seamlessly weaves between promoting big races and personalities, while notifying coldly post-race when horses have “substantial blood in trachea” or have “bled”.

It reeks of a lack of taste, direction and a fundamental misunderstanding of how social media can be best utilised.

After a link to an Ambitious Dragon story is posted (“back with ideal condition”) the next three tweets on the @HKJC_Racing feed are notifications a horse has bled. 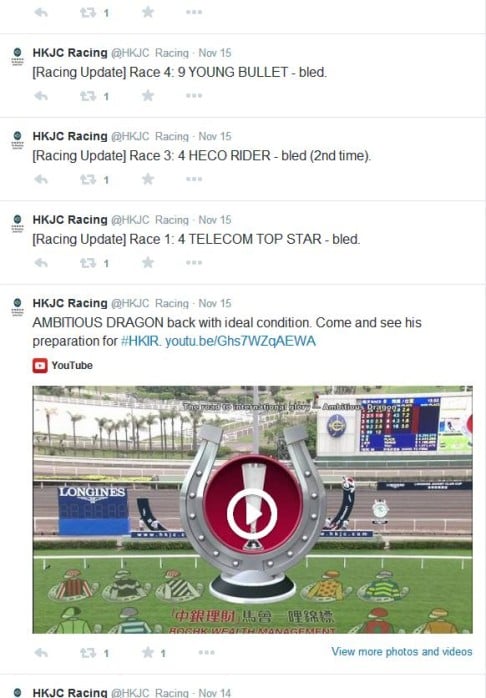 The post-race notifications are important to punters, but promoting racing to a new audience and raceday stewards’ notifications could perhaps best be kept separate.

The HKJC should best be careful with the other “interactive” element on the site – an Instagram feed where fans’ snapshots of the day can be shown to the world (or at least to people who can find the site).

Hopefully, someone checks what is uploaded. Last week a similar New England Patriots promotion backfired badly when an automated reply system thanked a fan and tweeted back his requested jersey, complete with offensive name.

Atzeni’s site isn’t the flashiest in the world, but it’s easy to navigate and features an excellent “day in the life” mini-documentary on this professional and engaging new personality.

Although it’s extremely unlikely Atzeni’s plum new job at Qatar Racing came about because of his website (we can just imagine Sheikh Fahad, upon receiving news of Jamie Spencer’s retirement, googling “young up-and-coming jockey” and finding Atzeni, then thinking, “Hey this kid looks all right”), the site does have a serious side away from simple ego bolstering self-promotion for the Italian.

“I’d like to be an international jockey and I do travel a bit … and I think it’s very important for a jockey to have his own website,” he said.

Of course, Atzeni is now in the lion’s den, where buzz terms like “social media footprint” mean naught. It’s about riding winners and maintaining a clear focus and positive attitude when results aren’t going your way.

Atzeni doesn’t have to look far for an example of how to tough it out. When his good friend and countrymen Umberto Rispoli began his first stint in 2012 he went six weeks without a winner. Rispoli held it together long enough to break through in a big way, though – the dam bursting with six winners in less than three weeks, including a Group One on Rulership, setting the youngster up for subsequent short-term contracts. 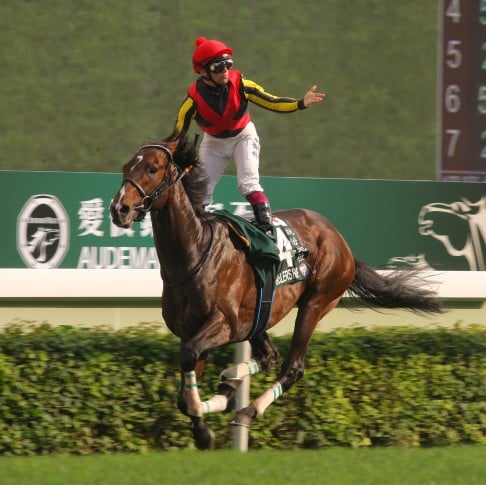 Gerald Mosse has a rarely used Twitter account and no website. But he is a 20-plus year Hong Kong veteran, with an unparalleled big-race resume and now turns up a month or two later than everyone else and promptly attracts top rides.

Howard Cheng Yue-tin hadn’t even got out of a stewards’ inquiry before Mosse bagged the ride on Smart Volatility, leaving one young jockey scratching his head and wondering out loud, “How does he do it?”

Wining and dining, charm – and riding winners helps, too – but what the 47-year-old Mosse has is something only time, experience, an engaging character – and perhaps a few bottles of nice champagne over dinner – can buy.

See, Monsieur Mosse comes from a time when “social networking” was something a little less virtual and however good a website might be, the true test is to come – at the track, both on racedays and in the mornings – for the new school whipper snapper over the next three months.