Two of the world’s great races - England's St Leger and the Irish Champion Stakes - were both plunged into controversy in the space of 90 minutes on Saturday, on opposite sides of the Irish Sea, polarising racing fans and creating debates that seem destined to burn for some time to come. 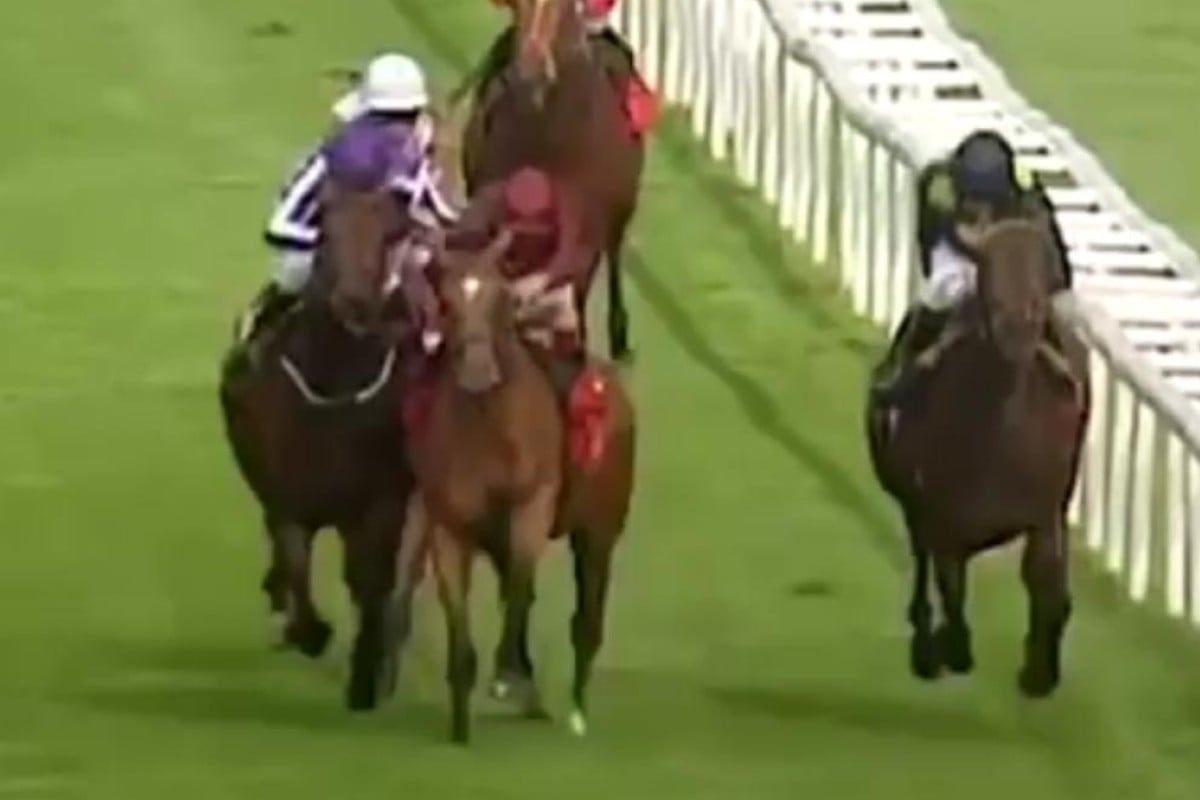 Simple Verse and Bondi Beach lock horns in the closing stages of the St Leger at Doncaster. Photo: Youtube

Two of the world’s great races were both plunged into controversy in the space of 90 minutes on Saturday, on opposite sides of the Irish Sea, polarising racing fans and creating debates that seem destined to burn for some time to come.

At Doncaster in England, the final three-year-old classic of the season – the St Leger – came alive after looking somewhat lacklustre pre-race when Qatar Racing’s filly Simple Verse (Andrea Atzeni) and Coolmore’s Bondi Beach (Colm O’Donoghue) got into a number of scrimmages well into the straight.

Simple Verse was first past the post, but after hearing evidence from both Atzeni and O’Donoghue, British stewards took the extraordinary step of relegating Simple Verse to second and awarding Bondi Beach the race.

The outrage was seemingly contagious, the Twitterverse exploded – how could the stewards possibly make such a decision?

I have now watched the St Leger finish so many times I could pop. I am totally adamant Simple Verse should have kept the race. No doubt.

Genuinely think that was a dangerous move, what happens if jockey/horse gets seriously injured from that Simple Verse manoeuvre?

We need clearer rules in the stewards room, Bondi Beach, on this grounds should be St Voltigeur winner too

Stewards have had a mare, too. How Bondi Beach didn't get the York race is a farce. Stewarding and the rules need looking at. #Centralised

It was unthinkable that the stipes would be called into action again, and on an even bigger platform too – but when the Irish Champion Stakes rolled around just over an hour later and the stewards had a fundamental role to play again, it was like a bad kids cartoon where heads explode, only virtual blood was pouring down a computer screen.

Golden Horn (Frankie Dettori) led into the Leopardstown straight, but as he moved into the shadow created by the grandstand – at least, that’s the explanation proffered – he shifted sharply from the rail, clearly hampering Free Eagle (Pat Smullen), who was moving up strongly on the outside.

On this instance, though, the adjudicators determined the visually shocking bump was not enough to overturn the result. And yet again, the Twitter world went mental.

Sorry but no idea how Golden Horn kept the Irish Champion Stakes.

Looking at the head on camera angle on @AtTheRaces that's serious interference. This is why universal rules interface rules are needed.

Free Eagle would have gone very very close without interference. Rules are wrong. Only reason third not second is the loss of momentum.

Are you kidding me?! He's completed wiped out Free Eagle there. Ridiculous.

This column finds itself amongst a minority opinion, but one which seems evident – not only were both decisions correct under the rules of racing in both jurisdictions, both operated on consistent principles and should be applauded as such.

In fact, the only thing that seems incorrect is how Atzeni only walked away with a three-day ban, for if he was elsewhere in the world, he would have been looking at a charge for improper riding, rather than careless riding.

A major part of the Twitter blow-up around both inquiries was a lack of understanding around stewards and the rules they enforce, as they differ from jurisdiction to jurisdiction.

In world racing, there are two stewarding philosophies, known rather blandly as Category One and Category Two.

In layman’s terms, Horse A cannot be demoted unless stewards are satisfied on the balance of probabilities that Horse B would have beaten it home if not for interference.

Category Two is only found in the United States, France, Germany and most of South America and states: “If the interferer is guilty of causing the interference, and such interference has affected the result of the race, the interferer should be demoted behind the sufferer.”

It is a subtle difference, but one which is crucial in this situation. Much of the uproar came from Category Two countries, therefore, keeping in mind the balance of probabilities is fundamental when analysing both races from last weekend.

First, the St Leger. Watching the head on replay of the second incident and the stewards inquiry alone is not enough to see where the damage was caused – that being at the two-furlong marker, when Atzeni forced his way out of a pocket on Simple Verse.

The shift in camera angles on the main replay makes it appear that Bondi Beach is laying in on top of Simple Verse, but the switch comes at an awkward time as Bondi Beach’s apparent shift is an overreaction to Atzeni’s first big bump on the filly.

Is it more likely than not that Bondi Beach would have finished in front of Simple Verse had the interference not occurred? On the balance of probabilities, the answer is yes, so she had to come down.

While the correct view in our eyes was that Simple Verse should be demoted, even in the moments after the race, there was a lack of confidence that comes from previous questionable decisions by the British stipes. Forget the antipathy on social towards Perth stewards in Australia or towards NYRA’s judiciary in the US, some calls from British stewards in the past have been mindboggling..

For instance, who could forget the 2013 Falmouth Stakes, when Elusive Kate carried Sky Lantern across the width of the July course at Newmarket and still retained the race?

Just three weeks before the St Leger, Bondi Beach himself was involved in another incident in the Great Voltigeur Stakes when he was carried across the track by eventual winner Storm The Stars.

Storm The Stars holds off Bondi Beach in the Great Voltigeur providing William Haggas with a quick-fire double http://t.co/9p9VB29kP4

The result? Placings stood, of course.

A lot of the outrage was that the Great Voltigeur result had stood while the St Leger result was overturned, but a number of critical factors ensured that was the right decision. Chiefly, Joseph O’Brien on Bondi Beach maintained momentum throughout and there was no contact between the horses, so stewards could not be satisfied Bondi Beach would have finished ahead of Storm The Stars otherwise.

For Sheikh Fahad al-Thani’s Qatar Racing outfit, it was the second time in a month they had lost a Group One in the stewards room. In fact, it seems the only winners for the operation are their lawyers – this week, they are in Chicago appealing the disqualification of Secret Gesture from the Beverly D Stakes at the Arlington Million meeting last month; next week, they will return to England for the Simple Verse appeal.

Obviously, for them, there is a lot more at stake than the ridiculously low prize money for a race of its prestige. In both instances, it is their value as a future broodmare that is at risk.

With Simple Verse especially, the difference between a St Leger-winning filly and a St Leger-placed filly is far more than a nose or a head – it could potentially equal millions of dollars over a number of years once the daughter of Duke Of Marmalade heads to stud.

Sadly for them, they look to be fighting a losing battle on both counts. The Beverly D falls under the Category Two philosophy, and whether or not Irad Ortiz Jr overreacted on Stephanie’s Kitten, Secret Gesture affected the result of the race by ensuring Stephanie’s Kitten missed second. Under the American rules, the only right call was to disqualify her.

As for the Irish Champion Stakes, it was a different case altogether.

Could stewards be satisfied that if not for the interference, Free Eagle would have beaten home Golden Horn?

While it was a visually bad clash, the net effect on Free Eagle was not as bad as the bumping duel Bondi Beach had to endure. 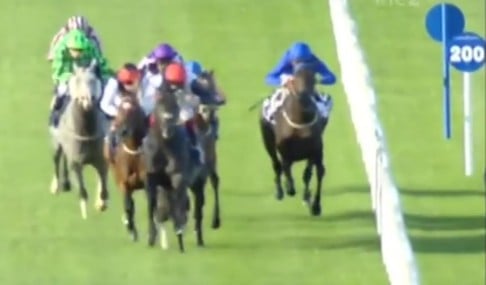 Given that the interference occurred at the 150 yard marker, Free Eagle had time to regather his momentum. And yet, he was not gaining on Golden Horn until Dettori eased the three-year-old down in the shadows of the post.

In fact, inside the 100 yard marker, once Free Eagle had hit top gear again, Golden Horn was comfortably holding him, if not extending his margin.

With the margin almost two lengths, there is no way one could be satisfied on the balance of probabilities that Free Eagle would have beaten Golden Horn home.

If that bump had occurred with 50 yards to go, perhaps a case could be built, but it was simply too far out and he did not demonstrate that he would have won the race if not for the interference.

While the push for rules harmonisation - one set of rules for all jurisdictions - continues to build slowly, it is a dream for a distant future and no help in the current environment.

In this instance, understanding the rules and philosophies makes sense of both decisions and proves, without question, that stipes made the right call in both the St Leger and the Irish Champion Stakes.