Nyquist and the Pegasus World Cup: American racing’s Bold and the Beautiful week

In true dramatic Hollywood style, it’s been a case of The Bold and the Beautiful in what has been an extraordinary week for American racing. Or maybe it has been more The Young and the Restless. In true dramatic Hollywood style, it’s been a case of The Bold and the Beautiful in what has been an extraordinary week for American racing. Or maybe it has been more The Young and the Restless.

Whatever your choice of daytime television poison, horse racing has its own cavalcade of dramas and storylines to sustain any soap opera. And this week stateside has been particularly heady.

America’s greatest two minutes in sport produced a winner for the ages, a potential heir to American Pharoah’s throne, only for attention to quickly turn to a rival organisation attempting to seize the spotlight with a plan, a gimmick, some are calling ingenious and others are labelling foolish.

The Beautiful – or at least the Young – comes through dominant Kentucky Derby winner Nyquist, who proved yet again the best of his generation with a victory to leave the doubters gagging.

His effort to sit just off a sizzling pace and still run solid fractions through the line was the mark of a potential champion, the son of Uncle Mo comfortably holding off the late charge of swooper Exaggerator and, scarily, looking to have more to offer.

The Griffin was a doubter early on, particularly at the end of his two-year-old campaign as Swipe made ground on Nyquist with every start. Maybe he was just a precocious juvenile and that was that? But no, Doug O’Neill-trained Nyquist returned at three even more beastly than before.

He has now proven on two occasions that, at that given point in time, he is just a superior animal to his rivals. He did it in the Breeders’ Cup Juvenile at Keeneland, and he did it again beneath the twin spires at Churchill Downs on Saturday.

It may just be a weak three-year-old crop, although at this stage form at least appears to be holding and, whether weak or strong, Nyquist is king of the castle.

Naturally, thoughts turn to the Triple Crown, with the Preakness Stakes at Pimlico a week from Saturday his next port of call. That’s not the tough part – it’s the mile and a half of the Belmont Stakes that will test Nyquist, a horse who looked perhaps slightly uncomfortable at the end of 2,000m.

First instinct after he crossed the line in the Derby was that he will not stay, and that the memory of Triple Crown glory will fade into the shadows. But Nyquist might not need to be the strongest of stayers to take out the Belmont against a group of horses also not bred to get over ground.

Look at American Pharoah last year. He didn’t need to stay, the Belmont was set up for him by every one of his rivals being unwilling to make it a stamina test and he proved the fastest, the most tactically versatile and the best horse of the bunch. While Nyquist perhaps lacks the same cruising speed as American Pharoah, there is no reason why he can’t ensure the Belmont is run to suit in a similar fashion.

It’s easy to forget that when Secretariat produced the performance of a “tremendous machine” in his 31-length romp in the 1973 Belmont, he was the first horse to win the Triple Crown since Citation a quarter of a century earlier.

And yet, within five years, another two had completed the Derby-Preakness-Belmont treble, with Seattle Slew and Affirmed arriving in back-to-back years in 1977 and 1978.

Could it be that the drought is broken with flooding rain?

And if he does win the Triple Crown, or even if not, what’s next? A tilt at the Travers at Saratoga? A career-ending goal of the Breeders’ Cup Classic? Or do they extend his career and aim at the inaugural Pegasus World Cup?

Ah, the Bold. And in response, the Restless.

The announcement of the US$12 million (HK$93.12 million) Pegasus World Cup by the Stronach Group – the largest horse racing company in North America, the owner of tracks like Santa Anita in California and Gulfstream in Florida, as well as assets like tote company Xpressbet – has caused a ripple through the racing world.

With a flair for the dramatic, Stronach has capitalised on a period when there is maximum interest in American racing – globally, at least – and has certainly got people talking about the unconventional concept.

From Gulfstream Park FB The #ChampionshipMeet Squad. Have you visited the Pegasus yet? https://t.co/98JysJ1IGN pic.twitter.com/bQxDO7rPhN

What does it involve? Owners will pay US$1 million (HK$7.76 million) each to guarantee a start in the Pegasus World Cup, with a maximum field of 12 to go a mile and an eighth (1,800m) on dirt at Gulfstream Park, just north of Miami.

It means that in 2017, instead of the dull desert sands of Dubai, the world’s richest race could be run against a backdrop of golden Florida beaches – even if the race is slated for January 28, the middle of winter.

Could? Well, it will only be the world’s richest race if there are more than 10 runners. If only nine enter, the purse is US$9 million, and it falls short of the Dubai World Cup’s US$10 million.

Connections will not only be racing for the aggregated prize money, though, with revenue from sponsorship, media rights and the tote handle being split equally amongst all runners.

It’s a unique business model, one that – like the Singapore CECF Cup for China Horse Club horses – will remain the domain of the rich and the affluent. Don’t expect rags to riches stories here.

How long it remains the world’s richest race-in-waiting remains to be seen – no one upstages the Dubai Racing Club and Sheikh Mohammed bin Rashid al-Maktoum, so the announcement of a US$12 million Dubai World Cup may only be weeks away. 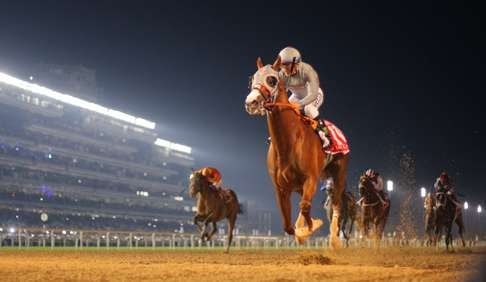 One big potential supporter of the race would be cash-rich Middle Eastern owners, particularly the Emiratis and the Qataris. But with their own big festival, the Dubai World Cup carnival, plus the emerging Qatar meeting, will they give the race a wide berth altogether? Godolphin would be unlikely to run a horse like Frosted in the Pegasus World Cup at the expense of the Al Maktoum Challenge Round Two, for instance.

Who will pay US$1 million and risk drawing 12 around a tight-turning Gulfstream? Who will pay the fee for a horse on the cusp, risking US$1 million among other factors, like stud value? Who, after a long racing season, will try to ensure their horse peaks again for Gulfstream?

For a horse like Nyquist, it would be almost expecting the impossible. He has hardly been out of training since he was an early two-year-old, he peaked for the Breeders’ Cup Juvenile, is peaking again for the Triple Crown races and is expected to be in top order for the Breeders’ Cup Classic, if not a schedule of summer racing before that. How do you expect him to peak again in late January?

It’s a noble idea, an unorthodox concept flying in the face of tradition, but one with more shock value than anything else – and its viability remains questionable.