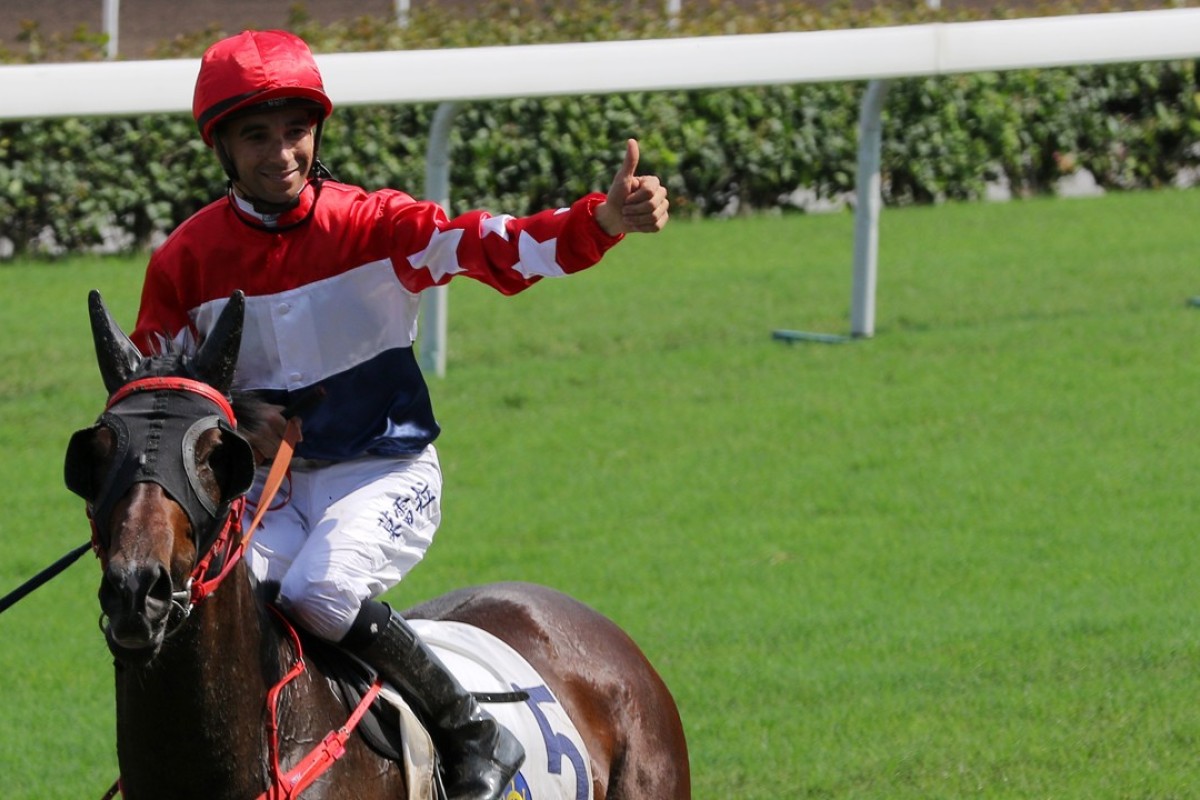 Joao Moreira celebrates with the fans after winning aboard Desmios at Sha Tin on Saturday. Photos: Kenneth Chan

Joao Moreira increased his lead in the jockeys’ championship, but Saturday’s Sha Tin meeting ensured the door is still open for Zac Purton after the Magic Man copped a suspension and HK$100,000 fine.

The Hong Kong Macau Trophy card was dominated by the stewards from start to finish – and the look on chief stipe Kim Kelly’s face an hour after the last race confirmed it wasn’t by design – with fines and suspensions thrown around like losing betting tickets.

Five jockeys were outed on charges ranging from careless riding to failure to ride out a horse, while Macau trainer James Moore was hit with a HK$20,000 fine for negligence.

“It’s very much not the norm and something that is disappointing to the stewards,” Kelly said.

“But nonetheless it happens and it not only happens in Hong Kong but it happens everywhere. Some days are better than others and unfortunately today was one where we saw too much interference and the penalties will reflect that.

Macau riders Peter Ho and Ruan Maia fight out the finish in the finale, but Ho has it on Voyage King. #HKracing pic.twitter.com/cnYbBR9RKe

“We’re in a competitive racing environment in Hong Kong but that has to be tempered against the need for riders to ride safely.”

Moreira’s suspension could potentially have the biggest consequences, with the race for the title the closest it has been in years.

A double gave the Magic Man a nine-win break over Purton, who had one victory, but his ride on Big Bang Bong in the last race was particularly costly.

Near the 950m, Moreira allowed his mount to shift in when not clear of Voyage King, which caused a concertina effect that affected seven other runners.

The three-time defending champion pleaded guilty to careless riding and will miss the meetings on June 6 and 10. 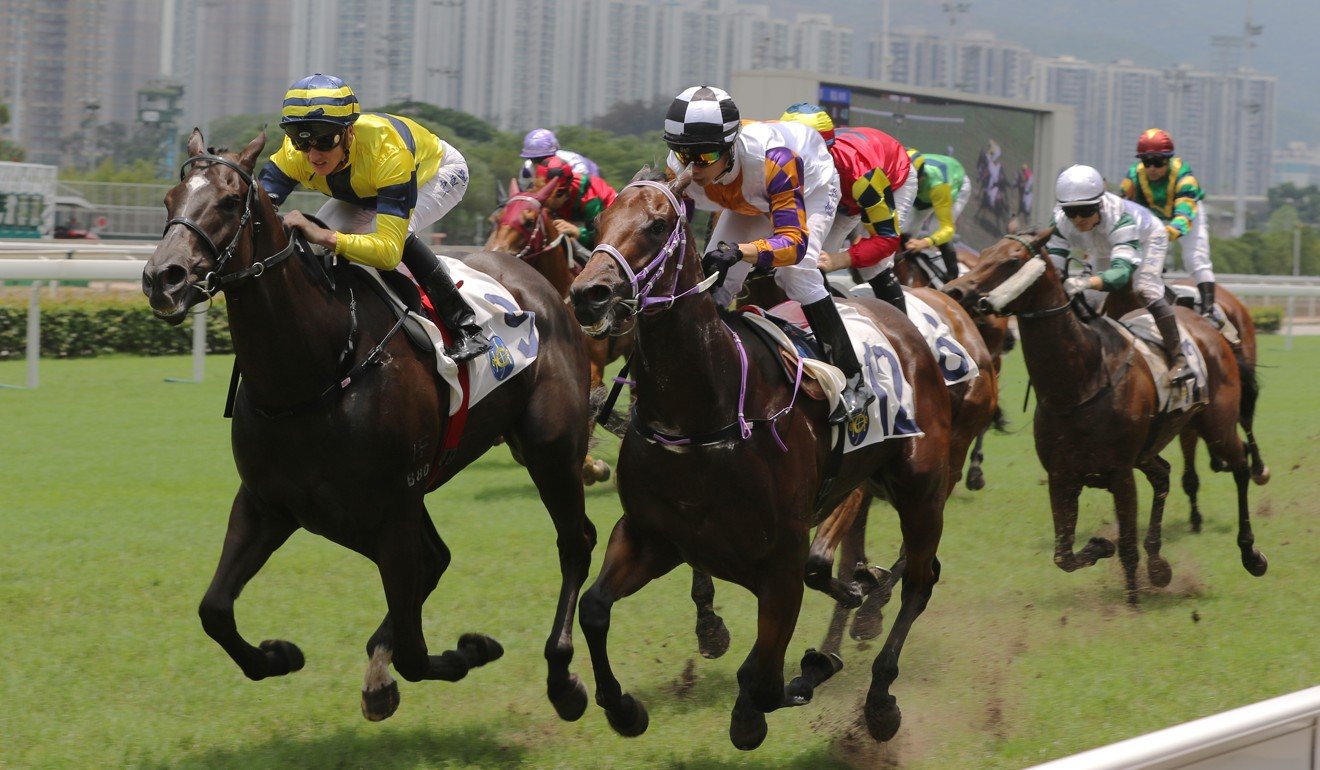 The day started off with stewards interviewing Moore after two of the three horses he brought across to contest the Sha Tin leg of the interport series – Mister Kaopu and Victory Megastar – tested positive to the prohibited substance clenbuterol, both after arriving in Hong Kong and being retested on Thursday, with the duo subsequently withdrawn on Friday.

Moore failed to tell the Jockey Club his horses had been treated before leaving Macau and thus he pleaded guilty to being negligent in the performance of his duties.

“Had it had been declared on the [medical] form, the horses would not have been permitted to travel to Hong Kong because we would have forewarned the trainer of the fact that most likely there would have been prohibited substances in their system [on race day],” Kelly said.

In the opening race, Chad Schofield was hit with a two-meeting ban and a HK$40,000 fine after being found guilty of careless riding for his winning effort aboard Shimmer And Shine.

Shimmer And Shine, in his third career start, and @SchofieldChad provide the first winner of our Saturday meeting #HKracing pic.twitter.com/SlBJIoLtgy

That was quickly followed up by apprentice Matthew Poon Ming-fai being suspended for three days after pleading guilty to careless riding for his work on Hall Of Fame, who finished fourth in the second event.

Over his injuries, Tony Millard’s Shimmer And Shine shows his promise at Sha Tin

Two of the visiting Macau jockeys also got in on the act, with Ruan Maia outed for four meetings for failing to ride his mount out all the way to the end of the race to the satisfaction of the stewards.

Maia finished fourth on Chiu Chow Kid in the Class Four Sai Van Bridge Handicap (1,400m), three lengths behind Experto Crede but only a quarter of a length off Hinyuen Swiftness in third.

But it wasn’t all bad for Ho, with his afternoon finishing on a high note as, despite the interference he copped from Moreira, he guided Voyage King to victory in the Class Three Coloane Handicap (1,400m) to give the visiting contingent something to smile about after a poor showing in the Hong Kong Macau Trophy when their two runners finished second-last and last.

The victory completed a double for Frankie Lor Fu-chuen, who also combined with Moreira to salute with Desmios, taking him to 53 for the season, just five behind John Size’s record for most wins by a freshman trainer.