John Size’s three-year-old is raw, but he has truckloads of ability and remains undefeated after two starts It is only early, but Champion’s Way is living up to his name after his striking performance at Happy Valley on Wednesday night.

The John Size-trained three-year-old is undefeated after two starts and while he never looked comfortable on debut, he showed a huge amount of improvement this time around, proving far too good for his rivals in the Class Four Volunteers’ Challenge Cup (1,200m).

While the margin of two-and-a-quarter lengths is nothing out of the ordinary, it was the manner of Champion’s Way’s victory that really impressed – putting the race away in just a few strides at the top of the straight.

The son of Hinchinbrook did a few things wrong – he’s still raw – but that turn of foot was electric, so it looks like he has the tools to keep climbing up the ratings – and he couldn’t be in better hands.

Champion's Way wins the Volunteers' Challenge Cup to go 2 from 2 despite his immaturity; the exciting 3yo gives @zpurton a double on the night. #HKracing #HappyWednesday pic.twitter.com/H9k8dsLpVI

“It looked like he learned a bit from his first start. He looked a little bit more efficient so he made very pleasing progress after just one race,” Size said.

“I didn’t do anything [on the training track], I was hoping that he’d learn something from the race and it looked like he did.

“He’s shown that [turn of foot] in trackwork, but he’s never shown it in his barrier trials. He’s always trialled as if he’s not doing his best and then on race day Joao [Moreira] had to make him do his best and he did and he’s learned from that.”

With Moreira out suspended, Zac Purton took the ride on Champion’s Way and he was quite taken with the run.

“After watching his first start it looked like he was off the bit the whole way and he was similar in that regard early in the race. When they ran across him he was a bit reluctant to hold his position, he was a little bit unsure about where he was,” Purton said. 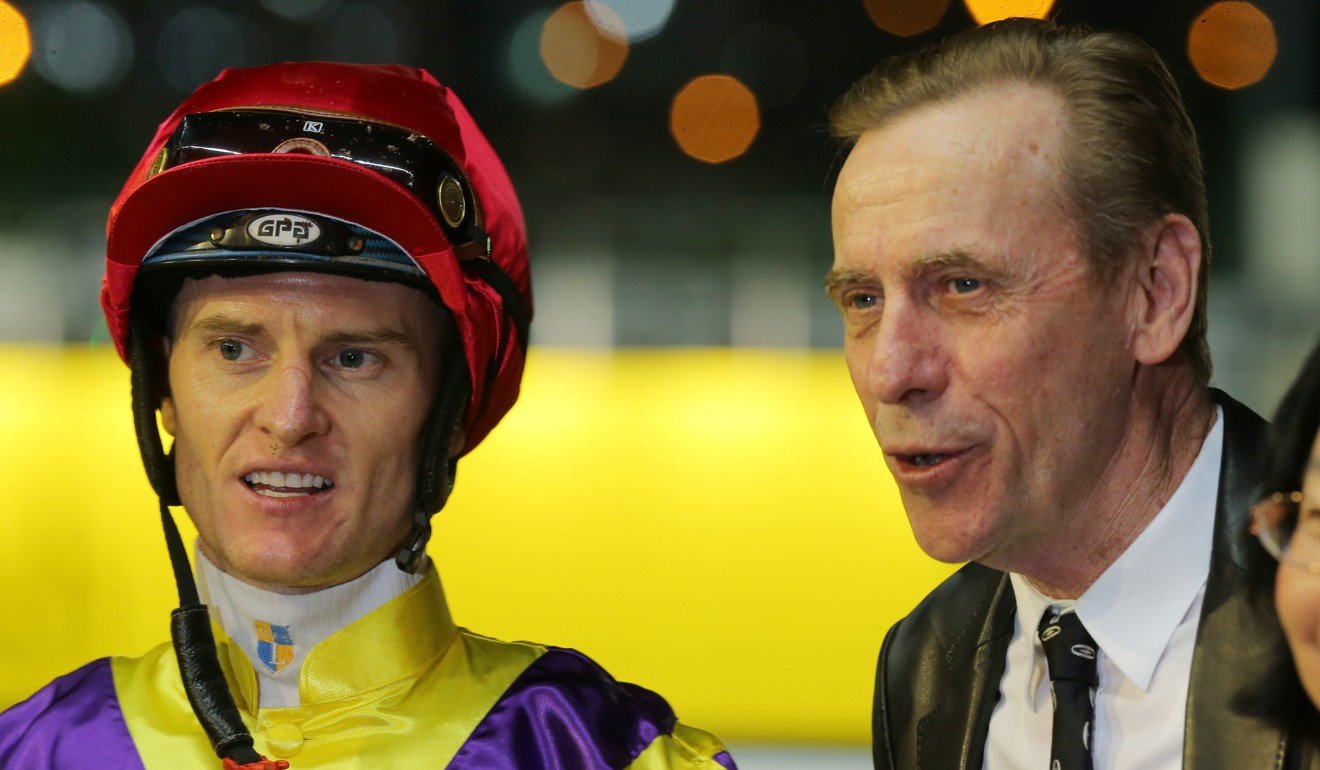 “But he caught me by surprise with his turn of foot and once he got there he just idled so I think there’s more to come.”

The victory was one of three for the reigning champion, who also saluted aboard Danny Shum Chap-shing’s Come On Wongchoy and Little Bird for Ricky Yiu Poon-fai.

The other eye-catching run of the night came from the Frankie Lor Fu-chuen-trained Speed Vision, who stopped the clock just 0.16 outside Ivictory’s track record in the Class Three Sai Kung Handicap (1,200m).

The four-year-old jumped straight to the front for apprentice Victor Wong Chun and was never headed, but the time of 1:08.68 really shocked his trainer.

“I can’t believe that he’s nearly beaten the record,” Lor said. “He’s one of those horses who needs to lead by himself. Everything worked out perfectly.”

Speed Vision blasts to the lead in R5 and he's not for catching under apprentice Victor Wong and his valuable 7lb claim. #HKracing #HappyWednesday pic.twitter.com/m04qtqDOfs

“He’s one of those horses, in Class Four they can win, in Class Three they won’t win,” he said. “He ran well in Class Three two starts back and then he was a bit stiff last start. But he drew the gate, we had a good jockey on and it fell into his lap.”

The win was O’Sullivan’s eighth of the season, and while he remains stuck to the bottom of the championship table, he is optimistic about his prospects for the remainder of the term.

“We’ve got a lot of young horses about to start stepping out and a few of them are looking all right too,” he said.

“I predicted I was going to have a tough first half, I didn’t think it would be quite as tough as this. I had a lot of horses that needed to come down [in the ratings], but I’m pretty happy with the young horses. It’s just a matter of being patient and keeping your head on your shoulders.”

Teetan continued his recent good form, saluting with Tony Millard’s Arcada on top of his win with Merrygowin to take him to 52 winners for the season, matching his previous best from last season.