Cordyceps kept up a strong gallop to easily win after clearing Green Dispatch to lead from a wide gate 1,000m out. The victory was overdue after placing in four prior starts. Not Usual Talent closed well following a patient ride near the back from a wide gate to grab second 120m out at massive odds. He was suited by the step up in distance. Famous Warrior got going late near the inside from behind midfield to get up 50m out for a placing late. He's returned to form in his past three mile runs. Smiling Pride stayed on reasonably well despite a tough run without cover in midfield. Off this effort, he appears to have the ability to hold in his own in this grade. Winning Endeavour ran into a lot of traffic in the stretch drive following a one-off run beyond midfield and should have finished closer. Follow Me came up one-paced in the last 100m with his move after settling outside Winning Endeavouring in the run from the widest gate.

GLORIOUS DRAGON was awkwardly placed shortly after the start outside GREAT TREASURE which shifted out.

From wide barriers, WINNING ENDEAVOUR and NOT USUAL TALENT were shifted across behind runners in the early stages.

Despite being vigorously ridden along for some distance in the early stages, FAMOUS WARRIOR was slow to muster speed.

When being steadied passing the 1400 Metres, GLORIOUS DRAGON travelled keenly.

Approaching the 1300 Metres, WINNING ENDEAVOUR commenced to travel keenly and shifted out abruptly away from the heels of AMAZING.

After the 1200 Metres, SMILING PRIDE was left racing wide and without cover.

Near the 1100 Metres, FOLLOW ME shifted in and bumped WINNING ENDEAVOUR.

Passing the 400 Metres, AMAZING was steadied when disappointed for running between GLORIOUS DRAGON and WINNING ENDEAVOUR which shifted in when racing tight inside FOLLOW ME.

FAMOUS WARRIOR had some difficulty obtaining clear running in the early part of the Straight.

Passing the 300 Metres, WINNING ENDEAVOUR was shifted to the outside of FOLLOW ME when unable to improve into tight running between that horse and SMILING PRIDE.

Passing the 100 Metres, WINNING ENDEAVOUR was shifted to the outside of NOT USUAL TALENT to continue improving.

When questioned regarding the performance of VINCY, Z Purton stated that as it appeared to be difficult to make up ground in today's race, he was asked to have VINCY in a more forward position than it had been in its previous two starts.

He said he had to make some use of VINCY in the early stages in order to comply with his instructions to have the horse in a forward position and, in his opinion, this did not suit the horse.

He said having regard to the manner in which VINCY failed to finish off the race by comparison to its two previous starts, he is of the view that at this time VINCY is better suited by being allowed to race where it is comfortable.

A veterinary inspection of VINCY immediately following the race did not show any significant findings.

VINCY, CORDYCEPS and NOT USUAL TALENT were sent for sampling.

Riding Change After riding in Race 6, C Murray became indisposed and was stood down by the Chief Medical Officer.

Accordingly, permission was given for M Chadwick to be substituted as the rider of FLYING TIGER HERO in Race 10.

Race 5: G van Niekerk (LUNAR ZEPHYR) for shifting in near the 100 Metres.

Race 5: K C Leung (VOYAGE STAR) for careless riding approaching and passing the 900 Metres (from 20 February 2019 until 25 February 2019 on which day he may resume race riding - 2 Hong Kong racedays). 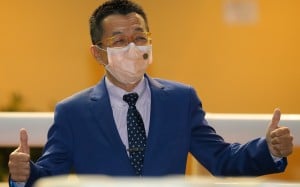 ‘He will at least need to be top two’: now or never for Tsui’s Derby hopeful

Purton returns to his best with fabulous Happy Valley five-timer