Two objections are sustained on the same day for the first time in memory, with Karis Teetan one of the beneficiaries on his way to a five-timer 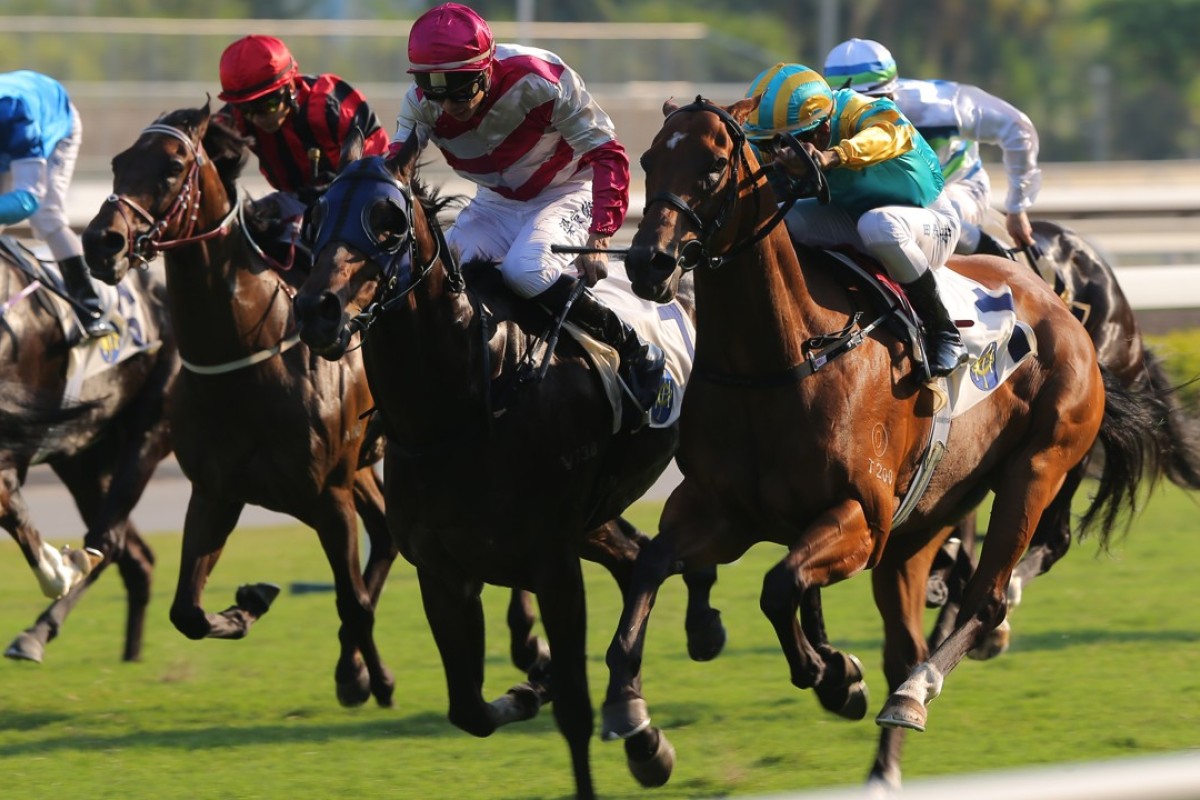 Derek Leung Ka-chun was slapped with a six-meeting suspension for improper riding on a day when the stewards shared the spotlight with Karis Teetan after sustaining two objections.

The Mauritian landed a five-timer, but all the talk after the meeting surrounded the action in the stipes’ room – headlined by Leung’s ride on Endearing in the seventh race.

The 30-year-old was out in front but had High Five (Teetan) coming quickly on his outside and the jockey appeared to veer into his rival with 75m to go.

Endearing held on by a short head to be first past the post, but Teetan and trainer Tony Millard immediately lodged an objection, which was sustained.

After the meeting, Leung pleaded not guilty to the improper riding charge, but stewards determined he committed the crime and outed him. He has 24 hours to lodge an appeal.

It has been years since there was an objection sustained that involved the horse first past the post, but astonishingly it was the second one of the meeting.

In the second event, Italian jockeys Alberto Sanna and Umberto Rispoli went toe-to-toe for the last 100m with the former, on Let Us Win, laid all over the latter, who was aboard Diamond Friends.

The margin was a nose and stewards upheld the protest.

Of course, the action-packed day occurred with chief steward Kim Kelly in Paris for the International Federation of Horseracing Authorities conference, leaving Steve Railton as the man in charge.

It has been so long since the last objection sustained involved the first horse past the post, the stewards couldn’t recall the last time it happened. After some thought, Kelly texted through the most recent one – Blizzard over Travel Renyi at Sha Tin on April 26, 2015.

Diamond Friends was edged out by a nose in Race 2 but got the verdict after a stewards' inquiry to give @umbyrispoli his second win this term. #HKRacing pic.twitter.com/1irHaqVhKh

“I can’t remember the last one and I certainly can’t ever remember two in the one day,” Railton, who has been stewarding for 38 years, said.

“I’m not saying there may not have been two objections in the one day but there certainly hasn’t been two sustained on the one day.”

Improper riding is also a rarely seen charge in Hong Kong, with Tommy Berry the last rider to be suspended back in June 2015.

“It’s a rarely used rule but the stewards felt his actions were improper and he quite deliberately directed his mount out into High Five and that resulted in unnecessary contact and that horse being bothered,” Railton said.

When it rains, it pours. 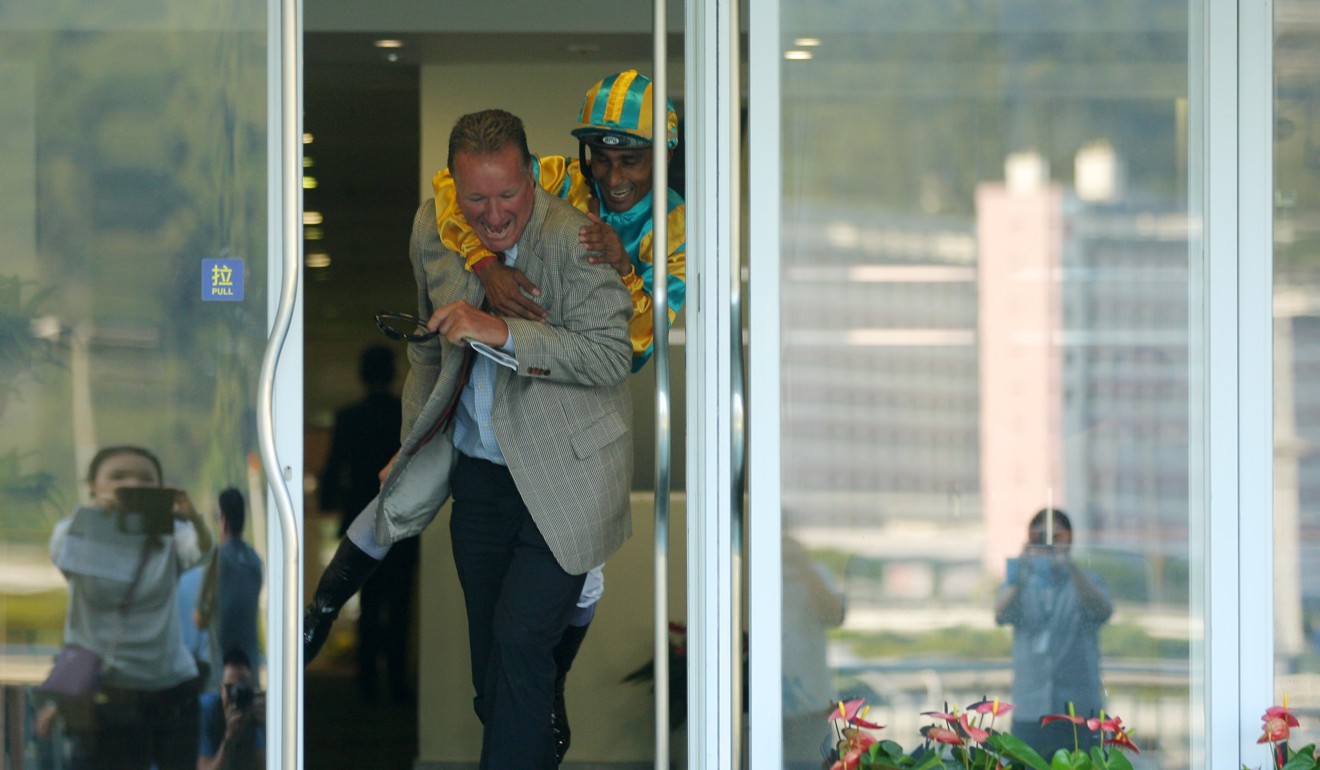 Hong Kong racing got a firm reminder it is dealing with another country this week with horses unable to be transported between Conghua and Sha Tin for nine days.

The situation arose because of “Golden week” – with those in the mainland getting seven days off because of National Day on October 1.

Trainers were given the heads up about the situation so they could prepare for it, but it did make a small impact.

Chris So Wai-yin said he would have put in one of his runners, who is currently based at Conghua, for Sunday’s meeting when entries were extended at the start of last week, but he was unable to because the horse was stuck on the mainland.

The process for transporting horses across the border is very regimented, so it is not as simple as driving a float down.

There were always going to be teething problems with the new HK$3.8 billion facility but it is a good reminder for how organised trainers and officials have to be.

There will be another “Golden week” of holidays around Lunar New Year in February.

For the second time in seven months, Neil Callan and David Ferraris combined to have a horse buck shortly after the start. 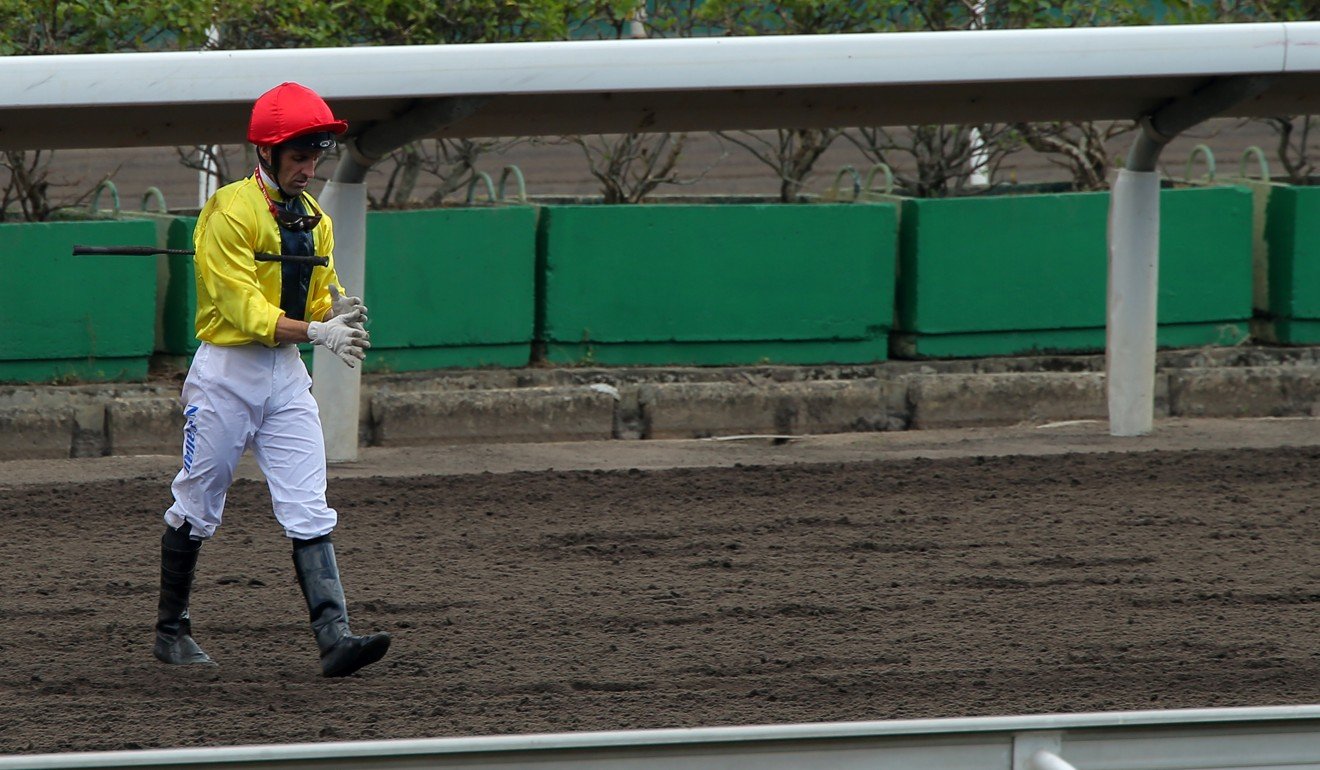 Back in March, it was Daring Heart who pulled the trick at Happy Valley and on Sunday it was Chater Thunder who threw the Irishman off in the second race at Sha Tin.

Ferraris pointed to Callan’s small saddle for pinching Daring Heart the first time around, but now it has happened again, the jockey doesn’t think that is the problem.

“He’s blaming my tack all the time, but I ride in these saddles every day for everyone else and it doesn’t happen,” Callan said.

“I reckon he doesn’t put them on tight enough. It has to be. He jumped well and when he got down low and stretched out, the saddle slipped straight back.”

The Hong Kong Government has given the Jockey Club the green light to simulcast the Cox Plate later this month.

The Jockey Club made the last-minute application to show the meeting as the world’s best turf horse chases a record fourth victory in the time-honoured Group One at Moonee Valley. 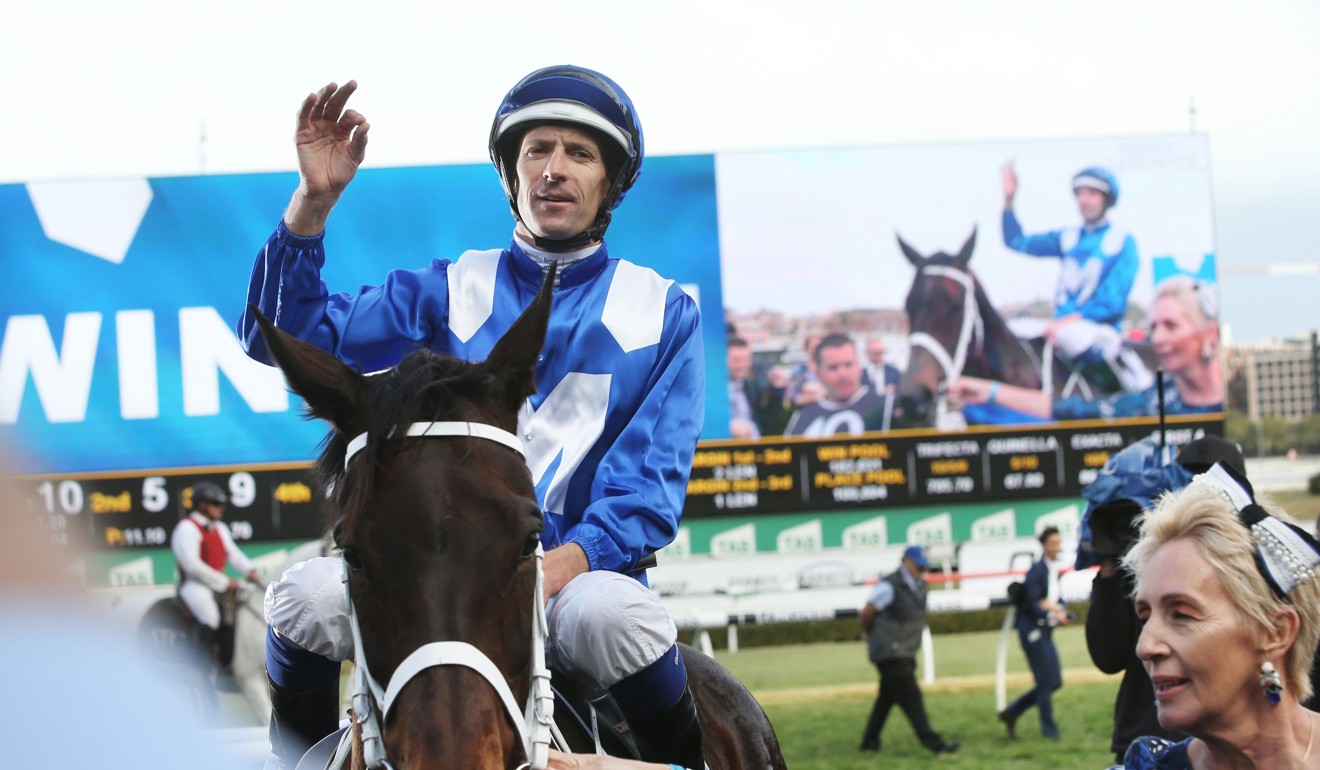 It will be one of just two simulcasts from Australia this year, along with the Melbourne Cup, after the Jockey Club pulled a host of usual simulcasts as a response to the ongoing quarantine dispute.

The government has also approved the Typhoon Mangkhut replacement meeting for Saturday, December 29.

The daughter of Danewin was trained by David Hayes and took out the 2003 Derby, winning four of her 26 starts in Hong Kong and placing 12 times. 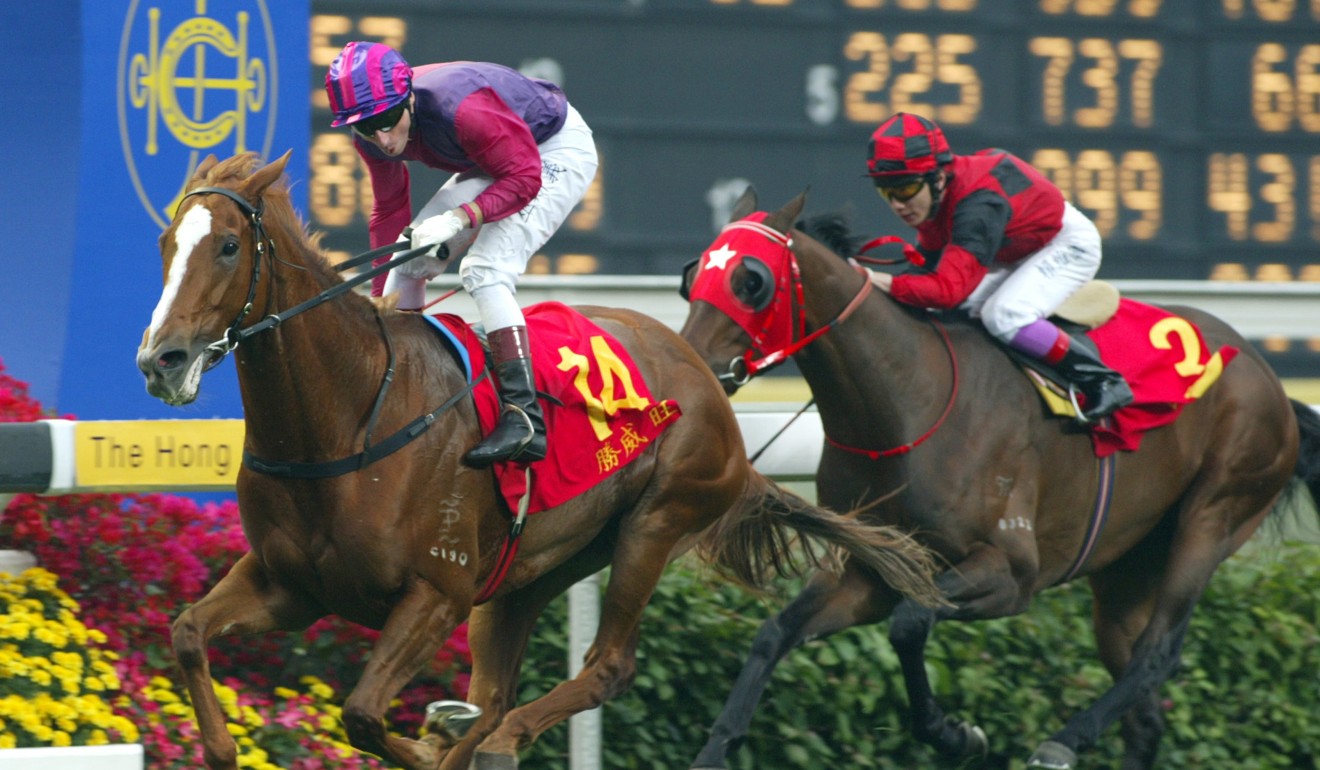 “It was very sad to hear of the passing of Elegant Fashion, who occupies a special place in Hong Kong racing legend as the first filly to win the Hong Kong Derby since Corvette back in 1976,” Jockey Club chief executive Winfried Engelbrecht-Bresges said.

“Our thoughts are with the connections, especially [her owner] Dr Tsoi who has been a great supporter of both Hong Kong racing and the international racing and breeding industries.”