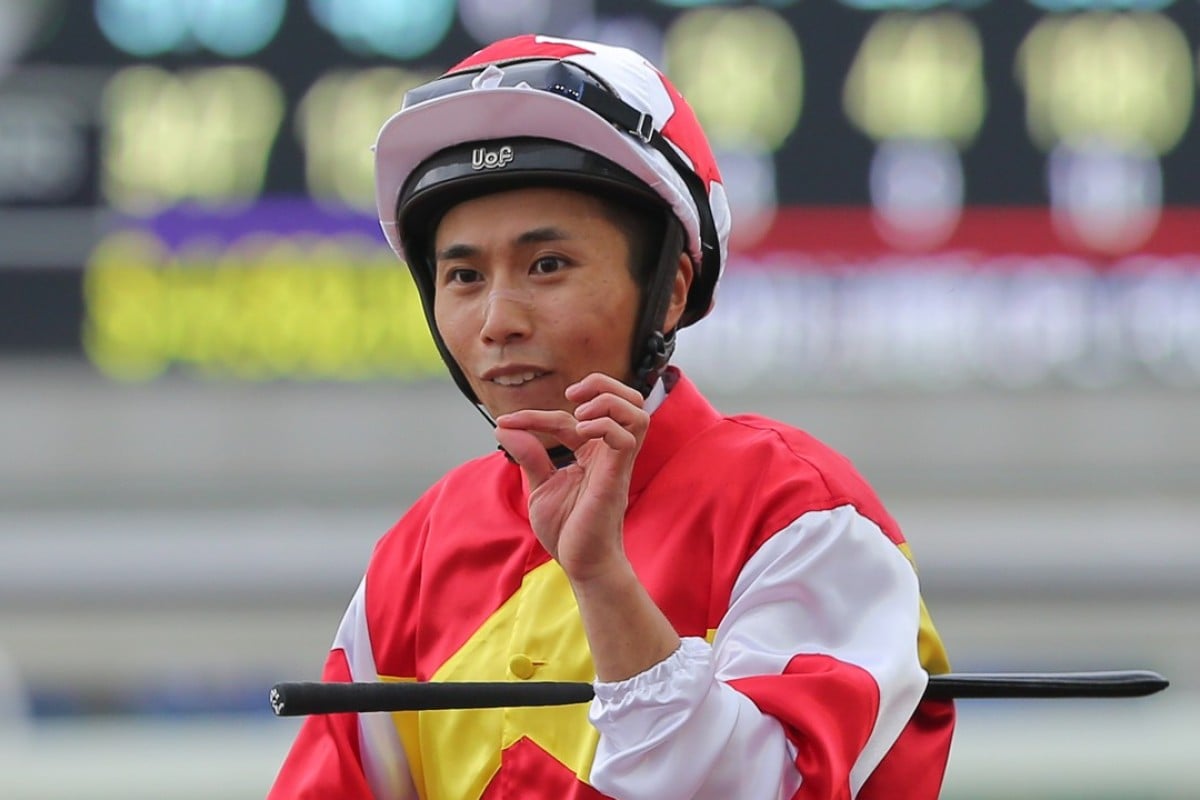 A delighted Matthew Poon Ming-fai secured his first win as a senior rider with Victory Machine and then made it a double when Nuclear Power produced the run of the day, to put him in serious contention for a spot in next month’s International Jockeys’ Championship at Happy Valley.

The 23-year-old collected his 70th winner to complete his apprenticeship last month and he only had to wait until his second meeting as a senior to taste success.

Nuclear Power was out of the picture – literally – on the turn, before growing wings and running over the top of his rivals.

Victory Machine lives up to his name in a thrilling R4 at Sha Tin and gives Matthew Poon his first winner as a senior rider by edging out Music Addition in the final stride. #HKracing pic.twitter.com/tVt5KQoEHk

“I’m so happy, both horses are very special to me,” Poon said. “Victory Machine is just so tough, he has won three times for me – he is amazing, I have no other words.

“Two times last season I nearly won on Nuclear Power, but he had no luck and got beaten and I was quite disappointed.

“This season he was unlucky again first-up and I made a little bit of a mistake on him and then he couldn’t really finish.

“This is the second time I’ve ridden him this season – the pace was strong, he wasn’t really stretching out early, but once he balanced up he saw the gap and went through. He’s just an honest horse who’d had no luck a couple of times.” 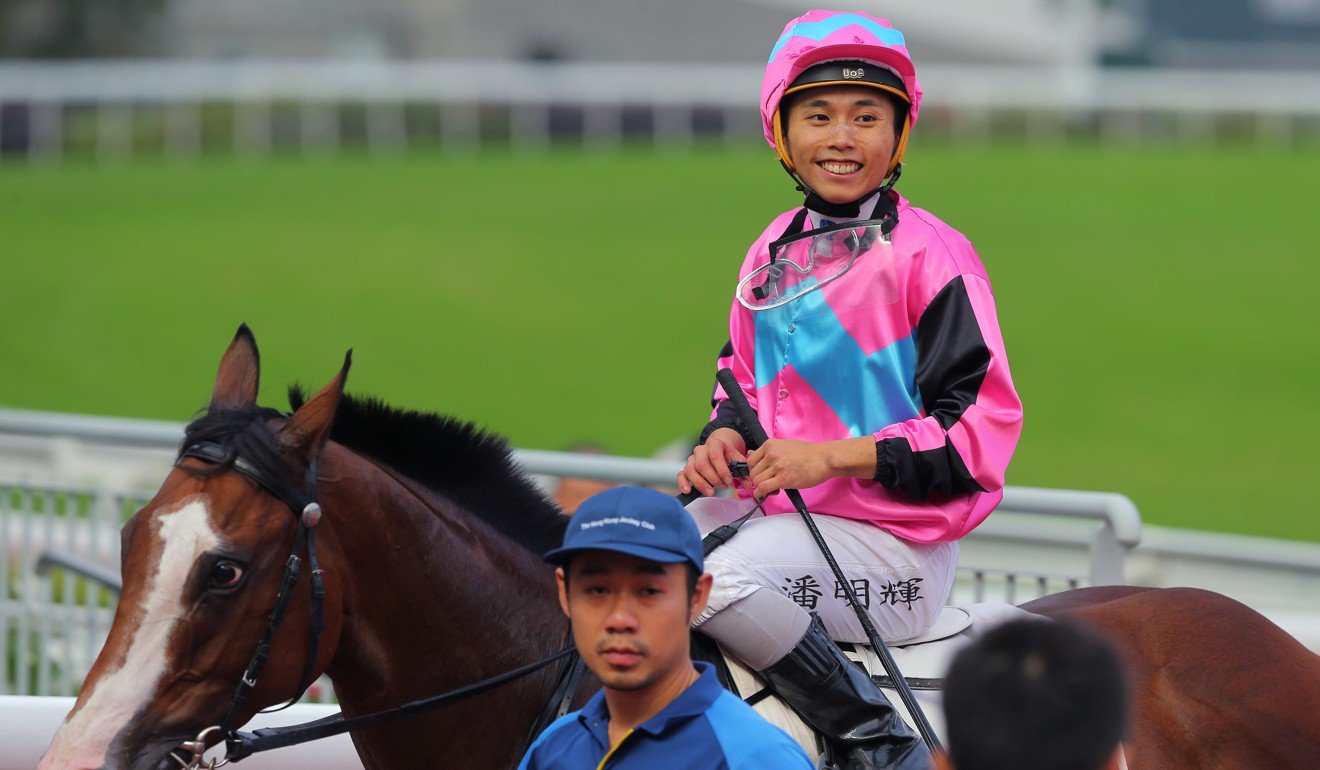 The win takes Poon to 14 winners for the term, putting him outright third on the table and making the battle for IJC spots very interesting.

As it stands, Zac Purton and Karis Teetan are assured of taking their place – the former as the reigning champion of Hong Kong and the latter as the next highest on the table with 24 winners.

That leaves two slot available – one which goes to the next in line in terms of winners and one to go to the leading local.

The cut-off is after the meeting on November 21 and it looks like there are four jockeys in contention – Poon, Vincent Ho Chak-yiu (13 winners), Douglas Whyte and Chad Schofield (both 12).

Matthew Poon doubles up as David Hall's Nuclear Power makes up for a couple of unlucky runs with a telling late thrust in R9 at Sha Tin. #HKracing pic.twitter.com/JpqNGJT3Rl

One of Poon or Ho will get in as the leading local rider, but Poon will miss two of the remaining three eligible meetings through suspension.

“I’ll just do my best, there is nothing I can do but try and ride good races,” Poon said. “If I get in, that would be great, but if I don’t then hopefully next time.

“It is definitely something I would like to do, but it is something I cannot control because I got suspended.”

Either way, the future looks bright for Poon – provided he stays out of trouble with the stewards – as he has plenty of support. 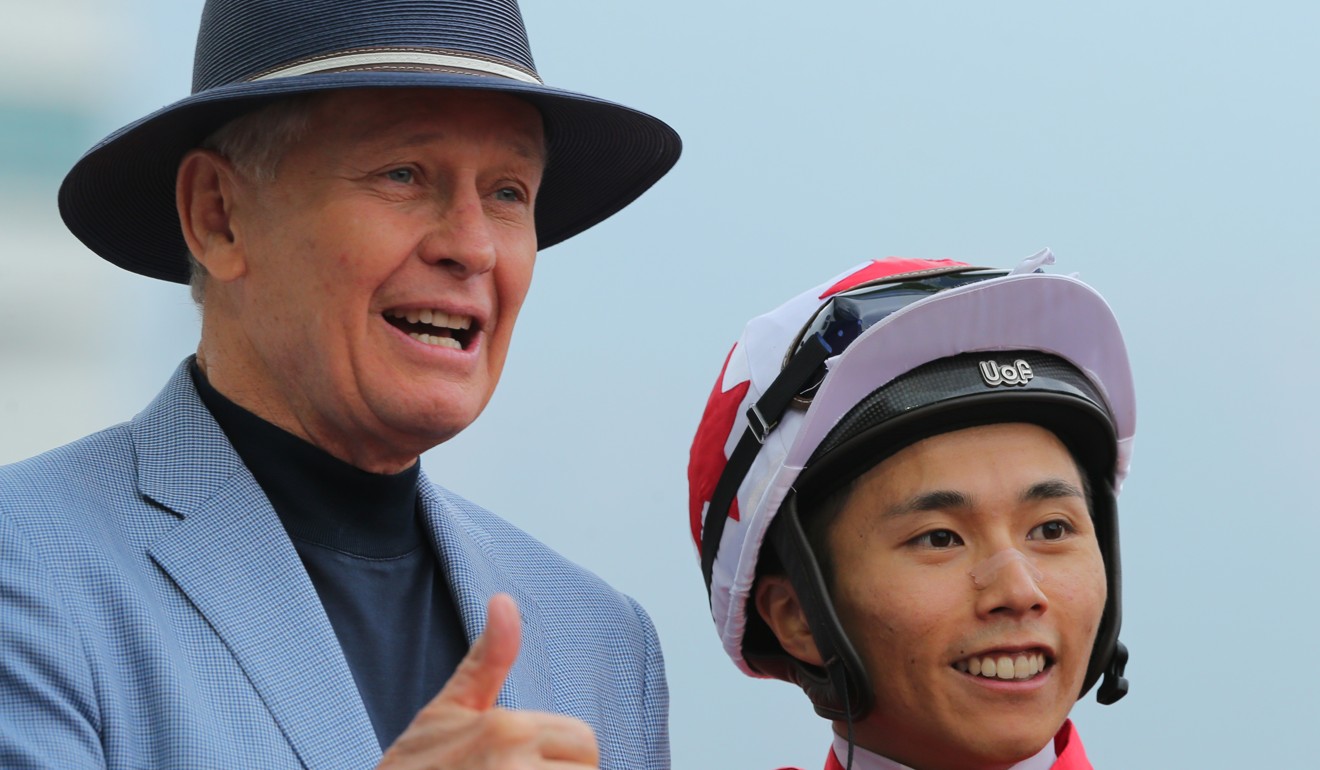 John Moore, who trains Victory Machine, has a high opinion of the youngster and will continue to book him, a positive sign as he looks to establish himself.

“I know he’s only got three pounds but he rode a lot for me last season,” Moore said. “I’ll definitely keep using him, he makes mistakes like all jockeys but the fact is I think he does a good job and he will be successful.”

Poon will add to his international experience when he competes in Sunday’s Singapore Gold Cup meeting at Kranji – a venue where he has already tasted Group Three success twice.

“Singapore is quite special for me, it just feels very comfortable for me to ride over there,” he said. “The pressure is low and people support me, so I really enjoy it.”

It's all tied up at the top of the jockeys' table: @KarisTeetan draws level with @zpurton on 24 as Danny Shum's Clement Legend follows up his Happy Valley success in the Sha Tin opener. #HKracing pic.twitter.com/HA1khHUtKf

Teetan and Chadwick hit with suspensions

Karis Teetan joined Zac Purton at the top of the jockeys’ standings for a brief moment after winning aboard Clement Legend in the opening race, but it came at a cost, with the Mauritian copping a two-meeting suspension for his effort.

Teetan will miss the cards on November 28 and December 2, but will be back for the IJC.

He wasn’t the only rider to earn the ire of stewards with Matthew Chadwick also outed for two meetings for failing to ride out Golden Effort in the third event. Chadwick will be on the sidelines for the first two race days in December.

@zpurton edges one ahead of @KarisTeetan again as Right Choice lands R3 at Sha Tin. Frankie Lor's newcomer takes time to get the message before winning in the style of a bright prospect. #HKracing pic.twitter.com/KyQFsUfCjY

Beauty keeps rising up the rankings

The reigning Horse of the Year has gone to a different level so far this season with two dominant wins in handicap races, where he was giving weight to the rest of his rivals.

Mighty Australian mare Winx and Britain’s Cracksman share top billing with a rating of 130, while another dirt horse in Gun Runner holds third on 128. Poet’s Word and Roaring Lion are next in line on 127. 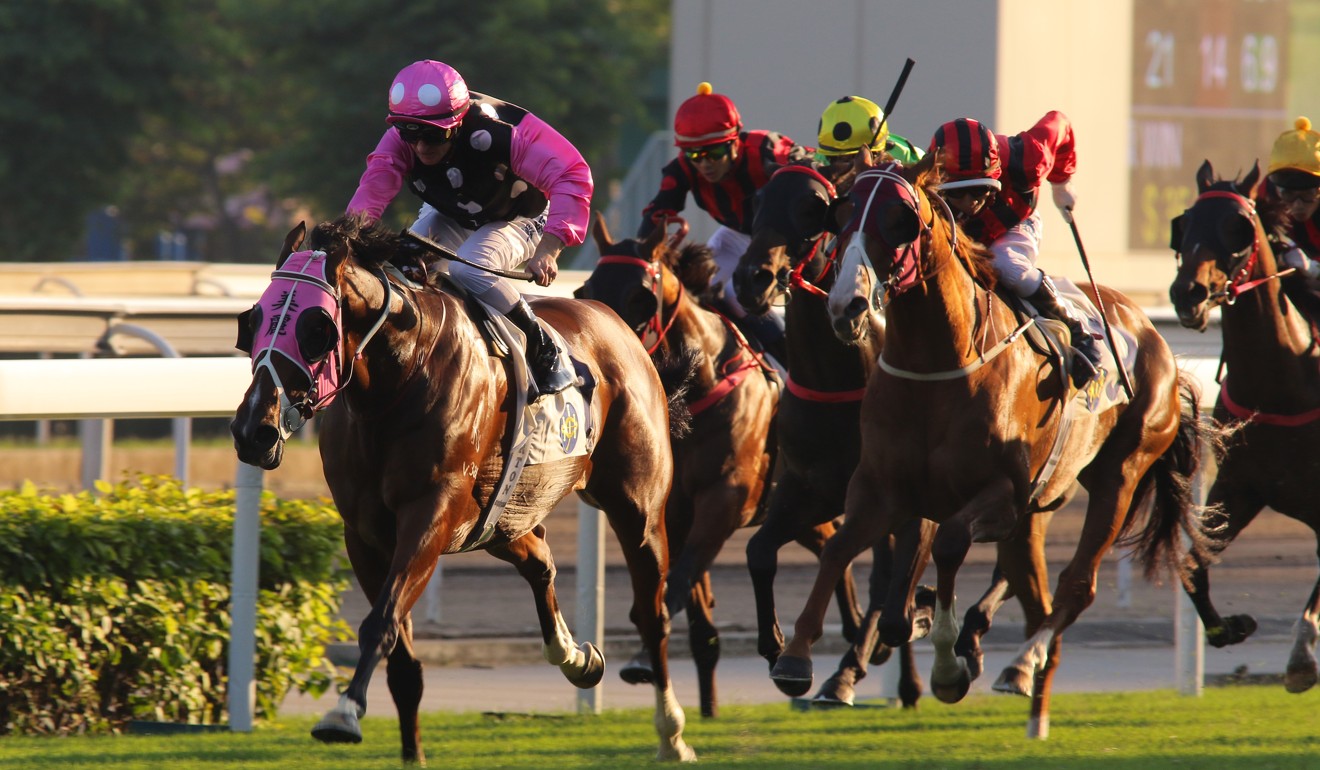 “Beauty Generation has improved throughout his career in Hong Kong, and has developed into a high-class miler,” Jockey Club chief handicapper Nigel Gray, who is also the co-chairman of the World’s Best Racehorse Rankings Committee, said.

“He’s been impressive in his two victories this season, giving weight and a beating to some very talented horses, and it’s great to see a Hong Kong horse back in the top 10.”

The six-year-old will step out again in next weekend’s Group Two Jockey Club Mile before trying to defend his Hong Kong Mile title in December. 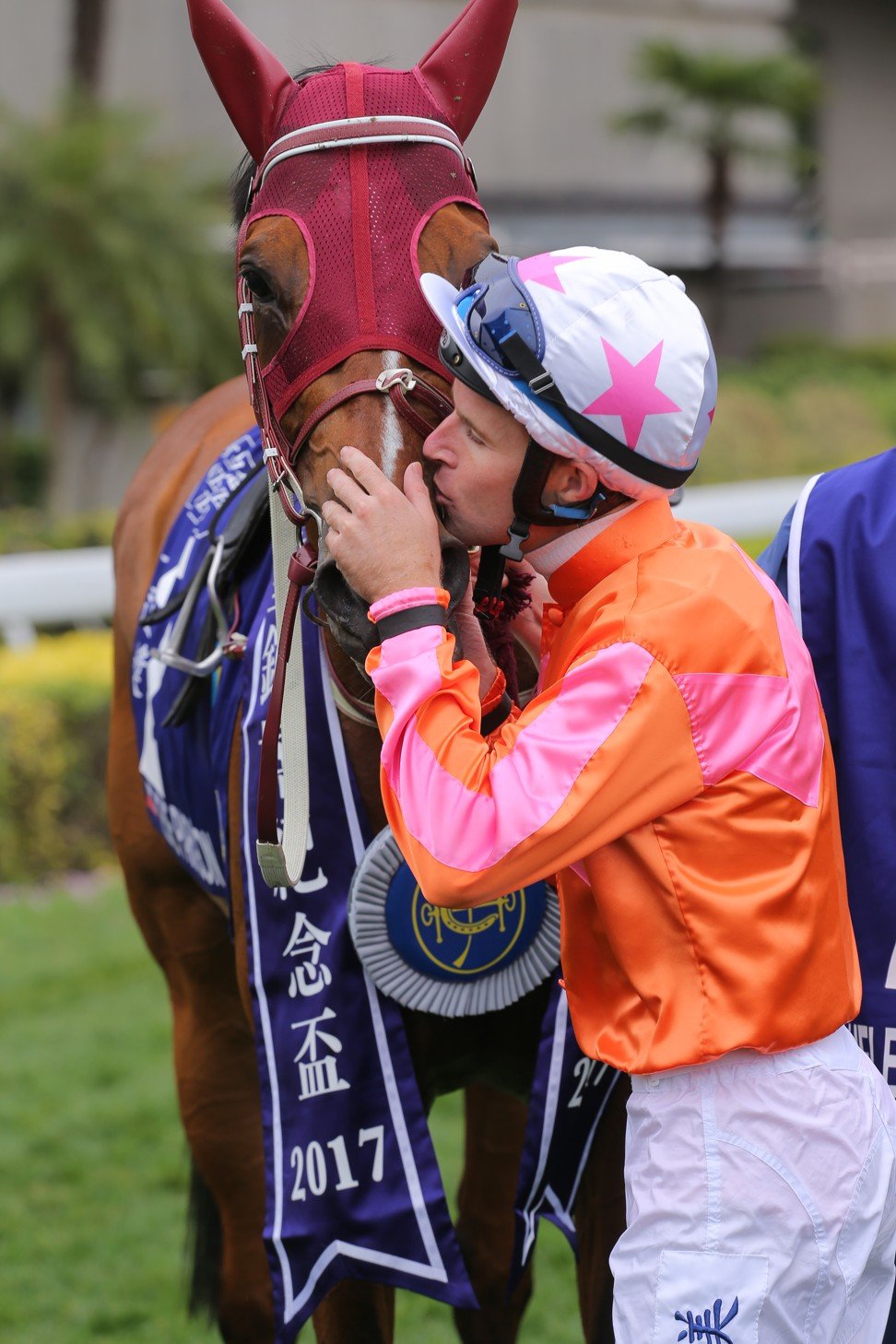 Speaking of multiple Group One winners from the Moore stable, Helene Paragon was retired this week.

The miler enjoyed a purple patch of form during the 2016-17 season when he took out the Stewards’ Cup and Queen’s Silver Jubilee Cup after finishing second in the Hong Kong Mile.

The entire was still competitive early last season – he again placed in the Hong Kong Mile – but he suffered a suspensory injury as he was building up to his first start of this campaign.

“We tried our best, but age caught up with him and in turn soundness,” Moore said. “The idea is to get him a home as a stallion, maybe in France, so that’s what we’re trying to do now.

“He was a very decent acquisition, he held a track record here for a while, he was very genuine and always hit the line.”

Helene Paragon came a long way from winning his first race at San Sebastian in Spain when known as Sir Andrew and going on to place in the Group One Prix Jean Prat, before making the move to Hong Kong where he won six of his 25 starts (placing seven times) to collect almost HK$30 million in prize money.